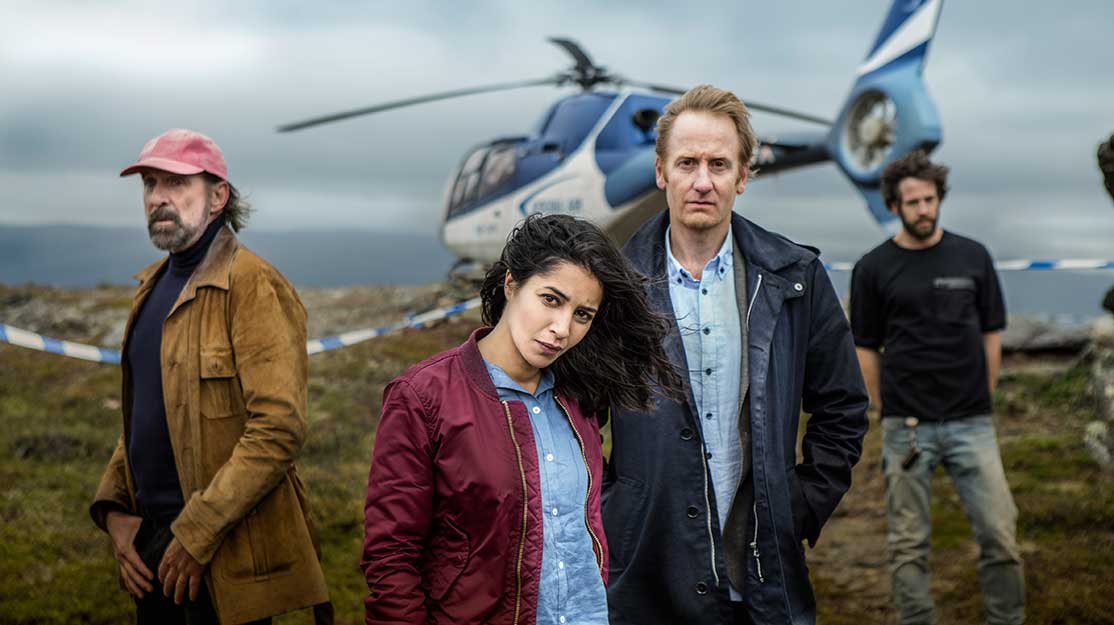 Land of the Midnight Sun

While locations often bring a series to life, few had as much impact as the setting of Midnight Sun, both on and off screen, as the drama’s leading actors tell DQ.

The midnight sun is a natural phenomenon that occurs each summer north of the Arctic circle and south of the Antarctic circle, where the sun is still visible at midnight. Around the summer solstice, there is 24 hours of daylight.

On television, it has been the subject of an episode of Canadian drama Northern Exposure, which examined the impact of the midnight sun on the residents of an Alaskan town, and an episode of The Twilight Zone, whereby the effect was created when the Earth was put on collision course with the sun.

The setting was taken to the extreme on Swedish-French coproduction Midnight Sun, known locally as Midnattssol and Jour Polaire respectively and currently airing in the UK on Sky Atlantic following a deal with distributor StudioCanal. The story sees French police officer Kahina Zadi (played by Leïla Bekhti) travel to Kiruna, the northernmost town in Sweden, to investigate the brutal murder of a French citizen during the midnight sun period.

With the help of Swedish DA Anders Harnesk (Gustaf Hammarsten) and a member of the Sami (Sofia Jannok), a local indigenous tribe, she comes to realise the killing and more that follow are part of a 10-year conspiracy involving many of the town’s inhabitants.

The series, produced by Nice Drama and Atlantique Productions, comes from co-creators, writers and directors Måns Mårlind and Björn Stein, who were the main draw for Hammarsten (The Girl with the Dragon Tattoo) to sign up for the eight-episode series.

“Sweden is a small country so if there are talented directors, you know them or know of them. I had wanted to work with Måns and Björn for a long time because I respect them,” the actor tells DQ. “Then they asked me to read something and I was just thinking, ‘Yes please.’ And when I read it, I was even more pleased because they had something really fantastic and special. I was really happy.

“Some things just look good on the paper but the way they worked, it was very important to keep it local and not make it too flashy. For an actor, that’s fantastic. You know you have a good part and there is fantastic scenery around.”

The appearance of the Sami people in a story set in their homeland, located inside the Arctic Circle, was also an attractive proposition for Jannok, who is herself a member of the indigenous tribe.

“Sami is a small community and we had been hearing about these guys doing research for a couple of years, so I knew they had done their homework and I had seen who they had been speaking to,” Jannok reveals. “That’s why I thought it was an interesting project – it gives an image of today and brings issues to the surface that aren’t talked about ever, like the racism against Sami people. People started to debate these issues, both in Sami communities and in Sweden. That’s a bonus if you get people to think about not only the thriller story but also identity, diversity, the many languages and the collisions between the different characters.”

Hailing from the region where the series is shot, and with personal experience of the midnight sun phenomenon, Jannok believes it’s a breath of fresh air to see a story like this told in this unique landscape.

“For people who live there every day, it’s not extraordinary,” she says. “We don’t even have a word for it, it’s just the sun. It’s nice to change the perspective and to not always be in the capital or the cities.”

Hammarsten continues: “It would be very easy to make it a French-Swedish series where there’s a clash between the two cultures, but all of a sudden you go the third way. It’s almost like the landscape has its own part. It’s like the settings have a role.”

Bekhti adds: “The main character is nature and everything around it. This has somehow fed my role and my character. The scenery seems to be moving literally and figuratively as well, fermenting somehow, just as what’s happening to my character and this impression of endless day. It fed the character and invites the viewer to discover a new part of the world.”

French actor Bekhti admits she was particularly affected by working in the unique environment, describing the shoot – which took place during the midnight sun – as a “strong human experience.”

“I forgot where I was, I lost my bearings almost,” she explains. “I slept very little. But instead of being scared by the experience, I thought I would exploit it and make use of it for my character. It was an amazing experience to live there in that space, even if it was physically demanding. It gave more insight into my character and the location helped me.”

Hammarsten picks up: “Leila was the hero of this show. I could go home to my apartment in Stockholm in the weekends but she was up there all the time with the sun and these crazy Swedes! Leila was really up there on her own, so I felt she also needed me – we had a pact. I knew of Måns and Björn but I didn’t know who this French star was. But she’s totally down to earth and a fantastic actor.”

Despite the challenges of the setting, Hammarsten balks at the thought of filming the series anywhere else. “How could you shoot this in a studio?” he says. “Maybe you could if you had an enormous amount of money. For me, it was the same but less of a struggle. We were there for a long time, in the midnight sun. It gave us something.”

For Jannok, though the location may have been familiar, the task at hand was not, with Midnight Sun being her first acting job.

“The new thing for me was acting, that was the challenge,” she exclaims. “So I was glad I was being taken care of. Everyone was so nice and friendly. It was good doing my first time acting at home. I used to ski past the house of my character, so this was home. We don’t sleep during the summer! We’re better at sleeping during the dark winters, but it was nice being home.”

Though herself an experienced actor, with credits including The Prophet and All that Glitters, Bekhti also faced a new challenge when scenes called for her to speak in English – the shared language used by Swedish and French characters in the series, which also features the native Sami language.

“I didn’t speak English at all,” she says. “I was coached for two or three months, six hours a day. It meant I was really thrown into the deep end, I was immediately immersed in that character. I didn’t want to lose the actor’s part in it all. English was an instrument, so when I was frightened, the first thing that came out was in French. That meant it was more realistic.”

Midnight Sun made waves as the first ever French-Swedish coproduction, with many similar cross-border partnerships now in the works. It remains to be seen whether anyone else will attempt to stage another series in this dazzling environment.