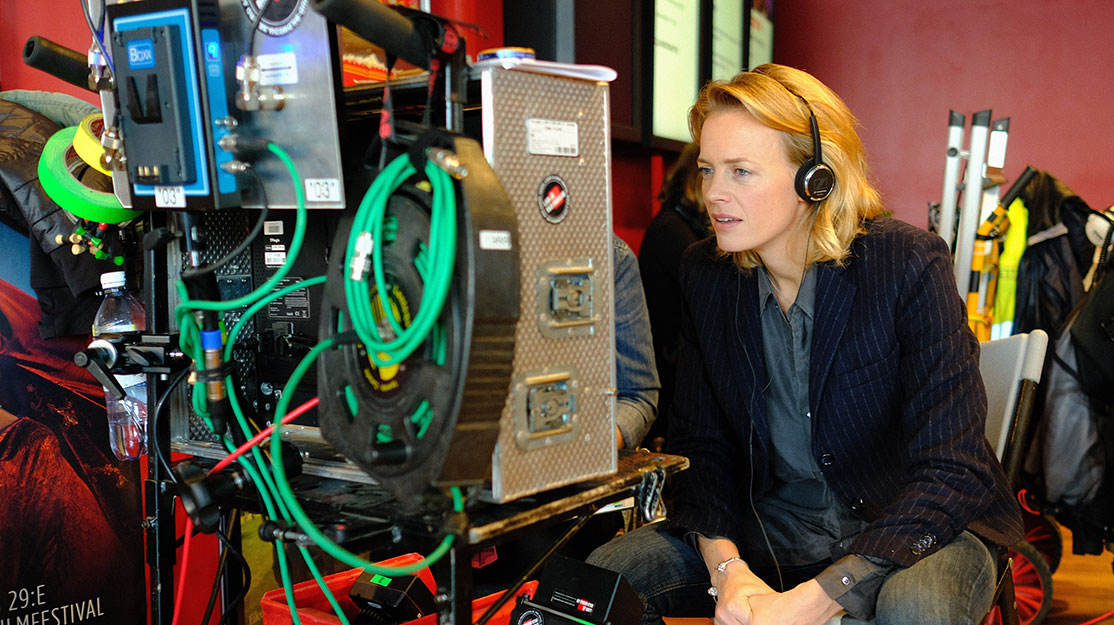 Swedish star Josphine Bornebusch speaks to DQ about her acting career, branching out behind the scenes, creating dramedy Love Me and how she juggles her multiple roles on set.

She is best known for playing Mickan in Solsidan, a comedy series about a couple who return to the man’s childhood town, which ran for six seasons between 2010 and 2019 and also spawned a movie; while she has also starred in Welcome to Sweden and, more recently, Love Me.

It’s the latter two productions that have also seen Bornebusch become a fully fledged multi-hyphenate. After cutting her teeth writing a script for Solsidan in 2013, she starred in, wrote on and produced Welcome to Sweden, about an American who quits his job and moves with his girlfriend to her native Sweden. She then created, wrote, directed and starred in Love Me.

Love Me tells the story of Clara (Bornebusch), a successful doctor searching for love, while also focusing on her father Sten, who is looking for a way to handle his grief, and her younger brother Aron, a hopeless romantic. Bornebusch also wrote and directed the dramedy.

Produced by Warner Bros International Television Production Sweden, it first premiered on Scandinavian streaming service Viaplay in October last year and was renewed for a second season that will debut this autumn. Season one will also air locally on pubcaster SVT this spring, while Dutch broadcaster NPO has become the first international channel to pick up the series, following a deal with distributor Eccho Rights.

Bornebusch is now prepping her next original series, country music drama Harmonica. Here, she tells DQ about her acting career, taking her first steps behind the camera and why Love Me is a show she would want to watch.

What kinds of projects are you attracted to as an actor?
I think every actor is looking for new characters to play. New challenges, new takes. That definitely applies to me.

Which roles have you enjoyed most in your career so far?
That’s a hard question to answer because it’s more about the projects themselves than the roles. But I’ve played one character for 10 years now in a show called Solsidan, so I guess that’s a role I’ve liked. But also Clara in Love Me, of course. I wrote that role for myself, so the lines are very close to how I speak. Characters that are truthful are the ones I like to play the most.

Solsidan ran for six seasons. Why do you think it was so successful?
I think it’s a combination of recognition, humour and obviously the kick-ass cast.

It originally aired between 2010 and 2015 but came back in 2019. What was it like returning to the series for season six after four years away from the small screen?
Well, we did a movie in between so it feels like we never really had a pause. After so many seasons together, it feels like a family reunion every time we meet.

Have you always had ambitions to write, direct and create your own series?
I think I have, but it took a while – many years, actually – for me to admit it. I guess I was scared. I mean, it’s not an easy thing to do, and I totally respect and admire all the creatives out there.

How did you come to write your first script for Solsidan and what was that experience like?
Oh, I don’t really remember. It was a while ago, but I think they asked me and I said, ‘How hard can it be?’ And then I realised that, wow, yeah, it’s really hard.

What did you learn from developing your first series, Welcome to Sweden?
That it’s hard, hard work. But I also learnt this is what I want to do! I have the best job in the world, and I hope I can keep on doing it for the rest of my life.

What were the origins of Love Me?
I wanted to make the kind of series that I wanted to watch myself. In Sweden, we don’t have many stories of this genre – a romantic drama with a touch of humour. So I tried to make that kind of show, since I felt it was missing.
At first, I started developing a show about the Clara character. After years of working with her as a sole main character, I got the idea to add her father and brother as main roles. After that, I really found the core of the story and it all fell into place.

How would you describe Clara?
Clara is an almost 40-year-old obstetrician longing to have children of her own and to find a man to start that family with. She can be sarcastic and a bit harsh sometimes, but she’s also charismatic and sincere.

What are the themes or issues you wanted to talk about and how did you tackle them?
Fist of all, the show is about love – what it feels like to long for it, to get it and also to lose it. We also have storylines about the loss of a family member and the grief that comes afterwards.
I wanted to tackle these emotions in a natural and authentic way. Sometimes, for example, you laugh in the deepest sorrow as well as feel ambivalent when faced with love.

How do you combine your roles of writer, director and actor? Or do you keep them separate?
Whenever I’m in a stage of writing, I feel that is the best part. But then when I go on set and I get to direct and act, I change my mind and think that stage is even more fun. When I’m in the editing room later, I once again have the impression that step is tremendous.
Writing comes first and is, most of the time, finished before shooting, so that part is not so hard to separate from the rest of the process. I get caught up in the moment and forget that I’m the one who is actually going to have to be there on set and make all everything happen.
The directing and acting is fine to separate; I’ve acted a lot before and I get a sense of when we have the scene. I can then go to the monitor and watch the playback just to check it is what I thought. I have a great crew around me that I trust, and we’ve spent a lot of time preparing, so when we’re on set it flows well.

What are the biggest challenges in juggling different roles?
The biggest challenge is during pre-production. When we have a rewrite that needs to get done at the same time as working with location scouts and attending all the meetings, I do sometimes get the feeling that it would be great to have a clone!

Your latest project is Harmonica. What can you tell us about it?
Harmonica is about married couple Harry and Monica. They were top of the pops in the 1990s, but their life as the country music duo Harmonica has been out of key ever since, as well as their deteriorating marriage.
In an effort to salvage their failing financial situation, the couple embark on a nostalgia tour of Europe with their old band, which brings their problems to a crescendo but also offers them a chance to find harmony together at last.
Harmonica is a six-episode series co-written and co-directed by me and Jonas Karlsson. It’s produced by Warner Bros International Television Production Sweden for NENT Group’s streaming service Viaplay. We start shooting this month.

Why was this a story you wanted to tell?
Almost all love stories start with ‘boy meets girl.’ With this story, Jonas and I wanted to tell the story of a couple in their 40s and show the heartache of a marriage where you just cannot connect any more.

Where do you see your future – acting, writing, directing or a combination of all three?
As long as I can have this luxury of getting to write, direct and act, I will definitely continue to create this way, where I get to do the different roles for the same project. In addition to that, I’m more than open to do just one of those roles if the right project comes along.