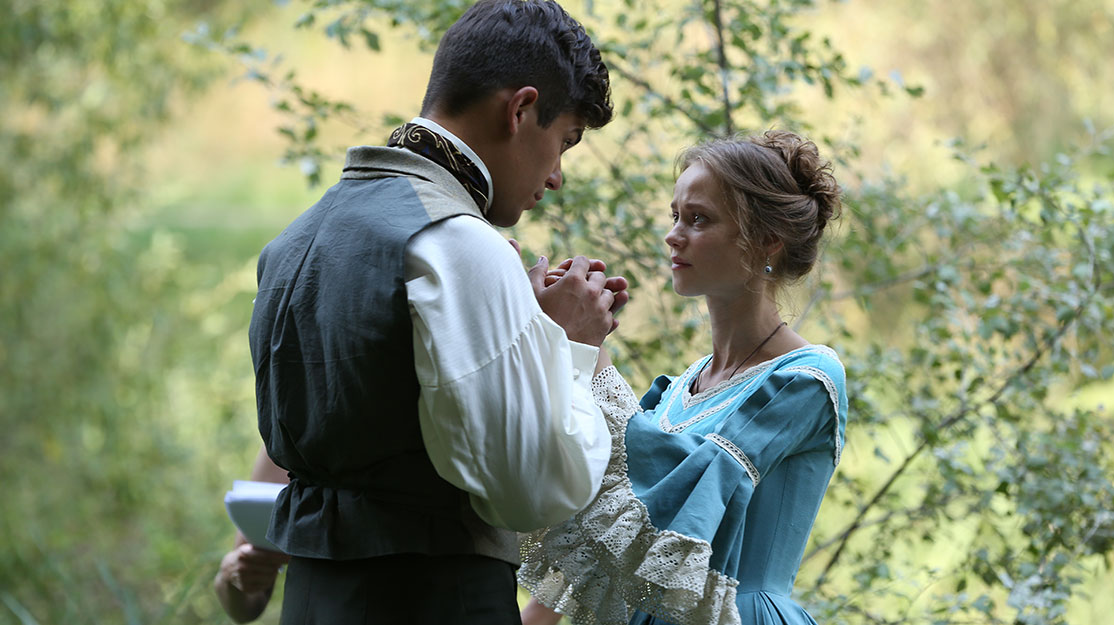 Tala Prystaetska, creative director of Ukrainian period drama Love in Chains, describes the challenge of making this ambitious 48-part series and why it has found success at home and abroad.

During a production schedule spanning 12 months, more than 230 actors worked across 254 shooting days – and 50 night shoots – to bring Ukrainian period drama Love in Chains to the screen.

The 48-parter stars Kateryna Kovalchuk as Kateryna, who was raised by her godmother as a lady of noble blood but to the world is the property of the richest landowner in Nizhyn, Petro Chervinskyi (Stanislav Boklan). Struggling for her freedom and happiness, she will have to endure abuse, the deaths of her closest friends, and survive an uprising for the chance to escape.

Produced by Film UA and Starlight Media, the series broke viewing records when it debuted on Ukraine’s STB this spring and also became a hit series for Poland’s TVP1. It is distributed by Film UA.

Here, creative director Tala Prystaetska outlines the ambitious concept for the drama, the search for a star and why she thinks the show has resonated in multiple countries.

What was the concept for the series and how was it developed?
We sought to create a layered, multi-character ‘novel,’ not just a telenovela. We wanted the viewer to be immersed in the story in the same way they used to be in novels by Alexandre Dumas, George Sand and Maurice Druon.
We were not interested in a predictable tale of love. We wanted to create a real world where passions would rage. And like a novel, the story was supposed to engage completely different audiences.

How was Kateryna Kovalchuk cast?
The search was long and difficult. Our main character had to combine innocence and passion; fragility and strength. Casting took over six months and more than 100 actors auditioned for the role, including one from Scandinavia. In the end, Kateryna, who has also acted in the US, scored the part. She managed to bring everything the scriptwriters had intended for the character.

How did you select the locations?
The team travelled all over Ukraine. We needed the architecture to not only reflect the era but also play up the traits of our characters, mirror their storylines and be technologically suitable for filming.
The most difficult was the mansion of Lydia Schaefer (Kseniya Mishyna). The building, according to the plot, is burned down during an uprising. After a while, different characters come back to the burnt estate over the course of the story. We chose the Chechel estate in the Khmelnitsky region – a magnificent mansion with formal gardens.
Naturally, a fire or even its imitation were out of question. But thanks to CGI and the efforts of our set designers, we could realise everything in the script without sacrificing the real building.

How would you describe the visual style of the show?
The period we have chosen has left its mark on the show’s visual identity. The style of a lot of frames was inspired compositionally by famous old paintings. This was the principle our DOPs Serhiy Revutskyi and Oleksiy Lamakh applied to most wide shots. The picturesque beauty and full immersion into the emotions of the characters with the help of expressive close-ups were the two key visual principles.

What is the biggest challenge filming a 48-part drama?
Preserving our sanity! I’m joking, but only partly. The long production period, non-linear schedule, huge number of story twists and large cast of characters required constant concentration and unending focus. Continuity was key – between two adjacent scenes, a whole year could have passed in real life.
For example, in the 28th episode there are riot scenes and the Schäfer mansion is set on fire. We filmed that in September 2017, whereas the scenes of Lydia rushing around in angst during the riot were filmed in August 2018.

Why has the series been so popular in Poland and Ukraine?
We achieved our goal of creating a story that captivates viewers in the same way the best novels captivate readers. Viewers were immersed in the story and rooting for their favourite characters. The values, traditions and rituals in the show form part of the cultural code of the Eastern European audience, while modern viewers can relate to the problems Love in Chains addresses, such as abuse, difficult family dynamics and post-traumatic stress disorder.
The relevance and timelessness of our dramatic elements played a vital role in the success of our project.