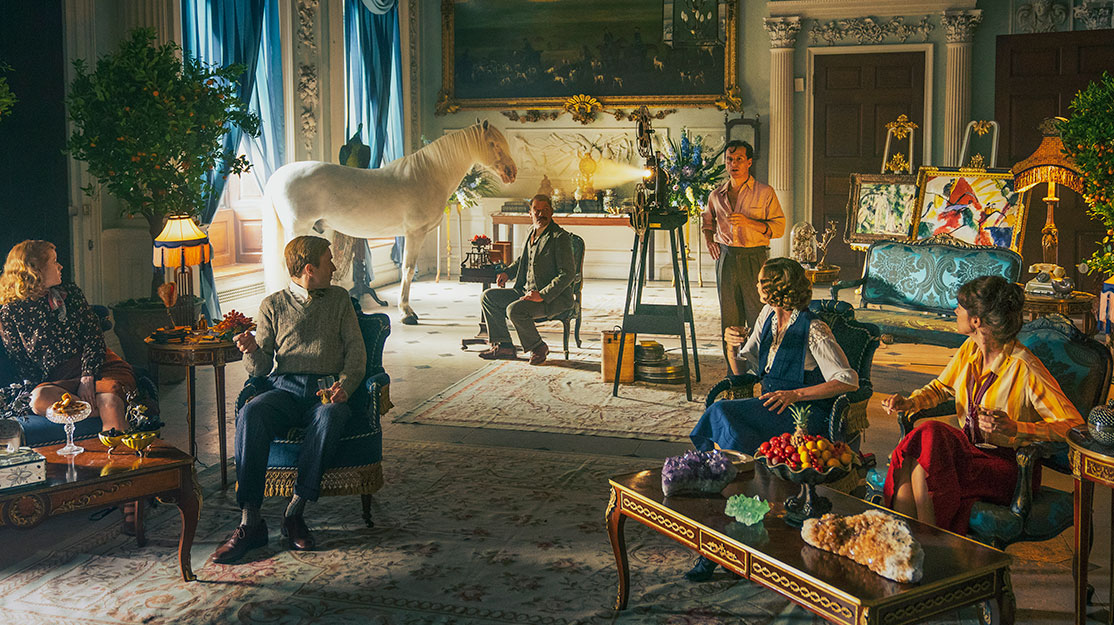 Mary Poppins Returns star Emily Mortimer opens up about writing and directing The Pursuit of Love for the BBC and Amazon, adapting Nancy Mitford’s novel and why she wanted to fire herself.

Before production began on The Pursuit of Love, writer-director Emily Mortimer wanted to fire herself. Best known for acting roles in Lovely & Amazing, Lars & the Real Girl and Mary Poppins Returns, Mortimer also appears on screen in the BBC and Amazon’s three-part miniseries.

But the self-deprecating star admits she didn’t really want to be in it, calling the challenge of directing herself the “worst part of the entire experience.”

“I tried to fire myself just before we started filming because I just was like, ‘I can’t do this,’” she tells DQ after completing a day of filming. “When it came to getting ready to shoot, I was desperate to get out of it, and I tried to fire myself and I wasn’t allowed to. Apparently it’s in my contract. But the least comfortable I felt was when I was directing myself because it was like sending something out to sea.

“As an actor, I’m full of self-disgust at the best of times. That’s the experience of being an actor. You really just hate yourself and everything you do. And then when you’re directing yourself at the same time, the self-loathing thing skyrocketed to extreme levels, especially running back and forth from the monitor in a wig and feeling like, ‘Oh, this is just too much, I’ve bitten off more than I can chew.’ But luckily, I’m only in it for a few scenes. But if I could have done, I would have fired myself.”

It follows the adventures and misadventures of the charismatic and fearless Linda Radlett (James) and her best friend and cousin, Fanny Logan (Beecham). The two women are on the hunt for the ideal husband, but their friendship is put to the test when Fanny settles for a steady life and Linda decides to follow her heart – to increasingly wild and outrageous places. As social and political divisions split the nation, their diverging choices raise personal questions about freedom, love, sex and the mystery of the human heart.

West and Wells play Linda’s parents, Uncle Matthew and Aunt Sadie Radlett; Scott is the Radlett’s eccentric neighbour, Lord Merlin; Beattie Edmondson plays Louisa Radlett; and Mortimer plays Fanny’s mother, who is known as The Bolter. Distributed by BBC Studios, the BBC1 drama is produced by Open Book and Moonage Pictures, with Amazon Studios coproducing for the US, Canada, Australia and New Zealand.

Mortimer had read Mitford’s novel as a teenager and says the story and Hons & Rebels, the memoir by Nancy’s communist sister Jessica, both stayed with her as she launched her acting career and then moved to the US.

“Living in America, they were part of my cultural memory of England,” she recalls. “I’d carry Hons & Rebels around and give it to people as a Christmas present or birthday present and buy it in bulk. It immediately felt like something familiar and when I was asked to adapt to The Pursuit of Love, I was just so struck by reading it as a 40-whatever-year-old all those years later and our culture having changed so dramatically and life having got so fast and furious.

“Nancy Mitford was growing up between the wars in England and it really feels radical and really shocking, funny and unafraid. There’s an absurdity to it and a remorseless lack of earnestness to it, which is bracing, and it’s incredibly non-judgemental. It’s a satire in a way, and just incredibly honest about love and what it is to be a woman. It’s unfettered by saying the wrong things, it’s just being honest.”

Mortimer says she was looking for a project that swims against the tide in a world full of judgement and moral certainty. “When you look at your Twitter feed or your Instagram feed, everybody’s certain about what they think and what’s right and what’s wrong,” she continues. “You just meet all this moral certitude everywhere you look and it’s difficult in this moment to embrace a lack of certainty, confusion or nuance. It’s quite scary to take that position. Whereas Nancy Mitford is very brave about being honest about life and satirising everybody.

“Linda, in her relentless pursuit of love, goes from a kind of fascist banker to a communist activist, so her love life somehow is a satire of the times and the men at the time, and they’re both as self-obsessed and self-involved as each other. I like the fact Nancy gives equal weight to death, rejecting your children, postnatal depression, corporal abuse, PTSD, what dresses to wear at parties and how sweet the Labrador is. Everything is given equal weight, and that feels quite radical to me at this moment.”

Though it deals with tough themes and storylines, the comedy in the series comes from “the painful absurdity of life, which is just how life is,” Mortimer adds. “It’s part absurd, ridiculous, funny, joyful and painful, miserable, scary, confusing and lonely. That’s the balance I’ve liked. That’s what being alive is like. Hopefully it’s got a mixture of those in the same way as my experience of life.”

While directing might be something new for Mortimer, the actor previously created and wrote Sky comedy-drama Doll & Em with her real-life best friend Wells and director Azazel Jacobs. The series, which ran for two seasons between 2014 and 2015 and was picked up by HBO, told the story of an actress who hired her best friend as her assistant.

The Newsroom star also runs King Bee Productions with her husband, actor Alessandro Nivola (Chimerica), with whom she produced 2018 feature To Dust, about a Hasidic cantor left distraught by the untimely death of his wife.

On both projects, Mortimer became involved in all aspects of production, a process she says edged her closer to directing herself before Wells beat her to it, helming 2019 comedy-drama Good Posture, starring Mortimer and Grace Van Patten in the story of a young woman who moves in with her father’s friend.

“I was so impressed by her doing it and amazed by her. I don’t know whether that made me think, ‘Maybe I could,’ but I know that as I was writing [The Pursuit of Love], I found I was writing it very visually,” Mortimer says. “I was writing it like I knew how I wanted the experience of watching it to be. When it came to starting to have conversations about how it should look and the tone and the vibe, I knew all the answers. And that’s when it started to become more of a possibility and clear that maybe I could do it and maybe I should.

Despite her concerns about appearing in her own series, Mortimer says watching her cast in action has given her a newfound respect for acting.

“As an actor, I always feel just mortified by myself and just think, ‘What is it I’m doing and who am I?’ But when you’re watching on the monitors, I was taken aback by how moved I was and amazed by what it is they do every day,” she says. “ I always used to feel we’re coddled as actors. We’re all treated like the cat’s pyjamas and we get given pocket money, driven around in cars and somebody wakes us up in the morning and gives us a cup of tea. I thought, ‘Why are we treated like such kings and queens?’ But now I’m on the other side, I do realise, of all the jobs that anyone’s doing, what those guys are doing is definitely the most important.

“Unless they can feel something in that moment and make us feel something when the cameras are rolling, nothing else matters. The sets, the costumes, the beautiful scenery, the make-up, the lighting – none of it matters unless something real is happening at the moment ‘action’ is called between the people standing there pretending to be those people. I’ve just got such deep, newfound respect and admiration for what actors do, having stepped to the other side of the camera. But then again, I couldn’t have got more extraordinary actors to be doing this. It really is a privilege to watch them.”

Mortimer’s debut hasn’t been without its challenges, however, and they don’t come any bigger than filming during a global pandemic. When filming began in and around the English cities of Bristol and Bath in July, a comprehensive set of production protocols were put in place to ensure shooting could continue on schedule ahead of wrapping this month. The series is due to debut next year on BBC1 and BBC iPlayer in the UK and on Amazon Prime Video in the US, Canada, Australia and New Zealand.

Despite the difficult shooting conditions, Mortimer says completing the show has been all the sweeter for the challenges the cast and crew have overcome.

“Everybody feels very lucky to be working in the middle of all of this, and there’s a sweetness and a camaraderie to it that is really lovely. We’re all in it together,” she says. “There’s a good vibe to it. I don’t know how much of that is just that there are some really lovely people working together on it. That is definitely true, but also it’s true we all feel lucky to be working and I’m grateful to be here.”

Mortimer says she has enjoyed building Mitford’s world for the screen and now hopes to have the opportunity to direct again alongside her continuing acting career.

“I feel like what I’ve tried to do with this is give people a treat. I feel like people really deserve a treat,” she says. “That’s not to say I don’t want this to be honest at times and difficult and painful and everything like that. It’s still a treat nonetheless, as it should be when you open a book, turn on the television or go to the movies. No matter what you’re seeing, it should be a treat, and so I have enjoyed the feeling of wanting to give people a treat and being given the opportunity to try to do that.

“Once I’ve edited it, finished it and people have seen it, if they like it then maybe I’ll try again.”