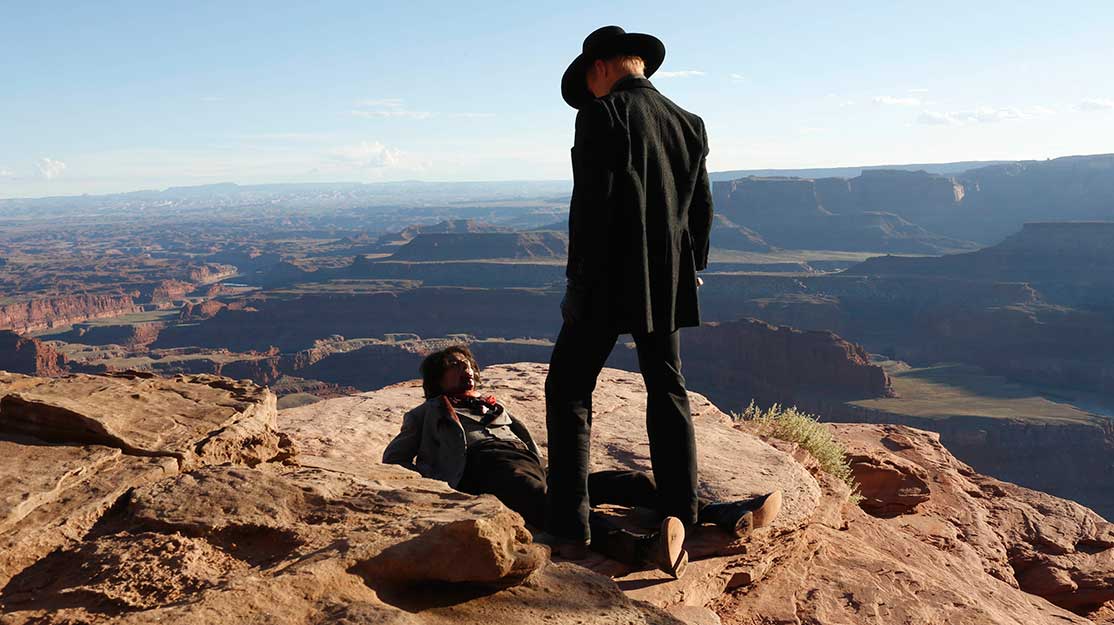 Kings of the wild frontier

Period dramas are never far from our screens, but they currently appear to be more popular and diverse than ever. Stephen Arnell examines the current trend for costume series.

Drama series based on historical events and set in eras gone by have always been popular, more so than ever in the current ‘golden age’ of television, despite the obvious expense involved in terms of scale, design, costuming and on- and off-screen talent.

The American West has long yielded rich pickings for both period series, most recently with Hell on Wheels (AMC, 2011-16), and those with a more contemporary setting, including Longmire (A+E/Netflix, 2012-present) the much-admired Justified (FX, 2010-15), and the western/sci-fi hybrid Westworld (HBO, 2016, pictured above).

Cinemax’s Banshee (2013-16) should also qualify as part of the genre, as, notwithstanding its present-day Amish Pennsylvania backdrop, the show possesses a narrative that harks back to the ‘psychological’ westerns of the 1950s, including Johnny Guitar (Nicholas Ray, 1954), 3:10 to Yuma (Delmer Davies, 1957), Warlock (Edward Dmytryk, 1959) and Marlon Brando’s sole directorial effort One-Eyed Jacks (1960).

Last year the UK’s ITV attempted to inject western DNA into 1870s Yorkshire with the viaduct-building drama Jericho, but poor ratings saw it fail to gain a second season.

The granddaddy of the western TV series since the 1990s is, of course, HBO’s Deadwood (2004-06), which despite being cancelled in season three retains a huge affection among the cognoscenti, enough perhaps for the mooted one- or two-part TV movie conclusion to the show to finally be given the nod.

As of August 2016, Deadwood creator David Milch was reported to be working on a script that aims to bring some sense of closure to the show.

The contemporary strain of western will see a new entrant into the field this year with Sky Atlantic’s Tin Star, a revenge thriller located in the Rocky Mountains of Canada, starring the always-busy Tim Roth (Rillington Place, The Hateful Eight) as a former London Met detective now plying his trade as a law officer in the previously sleepy but now crime-ridden town of Little Big Bear.

After the ratings failure of The Young Pope in the UK, Sky Atlantic must be hoping that Tin Star can stake a larger claim for the potential audience, with a narrative that appears more immediately appealing than what some felt were the arthouse affectations and longueurs of the Jude Law starrer.

Another area that appears popular is the ‘pre-western,’ generally taken to be the New World in North America before the Civil War (1861-1865).

The success of 2015’s endurance epic The Revenant may have given some inspiration for new dramas to explore the times before the ‘Classic American West’ period of 1865-1900, set as it was in the ‘unorganised territory’ of the 1820s.

At first glance, Jamestown, located in the North America of 1619 among the first English settlers, owes something to some relatively recent dramas, including Terence Malick’s film A New World (2005), Peter Flannery’s New Worlds (Channel 4, 2014) and Jimmy McGovern’s Banished (BBC2, 2015).

Strong similarities also appear noticeable between Banished (based in a New South Wales penal colony of 1788) and Jamestown, in the narrative hook of having both the predominately male inhabitants of the two communities learning to deal with an influx of women into their lives.

The recent teaser trailer released for Jamestown suggests creator Bill Gallagher (The Paradise, Lark Rise to Candleford) will be a taking a slightly less gritty approach than that adopted for Banished.

As for the Jacobean setting of the show, UK producers have a mixed record with dramatic depictions of the Stuart era, with successes including Charles II: The Power & The Passion (BBC1, 2003), Gunpowder, Treason & Plot (BBC2, 2004) and The Devil’s Whore (C4, 2008).

But less popular were the aforementioned New Worlds (C4, 2014) – a sequel to The Devil’s Whore set in 1680s colonial Massachusetts (61 years on from Jamestown’s Virginia) – and ITV’s The Great Fire (2014), which to many critics was more of a damp squib than a raging inferno.

Anyone expecting a gruelling Revenant-style experience may be disappointed, as the trailer gives the impression of a fairly uncomplicated period action-adventure, a few shades less complex than, say, Black Sails (returning to Starz for its fourth and final season this month).

The Revenant star Tom Hardy’s eagerly anticipated period drama Taboo made its January 7 debut in an unusual Saturday peaktime slot for BBC1, unusual in that light entertainment and other less-demanding fare tends to dominate the evening.

BBC1 chief Charlotte Moore will be hoping the gamble pays off and viewers stick around for something more full-blooded than they’re used to on the channel at that time.

And on the evidence of the overnight ratings for Taboo’s debut (4.8 million viewers and a 22.9% audience share), there is certainly some justification for its scheduling, which was fortunate in going against weak opposition. The performance of subsequent episodes will be the real test.

From the evidence of the trailer and to the likely pleasure of his legions of fans, Hardy seems to be in his default pyscho/masochist mode in the show, which will be familiar to viewers from his previous work in The Revenant, Bronson, The Dark Knight Rises and Peaky Blinders, the latter produced by Taboo co-creator Steven Knight.

In contrast to Frontier, where the villains are the Hudson Bay Company, the corporate bad guys in Taboo are the 1814 iteration of the East India Company.

Other interesting period dramas coming up in 2017 include season two of the Sean Bean starrer The Frankenstein Chronicles (ITV Encore), which may help assuage some pangs for the loss of Penny Dreadful, and the same channel’s Harlots, with Samantha Morton (Rillington Place) as a brothel keeper in Georgian London, set a few years earlier but in the same locale as Bean’s show.

Away from the grime and fog of London, fans of costumed spectacle can also look forward to BBC2 epic Troy: Fall of a City; the Roman drama Britannia (Sky1); Les Misérables (BBC1); season two of The Last Kingdom (BBC2); the final season of Reign (The CW); The White Princess, the belated follow-up to The White Queen (Starz); Julian Fellowes’ The Gilded Age (NBC); The Alienist (TNT); and Ridley Scott’s The Terror (AMC).