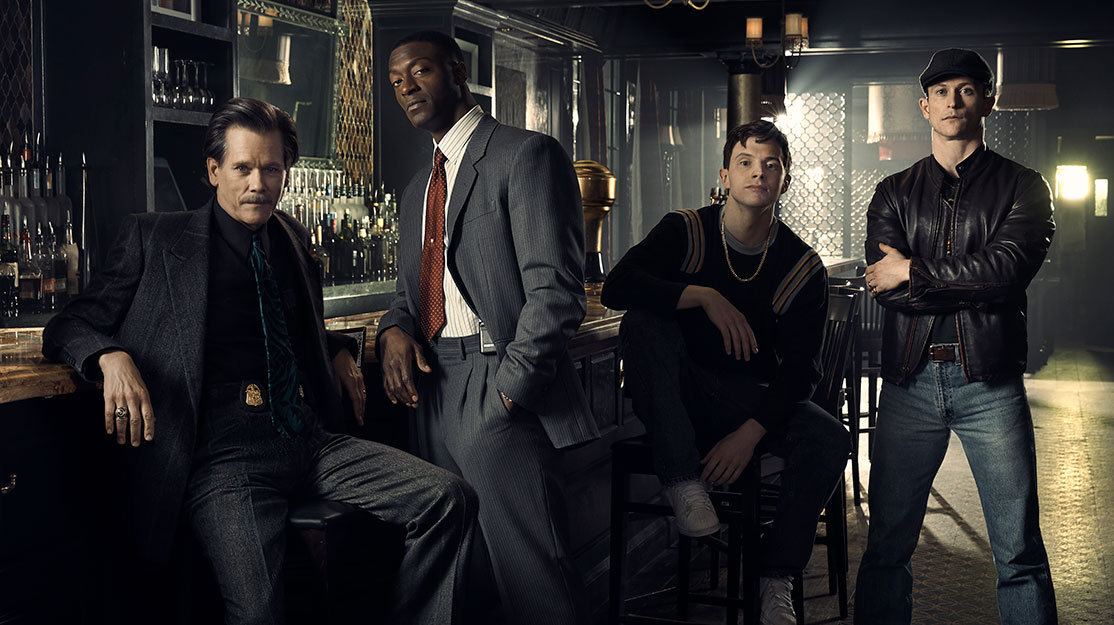 King of the Hill

Veteran showrunner Tom Fontana tells DQ how his latest series, Showtime’s City on a Hill, tackles uncomfortable issues and explains why the 1990s-set show speaks to the present day.

For more than three decades, Tom Fontana has been associated with some of the most iconic series in US television. From medical drama St Elsewhere to The Wire precursor Homicide: Life on the Street and groundbreaking HBO prison drama Oz, he has scored multiple award wins and nominations while building a reputation as an international showrunner on historical drama Borgia.

“I’m still doing what I’ve been doing for 30 years,” he says. “Technology continues just to evolve and become more and more awesome. You can do things you couldn’t do years ago. But in terms of storytelling, the inherent conflicts and the inherent character flaws of the people we’re writing, when you’re writing human beings, they’ve been doing it the same way since Zebedee.”

In every storied career, no matter how long, there’s always time for new experiences and that’s exactly what Fontana has found with his latest project, showrunning Showtime’s crime drama City On A Hill.

Created by Chuck MacLean and based on an idea by Ben Affleck, who exec produces with Matt Damon, the series marks the first time Fontana has run a series he wasn’t attached to from the outset.

“Even with Homicide, on which Paul Attanasio wrote the initial script, I was involved from the very beginning in terms of casting and the whole evolution of the concept,” he explains. “With this, there was a pilot that was finished [when I joined]. We did go back and do some reshoots and reorganisation of it, but the cast was set and the heart of the series was set because Chuck is a brilliant writer. He has a very specific ear for what is Boston, so what I’ve tried to do, because he’s never done a television show before, is to be more like an Obi-Wan Kenobi on this and not change his concept. I’ve tried to enhance it.”

The 10-episode series is set in early 1990s Boston, a city rife with violent criminals emboldened by local law enforcement agencies among which corruption and racism was the norm. Described as a fictional story set during this period, the show sees assistant district attorney Decourcy Ward (Aldis Hodge) arrive from Brooklyn and form an unlikely alliance with corrupt yet venerated FBI veteran Jackie Rohr (Kevin Bacon). Together, they take on a family of armoured car robbers from Charlestown in a case that grows to involve, and ultimately subvert, the entire criminal justice system of Boston.

Produced by Showtime and distributed by CBS Studios International, the series has been selected as the closing-night premiere at the ATX Festival in Austin, Texas, tomorrow, ahead of its US launch on June 16. Alongside Fontana, Affleck and Damon, the executive producers include Jennifer Todd, Michael Cuesta, James Mangold and Barry Levinson. Bacon is a co-executive producer.

“I think [the series appealed] because I like to do shows that are troubling and deal with issues people maybe aren’t comfortable dealing with,” Fontana tells DQ on the phone from New York City, while filming is continuing on episode nine and he is editing episode eight. “I felt in this world we live in, and specifically in America in 2019, what was going on in Boston in the 1990s was incredibly on point as to what’s going on in America right now. So for me, the idea was that while we could be in the haze of doing a ‘period piece,’ we could deal with a lot of questions and confusion that exist in our lives today.”

While the idea of a period drama set in the 1990s might seem troubling to those who feel like they were only recently living in that decade, at the heart of City on a Hill is a question that remains as relevant today as it did then and even decades earlier: what is justice? The show aims to interrogate that topic not just on a legal level but also by examining how people are treated either justly or unjustly and how this is affected by wealth, race or sexuality.

“So from what Chuck created and the characters he created, we sat down and we talked about real events that happened in Boston in this period and how they might ignite these characters into the journey they’re individually going to take during the course of the season.”

This isn’t Fontana’s first time in Boston, with St Elsewhere also set in the Massachusetts city. But he says that the city serves the same purpose as Baltimore did in Homicide, being specific to its location but universal in the way it captures an American city metropolis.

“Boston is unique unto itself because it’s the birthplace of the Revolutionary War [which led to American independence from British rule], but also because, over time, it has remained both a small town and a large city,” he says. “It suffers and celebrates both those elements. It’s a small town in the sense that people are very tied to their neighbourhoods, tied to their beliefs and tied to their prejudices, but it’s also a city that is the centre of a lot of medical research and the Harvard Kennedy School of political science. It has big stakes as well as little stakes.”

The pilot was filmed in Boston and the crew will return there for the season finale, with other locations sought further down the Eastern Seaboard in the New York State areas of Staten Island, Yonkers and White Plains. Interior scenes were filmed on sound stages.

“Like Mad Men, the show is 90% interiors. So whether we were shooting it in a sound stage in Brooklyn or a sound stage in Boston, it really didn’t matter,” Fontana notes. “And a lot of Boston in 1992, specifically the neighbourhoods we’re dealing with, don’t exist anymore in the sense that they have been gentrified, so we have managed to find places that look like Boston in 1992.”

Fontana’s experience on crime dramas in particular has seen him work on series such as Homicide, which was based on the book Homicide: A Year on the Killing Streets by David Simon and ran on NBC from 1993 to 1999. The book would also later inspire Simon to create HBO’s seminal drama The Wire.

Fontana also created Copper, a police procedural set in 1860s New York that would become BBC America’s first original drama when it debuted in 2012, and short-lived drama The Beat, while he has also explored the criminal justice system in Oz and courtroom-based The Jury.

City on a Hill moves away from the typical police procedural format, telling stories not just from the perspective of the cops of Boston Police Department but also the FBI, the county sheriff, state troopers, the district attorney’s office and a group of criminals hellbent on targeting cash-carrying armoured vans. Other cast members include Jonathan Tucker, Mark O’Brien, Jill Hennessy, Lauren E Banks, Amanda Clayton, Kevin Chapman and Jere Shea.

“I don’t like to write bad guys or good guys,” Fontana explains. “I like to write people, and so what we’ve worked very hard to do is make everybody incredibly human, both positively and negatively.”

It’s Jackie Rohr, played by Bacon, who immediately raises eyebrows with his foul-mouthed attitude and willingness to bend the rules to get what he wants. “I hope the audience will root for all the characters, but with Jackie specifically, he is so unabashedly who he is,” the showrunner says. “I think he articulates things that other people wish they could say and he behaves in a way other people wish they could behave. That’s not to justify anything he does but, on the same side, I think what’s wonderful about what Kevin is doing with the part is there is a crack in Jackie’s sense of self in that he’s clearly coming to understand he is an anachronism, that his time is passed.

“Yet he is fighting like a tiger to maintain a sense of himself and also gain the respect of the people around him. On the surface, he’s just an asshole. But the character is so multi-faceted that I think not only will the audience enjoy him but I think they will come to understand him because he’s a lost soul in a way.”

Rohr immediately ruffles the feathers of Hodge’s principled Decourcy Ward but, by the end of episode one, it seems they might already by finding some common ground in and out of the courtroom.

In writing the series, “I don’t really do a writers room, per se. I find them wildly unproductive,” he says, laughing. “What happens is everyone gets together and the first thing you do is talk about what you did last night and what the kids are up to, and then someone comes in and says it’s time to order lunch and everybody orders lunch, then the whole day goes by and no actual writing happens.”

Instead, once the basic story has been outlined, the writers will each go off and explore their assigned episode individually. Fontana continues: “I believe each writer needs to be able to use his or her voice fully. Then I get the script and I give them suggestions, they do another draft and then I give them maybe more suggestions or do a final pass to get it ready for production. To me, writing by committee is not writing; I think writing has to be a very personal experience. I try to maintain that on all the shows I do.”

But like many series on television today, City on a Hill goes far beyond the initial crime – the “underbelly” of the story – and instead focuses on the ensemble of characters involved, which Fontana says he hopes will draw viewers into their world.

“I hope the characters are engaging enough and original enough, which I believe they are, that the audience will want to know what’s going to happen to them,” he adds. “We not only have some great male characters, we have four really powerful women characters, because it’s not just a procedural cop show. It’s about these men and women and what they’re going through during the course of their lives that has nothing to do with the crime that’s out there.”

tagged in: City on a Hill, Showtime, Tom Fontana