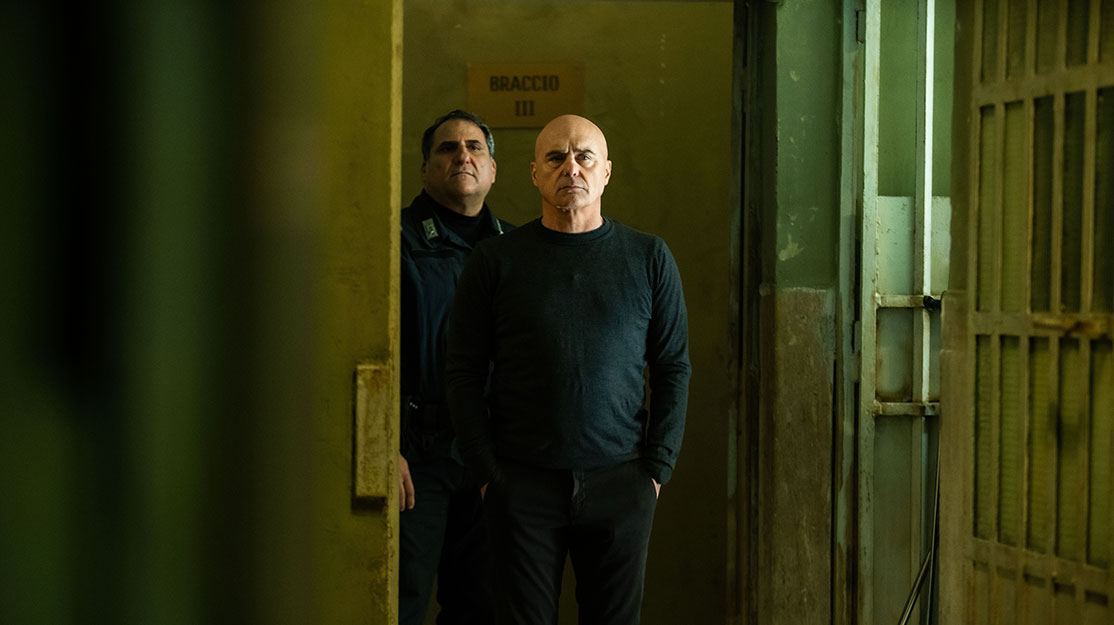 Perched high on clifftops overlooking the sea, the San Michele penitentiary looks as imposing as any prison one might be unfortunate enough to end up in. Then when you consider that it is ruled by the iron fist of governor Bruno Testori, an inmate’s stay is unlikely to be a pleasant one.

Known as Il Re (The King), which gives this Sky Italia drama its title, Bruno is ruthless with those who deserve it and unexpectedly compassionate with others. From the outset, his sense of justice is demonstrated by his handling of a prisoner alleged to have assaulted a guard by dangling him upside down and naked from a prison block roof. He also has listening devices planted in the cells to keep tabs on prison gossip and plotting.

But when his kingdom comes under threat after two deaths – of a warden and an inmate – Bruno must fight the most difficult of wars.

Il Re, which launched on Sky Italia last month, stars Luca Zingaretti (Inspector Montalbano) as Bruno, leading a cast that also includes Isabella Ragonese as a prison police agent of San Michele, Anna Bonaiuto as a public prosecutor investigating a network of illegal activity, Barbora Bobulova as Bruno’s former wife, and Giorgio Colangeli as Laccarino, a prison warden and loyal friend of Bruno.

The series is produced by Sky Studios, The Apartment and Wildside, from scripts written by Stefano Bises, Peppe Fiore, Bernardo Pellegrini and Davide Serino. Massimo Reale also contributed to the story. Fremantle is the distributor.

As well as taking the title role in breakout Italian detective drama Inspector Montalbano, Zingaretti played a role in political drama 1994, the third instalment in a trilogy of series exploring Italy’s political landscape in the early 1990s. All three series – 1992, 1993 and 1994 – were directed by Giuseppe Gagliardi, who also helms all eight episodes of Il Re.

When DQ speaks to the director, he is in the studio mixing the final episode. Looking back on making the show, he remembers “a great experience” highlighted by filming in real prisons. San Michele is a composite of disused prisons in Turin and Rome, which were digitally relocated near to the waters beside the coastal city of Trieste.

“We were filming there for around four months and this really inspired us to create the main character and all of the series,” he says. The influence of those surroundings is palpable, from the San Michele’s central circular chamber that rises up several stories to the stone-walled cells that hold the inmates.

Gagliardi was initially drawn to the series by Bruno himself and the show’s focus not on the inmates but the governor in charge.

“Unlike other and better-known prison dramas, the protagonist was not a prisoner or a group of demons but the prison director,” Gagliardi says. “That was the first thing that made me think it could be very original.

At the centre of the series is Bruno, a hard and unforgiving man striving to keep a hold on the prison. Yet outside the high walls, he is also struggling to maintain a grip on his personal life, where he has separated from his wife and must care for his sick daughter.

“The thing that interested me was the difference between the governor inside the prison being the king, with his hardness and way of governing the prisoners, and then his life outside the prison where he is a dad, he’s facing problems with his daughter who has an illness and he’s also fragile,” Gagliardi explains. “He’s a three-dimensional character and he was interesting to create with Luca. He is the villain within his kingdom, but also the fragile human being in his [personal] relationships.”

Working with Zingaretti, the director built Bruno up from the script to find the nuances in the character and the actor’s performance on set. “It’s been a great collaboration with Luca,” he says. “We have been working hard together on the script, we have been writing it together to make it more realistic and more natural for our actors and our characters. There was a perfect synergy.

“We also created the shades and nuances of his character, and that was really interesting.  Luca is an experienced actor, so it was interesting to learn from each other. There was an exchange of skills between, us and that was extremely useful not only to create his character but also to work on the script for the series.”

As they follow an ensemble cast of characters, from inmates to guards and police officers investigating the two suspicious deaths, viewers are taken into every corner of San Michele. It’s no surprise, then, to hear Gagliardi say his camerawork includes a mixture of cinematic and documentary styles. Modern cameras were paired with 1970s lenses to create a “vintage” look, “and merging the two styles gave us an effect we really liked,” he says.

“I did a very simple thing, which was to have a documentary style with a lot of handheld camera and then, at the same time, I used anamorphic and panoramic lenses from the 70s to give a feeling of a certain cinema of the past.”

Mimicking a documentary, the director also likes to film his actors without instruction for the first few takes before he starts to direct them, with the aim of finding a balance between the actor and director’s thoughts on a scene or character.

“Generally, I like the actor to be creative,” he says. “This is something that already happens during casting because when an actor comes to audition, they already have an idea of the temperature of the character, and then we can work on it together once they have been chosen.”

Filming on location, “we had a lot of challenges,” Gagliardi says. “First of all, we had a huge crew, so to move them to film in each location was a big challenge for the production company. They have been working hard to make it possible. They also had to recreate the locations as they imagined it. The scenography was very important and they had to design 7,000 square metres of space, so it was a great production effort.”

Following Il Re’s launch on Sky Italia and its international premiere at French television festival Series Mania, viewers now have the chance to make up their own mind about the morally ambiguous Bruno. As for whether the central character ends up a hero or a villain, Gagliardi isn’t giving anything away.