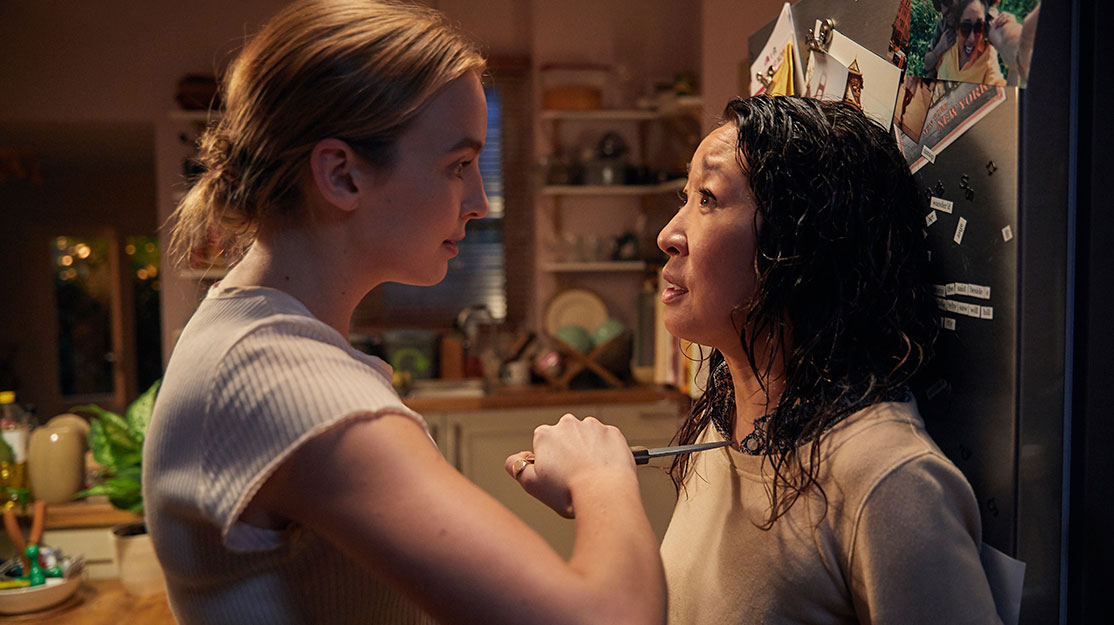 Sandra Oh and Jodie Comer engage in a game of cat and mouse in spy thriller Killing Eve, from Fleabag creator Phoebe Waller-Bridge. DQ visits the windswept English countryside to see them in action.

Sandra Oh is staring out of the window of a production trailer lodged on an exposed hillside overlooking miles of beautiful English countryside. It’s a typical British autumnal day as grey clouds jostle with blue skies. “Look at this location,” she says while wrapped up amid the blustery conditions. “It’s like the most beautiful, fantastic location. And it’s raining – it’s so romantic.”

More used to the never-ending sunshine enjoyed in LA, it’s here at Ivinghoe Beacon, which stands tall among the Chiltern Hills, that Oh chats to DQ as she prepares to film scenes from BBC America spy thriller Killing Eve.

Oh plays the eponymous Eve, a bored MI5 security officer whose desk job does not fulfil her fantasies of being a spy. When she is tasked with tracking down fearsome Russian assassin Villanelle (Jodie Comer), working on behalf of a shadowy organisation, the two women are thrown into a cat-and-mouse game set over eight episodes and several stunning European locations, including Tuscany, Berlin, London and Russia.

Based on the Villanelle novellas by Luke Jennings, the series was created by Phoebe Waller-Bridge, the writer and star of BBC comedy Fleabag, who is the head writer and executive producer. It is produced by Sid Gentle, with Sally Woodward Gentle and Lee Morris also exec producing and Colin Wratten as producer. Endeavor Content distributes the show, which debuted in the US this month and has already been sold to the BBC in the UK. Other buyers include France’s Canal+, HBO Europe, HOT in Israel and TVNZ in New Zealand.

“When we meet her, the surface of her life is that it is a happy and complete one,” Oh says of her character. “But she’s unfulfilled in ways that are mysterious to her. Her relationship with this assassin really awakens something deep in her that she’s willing to sacrifice many things for.”

Later on set, the crew is fully exposed to the elements as firearms experts prepare a number of weapons between takes. One is then handed over to Comer, who runs through a rehearsal before filming a scene from episode four, in which Villanelle, gun raised, approaches a battered and broken 4×4 that has been brought to a stop along a dirt track by what appears to have been a tremendous volley of bullets.

Liverpudlian Comer – who sports a Russian accent in the series – agrees Villanelle is a complicated character. “When you first meet her, she’s mystical in the sense that you don’t really know much about her. She lives in Paris, she has this very luxurious lifestyle but seems to have nobody around her. The only real relationship she has is with Konstantin [her handler, played by The Bridge’s Kim Bodnia]. She very much wants to be in control of every aspect of her life – and when Eve comes into the picture, things start to slip up.”

But is she also a psychopath? “Essentially she is, yes. She kills people. She enjoys it. Killing is like an art to her,” Comer explains. “She really thinks about how she’s going to execute it. She takes on personas to do that, whether it be dressing up as a different person, [speaking a] different language… all these different things she goes at with full speed. She’s not to be trusted but I think she’s very likeable, in a weird way. I hope she is, anyway.”

Comer has risen to fame on the back of starring roles in BBC dramas Thirteen and Doctor Foster. And after heading the cast of Starz period drama The White Princess, the actor was looking for something more contemporary when Killing Eve came along. “Phoebe’s script was probably the only one that came through and I was like, ‘I’ve got to do this,’” she recalls. “You get scripts that you love but this was so much fun to read on the page. Also, [I had to take] the chance to work with Phoebe, because I loved Fleabag and I thought with episode one, where is this story going to go?

“As for Villanelle as a character, I feel like assassins can be so one-dimensional and unrelatable. They can be very cold. But I felt that people would relate to her in some way. It’s quite original what Phoebe has done – going from quite a dark moment to laughter is the perfect balance.”

The role also afforded Comer the chance to do some stunts. “But I’m so uncoordinated,” she admits. “There will be a close-up of me flicking a knife and I’m, like, butterfingers, so we have to do it eight times. I’m so bad at this. But it’s fun and it’s something I’ve never done before.”

However, the actor adds: “Villanelle gets so close to the people she kills that not an awful lot of it is super physical. It’s very interesting how she gets so close to these people and how comfortable people feel around her. She can so easily be the girl next door. She can do all these different things and I think that’s what she enjoys the most.”

By contrast, what makes Eve stand out is that when she enters the spy game, she doesn’t suddenly know her way around a machine gun or become an expert at going undercover. “She’s not being an idiot, but everything is new,” Oh says. “She’s just a middle-aged lady who works at MI5 and makes sure everyone’s security is in order. There’s a difference between someone who picks up a gun that is believable and someone who is really picking up a gun for the first time.

“I remember one time I was going to do a movie where I had to shoot a big gun. I went into training and I looked at myself and thought, ‘I just look like a middle-aged Korean lady holding a big gun. This is not believable.’ I feel like in a lot of shows and movies, people seem to know how to do shit and that’s just not true.”

Sid Gentle had picked up the Villanelle novellas for adaptation when founder Woodward Gentle first met with Waller-Bridge. The latter was then still relatively unknown, as Fleabag, based on her play of the same name, had yet to air. “I’d read the play and I just loved the idea of putting her voice with that material,” Woodward Gentle says. “She really liked [the Villanelle IP] as well and was really excited by it. We actually developed it for another broadcaster, but BBC America took the script away and completely loved it even before Fleabag had gone out, so they totally got the tone and the ambition of it and weren’t just jumping on the Fleabag bandwagon. When it was greenlit, they asked if there could be one American character, so at least there would be some access point for an American audience.”

Eve was cast first, with the producers seeking a 40-something American to play the part. Canadian-born Oh, whose parents are Korean, fitted the bill. “She’s an extraordinary, serious, compelling, compassionate actor,” Woodward Gentle says. “You also believe her to be married to a Brit and to have been here [in the UK] for a while.”

For Villanelle, “we didn’t want a kick-ass sexy female,” she continues. “We wanted somebody who feels real, who feels like you could sit next to her on the Tube and she would just mix in. She needs to be a chameleon.

“Jodie’s an extraordinary actress. She chemistry-read with Sandra and that was amazing. She can have many different looks, she’s got amazing intensity and she’s also really naughty and spontaneous, so that worked well.”

Oh says she was drawn to the project by the mixture of wit and drama in Waller-Bridge’s scripts – and early trailers for the series suggest there will be large doses of humour throughout the drama.

“I thought it was unique and I really hope that’s what comes across,” says the actor, best known for her long-running role in US medical drama Grey’s Anatomy. “The English do dark detective series very well but it’s not just that, and it’s not just a character piece or thriller piece. It’s unique and it absolutely has to do with Phoebe’s voice as a writer and her choices.

“I really appreciate the way the show handles its wit specifically to each character. It’s not just like everyone’s funny – I can’t stand that, when everyone has the same type of humour. That’s just not true in life.”

The show’s comedic elements are never cartoony, however, with Woodward Gentle highlighting the production team’s extensive research aimed at bringing realism to the scripts and the world in which the series is set. “We’ve done a lot of research into who this organisation [that controls Villanelle] could be, who they might be killing off and what their ultimate ends might be,” she says.

“As you go further on with the show, you realise they’re actually mad and their scheme is quite terrifying, but that won’t get revealed until we’re into later seasons. We’re trying to ground it as much as we possibly can – it’s not James Bond, it should feel more grounded than that. But there is this black wit that you get in real life anyway.”

For Oh, meanwhile, the chance to lead a series has been a “30-year wait” – but she believes there is still plenty to be done to increase diversity in the industry. “You have a face like mine who is the face of the show and it’s two lead women, it’s produced and created by a woman. But I still feel there’s a lot of work for us to do to encourage women and actors of colour and crew of colour both in front of and behind the camera.”

“When was the last time you saw an Asian woman as the lead of a show? It’s very important to me and that is not lost on me at all. Having said that, it is 30 years in the making. But I’m happy to be here to do it.”