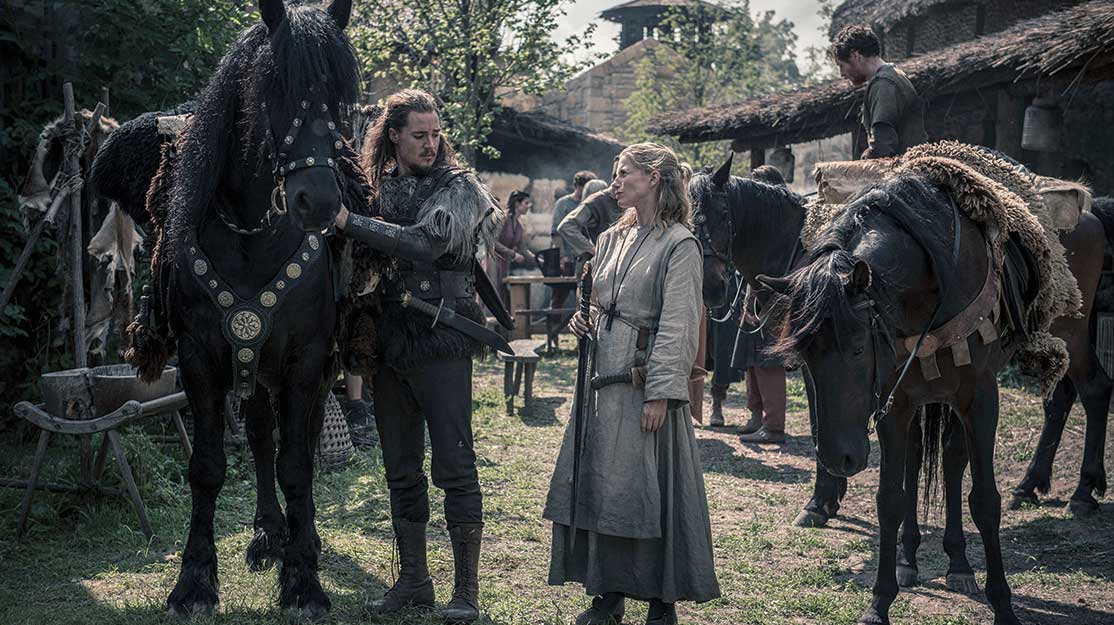 Keys to the Kingdom

As historical drama The Last Kingdom charges towards the end of its second season, read DQ’s report from the Budapest set, where stars Alexander Dreymon and David Dawson were preparing to do battle once again.

It’s a cold, wet, November day – the perfect conditions in which to experience a slice of ninth century English life, albeit on the outskirts of Budapest.

It’s here that production designer Martyn John is dodging muddy puddles and piles of dung on the remarkable set he has overseen for the second season of BBC2’s
The Last Kingdom, adapted by Stephen Butchard (Good Cop) from Bernard Cornwell’s bestselling Saxon Stories novels.

The first season followed young warrior Uhtred (Alexander Dreymon), born a Saxon but raised a Dane and wrestling both with his dual heritage and the bitter warfare splitting England apart. Now, allied with King Alfred (David Dawson), he hopes to reclaim the lands in the north that are his ancestral birthright. It’s not a journey without its difficulties.

“Uhtred has to make quite a few sacrifices,” says Dreymon, looking impressively energised near the end of a seven-month shoot. “He pays a high price to achieve his objectives. It’s a rocky road. It’s important to keep the moments where he’s playful and still a little boy, but there’s a lot less messing about this year. It’s more political and serious and dramatic.”

Most notably, Uhtred is enslaved and chained to the oar of a Viking longship – a terrifying experience for a man who believes he will only reach Valhalla by dying with sword in hand. “Going through that emotional arc, you have to dig quite deep,” says Dreymon. “I was very disappointed I wasn’t able to go through the journey physically because we didn’t have time. To get to that point of emaciation wasn’t possible, but with prosthetics and baggy clothes and sleep deprivation, I think we got away with it.”

If Uhtred is the hero, then Alfred is the anti-hero, and one who fades into the background of the books adapted in this second season, which debuted in March. Butchard was keen to rectify this: “I tried to keep Alfred and Uhtred tied together as much as possible by having Alfred use Uhtred for his own ends, to spread his influence in the north. England is a game of chess for him, and Uhtred is his key piece on the board. In a period of violence and conflict, Alfred is trying to build something substantial, because it’s only in periods of peace where cultures grow.”

“You’ll really find out why he goes down in history as Alfred the Great,” says wiry, self-confessed “history geek” Dawson. “It’s not just about him taking land, but about him trying to create an identity for his kingdom. He was militarily smart, building forts around Wessex to secure it from any more Viking invasions. He’s clever with his court, which is full of people wanting to take his place. But he also translated books into English to promote learning and signed a peace treaty with the Danes when they would have expected a ruthless response. He’s a frail intellectual who achieves so much, and as a skinny lad I appreciate that!”

Dawson is speaking just outside Alfred’s Wessex stronghold of Winchester, as recreated by John. Not quite as regal or majestic as you might expect, it’s a network of dwellings and stables, official rooms and religious buildings. There are loose straw roofs for the poor and thatched for the more wealthy. With authenticity the watchword, timber was used where possible.

What becomes rapidly clear is John’s ingenuity. A TV veteran with the likes The White Queen and Foyle’s War under his belt, he may ostensibly be showing us around Winchester but, from a different angle and with a bit of redressing, the same space has represented York, Northampton, Leeds and assorted other settlements in East Anglia and Wessex.

Here is a network of staircases inspired by the famous Escher lithograph; there, a pagan meeting hall that had doubled as a cathedral in an earlier scene. The architectural design incorporates Saxon and Viking influences, but with elements of ancient Roman mural and filigree for the eagle-eyed. Truly, anything goes if it enhances the show.

“I’ve got to use all my sets four or five different times,” says John, who looks exhausted but justifiably proud of his achievements. If this does indeed prove to be his last run on The Last Kingdom (“Two seasons is enough for me!”), then he has left quite the legacy for his successors.

Continuity has been key to the smooth running of the shoot. Most of the cast and, perhaps unusually, most of the crew returned for the second season, including producer Chrissy Skins and director of photography Chas Bain. The directors, though, continued to rotate – a policy with pros and cons.

“It’s a great learning curve,” Dreymon says. “The whole crew and most of the cast have a shorthand now, but the one person with the ultimate decision is the one who changes every two episodes. Everyone’s nerves get tested sometimes, but the best directors are the ones who are open to suggestions, whether it’s from me or a runner on their first day.”

Jon East, who directs the second block of episodes in this second season, has both originated series (The Last Weekend, Critical) and stepped onto moving vehicles (New Tricks, Whitechapel). For him, too, it was a challenge: “You’re trying to create a reasonably seamless next chapter – you don’t want you to create this odd, ungainly shape in front of an elegant wall of bricks, but you have to bring some distinctiveness to it. You can either ask the audience to observe the characters and scenario, or ask them to step inside it and immerse themselves. I’m in the latter camp – I like to take an audience right alongside the character for a more visceral experience.”

Those visceral experiences are most arresting in the epic battles that were a hallmark of season one, climaxing in the bloodbath of Ethandun that saw Alfred defeat the Viking hordes. While season two doesn’t have anything on quite that scale, there are still some impressive set pieces. For East, though, the priority was always narrative over spectacle.

“Those long action sequences can make it feel as if time is standing still,” he argues. “You think, at some point, they’ll stop clashing swords and someone will win, when what the audience is really watching is what happens to individual characters. You need story milestones worked into those set pieces, and characters need to go on an emotional journey as well as a physical one.”

East talks with audible excitement about filming the slave sequences and a fortress siege featuring “stuntmen who had to dress in layers of fire-resistant clothing, set themselves on fire and hurl themselves off battlements in 34 degree heat.” His most enjoyable moments, however, tend to be lower key.

“My favourite scene is a very quiet one between Uhtred and Hild, a warrior who becomes one of his coterie. They just sit in a field and talk, shot in a ‘magic hour’ light. There was a delicacy, honesty and truthfulness about their performances that was very touching.”

On the whole, however, The Last Kingdom’s team had to work hard to avoid scenes looking too idyllic and thus clashing with the dour, angst-ridden nature of much of the narrative. Unlike season one, the bulk of filming was done over the sweltering Hungarian summer rather than the bitterly cold winter. Plenty of post-production work was carried out to ensure that ninth century life looked every bit as nasty, brutish and short as it really was.

Oddly, the actors missed the wintry chill. “I think you benefit from seeing people’s breath, being cold, miserable and in the mud,” grins Dreymon. “The make-up artist has kept putting on dirt all the time because you couldn’t see it in the sunlight. It’s been easier this season to not suffer those conditions, but I would gladly do it again in the winter just for the look.”

Yes, winter will come again to Winchester as surely as there will always be a Westeros-shaped shadow over any series involving swearing, sex, men with mullets and frequently wielded swords. The comparison to HBO’s Game of Thrones is one everyone acknowledges but few seem to mind (although perhaps tellingly, no one will admit to having watched The Last Kingdom’s nearest equivalent, History’s Vikings). Dawson even concedes that The Last Kingdom would probably not have been made without the success of Game of Thrones.

“It’s incumbent upon any team working within this genre to try and put clear blue water between themselves and that giant of a show,” says East. “But The Last Kingdom has as its basis those fantastic novels and a drive towards historical and visual authenticity that differentiates it.”

The Last Kingdom, produced by Carnival Films and distributed by NBCUniversal International Television Distribution, has a new US partner for season two, with Netflix taking rights stateside, replacing BBC America. And though the drama has yet to be recommissioned for a third season, given the rich history and with 10 Cornwall books to plunder (each season has so far covered two each), there’s scope for at least another three outings. Dreymon, however, must be hoping the divergence from the source novels is complete by that stage, as by book 10, Uhtred is in his 50s – a leap of the imagination surely beyond even the most gifted make-up artist.

The central theme, however, will never age and, if anything, feels more pertinent now than ever: the clash of cultures personified by the one-man melting pot at its heart. Can such apparently opposed perspectives ever be reconciled? “There’s a bit more gravitas this year,” says Butchard. “Saxons and Danes are living together and becoming more integrated, so it’s harder to say who the enemy is and who’s fighting for who.”

Dreymon believes that, however nightmarish his era may appear, Uhtred has attributes that many significant 21st century figures might do well to heed: “He’ll look beyond what religion people are from or where they’re from, which is a beautiful thing – he’s really ahead of his time.”