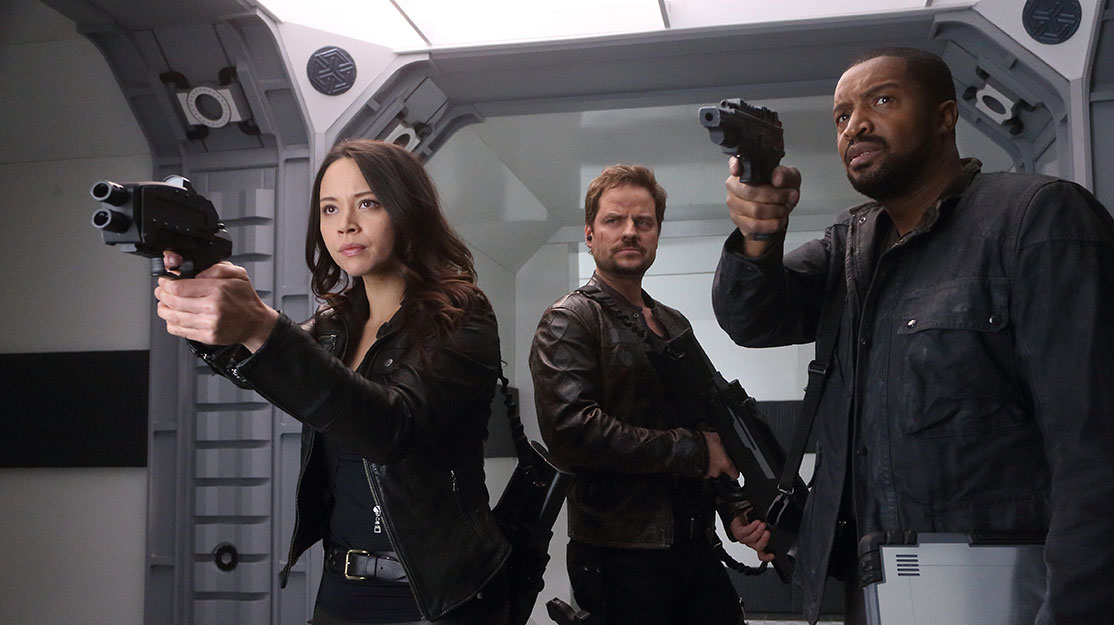 Kept in the dark

The crew of the Raza face new battles as space opera Dark Matter returns for a third season. DQ hears from the cast about why the sci-fi show is resonating with fans.

Six people wake up on a derelict spaceship with no memory of who they are or where they came from. Referring to themselves by numbers one to six in the order they woke up, they secure the ship, the Raza, and begin to try to figure out what happened to them.

So goes the premise of Canadian space thriller Dark Matter, which since its launch in 2015 has been sold around the world after making its home on the Space channel and on Syfy in the US, becoming a cornerstone of the latter network’s renewed focus on the type of genre programming from which it takes its name.

It is based on the graphic novel by Joseph Mallozzi and Paul Mullie (Stargate) and produced by Prodigy Pictures. The executive producers are Jay Firestone, Mallozzi and Mullie.

Now in its third season, which began on Space and Syfy on June 9, the show launches in the UK tonight on Syfy.

Anthony Lemke, who plays Three, has a theory as to why Dark Matter has proven to be a hit not just in North America but internationally: “Every TV show lives and dies by its characters and I think there’s a unique combination of cast meeting with script and creativity, and the openness to be creative and bring your own stuff to a character.

“That has created characters that are resonating with folks. But also, that first season dealt with a lot of issues that we can all identify with – the idea of second chances, of maybe starting again, being somebody that you couldn’t be before, who you didn’t want to be. We’ve all done that in our lives.”

The theme of escaping your past is one that runs through the series, but Roger Cross, who plays Six, says the creative team manage it without “nailing it on the head too much.”

He explains: “Stuff follows you and sometimes it’s karma and sometimes it’s whatever it is, and so it’s like, ‘Can we outrun it?’ It asks those sorts of questions, and then it’s in space! And it’s at some point in the future that we don’t know yet.”

The fact the show is set in space is another reason Lemke believes Dark Matter has become a success, particularly when it comes to the types of stories the show wants to tell.

“The space part is important,” he notes. “It allows for a more thorough explanation of what is a reasonably far-fetched concept, that seven people all wake up with memory loss. It does happen in life that you get into a car accident or whatever – all of a sudden you’ve lost your memory. That kind of thing happens. But for seven people to be going through it collectively can exist in the sci-fi world and almost nowhere else.

“But then that also gives a lot of opportunity for saying, ‘Alright, what would happen if we threw this into the mix for these seven people, and how would they deal with that?’ And that’s sci-fi’s big strength: the fact that you can do almost anything.”

When it comes to acting in a sci-fi series, however, Cross says that a character is a character, whatever genre they’re playing in.

“It’s not that it’s sci-fi as a whole but our show treads between the more serious side and being a bit camp. The neat thing about our show is that it walks that line but it gives you a broader range of things to play as an actor, and it also opens the door for episodes that you’re not going to see on Chicago Fire, or something like that, in terms of tone. They can just throw out the tone of the show and say, ‘Hey, now we’re doing something completely different!’ That’s not just in sci-fi, that happens on other shows too, but it tends to happen on shows that are a bit self-referential and have a tiny bit of camp to them.”

But in space, if no-one can hear you scream, that’s probably because there aren’t usually a lot of extras on the set of a spaceship, as Melissa O’Neil, who plays Two, points out.

“A big difference that we’ve experienced [between science-fiction and other types of drama], is usually that, on our set, we don’t have background performers and that’s a bit atypical of a lot of television that we do,” she says. “The fact that we’re in space, it restricts the amount of people that we’re with and the fact that it’s also about a bunch of people adrift on a ship. Sometimes we have a lot of extras, but most of the time we don’t, it’s just us – and half of the time we don’t see each other! So maybe that’s a big difference.”

With science fiction now becoming an increasingly mainstream part of television schedules, O’Neil reserves the final word for fans of the genre who, she argues, are the most passionate.

“Oh my gosh, our fans are amazing!” she says. “We stay in touch with them year-round; it doesn’t matter if we’re shooting or the show’s being aired, there are so many people that stay connected with us through social media platforms. And the [comic] cons; it’s been so incredible going out to all these different cities and meeting the fans from around the world. And sometimes fans travel from outside the country and we get to meet them.

“There are no fans like sci-fi fans! I think that’s universally understood.”