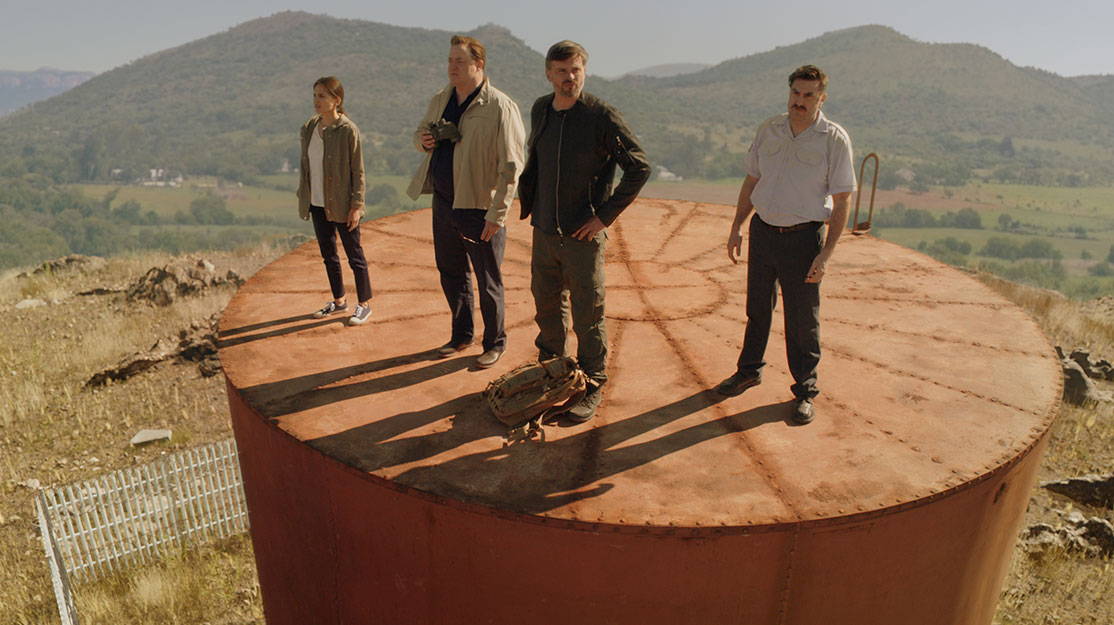 Star Tom Welling and co-showrunner Jeff Most open up about explosive action-thriller series Professionals, which is set against a backdrop of international espionage and a 21st century space race.

From an explosion that sees leading actors Tom Welling and Brendan Fraser leap from a hotel balcony to a mid-air blast that destroys a rocket, Professionals lives up to its billing as an all-action adventure from the outset.

The story opens when billionaire futurist Peter Swann (Fraser) and his fiancée, medical visionary Dr Grace Davila (Elena Anaya), watch their medical satellite blow up shortly after launch. They turn to hardened former counterintelligence officer Captain Vincent Corbo (Welling) to investigate the incident and, after assembling a team of experienced professionals, Corbo learns that a combination of Swann’s business rivals, corrupt government officials and a shadowy crime syndicate could be behind the attack – and the threat isn’t over.

Set against a backdrop of international espionage and corporate sabotage in the 21st century’s privately funded space race, the 10-part series explores the world of private military contractors (PMCs) who protect billionaires and corporations as part of a billion-dollar industry.

“These are highly skilled professionals who ply their trade in every imaginable sense, from being a defence for both high-profile individuals and major corporations around the world to being proactive against anybody who might target the ones they are protecting,” says Jeff Most, who co-created the series and co-showruns with Michael Colleary.

“In this particular story, not only has a rocket been attacked but the entire corporation and family behind a major international company are under attack from all sides. It becomes the job and duty of Captain Vincent Corbo – who is somebody who can’t be bought off, has a code and is willing to go the extra mile – to protect those he’s been put in charge of.”

Best known for playing the young Clark Kent in long-running Superman series Smallville, Welling describes Corbo as a tough military veteran who, as the series begins, looks to have settled for a quieter life. Swann’s arrival changes his plans.

“He doesn’t want to do it. He’d rather just stay in his cabin and work on his boat. But he’s enticed to come out to help other people,” the actor says. “Unfortunately, what he really doesn’t want to do is care about these people. But Brendan Fraser brings his likeability to the billionaire character, along with the rest of cast, and it was the relationships of the characters that I found a lot of fun.

“A lot of the banter, fun and excitement you see between the characters was there for us on set as well. Vincent is thrown right back into the midst of things, which becomes a little more complicated emotionally and physically than he initially wanted, but then he finds himself really wanting to help people, help Peter and help his team around him.”

The series marks a departure for Most, who has focused on feature films during a career that has seen him work as a producer on cult film The Crow. Professionals was a longtime passion project, stemming from his fascination with highly trained PMCs who work around the world.

“There’s never been a show that really focused on their lives, their careers or what they go through,” he says. “We put a lot of effort into trying to find the right tone and find the right way into the story. We had a different pilot originally and then were very taken by a story we heard about how [SpaceX CEO] Elon Musk had a rocket explode upon launch in September 2016. Then Michael and I decided to refocus our energies because we really wanted to ground the show in the real world.

“Thankfully, we interested Tom early on, who had a great deal of input with his thoughts on the matter. Tom had taken an interest in this world on his own so we had just a great creative environment. It was an independently produced television show so there weren’t a lot of people in offices who would tell us what they were looking for. We were left to our own devices and we were able to use the creative juices of our great cast, all the writers and our great directors. We just had a ball making it.”

Distributed worldwide by Rainmaker Content, the series is produced by Most Media, Subotica, Spier Films and Roadside Attraction in association with Jeff Most Productions and Leonine. Nordic streamer Viaplay came on board as the anchor broadcaster before other deals with German networks RTL2 and TNT were completed.

“[Although it’s] an independent endeavour, this is not a student film,” Welling states. “This thing is huge. We have explosions with rockets. We have big guns. We have helicopters flying where maybe they shouldn’t be – it’s epic. Every day was like being on a big-budget film, and it allowed us the freedom of our own opinion and our own style.”

Welling says playing a “man of action” in Corbo was what first drew him to the project three years ago. “There are guns, there are explosions, but what I liked is the sense of adventure and exoticism about it.

“I did as much research as I could into the world of these guys,” continues the actor, who also exec produces the series. “The problem is they’re not just walking down the street and they’re also not just willing to talk to you. We had guys on set where it was their job to protect us in certain locations. They were a little more forthcoming. But there were situations where maybe it was a fight sequence or something we were doing with a gun and I’d turn to them and be like, ‘Is this what you do?’ Sometimes he’d be like, ‘No. But it’s cool.’”

Filming for three months almost entirely on location in South Africa, the production wasn’t without its challenges, such as when permission to film a firefight at a railway yard was withdrawn at short notice.

“We all had to get together and be like, ‘OK, how do we redo this? How do we rewrite it so works with the scene?’ We figured it out, but it’s running and gunning that I actually think is really exciting and fun because, as much as you plan, things were always gonna shift and adjust,” Welling says. “That’s where the creativity can come out.”

“This doesn’t look like television,” Most asserts. “This is not talking heads. This is running and gunning. We’re always on the move. It looks like a big -budget feature production. We did everything we could to put every penny on screen. We constantly pushed the boundaries. There were things we just couldn’t afford, so we came up with some wild things that ultimately curtailed what we could have done, but we came up with very ingenious and inventive ways of achieving everything we could to really make it a wonderful, fun and old-fashioned popcorn experience.

Describing Professionals as a “blue-sky action adventure,” the co-showrunner says the show doesn’t hide in the shadows. “It’s light toned but very grounded. We wanted it to be as spectacular-looking a show as we possibly could make it. We want to make the kind of show that people want to tune in to every week, see thrills and get heavily invested in the characters, because they’re all wonderful characters. It’s a combination of great writing with great execution, and we delivered on all fronts.”

The series has its world premiere as part of C21 Screenings today ahead of its launch on Viaplay on November 23. Both Welling and Most are now raring to go on a second season, which is in development. Most promises the second run will be “bigger, better and more explosive.”

“This is a window into a world that is striking and unusual. The procedural aspects of how PMCs work and what that military training brings to their character is very unlike anything we see with police shows and so forth,” he says.

“These are guys who have to break the law, in many instances, to do the right thing, and it’s exciting to watch. They are part detective. They’re going undercover and playing different people in order to get something done. There’s a versatility that allows them to really play to the wonder in all of us about what this world we rarely see is all about and what it can be like. There’s just a lot of fun to be had.”