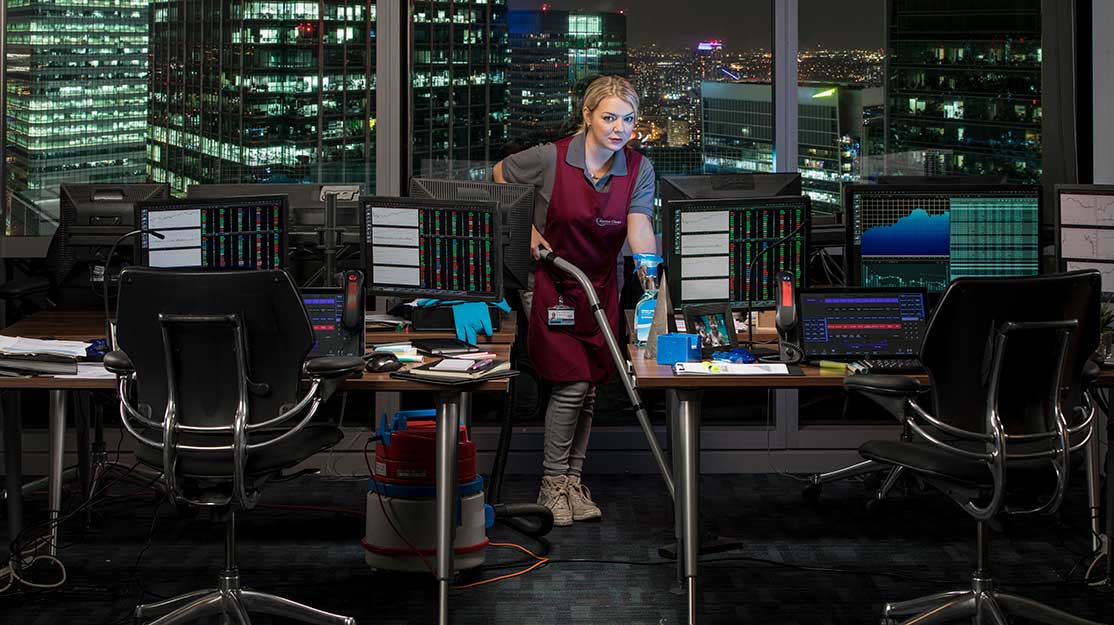 During a screen career spanning more than 20 years, Sheridan Smith has won acclaim for her portrayal of real people in biopics such as The Moorside, Mrs Biggs, The C Word and Cilla. So it’s surprising to hear her reveal that the most stressful part of appearing in ITV drama Cleaning Up was playing Sam, the fictional lead character.

“My own thing is losing myself in Cilla or Mrs Biggs. You have so much research and you focus on their mannerisms. But you hide behind it in a weird way and it’s like, I didn’t know what to do with Sam really,” the actor admits. “That was the most challenging thing for me. You do end up getting angsty with it, because Sam’s living on her nerves. But I have learned to leave it there now and not take it home, if I can. I still go to my own personal stuff to get that emotion, so it’s always going to be hard to switch that on and off.”

In the six-part series, created and written by first-time writer Mark Marlow, Sam is part of an invisible army of minimum-wage cleaners who sweep, polish and dust the offices of a financial firm whose offices look out across London from the city’s towering Canary Wharf district. But struggling with an online gambling addiction and drowning in debt, the mother-of-two begins to use valuable inside information to bet big on the stock market in the hope of changing her fortunes.

After taking some time out of the limelight, stage and screen actor and singer Smith returned with an album last year and an acclaimed performance in BBC one-off drama Care, in which she plays a struggling single mum who finds herself having to care for her elderly mother when the local health authorities refuse to take responsibility.

“She is very vulnerable. I do love playing characters like that,” Smith says of playing Sam. “I also love that she’s such a good mum. [Having children] is something I haven’t done yet, or might not do, but at the heart of it she hasn’t had opportunities that maybe other people got. So I love that she’s got that fire in her belly. Also, the scripts were kind of written on the go because we did it in two blocks. So I didn’t even know what was coming later, which was kind of fun as well because when I was finding stuff out, it was like, ‘Oooh.’ I’ve never had that before. That was quite fun. It has been the longest job I’ve ever done, filming-wise. It was a long shoot, but it’s been fun.”

Cleaning Up completed filming a year ago but the timing of the six-part drama couldn’t be more topical, with gambling and, in particular, mobile gambling apps, being key to the story. It also highlights the plight of the thousands of office cleaners on controversial zero-hour contracts whose work often goes unrecognised or unnoticed.

Smith and co-stars Jade Anouka (Jess) and Branka Katic (Mina) went on a cleaning course to ensure their on-screen performances met the standard of real-life workers, while Smith says she also learned about the stock market and insider trading in a similar fashion to her character, who at one point reads a book called Investing in Shares for Dummies.

“It was confusing to me and completely went over my head when I first started reading about it all. But the great thing is it’s new to Sam as well, so it makes it easier to play because she’s figuring it out as well,” Smith says. “It’s fascinating to learn about it all. I didn’t know anything about that world.”

As Sam’s best friend and fellow cleaner, Jess also becomes drawn into her money-making scheme, hoping to provide a cash injection to her family’s struggling cafe. Anouka, whose previous credits include ITV thriller Trauma, says all the characters are relatable. “I can see people I know who could easily be in these situations. What drew me was these are real people, these are real situations – ordinary people getting themselves into extraordinary situations.”

But while Sam’s cleaning job means no one would suspect her involvement in illicit economic activity, financial trader Blake (Ben Bailey Smith), who unwittingly becomes Sam’s initial source of information, doesn’t quite have the same protection as he picks up stocks for a mysterious buyer whose identity remains a secret through the first episode.

“Blake is playing with high stakes. That’s not lost on him. But to counteract that, there’s also a disturbing sense of nonchalance about what he’s doing, which should tell the audience he’s done it many times,” Bailey Smith says. “If you keep the amount small and the number of times you do it disparate, it will probably fall by the wayside rather than go under the microscope. Blake in that first episode is worried about the microscope, and what’s fascinating about Sam is she feels she’s so far away from that microscope, so why not do it? So I guess you’re seeing, in a funny way, where you can be in terms of tension, panic, worry, concern and fear deeper into the game in Blake, but you’re also seeing what it’s like to start [in Sam].”

Cleaning Up was created by Marlow, who teamed up with lead director Lewis Arnold and prodco Sister Pictures to bring the series to ITV after conceiving the story while watching big-screen blockbuster The Wolf of Wall Street. A former video editor, Marlow had been “trying to be a writer” for five years until Arnold introduced him to Sister founder Jane Featherstone (Broadchurch, Humans).

“Lewis and Mark sent me the first draft and I read it and loved it. I was like, ‘But you’re a brand new writer, so this is great but can you do a rewrite?’” Featherstone recalls. “I said, ‘Here are my thoughts on it, if you can do a rewrite, I’ll take it on, because if you can’t there’s no point in being a TV writer.’ That’s the process of scriptwriting, that’s normal. We do that on every single script, but I didn’t know if Mark could do that – and it turned out he could. So I took it on and we did 15 more drafts and then took it to ITV when it was this very beautiful thing Mark had really honed. They greenlit it within about a week.”

Marlow then faced the “daunting” challenge of writing the remaining five episodes, having only ever written a handful of pilot spec scripts. Thankfully, he had an idea of how episode two might begin and that kickstarted the process, which he describes as a huge learning curve.

Key to the script was getting the character of Sam right – an exercise the writer completed with the help of input from Arnold. “I knew the idea of the show was big but it would fall down if you didn’t believe the character would do something,” Marlow explains. “So I spent many weeks talking to Lewis about what we needed to get Sam correct, particularly in the first half of the first episode, so when we see her going down this criminal path, you totally buy that this person is going to do this. Lewis was helpful in getting that right. Then, once we were happy we had a character that worked, that was the version Jane saw.”

Filming was largely split between London’s iconic Canary Wharf district and a housing estate in the shadow of tower blocks, where Sam lives with her two daughters. A suitable home was found on the Isle of Dogs, with Featherstone admitting it was important to get the location right.

“I’m really fussy about that sort of thing and getting it right, so we built the interior of the house in a studio and used the exterior on the Isle of Dogs,” she says, revealing that cameras weren’t allowed to film on land owned by the Canary Wharf management company due to the subject of the drama. “But there’s a patch of land in front of Canary Wharf Tube station, not owned by Canary Wharf, so all the scenes in Canary Wharf have to be there, all on private land.

“All the banks also said no to filming but there’s a floor owned by an office rental company in one of those very tall buildings and we rented that, so we were there.”

While broadcasters can be nervous about commissioning scripts from fresh writers, Sister Pictures’ involvement put ITV at ease, giving Marlow the space and support he needed to write the drama, which is distributed internationally by ITV Studios Global Entertainment. Featherstone says the story was “irresistible” to her, though the fact it isn’t strictly a ‘genre’ piece was one of the most difficult elements of the project.

“Everyone’s desperate for stories but it’s difficult to make things that don’t have a genre underpinning them,” she explains. “It’s the hardest thing of all, because there’s no body. What we did have was a criminal element in terms of the jeopardy, and the stakes are there because of what Sam’s getting involved with. But really it’s a family drama.”

Featherstone and Marlow have discussed storylines for possible second and third seasons, though they admit Cleaning Up’s future rests with viewers and whether they follow Sam’s morally dubious journey into the murky world of insider trading.

For her part, Smith says she would also be keen to come back to the show, which begins on ITV on January 9. And as a keen observer of the creative process through production, she is now developing plans to set up her own prodco and build a future off-screen.

“There are a lot of exciting things [I’d like to produce],” she says. “There are lots of things I’m planning to do this year, a lot of great acting roles, so I’ve still got that. But, going forward, that’s the next dream – being creatively involved and maybe doing some more behind the scenes. Who knows, I might direct; I don’t know. That might be 20 years down the line. I’m just exploring the whole thing of being able to develop things with people and have much more say in it all.”