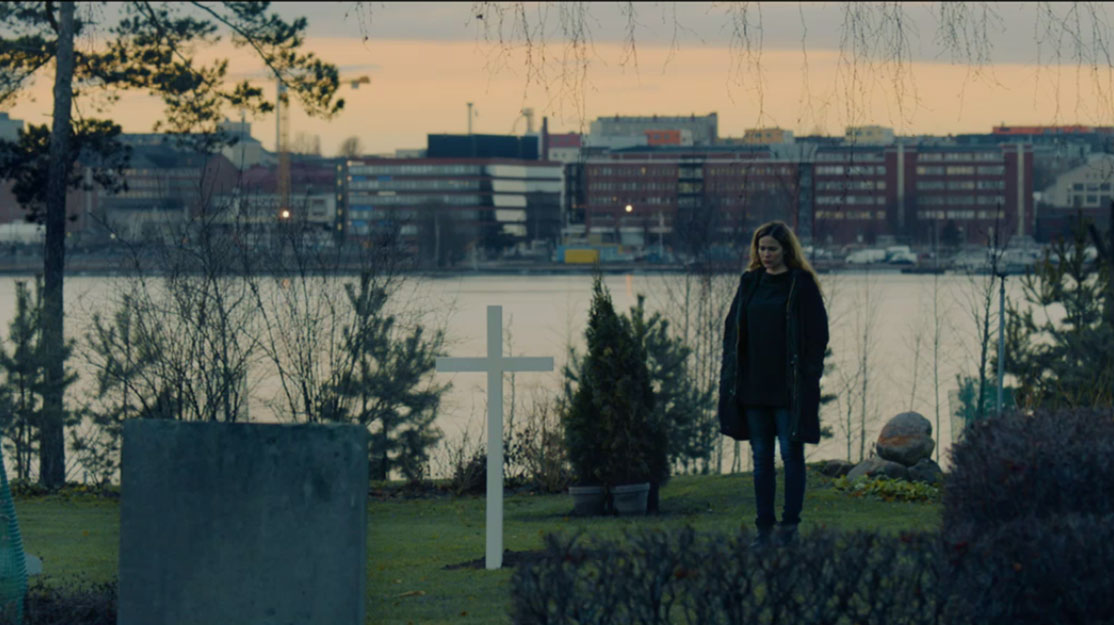 Following its debut in Finland, crime noir drama Karppi (Deadwind) is rolling out worldwide on Netflix. DQ speaks to co-writer and director Rike Jokela about introducing a new female detective into the Scandinavian crime genre and the birth of ‘Helsinki noir.’

Launching around the globe on Netflix on August 23, the series introduces Sofia Karppi (played by Pihla Viitala), a detective who returns to work following the sudden death of her husband, leaving her with two children to raise alone.

The 12-part drama, co-written by director Rike Jokela with Jari Olavi Rantala and Kirsi Porkka, is produced by Dionysos Films and H&V Production and distributed by About Premium Content. It first debuted on Finnish pubcaster YLE in March this year.

Here, Jokela tells DQ about the origins of the story, why the title character stands out from other television detectives and how the extremely inhospitable conditions during filming were incorporated into the story.

How would you describe the show?
Deadwind is a mystery crime story that reflects the seasonal depression of Finns living in the dark and cold north during a period of climate change. We consider Deadwind to be ‘Helsinki noir,’ the weird cousin of Nordic noir, similarly to how Finland is sometimes considered to be the weird country among the Scandinavian territories.

What are the origins of the series?
Ten years ago, I did a crime show called Virta (River), which centred on a female cop in her 30s. She was a complex individual, but good at her job, and I started to imagine how she would be 10 years later – if she hadn’t got fired.

Why were you interested to tell the story of Sofia Karppi and how does she differ from other detectives?
Equality is one of the key themes in the show. From the outset, we decided that Sofia must not differ from any male detective characters just because she is a woman. Sofia does things we are used to seeing men doing in this genre. It reflected the equality of women in Finland compared with countries that suffer from gender inequality.
Sofia is a good cop but over-confident, which gets her into trouble a lot of the time. One of her biggest weaknesses is that she doesn’t want to ask for help, and in season one she struggles with this as she deals with the loss of her husband while also being a mother of two kids. She doesn’t care what people think about her and doesn’t bother to comb her hair, which even her 10-year-old son points out, but she is empathic and she cares about victims of crimes, which may make her special within her profession but also creates a great deal of issues.

How was the show first developed for YLE?
Kirsi Porkka, Jari Olavi Rantala and I introduced to YLE the idea of a female detective, a mother in her 40s, who is a single parent after the loss of her husband. We also wanted to focus on one specific crime, and its ramifications on many people’s lives, as well as the social and environmental impact.

Tell us about your writing process.
We created the concept together, which took a year. Everything started from the main character. We discussed who she is, what she wants, what her weaknesses are, where she lives, her kids, husband, boyfriend, girlfriend – we spent a long time asking these questions before starting to think about any plot. By the way, Karppi means carp – a koi fish – and she has a black koi fish tattoo.
When it comes to our process, first of all we try to develop the basic idea of a crime story and we think about the theme, which frames the whole series.
We collect lots of items and images on the wall of our writers’ basement, visualising ideas we’d like to put in our story. Then we try to figure out who the villain is. We can then begin to form and outline the mystery, one of the most important elements of our plot.
In concept, there are three main plots and all of them have a main character. These three key plotlines are the most important, and we play with them and finesse them a lot, envisioning different scenarios of how characters could meet and how their paths cross. Then we start to connect everything together, first on a large scale and then gradually focusing on the details, which is the most rewarding part.
When the plot is beginning to form, we shift our focus to the inner life of the characters and begin to discuss them in a lot more depth. This is the final step, and by this point in the process I try to already have cast the show and to have an idea of who will be in each role. We also find it really beneficial at this final stage to meet the actor and further develop their character collaboratively.

Do you have a particular directing style? If so, how did this influence your work on Karppi?
I believe I do have a particular directing style. As I already work with the writing team, my directing style influences, and is already embedded within, the writing. My colleagues know my style and can write to the way I direct. It is a very natural process because we know each other well. In season two, we have brought on a fourth writer in Harri Virtanen, who is a very experienced and highly regarded professional. His impact has pushed us further, which is great.

Why did you cast Pihla Viitala in the lead role? What does she bring to the character?
I have worked with Pihla before and I think she is one of the top actors in Finland. She is very dedicated but also charming and very easy to get along with. She socialises with the crew and this inclusive, grounded attitude means she is loved by everyone involved in the show.
Pihla brings to the character the honesty, brutality and sensitivity that is needed to play a complex person. She is also fearless and ready to challenge herself – though sometimes so much that she reminds me of Karppi herself. We wrote the character knowing that Pihla would play her, so we reflected some of her own features and mannerisms in the character.

Tell us about the production process. What were the biggest challenges you faced on set?
One of the biggest challenges we faced on set was the cold weather, due to us shooting mainly on location. In the footage you could see the characters feeling cold, so we chose to incorporate that into the story. The cold weather of Helsinki almost became a character itself.
The inconsistency of the weather affected the continuity of what we were shooting. But instead of fighting back, we decided to use the weather to show emotions, in the same way that light and shadow is normally used. This gave us another dimension to emphasise emotion.

How do you think Karppi stands out from Nordic noir?
The people and culture across the Scandinavian countries are very much alike, with the exception of Finland, and the Scandi languages are very similar, again except Finnish. I believe it’s our mix of eastern and western roots that make us different. The characters in Deadwind are harsher, more introvert, and complex in the way they hide emotion. But when something shakes them enough, they begin to unravel.
Humour is also different in Finland. I found very little humour embedded in Danish or Swedish crime shows; we have this constant presence of black humour.
We also have smaller budgets, which forces us to make up new ways to do the complex scenes. In season one, we have about 700 hidden digital effects that we use to achieve things that countries would be able to film for real. Luckily, the budgets for Finnish productions are getting better.

What can you tell us about season two?
We are finishing developing storylines for eight episodes, as season two and three will both have eight episodes each. This process has taken eight months. The next stage of development will be the writers starting to write scripts, which, due to the attention to detail so far, will be a much quicker part of the process. The twin cities of Helsinki and [Estonia capital] Tallinn, including the plan to link them by a tunnel under the Baltic Sea, are at the centre of the story, with politics and a very different murder case also key.

How is Finnish drama evolving and what new storytelling opportunities are there?
Finnish drama is becoming more international and budgets are slowly increasing, which is essential if we wish to compete in this international market. Some shows try very much to be ‘international,’ but this becomes problematic as the originality of these stories comes from them being and telling Finnish stories.
One problem with Finnish drama is that as traditional TV channels and on-demand services want to take more control of the content, the writer’s vision is not being trusted. I hope that, in the future, people start to take more risks and push back against this.
We are lucky to have a great producer in Riina Hyytiä, who understands and champions us to have creative freedom with little external interference, and fantastic distribution partners APC who are very supportive and understand the international appeal of the show. This is very important – constructive feedback is always welcome, but if you are not free to write what you really want, there will not be any soul in the story.