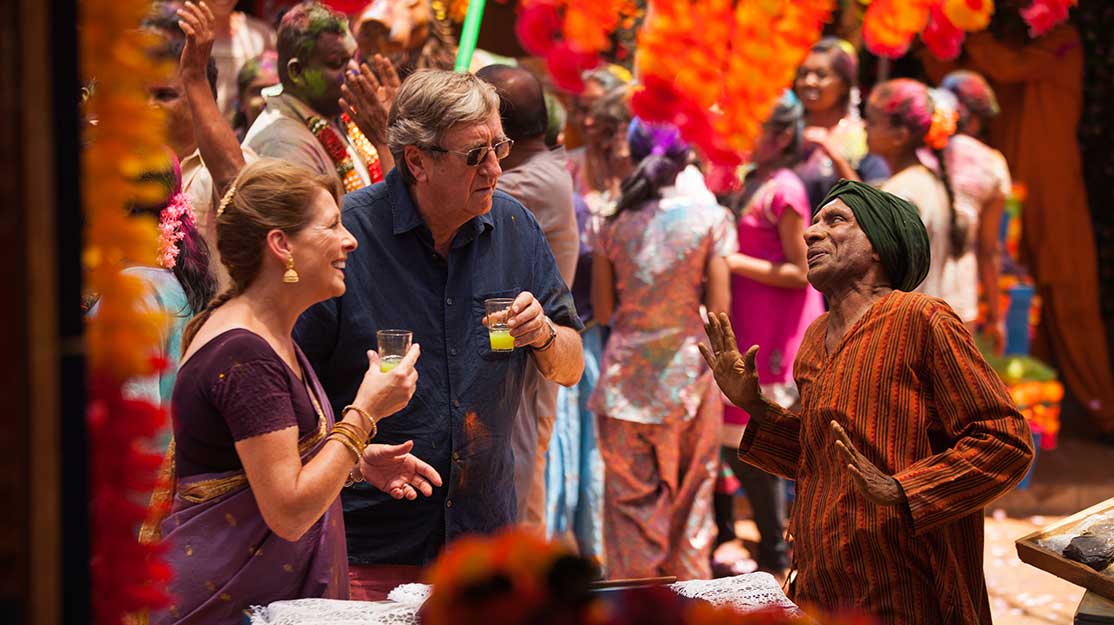 Director Bill Eagles and cinematographer Michael Snyman discuss their work and partnership on ITV’s new India-set medical drama The Good Karma Hospital, and reveal the challenges of filming on location in Sri Lanka.

For the cast and crew of a television drama, there can be worse places to spend a 12-week shoot than on location in idyllic Sri Lanka.

The island doubles for neighbouring India in The Good Karma Hospital, a six-part medical drama for UK broadcaster ITV. But while they were able to capture its luscious landscapes and striking sunsets, lead director Bill Eagles and director of photography Michael Snyman say filming in Sri Lanka posed a unique set of challenges.

“It was very exhausting,” Eagles admits. “The heat and the weather meant there were quite a lot of early nights but very early starts. The sun came up about 07.00 and went down around 18.00, so to get an 11-hour day we had to begin shooting at dawn. So we were up at 05.00 for hair and makeup and for me to prowl the set. By the end of the day, because of the heat and the rain, people were exhausted.”

The show tells the story of junior doctor Ruby Walker (played by Amrita Acharia), who leaves the UK to join the over-worked staff of the run-down Good Karma Hosptial. Led by eccentric Brit Lydia Fonseca (Amanda Redman), the cottage hospital is the beating heart of the community and soon becomes home from home home for Ruby.

“When I first got the script, I thought they’d sent it to the wrong guy!” jokes Eagles, who directs the first four episodes, with Jon Wright picking up the final pair. With a background in series such as CSI, Gotham, The Mentalist and Strike Back, he admits he has a reputation for blowing people up or setting them on fire – and there was none of that in the Sefton’s scripts.

“But it came from Tiger, who I’d worked for the previous summer on a low-budget but incredibly well-written ensemble cop show called Cuffs,” he continues. “I did the car chases in that and it played into my background as an action and crime director, but it also had quite nuanced dramatic scenes with really interesting cast members. Obviously Tiger saw something in the way I delivered that and thought, ‘Why not?’

“The last show I did before this was an episode of Gotham, so this was a breath of fresh air and I absolutely loved the script. To feel the quality of Dan Sefton’s writing – so economical, so dense in story but so rich in character… he knew that if we could get this right, it would play with the heartstrings and it would have you raising your hopes with the characters, crying with their despair but feeling a sense of new hope, a new dawn as they face their troubled lives and overcome emotional obstacles along the way. I was really impressed that Tiger came to me and it was perfect timing for what I wanted to do.”

Eagles says he was particularly drawn to the project by Sefton’s “sophisticated” scripts, plus the interplay between Redman’s eccentric matriarch and Acharia’s naive, wistful and optimistic stranger abroad.

He continues: “If you’re shooting Casualty or a British hospital show, there’s only so many types of people who you can really bring in through the hospital doors. But, of course, if you set it in the backwaters of an Indian town, you’ve got a wonderful, rich array of characters, both rich and poor, European and local, with cultural issues and issues of custom and religion.

“Then, of course, it’s set in India. As a director, I have shot all around the world, a lot in Britain and the backstreets of LA but, actually, it doesn’t quite compare to the possibilities of a beautiful sunset over the Indian ocean, an epic vista from the top of a mountain over a jungle or having an early morning mist rise over paddy fields that seem to go on forever. These are landscapes to which any director would give their back teeth to point a camera at. The mission was to make it epic and make it feel like we were taking the audience on a journey.”

Unusually, Eagles chose to mix up the production by shooting episodes three and four first, rather than beginning with the first two, as might have been expected. But there was good reason behind his thinking. Often with a new series, particularly in the US, a single pilot is commissioned, meaning there is just one episode to set up the story. But with The Good Karma Hospital’s full season being ordered from the start, Eagles reasoned that by jumping ahead, the cast would have time to refine their performances and fully embody their characters before filming the opener.

“That really did play to our strengths and to our advantage,” he says. “Often you don’t get the chance because you have to shoot the first one to sell it to a broadcaster. But in this instance, it was great. And while we’re very happy with episodes three and four, we did learn along the way. So when it came to making the opening episode, which will make or break the series, we were so super confident about where we were with our characters and storytelling. What the audience will make of it, who knows, but at least we have no regrets.”

That process was made easier due to Eagles’ partnership with his director of photography, Michael Snyman (The Night Manager, Of Kings and Prophets). The pair had previously worked together in South Africa on Strike Back – Snyman was then a camera operator – so when they landed together in Sri Lanka, there was already a shorthand between them that meant they could hit the ground running.

“Mike is a consummate artist with light. He’s also incredibly inventive and he’s a wonderful force of energy on the set,” Eagles says. “He and I never go to a scene without both of us having read it, understood it and known what it’s about. He never offers up a shot that gets in the way of storytelling. The camera serves the action, the emotion and the meaning of a scene. Sometimes you will be offered a super-cool, creative shot by a DOP but actually it’s getting in the way of the scene. He totally gets it, so it was a joy to join forces with him. He keeps the energy of his crew high and he’s prepared to work fast on a ridiculously tight TV schedule.”

Snyman says the “big idea” behind shooting Good Karma was to embrace India through the show’s Sri Lankan location – a teacher-training college in Galle, two hours from the capital Colombo – and taking the camera outside as much as possible.

“A lot of interior scenes were moved outside just to get out of that hospital because, if you shoot two or three episodes there, you start to shoot the same rooms and beds over and over again,” he reveals. “Breaking that mould was very beneficial for us. So we moved a lot of scenes outside just to see the country because it’s so beautiful. It’s so green and luscious.”

Working outside in the heat provided its own problems, of course, but it meant the crew agreed to shift the filming schedule.

Snyman explains: “We started off shooting an 11-day fortnight but a lot of people weren’t able to sustain that pace. So we suggested we’d be better working a five-day week with 12-hour days, which makes up for that extra day – which the producers embraced, thank God, because it was getting very taxing. It was just too hot to work at that pace. You get in in the morning and by 06.30 you’re sweating, and you get home at night at 19.30 and you’re sweating. It was very difficult for a few people.”

Beyond the heat, there was also the issue of Sri Lanka’s near non-existent production infrastructure, meaning much of the crew with whom Eagles and Snyman worked had no experience in television. “It was quite interesting to see the crew develop through the show,” Snyman says. “How they took up the lead on things was just magnificent. By the end of the show, they were comparable to [production crews] anywhere around the world.”

Eagles chips in: “Making six hours of high-end European TV is not something anybody even remotely near us was used to, but we did take in a lot of local crew and it was great. Our gaffer was training some of the people on his team in electricity and cabling, and Mike and his camera department had people.

“Often we had 100 to 150 extras on set and none of them had ever done any extra work before. So just explaining why we needed them to walk from here to there and that they had do it again and again, and telling them not to bump into the cast or stand between the camera and the cast, that took a bit of time.”

The number of extras swelled to more than 1,000 during an episode that required a recreation of the Hindu festival of Holi, which Eagles describes as a “massive rave” featuring dancers, drummers and two elephants.

To meet the demand, production staff were sent out to nearby beaches to find holidaymakers who could join the festival scenes alongside the mass of locals.

“It was the most massive endeavour, and there was a certain amount of trepidation – how could we pull this off?” Eagles admits. “We had two elephants that day as well. It was quite late in the shoot and, even though we were dealing with 1,000 people, most of whom had not done any extra work before, it’s a spectacular sequence and it worked brilliantly. That was a tribute to everyone learning along the way and to working with people who were hungry to learn. It was an epic thing to pull off and very cool that we managed it.”

Likely to draw comparisons to BBC detective drama Death in Paradise, which sees a British police officer relocated to the (fictitious) Caribbean island of Saint Marie, The Good Karma Hospital promises to provide a burst of colour in the dreary winter months when it debuts on February 5.

“That’s what ITV are looking for – a show that will make you laugh, make you cry and send you home feeling warm and happy with the world,” Eagles surmises. “It’s a little bit of escapism but it’s an emotional treat with a bit of humour along the way. It was really fun to make.”

Snyman adds: “I think people will really enjoy it. We didn’t hold back, we did the best with what we had and the crew can be very proud of what they produced. Sri Lanka and its people did us proud. I was proud to be a part of it.”