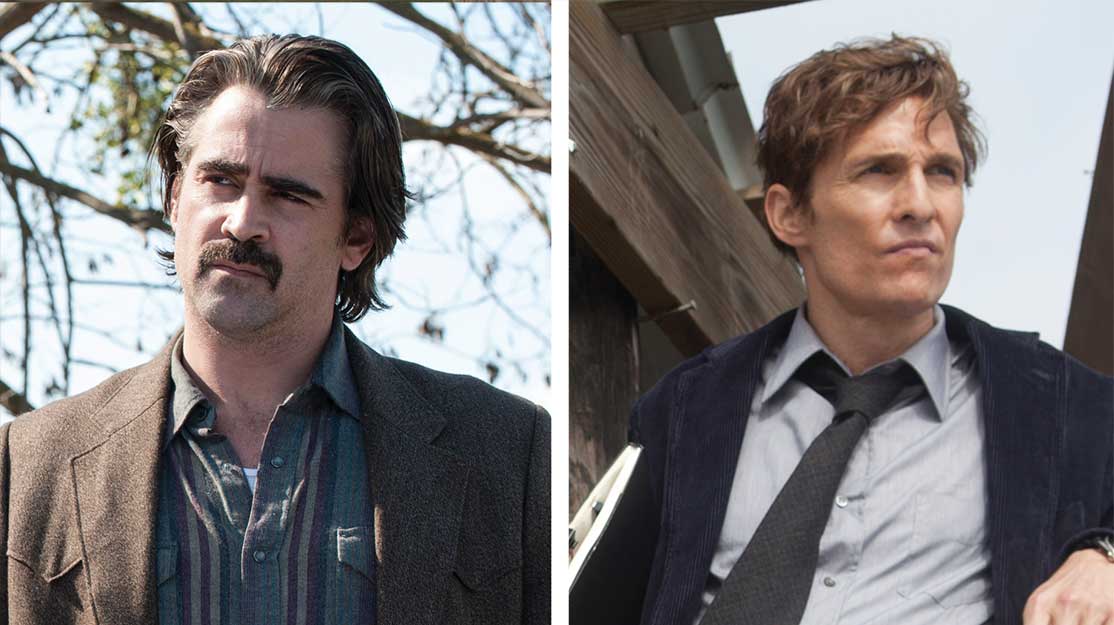 Just like starting over: The growth of anthology series

From American Horror Story and Black Mirror to True Detective and The Missing, it’s clear anthology series are back in a big way. DQ examines the reasons behind the revival, and wonders whether anthologies are here for the long run.

There was a time when television channels were awash with drama anthologies, the most iconic of which was Rod Serling’s sci-fi series The Twilight Zone.

Broadcast on CBS in the US between 1959 and 1964, it featured a number of young actors who would later become global film and TV stars, including Robert Duvall, Dennis Hopper, Leonard Nimoy, Robert Redford, Burt Reynolds and William Shatner.

There were two revivals for The Twilight Zone, in the late 1980s and in 2002/2003. But the TV industry had largely turned its back on anthologies by the 1980s in favour of movies, miniseries/serials and returning series.

By the 1990s and 2000s, miniseries and serials were also on the back foot, with both the US and the international TV business increasingly focused on long-running episodic or procedural drama franchises such as Law & Order, NYPD Blue, ER, CSI: Crime Scene Investigation, Grey’s Anatomy and House.

Episodic dramas still occupy primetime slots on many free-to-air channels in the US and Europe. But the last few years have seen another shift in the scripted TV industry’s centre of gravity.

With cable channels and subscription VoD platforms now major investors in drama, a parallel system – also involving public broadcasters like the BBC – has emerged that has reinvigorated the miniseries/serials format. Unlike episodic drama, the emphasis here is on single story arcs that stretch across a number of episodes.

A number of intertwined factors explain this revival of the miniseries/serial, including the heightened competition between broadcasters, says MGM president of international TV distribution Chris Ottinger.

“US cable channels see scripted shows as a way to stand out from their rivals, but there are now so many of them greenlighting shows that they need to go after the very best in terms of acting, writing and producing talent,” he says. “That talent is willing to work on TV but can’t commit to huge volumes of episodes or lots of seasons because of their busy schedules. That’s why we’re seeing projects with a specified end point, or with fewer numbers of episodes per season.”

At the same time, the fear of missing episodes that often underpins the episodic series format has receded, Ottinger notes. With more people time-shifting shows or binge-watching online, the notion of a drama series with a season-long story arc has come back into vogue.

SVT head of programme acquisitions Stephen Mowbray says audiences, like on-screen talent, enjoy the fact they do not have to commit vast chunks of their life to a single show.

“There is so much good stuff out there that audiences welcome the fact that some dramas finish after eight or 10 episodes, instead of demanding a five-year commitment,” he explains.

“For the audience, anthologies promise a well-written show with a great cast and a finite end. And for the broadcaster, they can also develop into a recognisable, returnable franchise with strong branding.”

Mowbray cites the example of True Detective (main image), the HBO series created by Nic Pizzolatto. “We aired it on SVT and it did very well, so we have acquired season two,” he says. “In season one, the audience saw Matthew McConaughey and Woody Harrelson in an excellent piece of TV. In season two, they then get to see Vince Vaughn, Rachel McAdams and Colin Farrell in a new story. But even though the characters and the locations change, they kind of know what to expect, which is of benefit to the broadcaster’s schedule.”

Mowbray’s assessment is echoed by All3Media International head of acquisitions Maartje Horchner, whose company distributes The Missing, one of the few non-US anthologies on the market. It is produced by New Pictures and Two Brothers Pictures for BBC One and US premium cable network Starz.

“In story terms, the main connection between the two series is that someone goes missing,” says Horchner. “But a lot of broadcasters that acquired season one have pre-bought season two, because they know they will get something similar. They know the writers and producers, so they are comfortable.”

Horchner also believes anthologies can make things easier for creative teams: “They have more freedom. Sometimes if the first season of a drama has been a success, the audience expectation is so high it is hard for writers to deliver with the same cast and situation. The anthology approach can take some of that pressure off the creative talent.”

Eric Schrier, president of original programming for FX Networks and FX Productions, dates the revival of the anthology series to 2011 – and sees it as part of the trend towards serials/limited series.

“The modern-day anthology series was invented by Ryan Murphy with American Horror Story,” he asserts. “Traditionally we were very scared of that sort of show. As a programmer, we want long-running series. The miniseries died 20 years ago and never returned, but now it has as limited series. They enable you to tell stories you wouldn’t otherwise be able to tell.”

Season one of American Horror Story, subtitled Murder House, was a big hit for FX. And it quickly became clear that Murphy had hit on something significant. In 2012, FX CEO John Landgraf said: “The notion of doing an anthological series of miniseries with a repertory cast has proven groundbreaking, wildly successful and will be trendsetting.”

American Horror Story is still running, with season four’s Freak Show among this year’s Emmy nominees. Season five, Hotel, will include Lady Gaga and Naomi Campbell in its cast, underlining the flexibility of anthology drama casting.

As predicted by Landgraf, American Horror Story has set a trend. FX is lining up American Crime Story, another Ryan Murphy franchise. Its first season is called The People v OJ Simpson and will star Cuba Gooding Jr (as Simpson), John Travolta and David Schwimmer.

Other cable channels are also getting interested in this trend. Heading to Syfy is Channel Zero: Candle Cove, which Dawn Olmstead, exec VP of development at Universal Cable Productions, calls a “season-long imaginative and chilling horror anthology.”

Starz is also anthologising. Having previously acquired The Missing and The White Queen, its big project for the autumn is The Girlfriend Experience, based on the movie by Steven Soderbergh.

The network has given a 13-episode order to the project, which explores the world of high-end escorts. Written by Lodge Kerrigan and Amy Seimetz, it will take the form of an anthology.

Starz managing director Carmi Zlotnik says: “We were captivated by the idea of two people attempting to control intimacy. It seemed to fit the modern age with the way social media has created a disconnect around direct human contact.

“Stephen proposed a season-long story arc and that made sense for us, with the prospect of a new season and a different cast and story. It’s great for optionality and great for storytelling.”

Zlotnik also shares Mowbray’s view that the anthology approach “suits audiences that like to know the length of the commitment they are going to have to make to a show.”

The first wave of anthology series in the 1950s and 1960s arrived, for obvious reasons, on free-to-air (FTA) broadcasters rather than cable broadcasters. So would it be possible for these new scripted anthologies to work on mainstream networks?

That depends on the show, says Mowbray. For example, US cable anthologies have limited potential for distribution on international FTA networks because of their adult-oriented content.

“Notwithstanding our success with True Detective, the sex and violence in US cable shows means they can’t usually play on FTA channels, especially in primetime. In our case we put US cable shows in 22.00 slots,” he says.

Ottinger agrees, explaining that it was clear from the outset that the critically acclaimed Fargo would be best suited to pay TV and subscription VoD. “We did deals with a few FTA broadcasters like Channel 4 in the UK and SBS in Australia. But Fargo’s subject matter and format made it more appropriate for premium platforms,” he says.

By contrast, The Missing first aired on the BBC so its less graphic formula opened up a broader mix of homes internationally, says Horchner. These range from Starz and Spanish subscription VoD platform Movistar to FTA broadcasters such as TF1 France, TV2 Norway, DR in Denmark and TVNZ in New Zealand.

The prospect of scripted anthologies appearing on free networks may increase in 2016. After FX’s success with the format, for example, its FTA sister channel Fox has also ordered an anthology series from Ryan Murphy.

Called Scream Queens, it is a comedy-horror series that will debut this autumn. Once it is on air, it will give a better indication as to whether anthologies can work for mainstream audiences.

NBC is also getting into the anthology game with Manhunt, a 10-part series to be directed by Gavin Hood. The plan is that each season of Manhunt will dramatise the mounting tension of a city as the authorities hunt for a fugitive roaming the streets at large. There are high expectations regarding the casting on this show, something that will then play into its international marketability.

Currently the US is driving the anthology trend. Aside from The Missing, the most prominent international example is critically acclaimed Australian series Underbelly, which tackled gangland culture across five seasons, starting with the modern day before covering a range of eras including the Roaring Twenties.

Channel 4’s teen drama Skins also used the anthology approach, replacing its cast three times over the course of a six-season lifespan. And there is a quasi-anthology feel to the upcoming second season of Top of the Lake, which will keep star Elizabeth Moss but will move the action from New Zealand to Sydney, Australia, for a new mystery.

Horchner hasn’t seen many non-US anthologies come across her desk. Her view is that “the market outside the US is more conservative. If we do see more anthologies it will probably be because season one worked well, so the broadcaster decides after the event to bring the show back – not planned anthologies like the US examples. But that may change if The Missing season two does well.”

It’s also worth noting that old-style anthologies were episode-to-episode, whereas the new wave is season-to-season. A rare attempt to recapture the golden era of episodic anthologies is Charlie Brooker’s Black Mirror, described by Endemol (the owner of Black Mirror prodco Zeppotron) as “a hybrid of The Twilight Zone and Tales of the Unexpected, which taps into our contemporary unease about our modern world.”

Comprising seven standalone stories, Black Mirror debuted on Channel 4 and “has sold better than we anticipated,” says Endemol Shine International CEO Cathy Payne. “The first episode has a plot about a prime minister being blackmailed to have sex with a pig, which gave us a few reservations. But it was picked up by SBS Australia, France 4 in France, TNT in Germany, SVT in Sweden, DirecTV and Netflix in the US and SkyTV in New Zealand, among others.”

Like her peers, Payne says anthologies allow for some amazing casting options. “Jon Hamm (Mad Men) was a fan of the show,” she reveals. “He got in touch and ended up in the Christmas special (the most recent of the seven episodes).”

While Payne doesn’t expect episodic anthologies to be in as much demand as seasonal anthologies, she says nothing can really be ruled out: “TV viewing habits have changed so much that audiences will watch anything that is good – they don’t care about format anymore.”