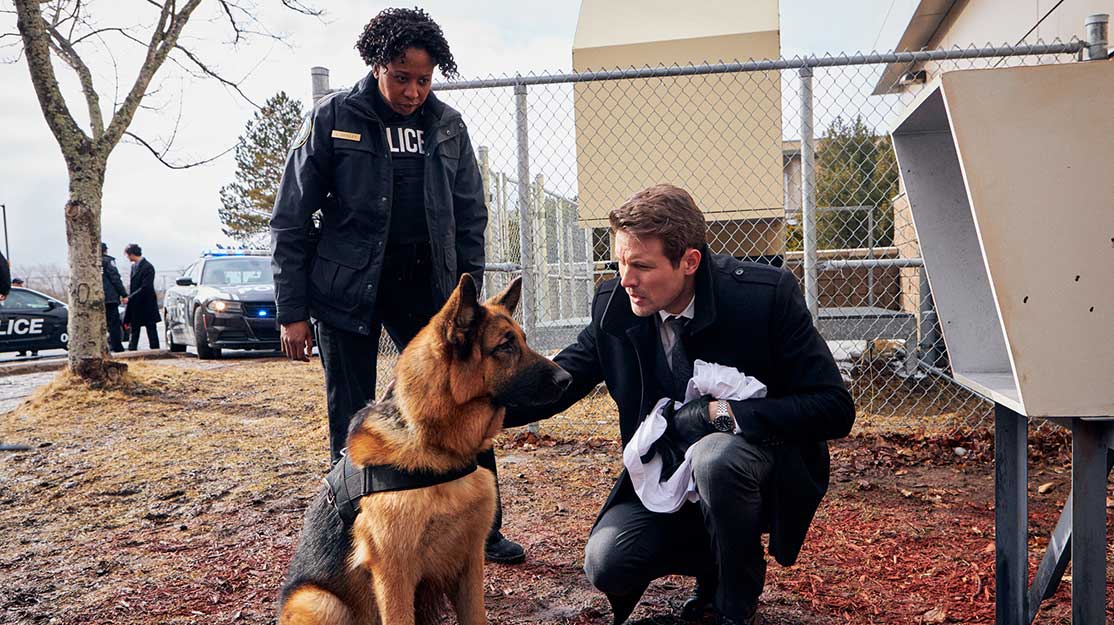 For 25 years, the story of a police officer and his canine partner has entertained audiences across Europe. Kommissar Rex (Inspector Rex) first aired in Germany and Austria in 1994, before going on a four-year hiatus in 2004, after which it was revived in Italy for a further eight seasons. The series has also been adapted in Poland (Komisarz Alex), Russia (Muhtar’s Return) and Slovakia (Rex), and has spawned spin-off Rex: Special Unit and TV movie Rex: The Early Years.

Now a Canadian remake has proven to be equally popular. Hudson & Rex debuted on CityTV in March and was quickly renewed for a 16-episode second season that will debut this fall. More than 2.5 million viewers tuned into the show’s first six episodes, making it the network’s highest-rated drama since 2015.

The action-packed procedural sees Charlie Hudson (John Reardon), a cunning major crimes detective for the St John’s police department, team up with an unusual partner in the form of Rex (Diesel vom Burgimwald), a former K9 German shepherd whose heightened senses keep Charlie hot on the trail of his suspects. During the series, they investigate an array of crimes, from a kidnapping to an art theft that results in murder.

Getting his big break on The Chris Isaak Show in 2001, Reardon has landed parts on series such as Tru Calling, Eureka, The L Word, Hellcats and Girlfriend’s Guide to Divorce. He has also played recurring roles in Van Helsing and The Killing.

Now a leading man, Reardon admits it’s tiring work, “but good tiring. It’s great,” he says. “There’s kind of a momentum when you’re really busy because you sort of just hit your stride. In our first season, we were only supposed to do eight episodes and then we ended up doing 16. So we were just going and going and going, but the network really loved it and immediately ordered more.

“It was great because I felt like every episode got a little bit better as we were shooting, and there was more and more action. So it’s been fun.”

The Nova Scotia native had just moved to LA when he first heard about Hudson & Rex, but passed it over as shooting for the series was taking place in St John’s, Newfoundland – a 4,000-mile, nine-hour flight away from his new home on the very eastern tip of Canada, a comparative stone’s throw from where he grew up. But a recommendation from his wife, fellow actor Meghan Ory, and spot of serendipity changed his mind.

“I just didn’t think it was a good fit at that time, but that was before I read the script,” he tells DQ at the Monte Carlo TV Festival, where his canine partner-in-crime Diesel is also in attendance with his handler, Sherri Davis. “My wife read the script when I was out running some errands. I came back and she said, ‘I think you should read this. Your character’s name is Hudson’ – our son’s is too.”

After reading the script, Reardon was hooked. Unable to attend an audition, he sent the producers a short film featuring several scenes and some footage of him with a dog that he recorded at a local animal shelter.

“It was just so they knew I was comfortable with dogs,” he explains. “It was all from a distance, though, so I think everybody was a little bit like, ‘Fingers crossed John and Diesel get along.’ We hit it off.”

Diesel, a three-year-old German shepherd, has pedigree with Kommissar Rex as he is related to Elch vom Trienzbachtal, the great-grandfather of the original show’s star. The series marks his first leading role on television and he was subsequently awarded an honorary firefighter diploma by the St John’s Regional Fire Department in recognition of his calm demeanour and temperament during filming for scenes that involved fire and explosions.

It’s a remarkable achievement considering that before production began, Diesel had never received any specific training for performing stunts or hitting marks. He had to learn verbal commands and hand signals for the show, many of which Reardon has also picked up.

“Sherri is so great. She just walked us through it and got us to spend as much time as we could together when we were on set not working. So we hang out a lot,” the actor says. “Then, every now and again, I’ll take him for a drive or something so he’s comfortable with me alone. We spend probably 12 hours to 15 hours a day together a lot of the time, so we’ve become two buddies.”

It’s clear Diesel is treated as more than just an animal sidekick on set. He could simply have been left to hover around the principal actors but, instead, the camera is specifically trained on him to capture his reactions and other shots.

“I had filmed with animals before and have actually shot with a polar bear, a pig and a few other dogs as well,” Reardon reveals. “Normally, in those circumstances, you’ll shoot the actors, and then you turn around and just shoot the animal, but the animal is not necessarily in it with you the whole time. With Diesel, he’s so good at what he does, he’ll be on set with us for the vast majority of the time. The show’s unique in that way. We really integrate him in if he is there with us the whole time, and we get some really great moments because of that.”

While the show follows a case-of-the week format, it also gradually reveals more about Charlie’s backstory, his dedication to the job and his lack of a personal life. That’s where Rex comes in.

“The first episode begins with straight action, so we don’t give any any backstory at all,” Reardon says. “But about halfway through the episode we talk about how he had a partner, a canine officer, who had been killed. As a detective, I got called to the scene and Rex was protecting the body. If nobody in the police department takes the animal of a deceased canine officer then the dog is euthanised. So I took him home for a couple days to find a new home and then just kept him. And when I meet Rex, Charlie is recently divorced. So it’s kind of fate that they found each other.”

It’s that central relationship that makes Hudson & Rex stand out from the plethora of other police procedurals on television, with Diesel proving to have as much presence on screen as he does in real life. Reardon is quick to emphasise, however, that it’s more than just him and his four-legged friend that make the show work.

“What I like about it is the relationship because it’s a full team, there’s a team of a team of five of us [in the main cast]. So it’s myself and Diesel and then we have a tech specialist, a forensics specialist and our superintendent. The difference between our show and the original is it really follows an ensemble cast; we always work as a team to solve the case.”

With the success of the format already established and viewers’ steady appetite for procedural dramas continuing, Hudson & Rex can expect to solve many more cases together in the future.