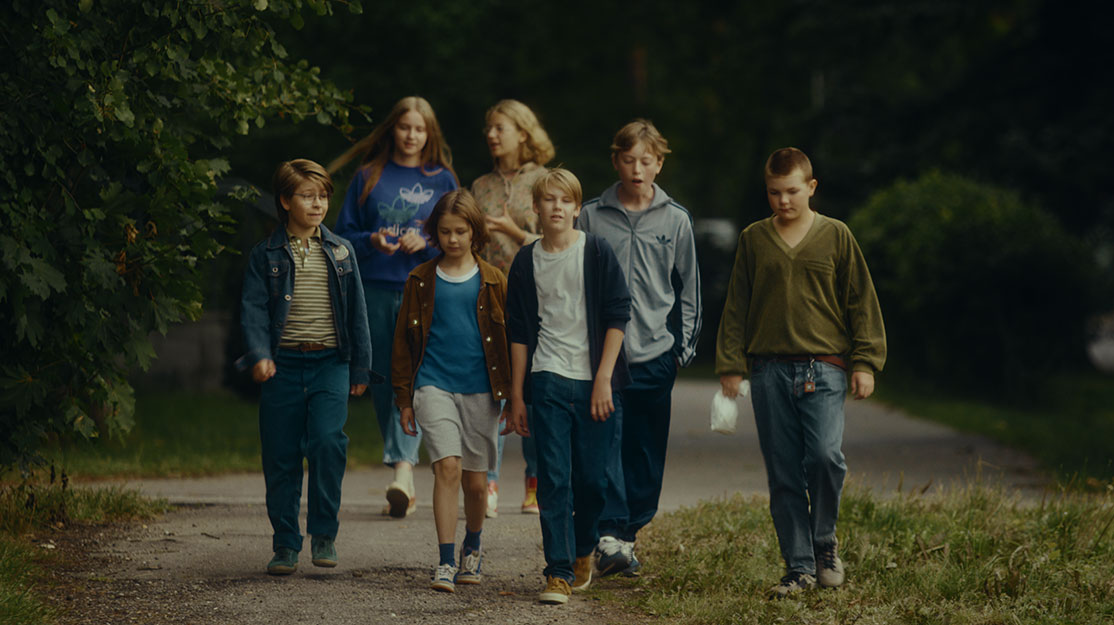 Finnish director Jani Volanen tells DQ how an unmade film script formed the basis of coming-of-age mystery drama Munkkivuori (Summer of Sorrow), about one boy’s summer in a town where a young child has gone missing.

For 10 years, a film script by Finnish writer and director Jani Volanen was left unmade. Told from the perspective of a young boy, the story followed him as he investigates a crime in his neighbourhood.

The film was due to be made in 2007 with another director, but when they ended up passing on the project, Volanen decided to stow it away.

“But I wasn’t too sad about it because it was the first script [I had written] that I was going to give to someone else to direct, and there was a reason – it had kids in the lead,” he tells DQ. “I thought I couldn’t direct children, I wasn’t ready then. That was why I gave it away, and I felt queasy about that. That he didn’t make it was sad and great at the same time.”

Fast-forward to 2022 and Volanen’s film script has been transformed into a 10-part TV drama called Munkkivuori (Summer of Sorrow) that blends crime and mystery with a coming-of-age story set in the 1980s.

Playing out across one fateful summer and seen through the eyes of children, the story takes place in the real Helsinki suburb of Munkkivuori, where the disappearance of a young child forces adults in the neighbourhood to take justice into their own hands – with tragic consequences.

For the kids living in the area, information is in short supply. So, led by Mirko, a 13-year-old boy who moves to town with his family at the start of the summer, they become detectives themselves, leading to the discovery of neighbourhood secrets that test teenage friendship, love and loyalty.

The project was created, written and directed by Volanen, who says it is quite different from his previous works, which include comedy-drama M/S Romantic and comedy series Tripla, Putous and Ihmebantu.

“Maybe someone else can see some connections there with themes or thinking or humour, but in my book, it’s very different from anything I’ve ever done. I started out in comedy and did that for a very long time. The last drama series I made was funny too. There’s some humour in this, but not to the extent I’ve always done. This is more dramatic,” he says.

Produced by Rabbit Films for local streamer Elisa Viihde Viaplay and distributed by Keshet International, the show’s journey to getting a green light was as untypical as the origins of the project.

Volanen had been hired by Rabbit as its first head of drama and started writing his own material while taking calls and emails about other potential projects. A slate of 30 ideas were whittled down to five, which were taken out to broadcasters back in 2017 with a view to landing a commission.

“This one wasn’t included in the five, this was in my back pocket and my CEO said, ‘If they don’t seem to be interested in the five, then you use this one.’ That happened in two places, where they were immediately interested in this one, even though at that time this idea had absolutely no content. It was just an idea,” he remembers. “It was a bluff, really, with a beautiful photo and some mysterious text attached. They jumped on it and that led me to really consider it as a project. But this wasn’t the one I was trying to sell. It sold itself.”

Having expanded his original film script, Volanen says one episode makes up what the film might have been. But the main concept remains – a story told through the eyes of children who are not told the truth, who do not have the internet or mobile phones and can only rely on rumour and speculation.

“If you look closely, scenes with the parents only happen when children are present, so they can see or hear what’s happening,” he says. “I give some clues through the series to give enough information [for viewers] to understand the ending, but it was clear to me that all the discussions between the adults should only be possible for the audience to see or hear when a child is present.”

Unsurprisingly, the younger characters are then left to deal with an assortment of misinformation and misunderstandings as they try to work out what exactly is going on.

“It’s like watching the shittiest detective ever – it’s a detective who doesn’t get to see any clues unless he or she stumbles upon it and then doesn’t understand half of it,” Volanen says. “But in this series, it’s spread between a couple of kids. It’s not only Mirko that we follow. When we get to later episodes, we follow it through another kid’s eyes, and that means no one kid has all the info.”

The mystery of the disappearing child largely remains in the background as the story focuses on the group of teenagers at the heart of the story. “It doesn’t concern the kids. They don’t really give a shit, in the end, about the missing kid, so why should the story?” the filmmaker adds. “They discuss it briefly and move on to other things. That was my logic, because this is a story mainly about one boy and his summer.”

Volanen compares writing and directing a project to climbing a ladder, with each rung marking a different stage of the process. “When I’m writing, I’m not thinking any realistic thoughts about how the hell we’re going to do it; I just write. And then when it comes to paring down the script and somebody says, ‘How the fuck are we going to do this?’ I say ‘I don’t know, I just wrote it. You tell me.’ Then I’ll have to figure something else out.”

But while he may write the scripts himself, Volanen never comes up with the story on his own. He reveals that the unused film script was the first and only thing he ever created entirely alone – and it was his wife, fellow actor and writer Pirjo Lonka, who worked with him to build the story and characters of Summer of Sorrow.

“I had some ideas already and but I’m open to new ones,” Volanen says. “I had a pretty set ending to the story and she changed it. She changed everything. I was fighting against it but then I saw she was right and so I had to change it. But I like to work in a team. When I write, I write by myself and then I let the people who have worked with me read what I’ve done. I get their opinion and, if they say something useful, I’ll change it.”

When asked if the fact he writes and directs his own work makes him an auteur, Volanen jokes that it just highlights his “limitations as a person.”

“I don’t write for anyone else but I don’t direct anything I haven’t written for myself,” he says. “That’s an equation with only one outcome. That doesn’t make me an auteur, that just makes me a really selfish guy.”

With a directing education rooted in comedy and having worked on a sketch series that parodied every genre of television, Volanen can draw on a broad skillset behind the camera. But for Summer of Sorrow, he took a fairly standard approach to filming.

“It’s normal and boring, like in the 80s,” he says. “That was my excuse, anyway, because we didn’t have time or money for any beautiful dolly shots or drone shots. So I said let’s make it as simple as possible and pretend it’s our stylistic direction. I wasn’t upset by it, I felt it suited the story because there’s no fancy camerawork, there’s no fancy anything. It’s very basic stuff. There’s one tracking shot in the very last episode and that’s it.”

But if he didn’t want to direct the original film script because he was unsure of working with children, how did it work out for him on the set of Summer of Sorrow?

“I was uneasy and unsure this time too,” he admits, “but I decided early on I would treat them like adults, so that made it easier for me. I didn’t have to treat anyone differently. I was speaking to them exactly how I spoke to the adult actors standing next to them. I just took that chance. They’re not stupid and I don’t have to talk down to them.”

With the show set in the 1980s, plenty of work was needed to authentically recreate the children’s homes and design a courtyard where they spend a lot of their time. “Everywhere we went, there were six different directions we couldn’t point the camera because of something [modern], and we didn’t have the luxury of saying we’d fix it in post,” Volanen says. “Sometime we had to shoot in a very cramped way to avoid everything outside the frame that would have immediately said, ‘You’re in the year 2022 now.’”

Volanen makes it clear, however, that Summer of Sorrow isn’t a celebration of the 80s and all the cultural notes – for example, the music and the fashion – that come with it.

“You’re not going to hear songs on the radio from 1983 because it’s meant to be 1983,” he says. “In some shows, they show you the 80s. But the 80s in Finland was similar visually to 1976 in the US. We were that far behind in everything – the cars, the technology, the clothes. Nothing, I hope, will point out exactly what year this is happening in, and it doesn’t matter really. The only thing that matters is these kids don’t have cell phones or the internet.”

Shot in just 92 days, a month less than Volanen would have preferred, making Summer of Sorrow was “gruelling, hard and very fast,” he says. What audiences will make of it – it debuts on Elisa Viihde on October 16 – he doesn’t know, except to say that this is a story he wrote for himself and he hopes it will resonate with viewers.

“There’s a song played in the courtyard, a very tragic song sung by a girl, and it was those lyrics that came to me first,” he says. “Then I was cycling around Munkkivuori, where I used to live. It’s such a beautiful place, so green and peaceful, and I was thinking, ‘There’s got to be something wrong inside there.’ Then the screenplay from 2007 was the third thing.

“Those three [elements] clicked together one night and I took a notepad and started writing. That’s how it started, but I didn’t know what I was writing, I didn’t know what it was. There was no need to tell this story. It wasn’t high concept. It came from brainstorming with my wife. We talked for a month and it grew from there.”