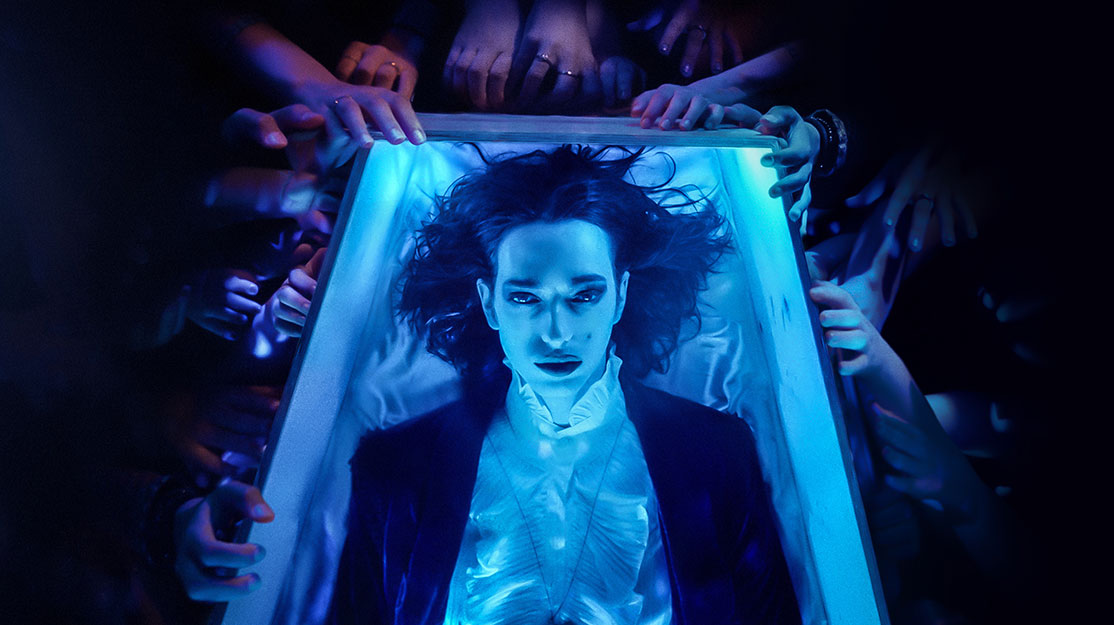 Journey to the Moon

Moon Years dramatises Aviv Geffen’s journey from complicated teenager to the biggest rock star in Israel. He and producer Hadas Mozes Lichtenstein reveal how they turned his life into a musical biopic.

Best known as a rock star, singer-songwriter and music producer at home in Israel, Aviv Geffen can now add TV showrunner to his list of accolades. He has created and written Moon Years, an eight-part scripted series based on his own life, from his teen years growing up among a family of well-known politicians and artists to becoming a musician and a voice of his generation.

Produced by ADD Content for HOT and directed by Ohad Perach, the series is set in the 1990s and paints a portrait of a generation as it tracks the beginnings of Geffen’s music career. It charts pivotal political, historical and cultural events in the period and leading up to the night Israeli Prime Minister Yitzhak Rabin was assassinated just moments after sharing a stage with the singer at a peace rally in 1995.

Here, Geffen and ADD Content’s Hadas Mozes Lichtenstein discuss their collaboration on the series, which debuted locally in March, why he feels like Israel’s Forrest Gump and how he used his family home videos to plot the course of the story.

Aviv, introduce us to the story of Moon Years.
Geffen: This show is set in 90s Israel, which was, at the time, a bit like the 1969 Summer of Love in the US, in that we were so naïve – we all dreamt of having real peace with our neighbours and it felt like there was so much opportunity and positive energy in the air. Plus, it was the time before the internet. Rock music was at its peak and, following events such as Live Aid, music was seen as unifying force for good.

How did you come to write a series based on your own life?
Geffen: In some ways, I feel like the ‘Forrest Gump’ of Israel in that, purely by accident, I was present at some of the most historical moments in my country. The stories in the show are me wanting to tell my story to the generation who lived through those times, and to tell the younger generation about that period in history.

How did you approach what the series would be about?
Geffen: Well, I have taken a different path from other members of my family, who are high-profile and traditional, as I’m the one who rebelled against the macho expectation of what I would do with my life. My passion was music, and I was asking a lot of deep and hard questions about Israeli culture and politics while also wearing makeup and clothes in the glam rock style, which was groundbreaking in Israel at the time.
I was the same age as my fans, so my journey was reflected in their lives, and it felt like we were all part of a movement. In the show, we wanted to capture the essence of this time when the youth in the country were experimenting and seeking a new direction – one of peace and creativity.

How did you balance the factual and fictional elements?
Geffen: Every scene in the show is based on a true part of the story – I even have some tapes from my mum’s video camera which helped capture some of the details. The authenticity was important in capturing this transformational period in our history.

What key events from your own life did you want to include, and how did you shape the story around them?
Geffen: It was 1989 when I first realised I was a different person from the rest of my family, the black sheep who was going to do things differently. My love of music led me to write songs and my hope for peace led me to know Itzhak Rabin, who was the prime minister. In fact, I was the last one to hug and talk to him before he died and was one of the main witnesses of his assassination. It was a dark day when not only a great politician passed away but also the optimism of the time.

How did you want the political events portrayed in the show to play out against the backdrop of your music career?
Geffen: I don’t believe you can be a true artist in Israel without being politically engaged. I made an active choice early in my early career to be an artist who writes songs to make a difference.

Hadas, what interested you about working with Aviv and telling his story?
Lichtenstein: Aviv is one of the most inalienable cultural assets in Israel. He is regarded as an extraordinary artist and his work has affected so many lives. We couldn’t have been more excited to be working with him and telling his well-known story from his perspective.

How did you develop the series together?
Lichtenstein: This one is actually very special as Aviv served as full showrunner of the show, so our job as producers was to assist him in bringing his world and this period in history to life.

Aviv, what was your writing process?
Geffen: As authenticity has been central to this show, I initially worked from the private video archive of my family and plotted the key moments of each year and how the right and left wings operated and led us to the point of the assassination. Then, once we had the timeline of the story, I looked at dialogue and capturing the zeitgeist of the period. It also looks at my relationship with my family and culture in a time before social media. And although this a personal journey for me, I think these are themes that audiences will be able to relate to.

Where was the show filmed and how did you recreate the 1990s?
Lichtenstein: Most of the show was shot in Tel Aviv, the incredible Dead Sea and the Sea of Galilei. We used locations that haven’t changed a lot since the 90s, but we also had to source many props and costumes to create an authentic atmosphere. One challenge was finding preserved vehicles from the period. We could also rely on post-production to use different effects to hide elements that didn’t exist back then, such as iPhones.

What challenges did you face and how did you overcome them?
Geffen: The challenge was to make it a nostalgic piece of art and capture the light and positivity of the years before the assassination, but not to make it so sweet that you ignore the undercurrents that led to Rabin’s murder. It needs to be resonant today so that audiences understand why this period was a turning point and, more broadly, how it relates to the global terrorism of the world today.

Why do you think the series might appeal to viewers in Israel and around the world?
Geffen: Israel is a small market but an important one. We are often in the headlines overseas, in a good way and a bad way, but maybe not everyone will know about this time in history when there was real hope for peace, unsullied by social media and before terrorism became a daily feature on the news.
I feel very fortunate that my career, although it has had unusual twists and turns, has given me the chance to tell this story of my family, of music, of a period that was full of optimism, and of our politics and leadership. I hope this show will be enjoyed outside of Israeli, and I will continue to write music and aspire for peace in our region.

Lichtenstein: In Israel, people are very familiar with Aviv and his family, their personalities and vocations, as they are household names. But we aren’t simply exploring Aviv’s personal story as an artist, we are telling his story as a character-driven piece about the relationship with his family and especially with his father and how that affected him and, therefore, dealing with a universal story. And a good story is a good story, no matter where it comes from and what language it is.

Hadas, many Israeli series have been remade overseas. Why do you think Israeli drama generally has made such an impact on international audiences?
Lichtenstein: Israel is both fortunately and unfortunately a small market. I say unfortunately because obviously we don’t have the budgets for most of the things we would love to do, but fortunately because that makes the creative community work even harder on our storytelling. We don’t have the money for the wow factor, so the narrative and characterisation must be top notch.

As viewers watch more series in foreign languages, is there still a market for remakes?
Lichtenstein: Yes, 100%. What’s great about a remake is that the essence of the show stays, but you can localise it and make it more relevant for your audience culturally or demographically. For example, look at Euphoria, which we took to HBO as an Israeli original. The new version has been an incredible headline hit for them.
Then, on the other side, there is Fauda, which we sold as an original first season to Netflix that has done very well for them. There is room for both, plus we’re finding, as a distributor, that there is a secondary market for the original series if the remake has been a hit.

What was it like working with HBO on Euphoria and why do you think the show has been so successful?
Lichtenstein: My experience with HBO and the entire team behind the US version of Euphoria has been great. It’s been an incredible journey to see the show evolve from the original to now three seasons, and Zendaya and the rest of the cast are outstanding.