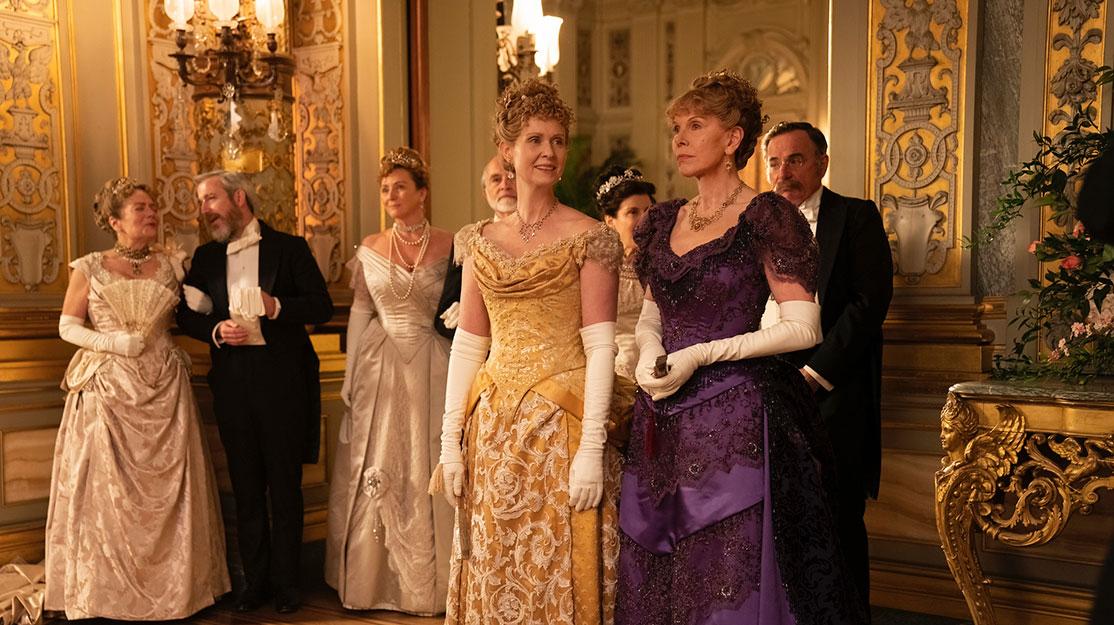 Bob Shaw takes DQ into the world of HBO’s The Gilded Age and reveals how his own interest in US history helped him build the world of Downton Abbey creator Julian Fellowes’ latest period drama.

From the New Jersey home of Tony and Carmela in The Sopranos and the Atlantic City promenade in Boardwalk Empire to the halls of Mad Men’s Sterling Cooper advertising agency, production designer Bob Shaw has had a hand in creating some of the most iconic sets in modern television.

His small-screen credits extend to 1960s-set airline drama Pan Am, while his movie work includes Martin Scorsese duo The Wolf of Wall Street and The Irishman.

From a glance at his eye-catching CV, it’s notable just how many of Shaw’s projects have involved recreating the past – part of the appeal of the self-proclaimed history enthusiast’s job. Yet none of them can compare to the scale of his task to recreate life in 1880s New York for his latest series, Downton Abbey creator Julian Fellowes’ long-awaited period drama The Gilded Age.

The show, which debuted last night in the US and lands in the UK on Sky Atlantic and NOW today, is set against the backdrop of a period of immense economic change and growing conflict between old and new. It opens in 1882 as young Marian Brook (Louisa Jacobson) moves from rural Pennsylvania to New York City after the death of her father to live with her ‘old money’ aunts Agnes van Rhijn (Christine Baranski) and Ada Brook (Cynthia Nixon).

Shaw describes The Gilded Age, filmed on a purpose-built backlot in Long Island, New York, as well as on location at stately homes in New York and Rhode Island, as “probably the biggest build I’ve ever done.”

“Boardwalk Empire was a large build but the boardwalk, for example, didn’t have the burden of reality because it was sort of a toy town with all these little amusement piers, saltwater taffy stores and things that were all very fanciful,” he tells DQ. “It was meant to be a playground, so it was easier to fudge. On The Irishman, we had like a staggering number of sets to do, but there was nothing like the Russell house [in The Gilded Age]. Bertha’s bedroom has 350 yards of imported Italian silk. The chandelier in the Great Hall has almost 10,000 crystals on it. Everything was big.”

For Shaw, the series has been more than three years in the making, though Fellowes himself has been working on the project for around a decade. US network NBC originally announced a series order in 2018, with the show set to launch the following year. But in 2019, the drama moved to HBO. The premium cable network coproduces the series with Universal Television.

Shaw has been interested in the history of New York City since his university days, and already had a wide range of relevant history books on his shelf when he first heard of a new series set in the Gilded Age.

“As soon as I heard about the project and that they were interviewing, my reaction was, ‘I want that one.’ I went in and I guess I said the right things when I met them because I was driving home and got a call saying they wanted me to do it. It was kind of a dream.”

He then spent a lot of his spare time listening to audiobooks about the real Gilded Age and prominent families of the time, such as the Vanderbilts, while a perk of the job has been the opportunity to visit numerous historical properties, particularly around Newport in Rhode Island and Troy and Tarrytown in New York.

New York City, however, has moved with the modern world and Shaw very quickly made a decision to build a backlot containing a partial block of East 61st Street as it would have looked in 1882, not least because he felt this would be the best way to demonstrate the “very specific” relationship between the rival Brook and Russell families.

“We had so much written for both houses that we had to build them,” he says. “That’s always a great joy. Trying to find exteriors that you can work with and make look like it’s 1882 is terrifying because you have the modern world closing in around you in all directions. And in the time I’ve been doing it, it gets more challenging all the time.”

The backlot had stages big enough for the grand Russell house and the Great Hall, which stood 30 feet high. The Brook house was built on a different sound stage in Queens, while the production office was in Brooklyn. “It’s sort of all over the place,” Shaw says.

However, not everything was built. For example, while balls were a big part of society life, they wouldn’t feature in the series frequently enough to require an entire set be constructed. Similarly, the production used the billiard room at Newport’s historic Breakers mansion for one scene, but the characters weren’t such avid pool players that a replica room needed to be built.

The real treasure trove, says Shaw, was the city of Troy, which sits beside the Hudson River in upstate New York and previously appeared on screen in Scorsese’s 1993 feature The Age of Innocence.

“There aren’t that many things in New York that are from before 1890, but Troy sort of stopped in time when the railroads came in. Things were not transported by canals and by the river as much, and the town suffered a decline. But it was never subject to being demolished or rebuilt.”

One area called Washington Park afforded the production exteriors that date back as far as the 1840s, “which is a tremendous thing for us,” Shaw adds. “We made great use of Troy because it’s very hard to do in New York. Certain restrictions and certain ways of operating with the pandemic made New York even more challenging.”

As evidenced in the series, Shaw characterises the period of the Gilded Age through its tremendous craftsmanship, with wood and stone carvings and other architectural details found in every corner of the show’s lavishly decorated homes.

“It can be a little depressing if you think the equivalent person in today’s world is probably working at a fulfilment centre somewhere for Amazon or something,” he says. “That’s the level of detail, the level of craftsmanship in all their lives, even in working-class people’s lives. You always get a connection with people. You go to a church and I get less of a feeling of divinity than I do of humanity. I think, ‘Well, somebody could have spent their whole life working on this one apse.’ It’s an interesting thing.”

There are also connections to people who existed at the time. Coon’s character Bertha Russell is influenced by Alva Vanderbilt, “who was a force to be reckoned with,” Shaw says, so her bedroom was also inspired by Alva’s room at the family’s Marble House in Newport.

“If you really look, you can see that the Russell mansion is Newport’s greatest architectural hits,” he reveals. “I can say that this floor is similar to Marble House and this fireplace is similar to the Breakers. And then a wall treatment that was in carved stone, we saw at Ochre Court, which is another property there. If anything, it was about trying to stay focused and not just going crazy and saying, ‘I want this and I want that and I want the other’ – trying to put it into a cohesive look.”

With so much to build before shooting could begin, Shaw was given a lot of lead time to prepare the sets in advance. The art department began concept designs in August 2020 ahead of a filming schedule that began in March last year. What made his job even more complicated was the need to have multiple copies of numerous items. For instance, a dinner scene would require more than a dozen matching chairs, which meant sourcing furniture, often from people who would have stored it away in barns or sheds.

“No one’s really interested in Victorian antiques for the purpose of furnishing their home, but then you have to find it, and it’s hidden in all sorts of strange places,” Shaw says. Then when the production moved to a real location, cast members couldn’t sit on antique furniture, so Shaw and his team were required to empty the room before refurnishing it, “which is a shame when it already looks perfect.”

“These people had so much furniture and their rooms were so big,” he says. “You would look in their drawing room and they would have three parlour sets, meaning three distinct sets of a settee and three chairs. They just ate furniture. And they had this peculiar thing of being hung up on everything coordinating, so the drapes and the three complete parlour sets would all be done in the same upholstery. Sometimes we would pick a swatch of fabric and then call the company and say, ‘Do you have 400 yards of this stuff?’ Often they don’t, or they say, ‘Yes, we can get to work and we’ll have it for you in nine months.’ We work on a different timeframe from the rest of the world.”

Across a screen career spanning more than four decades, Shaw has witnessed first-hand the changing demands of TV and film on the work of production designers. But it is The Sopranos, a watershed series that forever changed the ambition of TV drama, that he says had a particularly indelible effect on his work.

“The scripts were at a different level and it was like we were doing a film every week,” he says. “It used to be, in television, that you’d be guaranteed there would be certain key sets. If you did Law & Order, there’s a scene in the DA’s office and there are several scenes in the courtroom. Now the scenes are shorter and there are more locations. Then as television upped the ante, film did even more so. On The Irishman, there were more than 300 sets and locations. In one case, we built a period 1950s barber shop for one shot.”

Shaw admits he doesn’t know how economically sustainable that approach to production design is, but he recognises that audience demand for ever-increasing standards means he is often bowled over by the work of his peers.

“There is a different level of expectation of reality,” he says. “There are so many period shows on television now, so many of these medieval epics. I know how to do the shows I do, but I look at other people’s shows all the time and say, ‘How did they do that?’”