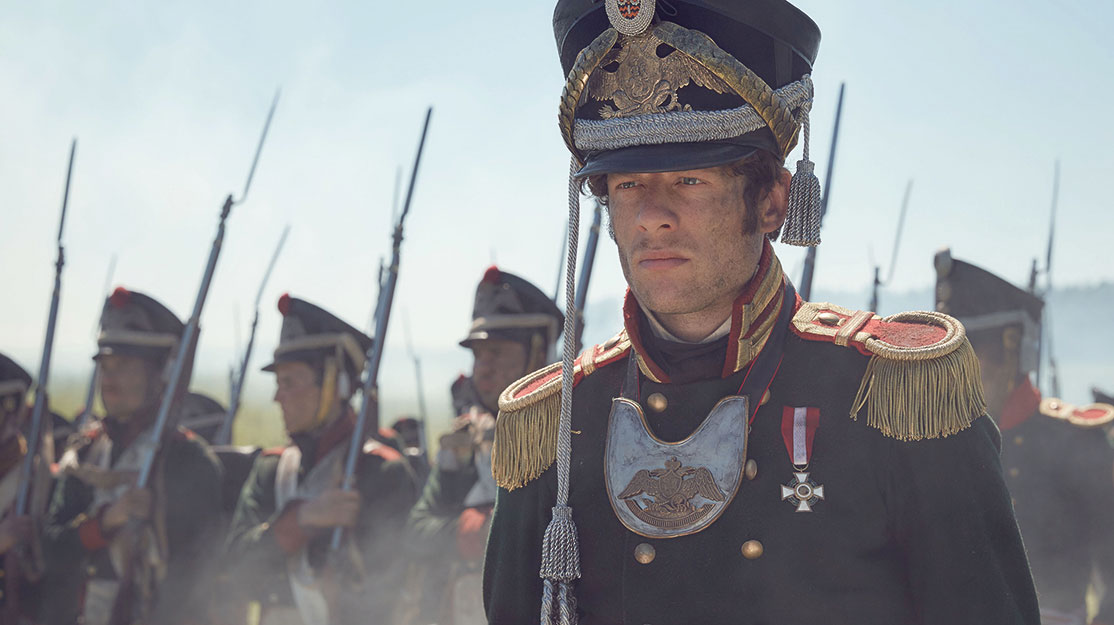 Paul Biddiss gives DQ an insight into the role that has seen him work on series such as War & Peace, Catherine the Great, Taboo and Strike Back.

The life of a military advisor can be a varied one, as Paul Biddiss has discovered, from spending the day coordinating the funeral of a dictator on the set of Armando Iannucci feature film The Death of Stalin to standing beside Batman, Wonder Woman and Aquaman as preparations are being made to shoot another funeral, this time for Superman in Justice League.

After leaving the British Army following a 24-year career in the parachute regiment, Biddiss spent some time working in security, doing protection and surveillance work. Then when he replied to an advert seeking ex-military personnel to play extras in 2014 war movie The Monuments Men, he found he was in the right place at the right time to offer director George Clooney some advice.

“They did have a military advisor but he was on another set, and he had an assistant who was halfway up the road trying to sort a convoy out,” Biddiss recalls. “I’d never thought about any career in the film industry, and I definitely didn’t think about military advising. It never crossed my mind.

“They were doing a scene where they wanted me and another guy to walk out the lead Land Rover and walk towards John Goodman and just look at him. I said, ‘Can I just make a suggestion? It’s D-Day plus four – you’re not going to drive right up to a burning wagon. You’re going to stop because it could be an ambush. You’d get out, survey the area, and then maybe walk forward just to get a better understanding.’

“[Clooney] looked at another guy and just nodded and went with it. And that was it. That was my first insight and my first piece of advice, which was taken and used. From then on, I got the bug.”

Biddiss was then asked to conduct boot camps for another war film, Brad Pitt-starrer Fury, in which he selected and trained 300 extras to make up the members of Baker Company, while also performing as an actor himself. But he describes being appointed military advisor on BBC drama War & Peace as his big break

For the six-part adaptation of Leo Tolstoy’s epic 19th century novel, he ran auditions to find actors who could both portray soldiers or ranked officials and meet the physical demands of battle scenes. He then oversaw their training.

“Because it was the Napoleonic era, I had to read up on how they were trained, and then I gave that training to the actors in the same way,” Biddiss explains. “The boot camps consisted of weapons training, weapons safety and drills, which are appropriate for whatever rank they are. Then we’d do historical lessons and then maybe some battlefield scenarios [looking at] how they would communicate with each other.”

Since breaking into the industry, Biddiss has gone on to work in a variety of military advisor and consultant roles on films such as Jason Bourne, Murder on the Orient Express, Tolkien and recent Oscar winner 1917, while his small-screen credits include Taboo, The Crown, Vanity Fair, Black Earth Rising, Pennyworth, Catherine the Great and Gangs of London. Among these are a large number of costume dramas, covering a wide period of history.

“On War & Peace for example, I got three days’ notice,” he reveals. “I’d never touched Napoleonic warfare before. I just got my face into books and found journals by soldiers who were there. I will look up both officers and the enlisted ranks so I can get an idea of the relationships between officers and men. I did that for the Russians and I did that for the Napoleonic army for the French, because there was a different attitude between them.

“Then when I come to the boot camp, I can talk them through the equipment, how it goes on and where it goes. There’s nothing worse than extras going into costume and they haven’t got a clue what it’s about. I like to be able to save a lot of time on set, and time is money. Those guys should know how that kid should be fitted and, as long as the costume department is happy with it, the guys can do it themselves because they’ve been trained. That’s all part of the process.”

Once the cameras are rolling, Biddiss will conduct risk assessments and ensure health and safety guidelines are followed, particularly when dozens of soldiers are carrying bayonet-fitted rifles. He’ll also be beside the director, watching the action unfold on a monitor and making suggestions if something isn’t quite authentic – though he stresses that he’s always aware of the need to balance between authenticity and entertainment.

“I know it’s not a documentary. There are going to be things that have to be cheated,” Biddiss notes. “I’m not bigger than the film. I’m just part of that small machine, and my job is just to advise.”

Earlier this year Biddiss completed his second season working as military advisor on Sky and Cinemax’s action thriller Strike Back, which returned for its eighth and final run in February. The show follows the missions of Section 20, an elite, multinational, covert special ops team that travels around the globe taking on a vast web of interconnected criminal and terrorist activity.

Utilising his expertise, Biddiss says he was involved in helping showrunner Jack Lothian and the producers shape the story from the outset, as well as providing guidance about what kinds of missions or weapons could feature. “It’s a pity more shows don’t actually get the military advisor in the writers room,” he says. “They’re able to start working with all the various departments a lot quicker than if they were brought on maybe two weeks before the show starts filming.

“For each episode, I’ll also get the script well in advance so I can start putting in some military and technical jargon for radio procedures. Then we’ll do the boot camps and get the actors confident with the weapons.”

He’s particularly proud of his work with director Bill Eagles to produce a one-shot gun battle scene in season seven, which was filmed in Malaysia and lasted more than four minutes. “It all fell into place. It was just perfect,” he says. “It didn’t get as much praise as I thought it should, unfortunately, because it’s a very niche audience. But it was something I was really proud of. It was done in a very short period of time. There weren’t lots of rehearsals.”

Biddiss says a military advisor’s role is relatively straightforward, provided they respect every department and are willing to work with them to get the best results. “My job is to work with people and not get in their way,” he adds. “It’s not just the costume designer, the director or the actors, but even the supporting artists. You’ve got to look after the people you train. If you get that right, then actually everything else is quite easy because you’ll have everyone on side and everyone will be receptive to any suggestions you give.

“The main thing for me is I just really love my job. That’s the icing on the cake.”