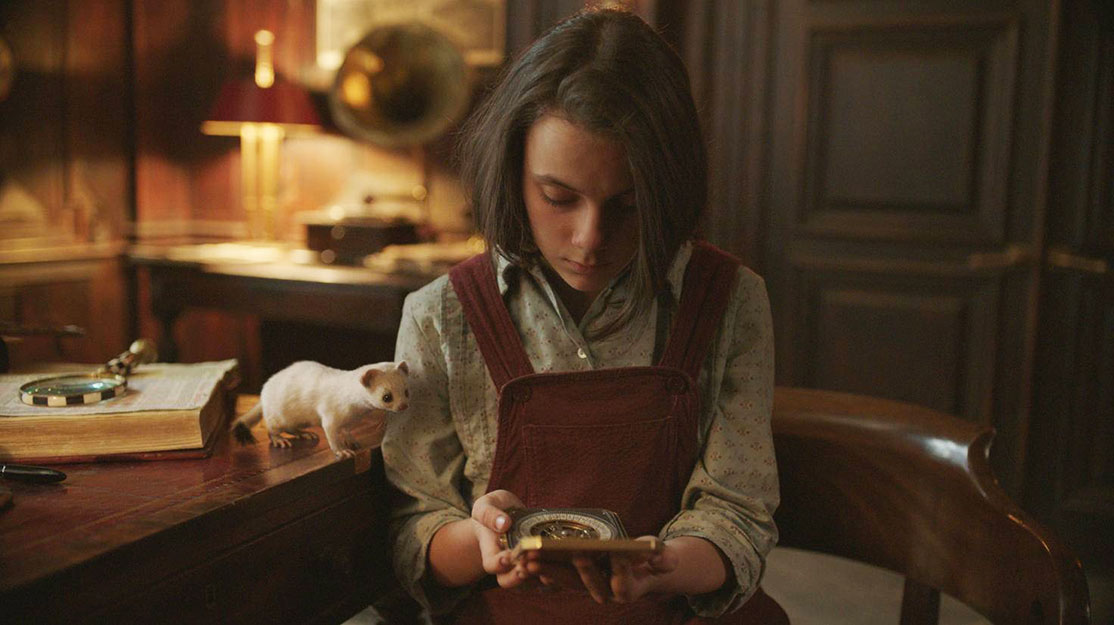 Gemma Randall, graphic art director on the BBC and HBO’s epic drama His Dark Materials, gives DQ an insight into her role and how she helped to shape the televisual world of Philip Pullman’s iconic literary series.

Among the spires and chimneys of the Oxford skyline, the English backdrop for the BBC and HBO’s His Dark Materials, airships fill the sky of this familiar yet ethereal landscape. In this rich and beautifully realised world, where every person has a dæmon at their side – the animal manifestation of a human soul – there is something to marvel at in every frame.

But look closer, to the portraits hanging on the walls of Jordan College, where the story’s heroine Lyra lives, to the street signs around Oxford and the symbols that adorn the compass-like alethiometer, and you will see the work of the graphic art team led by Gemma Randall.


Randall first broke into the industry by joining the props department on Joe Wright’s 2005 film Pride & Prejudice, before working on TV series including Upstairs Downstairs, Doc Martin, The Five and Howards End.

Now as a graphic art director on a high-end, high-concept television drama, she oversees a lot of creative decisions that contribute to the look of the show, from a graphic or pattern to the design of wallpaper or a carpet. With a series such as His Dark Materials, written by Jack Thorne and based on Philip Pullman’s celebrated trilogy of novels, there were no end of decisions to make.

Taking her cue from the concept art commissioned for the series, which is produced by Bad Wolf (A Discovery of Witches) and New Line Cinema, Randall would oversee the design process for all the graphic elements of the series while ensuring everything fitted into the vision of production designer Joel Collins.

“Joel was keen to make it look like the 1950s, but because we’re not in our world, we’re freer than that, we would incorporate an older 1920s look, or something that looks slightly more Victorian,” Randall explains. “The graphics look like period wartime but we also didn’t want to be rigid and stick to that, because we don’t need to.”

Her main tasks included creating the alethiometer symbols, road signage and the Jordan College crest, as well as the logo for the Magisterium, which is the name given to the church in the series. “Mrs Coulter has quite a lot of paperwork, which is quite key at one point,” Randall continues. “Lyra’s bedroom also has lots of artwork, pictures and texts. There are lots of maps as well.”

For the alethiometer symbols, Randall sought a fresh layout that leaned away from its design on the book cover or in the 2007 film The Golden Compass, which was based on Pullman’s Northern Lights (known as The Golden Compass in the US) – the first book in the trilogy that forms the basis for the first season of this TV series, which is distributed by BBC Studios.

“We couldn’t just reuse the old designs – we needed something fresh,” she says. “They’re such tiny, tiny things but we see them quite a lot and they’re in the title sequence now! Each one was drawn about 50 times and then we had to work with our fabrication team to get those symbols to work at such a tiny size on the alethiometer itself.

“It’s basically a process of research, finding references and then putting forward your design. Then eventually you’ll come out with something that everyone’s happy with.”

Similarly, creating the Magisterium logo took several weeks. “I did like 50 or 60 of them. There were so many variations,” Randall says. “Now, that shape of the Magisterium badge appears in a lot of the architecture.”

The show also has its own alphabet, while older street signs use Roman numerals. “We wanted to give the impression it’s another world – Lyra’s world – so we completely changed the way that text looked, which was great and then became a real pain in the arse,” Randall jokes. “It means you can’t use anything real. You have to just make your own of everything – with newspapers and texts, it was Lyra’s-world text. That’s quite a big deal.”

Once a design has been finished and approved, it would be passed to Barry Jones, the head of props fabrication, whose team would build the item on site at Wolf Studios, in Cardiff, Wales.

“It’s really personable – we all work as a team and I can walk down there and have a chat with Barry about how he’s going to do a finish on something,” Randall says. “There are so many different things that we made in season one. We also designed our own computer font for Lyra’s world too and it ended up being used for everything, from the clapper boards to the readthrough scripts.”

Randall came on board the series at the same time as other art directors, by which time the scripts were in good shape and concept art had been commissioned and completed.

The challenge in her role, and for everyone in a creative position, is designing something that’s new, that fits and doesn’t look out of place, she explains. “But the challenge is a fun one. It’s what keeps you going, which I quite like. It’s problem solving.”

Chief among the problems she faced was that of the Magisterium logo, which had to avoid echoes of any other religious emblem, and many others too. “Everything you put down just looks like something else because every single symbol that’s easy to draw and easy to replicate has already been done,” she explains.

“It also needed to look of an age and not be brand-new looking, and not standout but be powerful at the same time, so it’s a really difficult thing to get right. That was something that took a long time, to the point where I was just wanting to see the back of it. Now we’ve seen it on things, on airships and great big buildings, I really like it.”

Randall is now back at work on season two, which was commissioned before season one had finished filming at Wolf Studios earlier this summer. As Pullman’s novels take Lyra on a mission across the cosmos, the story is set to offer Randall new creative challenges that are out of this world.