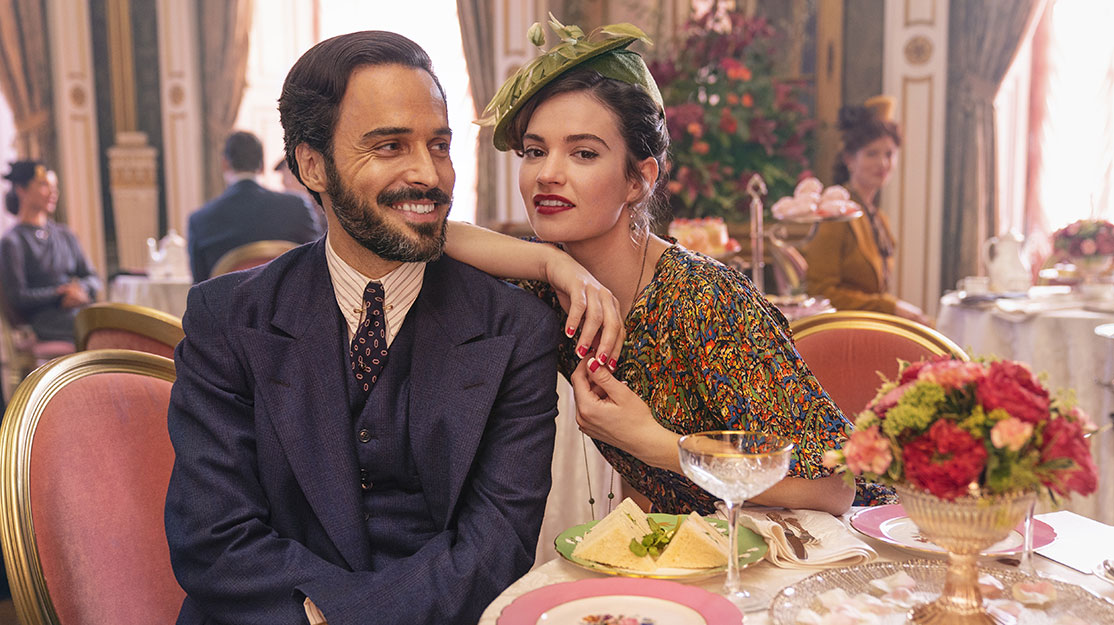 Sinéad Kidao, the costume designer on The Pursuit of Love, reveals how she worked with writer and director Emily Mortimer to create the interwar style of this comedic drama based on Nancy Mitford’s novel.

With the show’s story set between the two World Wars, the design team behind BBC and Amazon Studios drama The Pursuit of Love were tasked with recreating the wealth and opulence of British aristocracy at the time.

In particular, it was costume designer Sinéad Kidao who faced the challenge of dressing the eclectic ensemble of often eccentric characters that feature in the three-part series, which was written and directed by Emily Mortimer.

Based on the novel by Nancy Mitford, the romantic comedy drama stars Lily James (Cinderella) as the charismatic and fearless Linda Radlett and Emily Beecham (Little Joe) as her best friend and cousin Fanny Logan. Consumed by a desire for love and marriage, the two women are on the hunt for an ideal husband, but their friendship is put to the test when they choose very different paths. While Fanny settles for a steady life, Linda decides to follow her heart, leading her to increasingly wild and outrageous places.

Produced by Open Book Productions and Moonage Pictures, the series debuted earlier this year on BBC1 in the UK and is a coproduction with Amazon Studios in the US, Canada, Australia and New Zealand. BBC Studios is the distributor.

Here, Kidao (Black Mirror, This Way Up), who is represented by Casarotto Ramsay & Associates, tells DQ about working with Mortimer behind the scenes and working through the early stages of the Covid-19 pandemic.

How did you join The Pursuit of Love – were you familiar with the novel?
I had read the novel years ago and loved it, and I jumped at the chance to go and meet Emily Mortimer to discuss how it could look.

Do you approach each new project in a particular way? What immediate thoughts did you have for this one?
I approach every project, first and foremost, by breaking down the script, reading the original novel if there is one and then getting stuck into the research, looking at paintings, photographs and people from the original time. For this project, we took the lead on tone and comedy from Nancy’s original text and from Emily’s script. Their descriptions, not just of what people were wearing but how they were wearing it, were essential. I started with the book and the script, and then started researching the Mitfords and British aristocratic high society at the time, looking for the most characterful individuals we could use as inspiration. Fortunately, the people our characters are based on were widely documented and photographed.

How would you describe the style of the show’s era, set between the two World Wars?
Our show is predominantly set from the late 1920s until the early 1940s. We wanted to couple the eccentric aristocratic British style that the Mitford family embodied with the high-fashion styles of the 1920s and 1930s. Nancy Mitford was part of the ‘Bright Young Thing’ set – a group of young people growing up between the wars. They were wealthy socialites and they could afford to wear what they wanted, however they wanted.

How did you decide to dress the central characters, Linda and Fanny? Do they each have a signature look?
In the beginning, we see Linda and Fanny aged 17 in the late 1920s. Linda and her siblings are wild and bored. They hunt and ride horses all day and are educated at home. So what they wear is a bit erratic and messy, a mix of hand-me-down tweeds, jodhpurs and riding boots. Fanny has been privately educated, so her style is more conventional for the period, but she is in awe of Linda and completely influenced by her.
As they grow up and go in different directions, Linda’s style regularly changes. We felt that Linda was always ‘dressing the part,’ particularly in her adult years, from the glamorous socialite in the early 1930s, to life as a communist and then as a mistress in Paris. Fanny, on the other hand, always felt a bit ‘provincial’ next to Linda in her tweeds or knitted maternity outfit that she would pull out again and again every time she had another child!

Which other characters stood out for you?
The character of Lord Merlin was originally based on a wealthy aesthete called Lord Berners and, for our version, we were also heavily influenced by the style of [photographer] Cecil Beaton. Both individuals were such eccentrics in real life in how they lived and dressed that it felt like we had complete licence to go as big as we wanted with Andrew Scott, but I always wanted to have a reference or a photograph to back up what we were doing. We took pieces that existed during the period, and fancy-dress items, and just used them in his everyday wardrobe.

What were the challenges you faced on the show and how did you overcome them?
We had to shut down about three weeks before we were due to film because of the pandemic, and then we were one of the first productions to get going again last June. I did think at first, with all the fabric shops still closed and restrictions still in place, that we might not be able to pull it off, but actually we just got on with it and it was fine, and we were all very grateful to be able to work.
We had to buy mostly online rather than in person, so there were a few disasters where I got the scale completely wrong, the colours looked completely different in real life or it seemed impossible to find the right fabric or button or trim because everything was closed. But that’s all pretty trivial in the scheme of things, and part of the challenge on any project is working within limitations, whatever they may be.

You also worked on Bafta-winning anthology series Small Axe. What was your experience like working with writer and director Steve McQueen on the films Education and Red, White & Blue?
It was incredible to be able to work with Steve Mc Queen – he’s an artist and incredibly visual, so he picks up on every detail and is so specific.

How do you find working with writer-directors such as Steve McQueen and Emily Mortimer where one person has shaped the vision of a project?
The tone and intentions of a project are very clear from the beginning, so you really feel like all the creative departments are moving towards the same goal.

How has the role of costume designer changed since you started in the business?
I’m not sure how much has directly changed in the overall role in the 15 years since I’ve been working in theatre or film, as every job is so different as it is. The requirements on every project and the subject, budget, director, cast and team mean you need to be quite flexible and work in different ways each time.

What are you working on next?
I’m currently filming Life After Life, a four-part BBC series directed by John Crowley.