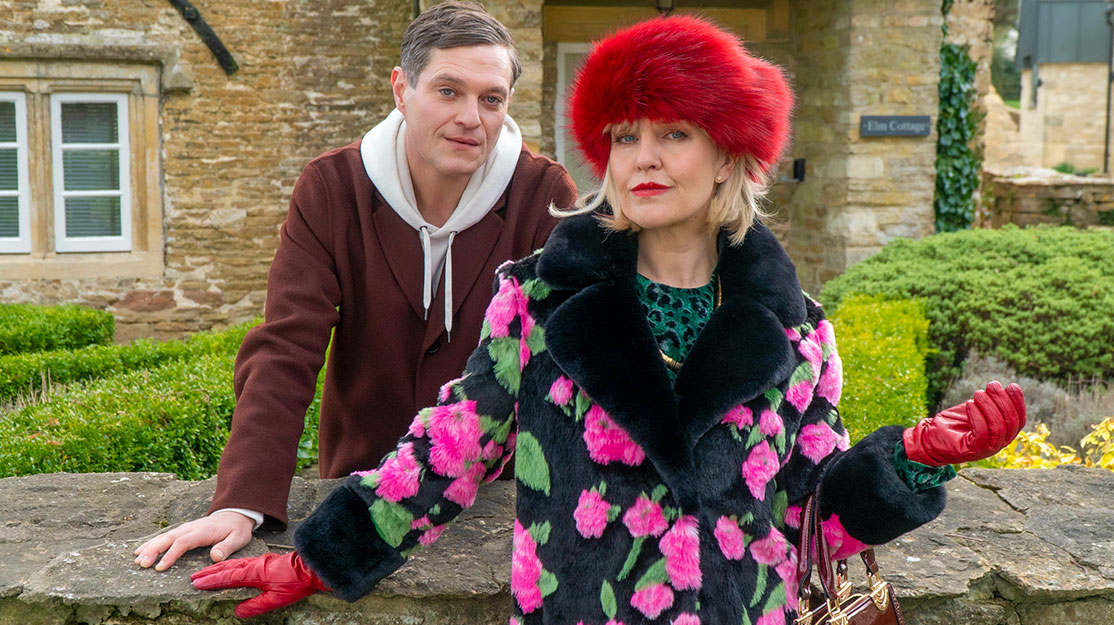 Iain Macaulay tells DQ about his work as costume designer on Agatha Raisin as the series, about the titular amateur sleuth, returns for a fourth season.

Based on the novels by MC Beaton, Agatha Raisin stars Ashley Jensen as the city PR who decides to retire to the country, only to become an amateur sleuth when she is confronted by a host of murders over the show’s first three seasons.

Following its debut in 2014 and a subsequent cancelled-then-resurrected saga, Agatha Raisin now returns to screens for a fourth season this month, beginning with festive episode Kissing Christmas Goodbye, which will air on Acorn TV on December 20 and Sky Max in the UK the following day. The story sees Agatha hoping to make it the best holiday yet with the reluctant help of trusty pal Roy (Matthew Horne). But any desire for a quiet Christmas quickly goes out the window when she is presented with a last-minute job when she receives a letter from the residence of Lower Tapor Manor. Seeking protection against some ghosts of Christmas past, Agatha’s clients end up presenting her with a murder investigation when her host is found dead.

Distributed by All3Media International, it is produced by [email protected] TV and Company Pictures. Three further feature-length adventures – Love, Lies & Liquor, Spoonful of Poison and There Goes the Bride – are due to debut next year.

Here, costume designer Iain Macaulay tells DQ why he joined the show for its fourth run and how he manages the demands of his role.

You’ve worked on a variety of shows, from Whitstable Pearl and Last Tango in Halifax to Hustle and Spooks. How do you see the role of costume designer in terms of the storytelling in a show?
I’ve always thought that costume design has a very important role in any show, not only for the actors but for the audience too. The main part of our job is to illustrate what is written in the script and bring it alive. Once I’ve had discussions with the directors, producers and actors, I can develop my own interpretation of how I think the characters should look. I then have to find costumes which satisfy everyone’s needs but mainly give the audience a clear idea of who the character is, including any quirks they may have or statements which can further illustrate clearly and quickly what they are all about

How did you join season four of Agatha Raisin?
I met with the producer at the time, Guy Hescott, who had been interested in my previous work and the following day he met with Ashley, who also suggested me as a possible costume designer for the show. I’d met Ashley some years ago in Glasgow on a social night out with some friends and she remembered me from back then, so it all seemed to work in my favour.

How do you approach a new project, and was Agatha Raisin any different?
When I read a script, I always get an idea in my head of what the characters will look like, but often those ideas have to be modified or in some cases changed completely as the actors who are cast simply wouldn’t look right for that particular concept. That is then coupled with any ideas the directors, producers and, of course, the actors themselves may have. With Agatha, it was slightly different because the show had already been established but it still meant I could bring my own interpretation to the characters.

What were your initial thoughts about the characters in the show – Agatha in particular – and how you might dress them?
It was obvious the show is very quirky and colourful, which was fantastic because it meant that I could expand it in that direction. With Agatha in particular, I always saw her as a bit of a Carrie Bradshaw [Sex & the City] type who has an eclectic style and that gave me scope to find some unusual outfits either online or in vintage or charity stores, which is something I love to do.

How informed have you been by previous seasons or did you want to introduce your own style to the show?
Again, with the previous seasons the characters had already been established but every designer has their own style, so I was able to bring in my own ideas and interpretation while still working within the parameters of the original concept.

Are all your costumes hand-made, bought in or a mixture?
The majority of the costumes are bought from many different and diverse sources and then paired together. Occasionally we do get things specially made if we have a specific idea and we can’t find what we’re looking for. It’s mainly time which limits us to being able to get things made, but if we know something is coming up or we have an idea then we can have the time to create bespoke costumes when necessary. We also tend to customise a lot of the clothes we buy, especially if they are from the high street shops, although we didn’t have too many regular brands on this particular series. Not for Agatha anyway.

How much of your work is completed during pre-production?
We usually manage to get around a quarter of the work done beforehand as it would be impossible to get it all done before we start filming. This is mainly due to casting and schedules, but once we actually start filming it somehow seems to get easier as we know where our deadlines are and what to prioritise. With films, you tend to have casting in place much earlier on and therefore more time to develop the characters and get things made.

Then once filming begins, what areas do you focus on?
Once we are up and running, I am generally working ahead to make sure we have everything we need for the following weeks and episodes, making sure every costume is complete and also fitting the visiting cast members.

What was your experience like working with Ashley Jensen, who plays Agatha?
Working with Ashley was absolutely amazing. We were always on the same wavelength about what we wanted to achieve with the costumes. Often one of us would suggest something which we would then try in the fitting and once the basic outfit was on, it quite often went off on a tangent with us both thinking exactly the same as to how we were going to complete it or make it better. We were like two naughty children left with the dressing-up box but the results were brilliant and we had a lot of fun along the way.

Are there any other characters this season we should watch out for?
There are many great characters coming up in this season, particularly in episode one with the battle-axe that is Phyllis Tamworthy [Maggie McCarthy], but Mrs Boggle [Marcia Warren] is an entity unto herself and a real favourite with everyone.

What challenges did you face on the series?
The main challenge for this season, and in fact also with Whitstable Pearl, was trying to shop during a lockdown. We had to do the bulk of our shopping online but you can’t always rely on things turning up in time for filming so there were a few incidences when we had to have a back-up plan. Infuriatingly, twice we had things turn up at lunchtime on the day we were shooting those particular scenes but it was too late. It did compromise us occasionally but we were able to solve it without too much hassle. For most of the characters it’s not so difficult to think of another idea but with Agatha’s costume being quite specific we did have to think on our feet.

How has the role of costume designer changed during your career? What new skills or expertise are called for in the industry?
I do think we are a lot more respected than we used to be but there is still a long way to go. I still have problems fighting for a full team as we are generally one member short, which then puts pressure on everyone, especially those on the floor. I reckon if the people who decide on the structure of our departments were to spend a day in the costume team they would quickly change their minds.

What are you working on next?
At the moment I’m having a break after working solidly for over a year but there are a few things in the pipeline, so I’m going to enjoy the rest while I can.