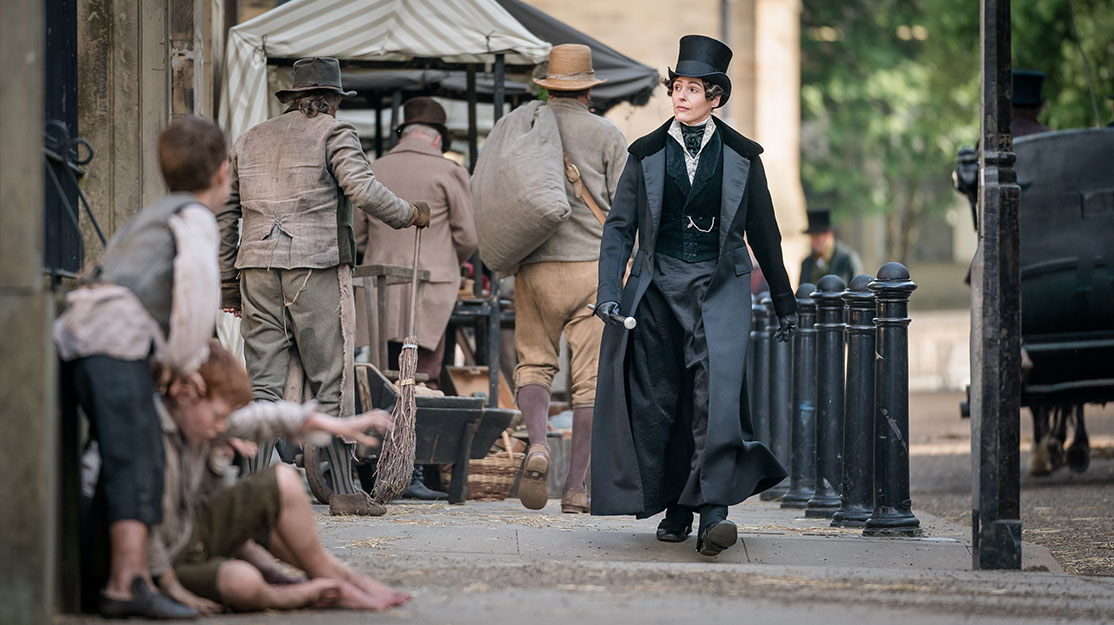 Sally Wainwright writes and directs Gentleman Jack, which sees Suranne Jones play Anne Lister, a landowner, industrialist, traveller and diarist who is often referred to as the ‘first modern lesbian.’ DQ visits the set of the BBC and HBO period drama.

The entrance to Shibden Hall is marked by imposing black iron gates and stone walls, with a large stone lion making its presence felt. The grand house, which dates back to 1420, is noticeable for its black and white Tudor frontage and large Gothic-style tower.

Generations of residents have seen the building and its grounds undergo an extensive transformation over the years, though its biggest evolution came during the ownership of its most famous resident. Anne Lister added the tower for use as a library where she could write, while also installing terraced gardens and a boating lake, with views from the grounds overlooking the stunning Shibden Valley scenery.

It’s here at the house near the English town of Halifax, West Yorkshire, where the majority of filming took place for an eight-part miniseries about the life of Lister – landowner, industrialist, traveller, diarist and the woman described as the first modern lesbian. The way she dressed and conducted herself saw her given the nickname – and the show’s title – Gentleman Jack.

The BBC1 and HBO series opens in 1832, when Lister (played by Suranne Jones) returns from Hastings to Shibden Hall after discovering that her would-be companion and lover, the aristocratic Vere Hobart (Jodhi May), has accepted a marriage proposal from a man.

Despite her affection for her elderly aunt (Gemma Jones), Anne is frustrated by the shabbiness of her ancestral home and finds her father (Timothy West) and long-suffering sister (Gemma Whelan) difficult to live with.

However, when Anne discovers that her land is rich in coal, her plans to transform the estate provide a welcome distraction from her broken heart. On the neighbouring estate, Crow Nest, shy heiress Ann Walker (Sophie Rundle) is quietly delighted to hear that the charismatic Lister is back.

On a bright but extremely blustery September day last year at Shibden Hall, filming is continuing inside the dark, constricted rooms, presenting a significant task for the lighting crew. Only the small bedrooms have been recreated in a studio, giving Gentleman Jack the remarkable authenticity of filming in Lister’s real-life home.

The historic house is usually open to members of the public, though filming between April and November has seen visitor numbers restricted. Each room has been dressed immaculately for the series, with the kitchen displaying a table laid with cutlery and glasses while pans and tankards hang above the open stove. A shotgun sits above the door.

The series comes from writer and lead director Sally Wainwright (Happy Valley, Last Tango in Halifax), who has long been fascinated by Lister. “What made me want to write about her primarily was just her character, just what an extraordinarily huge personality she was and the outrageous brilliant bold things she did,” she explains on set.

“I couldn’t imagine who could play Anne Lister because there are so many facets to her personality. She’s so extraordinary. She’s this mass of contradictions, she’s very bold and brilliant and she did so many fantastic, extraordinary things. It was hard to imagine anybody on the planet being able to embody all of that. I think the number of people who could play this part, there’s probably about one of them – we got her.”

The actor in question is Jones, who first teamed up with Wainwright on TV movie Dead Clever in 2007 before they were reunited on dramas Unforgiven and Scott & Bailey.

“I have a vague memory of [Wainwright] talking about this project because she’s written scripts before on this, but it wasn’t this,” says Jones, wearing a dressing gown in between takes but still sporting Lister’s unique hairstyle. She was asked to audition for the role and read the scripts, and admits she was intrigued to work with Wainwright the director, having previously only worked with her as a writer.

“The work started when I got the call to say yes. A year ago, I then said give me everything. So I got five books sent through, I got a dissertation sent through, some of Sally’s notes sent through. Then we came here and walked all the way round Shibden and stomped over to the coal mines. We even fed some pigs on the way.”

Rehearsals started just before Christmas 2017, with Wainwright keen to afford Jones time to allow her performance to “germinate” as the actor tried to soak up the Bafta-winning writer’s years of research into Lister’s life. “It was very thorough and it was really brilliant. We got the right person,” Wainwright notes.

The production also employed an “intimacy director,” Ita O’Brien, to ensure the actors felt comfortable during the sex scenes between Lister and Walker. Jones would run through scenes in full costume so she could practice carrying herself as the top hat-wearing Lister before the cameras started rolling. “If I hadn’t had all of that, I don’t think I’d have been able to do the part,” the actor says.

Jones says playing Lister has been the most demanding role of her career, becoming totally invested in playing the character through painstaking research and preparation with Wainwright. In fact, her work on BBC drama Doctor Foster, in which Jones played the central character, proved to be valuable preparation for Gentleman Jack, as she was already used to working through every beat of a series. “So when I got to this, it wasn’t a shock because I’m in a lot of it,” she says. “If I hadn’t done Doctor Foster, this might have been a shock in a way – going, ‘Oh, is it me again?’ So I was prepared for it.

“There’s so much to love [about Lister]. She is noble, unlikeable, flawed, beautiful, true to herself, and harsh to herself and to others. She’s a perfectionist, she’s a self-educator, she is an amazing lover. There’s a joyfulness about her love of women, yet there’s such a sadness when her heart’s broken – and it gets broken a lot. She is a carer, she is funny, and a bit mean. And she’s very blokeish but very sensitive. I mean, what isn’t she? She is everything. And getting to play all those things yet finding a constant was the difficult thing.”

Wainwright describes Lister as “a mass of contradictions,” which made the character incredibly hard to realise on screen. “As soon as you think of one thing to say about her, you can think of several things that contradict,” she says. “Hopefully that’s part of the excitement of the drama – that there’s a lot of conflict within her – and I hope the kind of choices we made give it an edginess.”

Central to the scriptwriting process has been Wainwright’s use of the extensive diaries Lister wrote throughout her life. Between 1806 and 1840, she filled 7,500-plus pages with around five million words, as well as writing hundreds of letters, account books and other papers that offer a fascinating insight into her life and the 19th century experience in general. But what makes the diaries unique is that her more personal thoughts – ranging from her relationships with other women and financial information to scathing comments about other residents in Halifax – were all written in code, a mixture of symbols, numbers and Greek letters that Lister appeared to switch into effortlessly.

For the series, Wainwright and advisor Anne Choma, who has written a book about Lister, translated 340,000 coded words for the first time.

“Sections of the diary have been transcribed before but never all of it,” explains Faith Penhale, executive producer on Gentlemen Jack and CEO of producer Lookout Point. “The section we were looking at, we knew elements but we didn’t know the whole thing. One of the joys that Sally’s found with this is every time you transcribe a new section of the diaries, something new arises that you didn’t know, so it does feel like we’re uncovering something. Anne Lister was a natural dramatist. She loved the drama of her own life.”

Choma consulted on the scripts from the beginning of development to help ensure Lister’s authentic voice could be heard through the series. “Sally would say Anne would write far more exciting things than she could ever dramatise,” she recalls. “We had two major themes, the affair with Ann Walker and the business rivalry with the Rawsons.

“Sally’s scripts are so strong. The big challenge was staying true to Anne Lister and making sure we were producing a portrait that Anne would recognise herself. Some bits are very difficult to get your head around, so some of the dialogue had to be adapted for modern audiences.”

Despite her extensive writing credits, Wainwright has only previously helmed episodes of crime series Happy Valley and single drama To Walk Invisible. Here, she directs the  series alongside Sarah Harding and Jennifer Perrott.

Wainwright says her approach behind the camera puts authenticity above everything else in an attempt to reflect the real Lister and the world around her. “We’re trying to make it for a modern audience as well, so people will sufficiently believe the authenticity and accuracy about the amount of research that’s gone in but equally find it entertaining as well,” she says. “It’s finding that balance. It’s finding a way of telling our story that creates a true semblance of going back into the past, but [in a way that] that will entertain people as well in the here and now and has a resonance now and has things to say, which it clearly does.”

The director went against standard period drama convention by making extensive use of a steadicam on set, enabling her to capture sweeping shots of the landscape around Shibden Hall while trying to keep up with Jones.

“It’s in the diaries that Anne worked out she walked at four miles an hour. I got the electric bike out and pushed it so I got up to four miles an hour just to see how fast it was, and I was thinking, ‘That’s fucking fast.’ But I think Suranne walks faster than four miles.”

But it’s those moments at Shibden and in the surrounding countryside where Jones says she truly valued being part of the production. “Every day, even when it’s tough and there are long hours and I can’t remember my lines or whatever, you have to take a step back and breathe and go, I can’t actually believe they let us in this house because it’s her house.”

Though ostensibly a period drama, the series is thrilling from the outset, and while there are elements of it being a domestic drama, it is never dull. Lister, as played by Jones, is a whirlwind of energy, charging around the countryside, driving horse-drawn carriages or climbing walls. Most notable is the fact that the character often breaks the fourth wall to look directly into the camera, while Lister’s inner thoughts are sometimes narrated.

“I always aim to entertain, that’s my big thing,” Wainwright adds. “I always want to make people laugh. It’s got to be true and there’s got to be drama but I do find Anne Lister very funny. I think she was funny. That’s one of the things I’ve tried to do.”