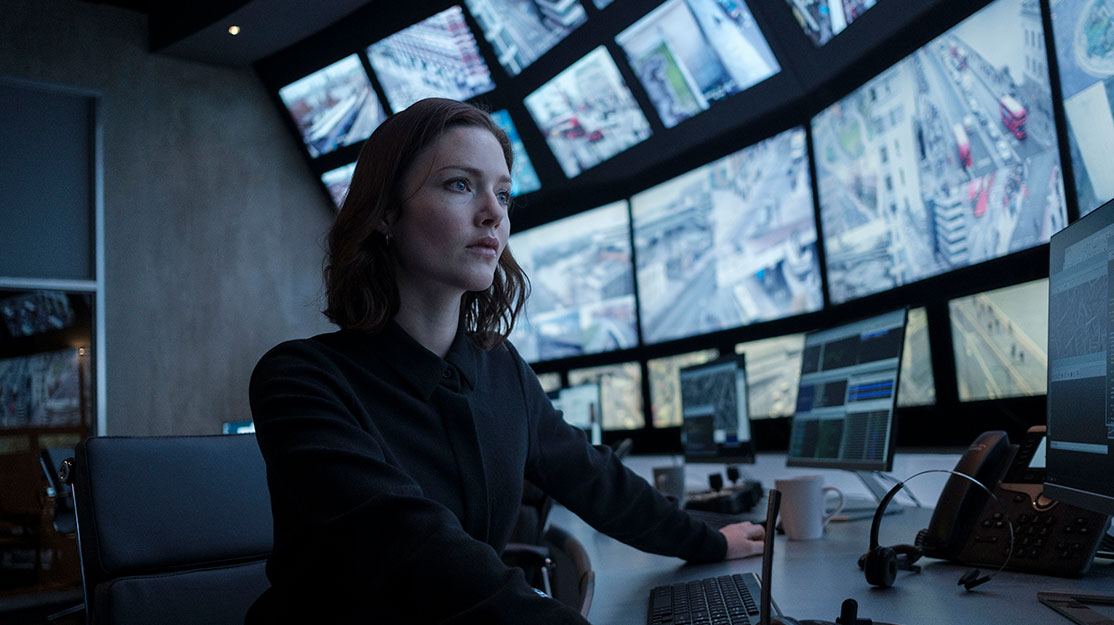 BBC drama The Capture imagines a ‘post truth’ world where a soldier must fight for his freedom in the face of apparently damning CCTV footage. DQ visits the set and speaks to writer/director Ben Chanan.

In the brick-walled basement of a Central London property, computer screens flicker in unison. Dozens of CCTV monitors are relaying images from all parts of the city, while laptop and computer screens atop industrial-style metal desks variously display more camera footage, detailed maps or pages of complicated coding.

Nearby, a row of interview rooms are covered in soundproof cladding, with low lighting adding to the veiled atmosphere.

This is a safe house belonging to a CIA ‘dark ops’ unit, with US intelligence officials operating covertly on the streets of Britain. In the main surveillance room, Hollywood actors Famke Janssen (X-Men) as Jessica Mallory and Ron Perlman (Hellboy) as Frank Napier can be seen in an upstairs office, rehearsing an upcoming scene in front of yet more screens and computer cabinets filled with wires and flashing lights.

The setting, constructed inside a studio in West London, teases many of the themes and ideas behind The Capture, a six-part BBC1 drama described as a surveillance conspiracy thriller that examines ‘fake news’ in a world where the power and influence of the security services touches every aspect of modern life.

The show sees Callum Turner (War & Peace) play soldier Shaun Emery, whose conviction for a murder in Afghanistan is overturned because of flawed video evidence. Returning to life as a free man with his young daughter, he must soon fight for his freedom once again when damning CCTV footage surfaces after a night out in London.

With DI Rachel Carey (Holliday Grainger, pictured top) brought in to investigate Shaun’s case, she quickly learns that the truth can sometimes be a matter of perspective.

“We’re all a bit fascinated by this surveillance world we live in and feeling a little uneasy about how it impacts our lives,” explains executive producer Rosie Alison. “This is a show about how you interpret what you see. It’s very much about the world of fake news, post-truth and people having different perspectives on what truth is.”

“We’ve been really influenced by what’s going on in the world around us, particularly in the last two years, and this show is a response to that,” adds producer Derek Ritchie. “The public are asking questions, so we wanted to ask questions as well. We want to encourage that debate about how we think about surveillance and digital technology and how it changes us and our perspectives of ourselves.”

In a competitive situation, series coproducers Heyday Television (The Long Song) and NBCUniversal International Studios (Hannah) snapped up the The Capture when it was being shopped around, having previously explored the idea of a surveillance thriller but having come up short when it came to finding an original idea or a book on the subject that could be adapted for television. Writer/director Ben Chanan’s pilot script, however, fitted the bill.

“In came this script and I couldn’t believe my luck. Ben had been sitting on his own, coming up with a brilliantly worked-out conspiracy thriller. I rang the agent and got Ben in and love-bombed him with passion,” Alison recalls. “We said Heyday was interested in this area and it was clear he had done something brilliant, so we’ve been enablers and caretakers of Ben’s brilliance. I was very passionate from the start.”

Tom Winchester, president of Heyday Television, picks up: “I remember thinking at the time there was a slightly fantastical element to it because it felt a little bit like one step into the future. Two years later, it just feels this is the world we inhabit and it feels incredibly current. It’s one thing writing about what’s happening now but what Ben’s done is write about what could be happening in two years’ time. That’s the magic of The Capture.”

On screen, Grainger’s DI Carey proves to be the audience’s entry point to the story as she works her way through a moral maze to discover if Shaun is guilty or innocent. But it is Shaun viewers will relate to as the everyman caught up in circumstances that run wildly beyond his control.

Fellow executive producer Tom Coan likens Shaun to Harrison Ford’s character Richard Kimble in 1993 thriller The Fugitive. “He’s that guy who could be any of us and is relatable and accessible,” he explains. “He’s not a superhero or outside the realm of everyday life. That makes it more compelling, but scarier. It could be any one of us who finds ourselves in this position.”

Filming took in a range of locations in London across 81 shooting days that ran from October last year to April. With the producers seeking a gritty-looking London over a stylised, fake or glossy appearance to ensure the series remained rooted in authenticity, sites included housing estates, prisons and playgrounds. A counterterrorism advisor was on hand during production, while Military specialists Bare Arms also provided support. In addition, the cast all spent time with police. Grainger shadowed a detective, while Turner undertook army training for his role.

“As a producer, London is pricing itself out of filming. It feels like it’s becoming prohibitively expensive,” Ritchie says. “It’s a shame because it’s an amazing place to film. As a city, it’s getting very pricey. But the personality of the city is key to the series. London’s rich pageantry is there in The Capture.”

Back in the CIA bunker, CCTV footage continues to roll across the room’s copious screens. But rather than use incidental stock footage, every frame has been specially filmed for the series by Mark Doman (Spooks), who spent six months creating the surveillance world around the drama.

Ritchie says Doman’s expertise lies in framing, crafting CCTV that doesn’t capture anonymous people or the show’s protagonists in the centre of the camera but often in random positions, replicating the nature of real surveillance footage.

“There are key moments that are caught on CCTV and Mark is with us filming all of that, so he works with the main units and independently of it,” he says. “When we cut to one of those shots or see it in the background, the feeling of verisimilitude you get from it has got to be perfect. That comes down to Mark’s work on the texture and feel of the images, how they feel different from the conventional drama around them. It’s been a vital creative part of the puzzle.”

While water-cooler television might largely be a thing of the past, last year’s pulsating thriller Bodyguard (another BBC series) proved drama still has the power to bring viewers together. That’s certainly what the team behind The Capture hope will happen as they open up the debate about surveillance culture.

“In this post-truth world, where we’re being constantly bombarded by information, you have sensory overload – but the one thing we feel we can believe in is what we see. That’s the last bastion,” Winchester argues. “It’s just throwing that up for conversation. How much of what you see can you trust? For me, that’s fascinating.”

Ritchie adds that the denouement to the series, which is distributed by NBCUniversal International Distribution, is by no means clear-cut. “We want the audience to have different opinions. At the end, there’s a moral question posed and I would love it if the audience has different views on that. Everyone has a multitude of motivations and self-doubt. We’re trying to open it up for debate.”

With The Capture promising a great deal of twists and turns, viewers will do well to question whether they can believe what they see as this modern thriller unfolds.

Must watch
By Karolina Kaminska

In a world where video manipulation is becoming sleeker and fake news more prevalent, the themes of The Capture are increasingly relevant . But writer and director Ben Chanan hadn’t realised when he formulated the idea for the series that it would turn out to be so topical.

“The origins of the story go all the way back to my time in documentaries,” says Chanan, who won a Bafta in 2013 for The Plot to Bring Down Britain’s Planes. “I made a couple that involved quite a lot of CCTV footage and video evidence. I made a doc where I was filming the Metropolitan Police; I made another doc where I was filming with some counterterrorist operatives in London and Washington and I became aware of just how integral video evidence was to our justice system.

“At the same time, I was increasingly aware, through working in TV, that video manipulation was becoming better, cheaper, easier and faster, and I started to think surely those two developments would one day collide and that would be a really interesting world for a drama to be set in.

“So that’s where it started to percolate years ago. It just took me this long, probably nine years, to actually turn that thought into a narrative and get it made.”

During those years, the concept of fake news began to enter public consciousness, but Chanan says he came up with the idea for the series much earlier.

“The funny thing about fake news in terms of how it relates to this idea is that I hadn’t really heard the term, or at least not in the way we use it now.

“When I started developing the idea – in fact, when I started writing it – suddenly Trump was elected and fake news was a big thing. It’s weirdly timely in that it certainly wasn’t designed to coincide with it; I certainly didn’t hear all the talk about fake news and then get the idea. I guess it’s a lucky coincidence.”

In light of the show’s themes, Chanan says the aim of the series is to raise the issue of what might happen if people no longer trust video evidence.

Given the relevance of the show’s themes in today’s society, will The Capture return for a second season? “I have no idea,” says Chanan. “I have to finish this one first and then take a break and see how we all feel about it.

“It certainly is a contained story. We don’t leave the story of what’s happening to Sean and why it happens and where he gets to unresolved.”