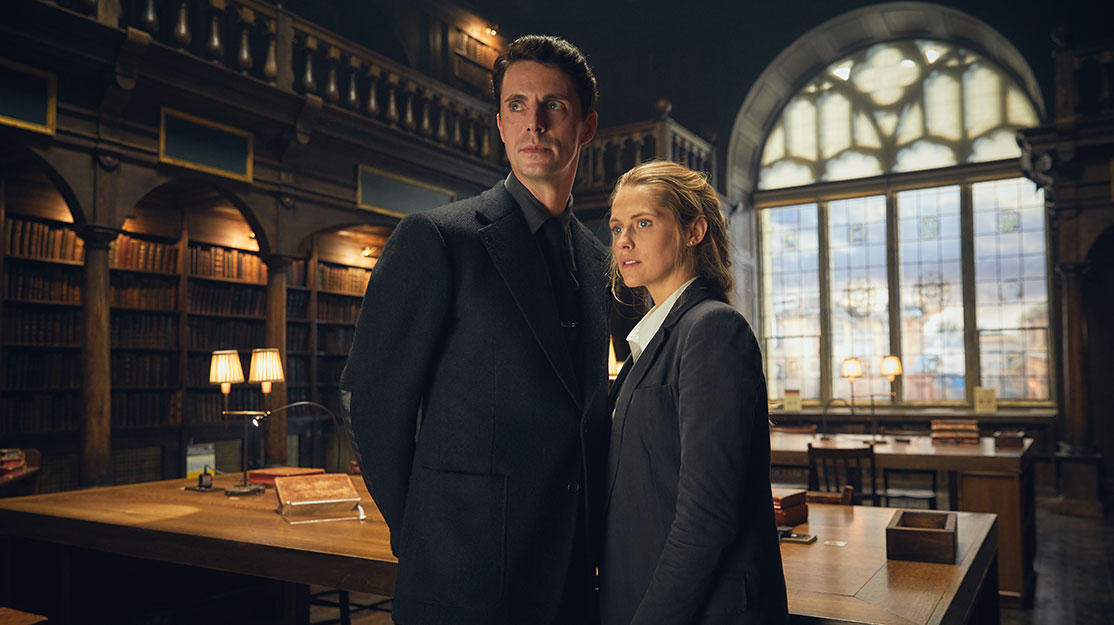 Inside the Wolf’s lair

With shooting underway on BBC1’s epic adaptation of Philip Pullman’s hugely popular His Dark Materials trilogy, the author recently came to look around Wolf Studios Wales, the immense new filming facility that has been built in a former Nippon Glass factory in Cardiff Bay.

Pullman, an Oxford alumnus who still lives in the area, was particularly eager to see the studio’s recreation of the university’s Bodleian Library. This exquisite medieval interior features both in his work and in A Discovery of Witches (pictured above), Deborah Harkness’ bestselling novel, the forthcoming adaptation which was also filmed at Wolf Studios.

Pullman was not disappointed. Jane Tranter, the CEO of Bad Wolf, the production company responsible for the TV versions of both His Dark Materials and A Discovery of Witches, recalls the author’s reaction to the impeccably detailed set: “He simply said, ‘OK, that’s the Bodleian Library. It’s perfect.’”

Production designer James North, who has also been called upon to recreate upstate New York, Venice, Finland and France for A Discovery of Witches, lets the light in on the magic of filmmaking: “We’re supposed to be in some of the most beautiful places in the world, but we’re actually shooting them in a former factory in Cardiff!”

Of course, such effective trickery requires an extraordinary attention to detail. As an example, North outlines the meticulous work that has gone into the impeccable reconstruction of the Bodleian.

“It’s virtually impossible to film in the real Bodleian,” he says. “They were brilliant and really helpful, but it’s a working library and the scholars must come first. Also, in the Bodleian, you’re not allowed to touch the books or light fires or throw people around – all of which we needed to do! So instead we recreated one of the reading rooms, Duke Humfrey’s Library, here.”

North, who has also worked on Doctor Who, Line of Duty, Da Vinci’s Demons, United and Outcasts, admits that recreating the Bodleian at Wolf Studios “was a big old build. It took eight weeks to construct.”

And the hardest part? “Building 600 metres of book spines. We took 150 metres of real book spines and moulded them to make fake versions from spray foam. We individually painted each spine.” The sacrifices people make for their art…

But such painstaking work coheres with the high standards that are being set at Wolf Studios. Conceived by Tranter, who was previously head of fiction at the BBC, and her former BBC colleague and partner in Bad Wolf, Julie Gardner, it is the biggest film and TV studio in Wales.

It contains seven studios and covers an area of 250,000 square feet. Its biggest soundstage, Studio 6, has a height of 17.5 metres, making it the tallest in Wales and rivalling the size of the 007 stage at Pinewood.

Wolf Studios is a major financial undertaking. The site was acquired by the Welsh government for a reported £7m (US$9.3m) and leased to Bad Wolf for an initial 10-year term. But there should be very healthy returns: over the coming years, Wolf Studios is projected to deliver a £120m boost to the film and TV industry in Wales.

A Discovery of Witches alone, which is being made for Sky and NOW TV and debuts on September 14, has a reported budget of £25m. Rumoured future productions include an adaptation of Bernard Cornwell’s Warlord Chronicles, and Harrow Alley, a drama set during the 17th century plague and starring Dame Emma Thompson.

Even though A Discovery of Witches, a supernatural drama about a witch and a vampire who team up to battle dark forces, is the first production to be shot there, Wolf Studios is already creating a buzz throughout Wales.

A graduate of the Royal Welsh College of Music & Drama, North explains: “We are very blessed at Wolf Studios. There was a big cost involved, but it’s worth doing properly. We have an awful lot of studio space here. Having these facilities outside the south-east of England is massive.

“Also, the construction has been exceptional. We have the same standard of soundproofing as they have in cinemas. There is a workshop in the corridor outside the studio. They can have 20 builders working there with saws and hammers and, at the same time, through just one door, we can be filming a beautiful, quiet two-hander love story without hearing any of their work.”

North continues: “The best thing about Wolf Studios is that it’s been built by Jane and Julie, TV production practitioners. It’s not been developed by property developers simply to make money. It’s designed to be practical. It feels like the sort of space where you can make amazing TV. It’s not just about rocking up and filming in a shed, which people have had to do a lot in this industry.”

It is true that Tranter and Gardner are very much hands-on producers with the expertise to tailor-make a user-friendly studio. Tranter sits down with DQ in the immaculate upstate New York drawing room that North and his team have constructed for A Discovery of Witches on a soundstage at Wolf Studios.

The lively, highly intelligent executive, who has had enormously positive experiences of working in Wales on dramas such as Doctor Who, Torchwood and Da Vinci’s Demons, reveals that it was making the multi-Emmy-winning thriller The Night Of on New York soundstages that first gave her the idea for Wolf Studios.

“During that time, I learned to love filming in a studio,” she says. “British TV drama has traditionally not been so studio-based. We love our locations, partly because in the past they’ve been cheaper, but mainly because we love our social realism.”

But, Tranter adds, “working on The Night Of really made me think about what a studio could offer. I liked the fact that it was a very big employer in the city. Generations of people in New York worked in the same studios.

“It also made me think of our experiences filming in studios in Wales on Doctor Who, Torchwood and Da Vinci’s Demons, and I realised that New York crews are like Welsh crews. They both have a passion, a commitment and a conviction that carries them through. So I thought, ‘If New York has that, I don’t see why Wales can’t have it too.’”

Tranter proceeds to explain how they found this particular site in Cardiff Bay. “Because we were making His Dark Materials, we knew the studio had to be on a very large scale. But it took us 12 to 18 months to find this location. At first, we looked at various others. But when we found this one, we knew it was right immediately.

“I thought it was really appropriate that we were building a studio in a factory that was closing down. That is so much part of the contemporary story in so many places in the UK. It seemed that if one door was closing, maybe another could open. So we were very privileged to take this place.”

One aspect of Wolf Studios that Tranter insisted on was an education department. “We built a classroom because I felt we needed to create a place where employment can happen,” she reveals. “The sooner we start telling people there are lots of jobs in this industry, the better.

“People can work in front of or behind the camera as writers, directors, producers, drivers, cooks, accountants, electricians, carpenters, hairdressers, costume-makers and make-up artists. Drama production is a big, industrialised business.”

So, the executive continues, “I said, ‘Send us children from nine years old, because within 10 years they can be working here.’ We’ve already had hundreds of all ages through the door. We’ve also had lots of trainees – we have had 41 on A Discovery of Witches. If we keep doing it and repeating it, think how many people we will train for this industry.”

The executive, who co-founded Bad Wolf with Gardner in 2015, was also anxious to make people aware that Wolf Studios would be a year-round operation. “I felt very strongly that we should have a studio that is open 52 weeks of the year,” she says. “When a production comes to town, it fills the hotels, B&Bs, shops, pubs, bars and dry cleaners. But then the production leaves and you have tumbleweed and empty crisp packets blowing down the street – the circus has left town. In this case, the circus won’t leave. It becomes a place of employment.”

Looking back on the events of the past year, Tranter expresses satisfaction. “We christened the studios with A Discovery of Witches and it confirmed that, as a couple of crazy producers, Julie and I were right to open Wolf Studios. You could say that it was an act of insanity, but creating this arena that allows for maximum creativity has been one of the proudest experiences of our lives.”

“But one day I’ll drive away and everyone will just keep going.”