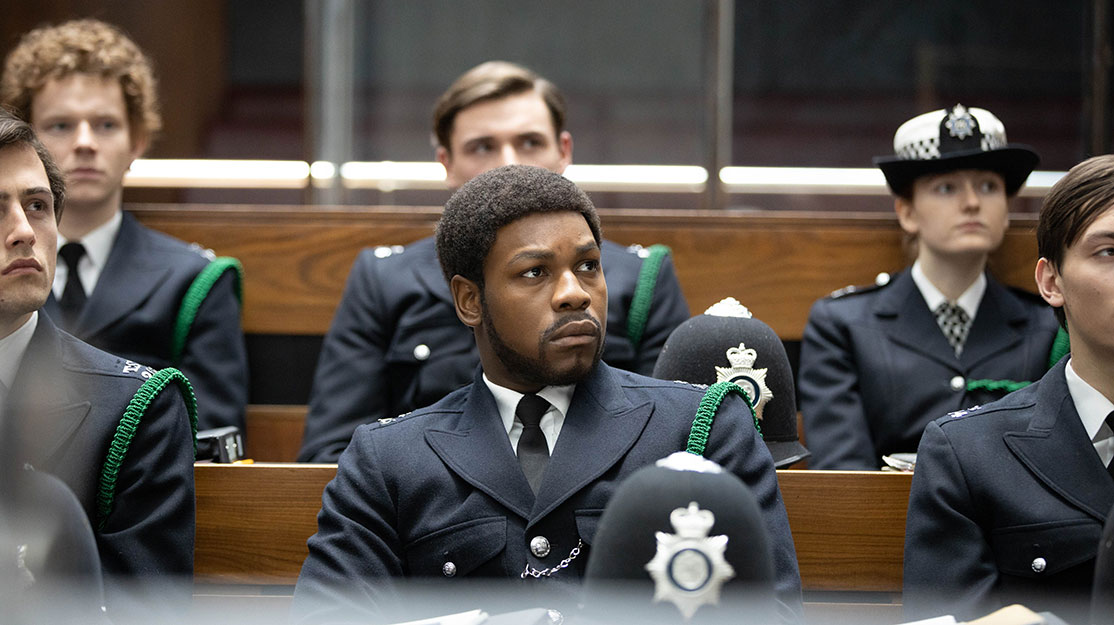 Star Wars actor John Boyega discusses taking the lead in Red, White & Blue, the third film in Steve McQueen’s Small Axe anthology, which tells the true story of a young black man who joins the police to combat racist attitudes from within.

The five separate films, set between the late 1960s and mid-1980s, tell stories about a group of people “whose lives have been shaped by their own force of will, despite rampant racism and discrimination,” according to the BBC, which began airing Small Axe in the UK on November 15. The series is also available on Amazon Prime Video in the US.

Another true story, it stars John Boyega (Star Wars) as Leroy Logan. In the early 1980s, Logan is working as a forensic scientist. But after his father is assaulted by two policemen, he finds himself driven to revisit his childhood dream of becoming a police officer, with the aim of changing racist attitudes from within – a seemingly impossible task in an institutionally racist Metropolitan Police.

All five Small Axe films were directed and co-written by McQueen, who penned Red, White & Blue alongside Courttia Newland. The series is produced by EMU Films, Turbine Studios, Amazon Studios and BBC Studios, with the latter distributing. The executive producers are McQueen, Tracey Scoffield and David Tanner.

Here, Boyega discusses working with McQueen, diversity in the UK screen industry and speaking to the real Leroy Logan ahead of playing him in Red, White & Blue.

Tell us a bit about your character and what Red, White & Blue is about.
It’s a film about Leroy Logan, a young black British man who is struggling with his decisions. He’s come to a point where he’s decided he no longer wants to be a scientist, and he wants to basically affect his community in a much more important way. He decides that he’s going to do that by joining the police force in the 1980s, which, in terms of race relations and police force relations with civilians, is a complicated time.
You basically follow him through this story of self-discovery in an environment that isn’t used to him, his kind or his culture. You see the way in which Leroy decides to navigate that and you also see the way it affects his family. It’s a story that essentially has a father-and-son relationship at the centre of it, during really troubling times in terms of race relations.

What did you know about Leroy Logan before taking the role?
I didn’t know much about him at all. But what’s funny is when I first met him and we started talking, I was actually with one of my friends who knew him. And she was like, ‘Oh yeah, I was part of one of the youth groups [run by Logan]’ – he works a lot with young people. But I didn’t know much about his intricate story, especially in the way this script explores it.

How did your conversations with Leroy shape the way you played him?
It was really about his decision making. You have to understand this is a black man who decides [to join the police even though] his community and his people don’t really support this institution – especially when his father goes through a personal experience in which he is assaulted by two police officers.
I wanted to understand the man behind that decision; the man who was strong enough to swallow the conflict and give us the representation of the police force needed. Those questions are based on me just being honest like, ‘Bro, if it was me, I probably wouldn’t handle it like this. Why did you make the decision you made?’ Understanding his intention really informed me in making sure the portrayal was accurate.

Tell us about your approach to playing real people.
This is the third time I’ve played somebody who’s real, after [2017 film] Detroit and [2014 Netflix original] Imperial Dreams. [For Leroy] I just watched him. I like to see the way people are. I look at the little things – how they walk, how they talk, how they blink. He’s truly a man’s man, whereas I’ve got more boyish energy. He’s ironing some trousers and he’s in a string vest with little dots on it. He’s just a straight-up Caribbean black man.

How did you and Steve McQueen approach the dynamic between Leroy and his father?
I had to speak to him about my father and our dynamic, and he spoke to me about his father and their dynamic. We were always either laughing about something that we went through, or it was a serious chat about a real fundamental moment. There was a lot of spontaneous conversation and creativity.

Were you a fan of McQueen’s previous work? What was it like working with him?
Yeah, I’m a big fan of Michael Fassbender as well, so I actually found out more about Steve through following Michael Fassbender’s career. Shame [McQueen’s 2011 film starring Fassbender] was one of my favourite movies.
I was taken aback by the way in which Steve shoots certain scenes. For example, in Red, White & Blue, there’s a scene where [Leroy and Greti] have just moved into a flat. It’s just really taking in this new space. Steve leaves the camera on top of the staircase in a corridor with the audio on and just allows us to move within the space and you don’t always see us.
I like the man, that’s the first fundamental. I like what he stands for and the way he thinks. I like how charming he is and I like that he’s in touch with his masculine and feminine. He’s a very balanced individual. So that really helped inspire a good collaboration that will obviously make me want to work with him several different times after this.

You bring focus to things that are going on, talking about Black Lives Matter and things that affect black people. Where does your sense of pride and fearlessness come from?
I think black individuals should all take a moment and just look at our mental health. Sometimes something is wrong and you don’t even know what it is. I bet you it has something to do with constantly having to morph and to navigate these complicated spaces. You’re doing that from Monday to Friday and it’s long. It eats at your creativity, makes you distrusting of people and affects your personal life and your work ethic.
For me, the issue really is I refuse to bend to a tune, to fit in. Not everybody gets the chance to think like that, so I understand my privilege, but it’s also my privilege to make sure I can be an example for those who are coming [into the industry] as well – [to show] you can actually live in your culture and your blackness, and that can be aligned with your artistic endeavours. That, for me, is the most important thing. I am who I am; it’s not a decision I have to make.

What do you see as the biggest area for improvement in the UK industry with regards to race and representation?
We need to start seeing representation in terms of producers and executives. We need more rights, more IP, from owners who are black. It’s very important to help influence change and collaboration.
Michaela Coel’s I May Destroy You is definitely one of those projects that is at the forefront of this kind of endeavour. Michaela has an ownership of [that show] that I find really inspiring. I was listening [to an interview with her] and she spoke about the importance of ownership, and that’s one thing that I want to see more of, because I’m also a producer and I get an insight behind the scenes.
We also need more perspectives in development, especially in terms of black women. These roles that are written and cast to represent you need to come from you.