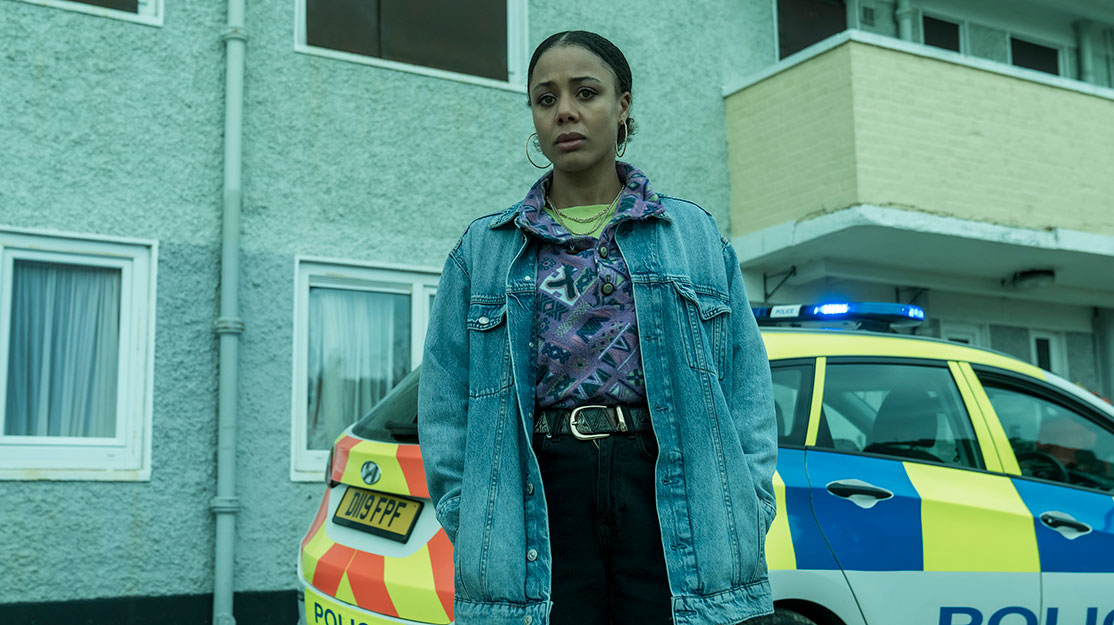 In the Witness box

Nina Toussaint-White opens up about about starring in Channel 5’s tense thriller Witness Number 3, her love of the theatre and the challenge of juggling life as an actor with being a new mum.

While her TV credits include The Sister, The Feed, Gameface and Bodyguard, there’s no doubt Nina Toussaint-White’s first love will always be the theatre.

At the end of a four-week rehearsal period for her upcoming West End show, Closer, “I’m loving it. I’m just having the best time,” she tells DQ. “I’ve been blessed with a bunch of great actors. They’re all really talented, there are no egos and you feel very held and supported by them.”

Toussaint-White’s love of acting came from being on stage in drama groups when she was younger, and she originally wanted to pursue a career treading the boards. But as she started to land roles on TV, she found more opportunities coming her way on screen.

“People go, ‘What kind of actor are you? Are you stage or TV or film?’ I say, ‘I’m an actor,’” she explains. “If you’ve done a lot of TV then you get pushed into it. That’s changing now, but I have in the past been at fault for going for the pound signs rather than the creative experience just because I needed to survive.”

At times in her career, Toussaint-White says she has found herself having to choose between joining a play or signing up for a TV show. “But financially I had to take the TV role,” she admits. “There isn’t always the most amount of money in theatre, but the creative process and the stuff that you learn from it, they are priceless. When I took this job [Closer], I said to myself, ‘If I’m not going to do this job, why am I an actor? If I don’t do this then I don’t know why I’m doing it.’ That’s why I’m doing it, and I’m so glad I did.”

In Closer, a 25th anniversary revival of Partick Marber’s play, Toussaint-White takes on the role made famous by Julia Roberts in a 2004 feature film adaptation. The story concerns two couples whose relationship becomes complicated when the man from one couple starts an affair with the woman from the other.

The play’s story about love, intimacy and betrayal marks a departure from Toussaint-White’s latest screen role, Channel 5 drama Witness Number 3, in which she stars as a woman who unwittingly becomes the target of a terrifying campaign of harassment.

Toussaint-White plays Jodie, a single mum who owns a hairdressing business close to the housing estate where she has lived all her life. One day, she sees two men walking past the window and soon finds herself as the key witness in a murder inquiry. As Jodie’s paranoia grows, a local gang mounts a terrifying threat against her and her young son Kyle.

“She is a normal girl from a normal world,” the actor says about her character. “She’s a single mum, she owns a salon, she’s invested in her community… and when she sees two men walking down the street, it’s nothing out of the ordinary. But a few days later, the police make an appeal for people to step forward, and we quickly realise that Jodie is the key witness in a murder investigation – the two guys that she saw being the murderer and his victim.

“This just transforms into a barrage of intimidation against her and her family to silence her. Over the four episodes, we look very closely into Jodie’s world and into her paranoia and the suffocation she feels as a key witness. We see her strength and determination in protecting not only her family but also her community, no matter the cost. She keeps getting knocked down and quite terrifying things happen to her family, but she keeps fighting, which I don’t know if I could do myself. It takes a very courageous and a strong person to do the things Jodie does. It’s an inspiring role to play and give to the audience.”

Toussaint-White auditioned for the role – her first lead in a TV series – very soon after giving birth, something she now concedes might not have been the best decision. “I had a lot of auditions, I was going up for a lot at the time. In hindsight, where my headspace was, I probably should have given myself a bit of a break,” she explains. “But because of lockdown, because of being pregnant and the restrictions, I did land a job but then I wasn’t able to get into the country – I hadn’t actually worked for two years. As soon as I had my baby, a week later I was auditioning. And the self-tape I did for Witness Number 3, I actually had her in my arms.”

Toussaint-White had been sent the first script, written by Thomas Eccleshare, and says that by the time the first ad break arrives, “you want to come back for more.” The series, which is produced by Story Films and distributed by All3Media International, quickly sets its premise into motion, as Jodie witnesses one man leading another away from her shop, before the next scene shows her giving a preliminary statement to police officers.

Almost immediately, the campaign against her begins, from text messages, memes and links sent to her phone to dozens of masked people standing ominously outside her salon. With Diarmuid Goggins directing, a voyeuristic perspective is added as viewers watch Jodie through a mobile phone used by one of the gang members to record her every move.

“Obviously it was a chance to play a lead and it got me gripped. So I thought I’d be stupid not to give it a go,” notes Toussaint-White, who, despite being number one on the call sheet, says she isn’t into the hierarchal nature of TV casts and instead values the experience of a cast and crew making a show together.

“I do think that can be forgotten by some people,” she continues. “I’ve also been in jobs where someone has taken the number one role, the lead role, and although they’re doing a fantastic job, you can see the pressure they feel to lead it. I didn’t go in with any of that because of my mindset is we’re a group, we’re colleagues, so we’re all there for each other.”

With her husband and a teething four-month-old baby in tow, filming on location in Dublin between October and December last year brought the actor unique challenges far beyond the emotional depths she had to reach on set as Jodie is enveloped by paranoia and desperation.

“My world was so chaotic that I didn’t have a chance to worry too much about the ins and outs of the job,” she says. “You just had to get it done. I had to get home. And they paused four times a day so I could go and pump [breast milk]. Every lunchtime I had to pump, and then I had to rush home and I was up [in the night] with my baby. So there was no time to over-analyse things. That was a bit of a blessing because I didn’t get into my head. My outside world made the job. It was hard. It feels like a dream now. It’s all very hazy, but it made the job easy to do.”

Working with Goggins was “just magnificent,” she says, praising the director for giving her room on set to find her way into Jodie’s character and the chance to take scenes in a number of different ways.

“Probably in the past on jobs, I have had this trait of learning my lines too quickly, getting stuck in the way I deliver my lines and not really listening,” Toussaint-White explains. “He broke that out of me. He kept giving me the opportunity to do different takes and he gave us the time and the space to play.

“He is very much an actor’s director in the sense that he worked with each of us differently. He could see what would encourage us and push us further and then give you a specific note rather than a general wash on the whole show. He is a dad himself to two young babies and I just felt incredibly supported by him. I just wish I got to go to the pub with him, but I never got to really hang out.”

Despite playing such an emotionally charged role and being on set every day, Toussaint-White says her biggest challenge actually came before she even took the job, as she was hit by a wave of anxiety and pressure from the changes in her personal life.

“The anxiety levels hit a new high that I’ve never experienced before, and I think that’s definitely from being a new mum and just what I was doing to her and my husband,” she says. “Acting can be very hard and very demanding, but nothing has ever compared to what it is to be a mum. I never had any idea how brutal it is, so I think I allowed that time [on set] to be off [from being a mum]. It was a gruelling shoot because I was in every day, but my challenges were more in my personal life. So I was able to kind of relax on the job, which was nice.

“In the past, I would have probably eaten myself alive just with thinking, ‘Oh gosh, I don’t know how to do that. Am I saying my line right? Do people like me?’ Social anxiety, imposter syndrome… all these things I have been at fault of feeling in the past. At that time, they disappeared because I had so much else going on. It’s like the stars aligned. It’s my first lead role and it was the perfect moment to do the job because I was relaxed at work.”

After filming wrapped on Witness Number 3, Toussaint-White started saying no to a lot of auditions and “just wanted to be mum.” She has completed another role on upcoming action film Khandahar, which stars Gerard Butler as an undercover CIA operative stuck in Afghanistan, but then turned down a number of projects until Closer came along.

“I was just like, if I’m an actor, why am I not going to take something like this on? And now I’ve pressed pause so I can focus on the job at hand,” she says of the play, which began previews last week. “I’ve realised now that I used to audition a lot, five auditions a week, which is a very privileged place to be, but I was stretched too thinly. I’ve realised I need to be more mindful picking and choosing and knowing what I’m actually capable of doing.

“I always feel very lucky that I get jobs. You always think you’re never going to work again. Now, when each job comes along, I have to monitor and assess what it would mean to myself, my husband and my baby, and then take it from there.”

With Witness Number 3 hitting screens tonight and continuing until Thursday, Toussaint-White instructs viewers to “get ready for an edge-of-your-seat, tense, voyeuristic and suffocating psychological thriller.” She adds: “You’re taken on the journey with Jodie and you’re going to invest in her story.”