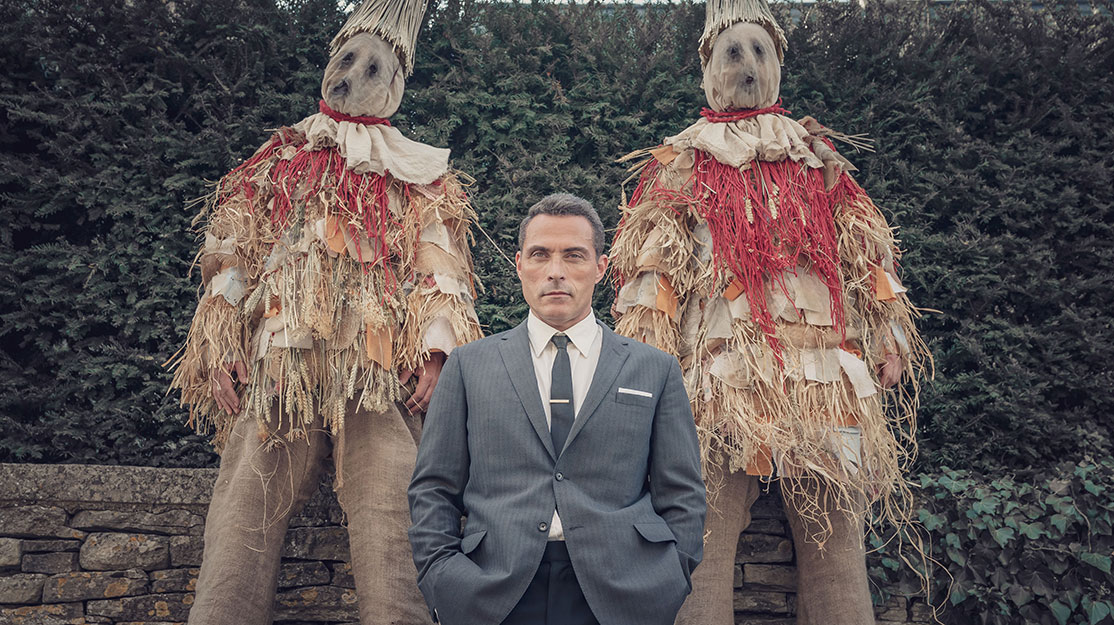 Director Leonora Lonsdale takes DQ behind the scenes of The Pale Horse, the fifth Agatha Christie adaptation from the BBC and writer Sarah Phelps.

The last time three witches caused such a fuss, a murderous Macbeth was acting on their prophecy that he would become king in Shakespeare’s tragedy.

But another trio close to the dark arts are now taking centre stage in The Pale Horse, an adaptation of Agatha Christie’s 1961 novel that marks the fifth collaboration between the BBC, producer Mammoth Screen (World on Fire), Agatha Christie Limited and writer Sarah Phelps (Dublin Murders).

The two-parter stars Rufus Sewell (The Man in the High Castle) as Mark Easterbrook, who attempts to uncover the mystery of why he features on a list of names found in a dead woman’s shoe. His investigation leads him to the peculiar village of Much Deeping, and The Pale Horse, the home of a trio of rumoured witches.

Word has it that the witches can do away with wealthy relatives by sinister means. But as the bodies mount up, Mark falls under the suspicions of Detective Inspector Lejeune (Sean Pertwee). Mark’s past then collides with the present as he discovers links to three witches – played by Sheila Atim, Kathy Kiera Clarke and Rita Tushingham – but are they as powerful as they seem?

On that question, director Leonora Lonsdale isn’t giving anything away. “They could be ordinary women or you could feel there’s a more sinister or a darker quality,” she says. “We always said that with this trio of women, you didn’t know if they lived together five years or 500 years. They could just be eccentric ladies living in a village or real witches whose power you don’t know if they use for good or evil.”

“I immediately felt like felt there was an interesting idea about beauty and horror, and how horror can sometimes be best hiding in plain sight,” Lonsdale says. “I was looking at these kind of very dark, psychological films of the 60s – Repulsion, Belle du Jour and Rosemary’s Baby – where you have all these beautiful actresses and beautiful apartments, but the secrets are kind of festering underneath.

“I really liked the idea in the script that you have Mark’s world, which is full of glamour, sexiness and fun, but underneath is this terrible past he hasn’t dealt with, and there are these witches in it. It seemed there was enormous scope to have fun visually.”

With a background in commercials and short films, Lonsdale’s work on The Pale Horse is her first for a TV show. She had originally met with Mammoth Screen about another project but was later called by her agent to say they wanted her to come back to discuss this Christie adaptation.

“I had 24 hours to read the script and do my pitch in front of [executive producers] Damien Timmer and Helen Ziegler, and Addo Yoshizaki Cassuto, the producer,” she recalls. “I didn’t sleep much but I prepared this big visual document. I really connected with the material, so luckily I didn’t think too much about it. I had interviews with Mammoth, the BBC and Agatha Christie Limited and it went from there.”

The director says she was encouraged to be quite bold with her visual style from the outset – notable in some of the stylistic depiction of 1960s London – with the belief that The Pale Horse was a different type of Christie story in the sense that it was among her later books and features magic, a characteristic that has also featured in novels such as Miss Marple story Nemesis, Endless Night and Murder is Easy.

“Certainly we weren’t afraid of this being a piece that could let go, be quite experimental and be quite dark,” Lonsdale says. “Sarah’s very clever because she’s probably as subversive as Christie was in her day. Christie herself delighted in exposing the kind of dark underbelly of these characters, exposing the polished veneer, in a way Sarah does so brilliantly.

“It was important to us that it’s set in 1961, so it’s on the brink of two decades. You have the war-torn London that’s still recovering from the 1950s and the Second World War, and the London on the brink of change. Those two different worlds we wanted to have embedded in the first episode, so you see Soho and you see these kind of shady revue bars, but then you’ve also got the poverty-stricken East End streets.”

Lonsdale also sought to immerse viewers in the story as much as possible. “We had the idea that the camera would be like death, so you build this sense of creeping dread and the camera sneaks up on them [the characters],” she says. “With Rufus’s character, we started with these fairly composed, quite choreographed settings. And then, as the story develops into episode two, we go into this slightly more free, mad journey or a kind of descent, where the camera becomes more handheld, [reflecting] his paranoia.”

Filming took place around the South West of England, particularly in Bristol and at the city’s Bottle Yard Studios. The village of Bisley, in Gloucestershire, was transformed into Much Deeping.

On set, Lonsdale maximised the limited amount of time available to rehearse. “Just being able to have a conversation about how we saw these characters, how we saw their worlds and what the dynamics were was invaluable,” she explains.

“In terms of how I like to work, it depends [on the] actor. Rufus is a very instinctive actor. Usually, he and I would have a conversation and, most of the time, we would be very much on the same page. I trusted him, so a lot of it was just about giving him space. I would let the cameras roll in between takes and he would just keep going and going and, eventually, we would know when we hit the sweet spot. We had a really good connection and it allowed us a sense of freedom.”

A traditional pagan parade that rolls through the centre of Much Deeping in episode one provided one of the challenges facing the director, with “many, many” extras brought in to fill out the crowd scenes. “But my costume designer Charlotte Mitchell just went mad for it and was bringing in animal masks, creating them herself and designing different costumes,” Lonsdale says.

“We spoke about the formation of the parade, how it would move and what would happen within the scene while all of this giant procession was going on. We sketched it out and spent a lot of time planning camera moves, because you have very limited time to shoot it. There was a lot of organisation and a lot of rehearsals, and it was fun in the end.”

The Pale Horse, coproduced in the US by Amazon Prime Video, follows in the footsteps of Phelps‘ previous Christie adaptations – And Then There Were None,  The Witness for the Prosecution, Ordeal by Innocence and The ABC Murders. Lonsdale says the latest in the series, distributed by Endeavor Content, stands apart for its 60s period setting and its compelling characters.

“We’ve got such an incredible cast – Rufus is incredible, Kaya [Scodelario as Hemia] is amazing, Sean Pertwee and the witches. It’s really the sunshine horror of the quintet,” she says. “I think and hope there’s a beauty to it and that it’s a really entertaining and interesting psychological look at Mark Easterbrook.”

But not even witches could see where this story is heading. “It’s going to surprise a lot of people,” Lonsdale adds. “I don’t think you can imagine where it’s going to take to you.”