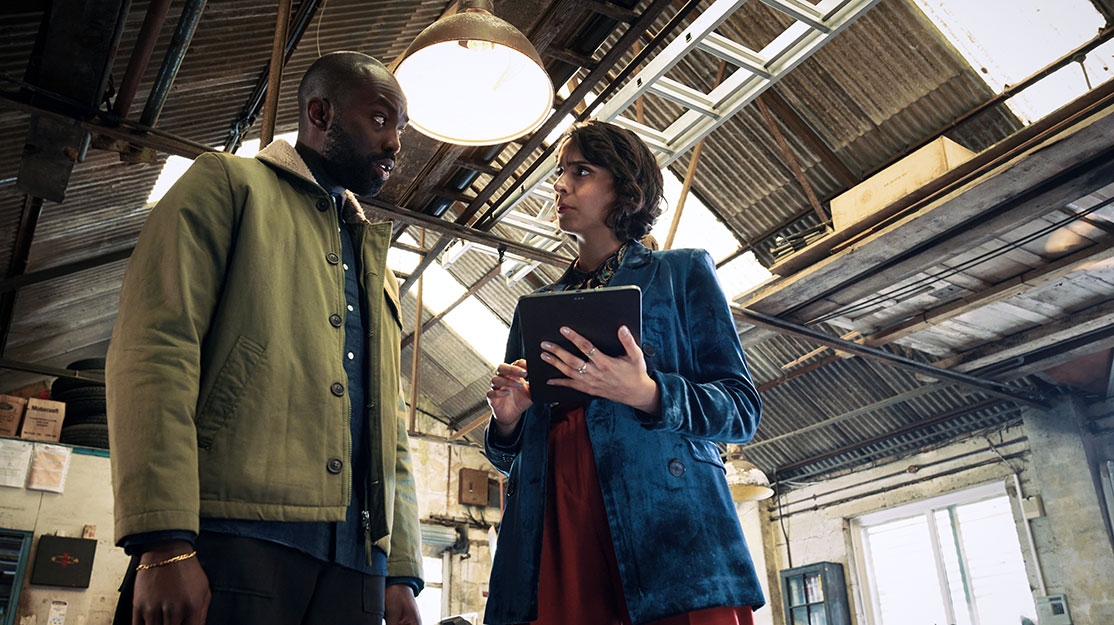 Giri/Haji creator Joe Barton tells DQ about jumping through time for The Lazarus Project and discusses the art of balancing high-concept ideas with audience-grabbing entertainment.

Now in his latest original series, the writer is playing with time once again in The Lazarus Project, a time-travelling sci-fi adventure that blends James Bond and Groundhog Day to gripping and compelling effect.

When George (Paapa Essiedu) wakes up one morning and finds himself reliving a day from six months earlier, he thinks he’s lost his mind. Work milestones and his wedding to Sarah (Charly Clive) have all been undone. But when he meets Archie (Anjli Mohindra), she invites him to join the Lazarus Project, a secret organisation that has mastered the art of reversing time whenever the world is on the edge of global extinction.

George, one of the few people who can remember events that are undone when time spins back, is brought in to help track down the enigmatic Rebrov (Tom Burke), a wanted criminal hellbent on detonating a nuclear warhead. But when personal tragedy strikes, George is torn between saving the world and trying to reverse time to bring Sarah back to life.

“It started as this big sci-fi concept but then, for me, it was about how to tell an intimate story within that,” Barton tells DQ. “I came up with the idea of the world ending all the time and the Lazarus Project is this group of people who can undo it. Then once you’ve got that concept, you can go a number of different ways with it. You can do a big action spectacle or you can go smaller and intimate. There’s an art house-version of it, there’s a [action director] Michael Bay version of it, there’s whatever. And it was about trying to find something that was a little bit of both.”

The ‘checkpoint’ idea – that events from more than six months into the past cannot be undone – then gave Barton the boundaries for a character story that would bring George’s personal life and the implications of his new abilities into sharp focus.

“Really, it was about working out how to tell this intimate story about this couple and particularly about one guy and his moral decisions that he wrestles with because of the situations that he’s in. The moral questions about time travel, the philosophical questions it raises, are really interesting,” he says. “Is one life still worth saving if you’re going to change the course of a billion lives, but those billions of people will never know their lives have been changed? There are interesting conversations and ideas that sit alongside spectacle and explosions and car chases, which you don’t always get to do.”

The checkpoints also introduce a natural ‘ticking clock’ into proceedings, and with it undeniable pace and urgency, because when the next checkpoint is reached, events in the past can no longer be undone.

“You don’t really think about it but if there is a time limit on something, even subconsciously as a viewer, it gives you that impetus and just raises the stakes,” the writer adds. “That was built into the concept and that was what was exciting about it.”

Working under the show’s previous title, Extinction, Barton fleshed out the concept with producers from Urban Myth Films (War of the Worlds, Atlantis) before sitting down to write all eight episodes at his kitchen table at the start of the pandemic. Yet despite creating a complex world for the backdrop of the series, Barton had just a short outline for each episode before he started writing.

“Interestingly for this one, there wasn’t a plan,” he says. “I had a paragraph on each episode and then just went away and wrote it. I’d done other things where we’d done more planning, you set out the whole thing and know exactly where you’re going. This one was a little bit more ad hoc.

“It was a challenge because of the nature of it, and certainly there were times, even when we got to the point of filming stuff or were in the edit, where we said, ‘Oh, that doesn’t make sense.’ So there were a few things that had to move around. The show is complicated – it’s time travel, flashbacks, time loops, time loops in flashbacks. There was a lot. Maybe we should have done more planning!”

Echoing real-world events, the catastrophe that leads George to discover his unique abilities is a deadly pandemic that sweeps the globe, leading to scenes featuring now-familiar facemasks and a desperate rush to an overcrowded hospital. Barton wouldn’t have known fiction would mirror reality when he first started work, and says it was a strange experience filming those early scenes.

“It was weird. We thought about changing it for a while but for the nature of what we needed it to be, there was nothing else, so we took a gamble, hoping that people would go with it and want to watch something that had a bit of a pandemic in it,” he says. “It’s only in the first episode.”

Fans of Giri/Haji will recognise Barton’s desire to play with form and narrative in The Lazarus Project, as well as the idea that small moments in an individual’s life can have huge knock-on effects. The writer says Giri/Haji’s cancellation after only one season was “bruising experience” and one that affected his approach to writing The Lazarus Project, which launches in the UK on Thursday on Sky Max and NOW.

“Coming out of Giri, we were really proud of it, it got good reviews but it wasn’t widely seen and it got cancelled pretty quickly,” he says, “so I was thinking, ‘Well, I also want to make sure this is really entertaining.’ My personal philosophy writing it was, beyond the philosophical questions and the moral stuff that interests me, it’s got to be an entertaining show. People should be able to just watch it and enjoy it. Not that they couldn’t with Giri – it would just be nice if people watched it.”

Directed by Marco Kreuzpaintner (Beat), The Lazarus Project arrives on TV amid a spike in dramas that explore time loops in various ways, including Russian Doll and Life After Life. Barton notes that what sets his series apart those shows, and films such as Groundhog Day and Palm Springs, is the influence and control characters have over the loops.

“For Bill Murray in Groundhog Day, it just happens every day. It’s completely out of his control and he doesn’t know what the fuck’s going on,” he says. “With this one, you become aware that people are behind it and it is a decision people are making to turn back time. It starts off as a Groundhog Day thing because George is like, ‘I’ve just woken up six months earlier,’ so we do that, but then he needs to set about endangering the existence of the planet to force the Lazarus Project to turn back time and save this one person.

“It becomes a different kind of story from those other time-loop dramas and this character also has more agency in terms of his experiences and his relationship with time travel. That’s what’s a bit different. But within that, we do tell stories of characters stuck in time loops and what time travel does to everyone. There are lots of flashbacks – you learn about all the characters because it’s fun. People enjoy it and I enjoy watching it, so we wanted to have our cake and eat it too.”

At the beginning, George is a warm, likeable and funny character, and he and Sarah will quickly win the sympathies of viewers. However, Barton says George finds himself in a “Breaking Bad-esque” descent as he faces up to the moral and ethical dilemmas over whether he can – or should – manipulate time travel for his own ends.

“Here you have this character who you very much sympathise with early on before their moral compass is completely and continuously pushed and challenged so, by the end, George goes to some really dark places,” he says. “It was all about starting with that idea that here’s a character who’s trying to save his partner’s life. That’s an altruistic thing and something everyone can relate to, but to do that he has to go to some incredibly extreme lengths and he does some terrible things.

“The other side of a time travel thing is the more terrible things he does, the closer he gets to undoing all the terrible things he does. It’s that question of if you do something awful, if you commit murder, but you know that thing you do may be undone, is it still as bad? If you’ve still done it but it’s been undone, where does that leave you morally? People will choose whether or not to go with him. Whether they still root for him at the end will be interesting to see.”

Just as there wasn’t a full outline for the series, Barton left plenty of room to discover how the story would end as he wrote it beyond a “vague notion” he had at the beginning. When it came to writing the final script, however, “the whole episode changed by the time we got to it,” he says. “We were making it up as we went along, really.”

Distributed by NBCUniversal Global Distribution, The Lazarus Project is peppered with moments of humour and levity that break up the darker, more tense moments facing a group of characters trying to save the world and some standout action sequences that might have come straight out of the Michael Bay playbook.

That trademark blend of humour and drama “is just the way I write. That’s the only way I know how,” Barton says. “Generally, you go into a scene knowing what you want to achieve and then you start writing in the characters’ voices. I think everyone has a different tone. I just think people are funny. With the Lazarus Project and the members of the group, they live in this big sci-fi organisation and do these incredible things, but even in designing the headquarters of this place, we were like, ‘Where do they make the tea? Where are the toilets? What’s the office gossip?’ It was always about keeping them grounded and believable but funny characters. I hate it when things are too po-faced.”

When it comes to writing a time-travel series, Barton says the challenges are in the detail, from working out the logic behind the rules of the world to simply explaining what the Lazarus Project is.

“Whenever someone talks about things like a black hole in space or a supercomputer, you have to use the kind of technobabble that sounds realistic when a human being is saying it, and not just, ‘Oh, we need the power cells to plug into the flux capacitor,’ or whatever. It’s just about making sure you don’t get lost in the science but you don’t completely ignore it. It’s very tricky,” he says.

There’s also the question of landing the ending in a way that doesn’t leave viewers feeling cheated. Barton – who is now working on Netflix series Half Bad and the streamer’s upcoming espionage feature Our Man from Jersey – promises there will be no magic wand that helpfully resolves any outstanding plot points, though there is a new concept introduced towards the end of the series that he hopes viewers will buy into.

“In a detective drama, if you have a detective standing over a body saying ‘police shit,’ we totally buy it. But here, you’re dealing with, essentially, nonsense,” he adds. “There’s no such thing as time travel, but people have to buy it. They have to believe there’s a secret lair with a secret organisation under Tottenham Court Road that has a time machine, and you have to sell that. It’s a challenge.”