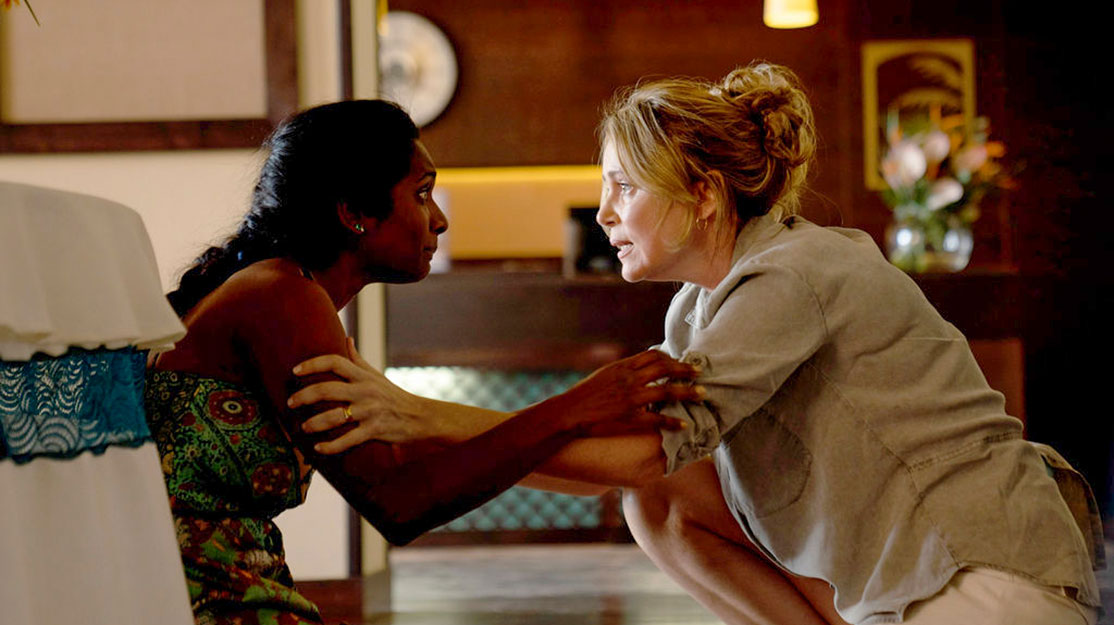 In the firing line

Crossfire executive producer Chris Carey, MD of producer Dancing Ledge Productions, talks DQ through a pivotal scene in the three-part thriller, in which holidaymakers are caught up in a terrorist attack at their picturesque hotel.

It’s always hard to pick a favourite scene, especially when the scripts are as good as Louise Doughty’s were for Crossfire. It’s a startling original piece of writing, steeped in adrenaline and emotion throughout, and remarkably controlled given it’s her first original screenplay for television.

Already one of the most significant novelists of her generation, it was an honour to be reunited with her on this project and produce it for the BBC.

Crossfire demonstrates Louise’s considerable storytelling skills, combining visceral edge-of-your-seat action with truthful and relatable characters. That her scripts attracted the attention of Keeley Hawes and the rest of our brilliant cast, as well our incredible director Tessa Hoffe, is testament to that quality.

Produced by Dancing Ledge Productions in association with Buddy Club Productions, and distributed by Fremantle, Crossfire is set in a luxury resort in the Canary Islands where Keeley’s Jo has her world turned upside down by gunmen storming the complex.

The series explores the consequences of the secrets we keep, the risks we take to conceal them and the burden of guilt that, in this case, comes as a direct result of those extreme consequences. Amid the rocket-fuelled action, there is a scene in episode three that properly captures this intention, when Jo (Hawes) is back at home trying to go back to her life the way it was before the shooting.

We see Jo outside in her garden in the rain. She is getting the washing in while remembering the moment in Tenerife when she had to tell her friends Abhi (Anneika Rose) and Miriam (Josette Simon) that their husbands are dead. This is a beautifully written scene that plays to Louise’s desire to examine the aftermath of traumatic events, exploring the impact on the victims and how their past, present and future lives are fractured in the wake of their horrendous experience.

This scene examines the absolute truth in Jo’s past while in the present she is standing in the rain in the English countryside. These two moments are in such sharp contrast and demonstrate that fracturing of time so deftly.

Tessa’s direction took Louise’s scripts and elevated them, not only in the shooting of the series, but also in the cutting room in the way she and her editor Dermot Diskin worked with the material. They built on Louise’s fantastic blueprint, and the result delivers a moment as truthful and emotionally real as this.

This sequence also really speaks to one of Louise’s strongest hopes for the series – which was to properly honour the experience of coming home and living with the trauma of having experienced those events. She was adamant that the significant part of the final episode was spent in the aftermath of the event, and no sequence sums it up better than this one.

I remember watching it in the edit for the first time and being incredibly moved by it and genuinely thrilled that, for me at least, the best part of the drama came here, in the final episode, after the attack and when the audience has had two-and-a-quarter hours of relentless action and adrenalised drama.

Up until this point, the audience has been watching a fast-moving drama, anxious for what might be around the corner, so for Louise and Tessa to be able to change gears and deliver a powerful counter-point experience for the audience felt like very impressive and assured filmmaking. I think it’s the two of the best minutes of television I’ve ever been involved in.