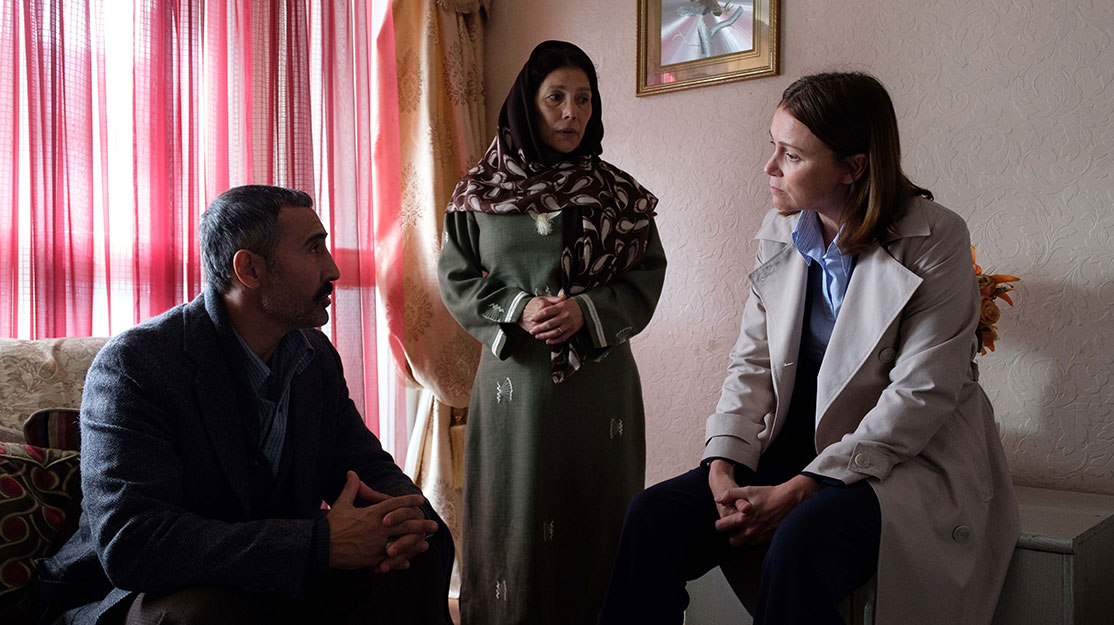 Producer Alliea Nazar takes DQ inside the making of ITV two-part factual drama Honour, about a detective who brought five killers to justice for the death of a young woman murdered for falling in love with the wrong man.

In 2006, 20-year-old Banaz Mahmod was killed for falling in love with the wrong man. Five members of the Londoner’s family were later convicted of her murder – a so-called ‘honour killing’ – after her body was discovered buried in a suitcase.

Banaz’s story was told in a 2012 documentary from filmmaker Deeyah Khan, called Banaz: A Love Story. Now, British broadcaster ITV is behind two-part factual drama Honour, which shows how DCI Caroline Goode led the investigation, at first to find Banaz and then to capture her killers, after learning that the police may have missed five opportunities to save her because they failed to act on reports of her family’s threats.

While the project had been long in the making for Hughes, producer Alliea Nazar (Stan Lee’s Lucky Man) came on board only a few months before filming commenced, having been approached to join the series by executive producer Liza Marshall.

“I was familiar with the case but I didn’t know what I didn’t know, so it’s been a journey of learning on my part. Having read the script, I definitely felt it was a story that needed to be told,” Nazar tells DQ. “But it’s one I felt I could contribute to and help develop. On a project like this, you want to have various perspectives around the table.

“I also love Gwyn’s writing. She has incredible depth and a way of communicating very weighty emotion in quite an expedient way that never feels exploitative. Part of telling this was not being sensationalist, and I hope we stayed on the right side of that where we didn’t show violence or Banaz in terms of when her body was discovered. We didn’t show anything graphic at all. We were all about focusing on the human emotion, the investigation and the affecting journey of bringing those killers to justice and discovering what happened.”

Nazar says the ambition of the programme was not to remake Khan’s documentary but to shine a new light on Banaz’s story through the perspective of Goode, who was a consultant on the drama, in the hope of reaching as wide an audience as possible.

“These kinds of crimes are on the increase and it’s a cross-community issue and a cross-cultural issue,” she continues. “Now with [the Covid-19] lockdown, it’s more relevant than ever. Even if only one person is able to watch this and phone one of the helplines, then we’ve done our job. But also, when this happens to people, as with any crime, people don’t always know they are victims and sometimes seeing something helps people identify that they may need help.

“This is not about demonising a specific community. This is about helping women who need help to get help. It’s about keeping Banaz’s memory alive and hoping her death isn’t in vain and, in doing so, raising awareness.”

Key to the development of the series has been the involvement of people involved with or close to the case, such as Goode. Hughes has also been in touch with Banaz’s sister, Payzee Mahmod, who now campaigns against child marriage, while third sister Bekhal remains in hiding after giving evidence against their father, who was convicted of Banaz’s murder alongside an uncle and three cousins.

A lot of Nazar’s work involved ensuring the script was accurate alongside script executive Kathleen McLynn and script supervisor Emma Thomas. Further authenticity was added through a collaboration with Nazir Afzal, the show’s legal advisor and a former chief crown prosecutor for North-West England.

“He was invaluable. He’s an eminent authority in the legal areas of child sexual exploitation, violence against women and honour-based violence and we were incredibly lucky to have him,” the producer says. The production also worked with many advisors who could provide guidance about the Kurdish region of Iraq, which relates to Banaz’s family background, with linguist consultant Bayan Karimi supporting the production with translations and advice about dialect.

Distributed by ITV Studios, the series opens when Goode first learns about Banaz’s disappearance. Through the investigator, viewers will learn more about honour-based violence and how Banaz was failed when she had asked for help.

“She was determined to right those wrongs. She would not let it go until she got justice for Banaz,” Nazar says of the now-retired police officer. “At the beginning of the case, she didn’t know Banaz had died. But once she did, she was a dog with a bone. Lots of the police officers I’ve spoken to say that is how she is in terms of her determination and focus. As they uncovered the case and what happened to Banaz and the series of police failings, her team became more determined than ever to bring those killers to justice.

“Nothing anybody says in the show is overtly fictionalised because Gwyn has spoken directly to all those individuals. I spoke to Caroline on a regular basis; she’s a very warm person. She’s extremely dogged, determined and fastidious. She is just very, very inspirational. Keeley’s performance wonderfully captures her humility, humour and empathy and passion. It’s a very truthful performance.”

The Durrells and Line of Duty star Hawes isn’t just leading the drama on screen, however – she is also an executive producer on the series through her Buddy Club production company, which produces with Marshall’s Hera Pictures (Temple).

“In terms of acting, she’s the number one you would want. She’s a wonderful collaborator and she’s the same behind the scenes,” Nazar says. “She didn’t phone it in [in terms of exec producing]. It isn’t just a title at the end of the credits. She really did exec it. She’s great on scripts. She has a great overview and ability to see how things might land, bringing her on-screen experience behind the scenes as well. Considering this is one of the first projects she’s exec’d, it didn’t feel like that and I definitely want to work with her again in the future.”

The two episodes were filmed entirely on location across London over 25 days, though initially the project was set to be a three-parter. One of the biggest challenges facing Hughes and the production team was cutting a third of the material while ensuring the script still dramatised the real events in an authentic way.

“We had to take a significant amount out to make it shootable in the time we had,” Nazar explains. “At that point, it’s creative meets practicality. The speed Gwyn had to do some of these things was quite rapid, but she really rose to the challenge. It does force you to really think about why each scene was there. Looking back, of course we would have liked three parts, but it makes the piece even stronger because it makes every single thing in the script and what’s on screen count. And we still managed to find ways to make the piece breathe.”

Behind the camera, director Laxton chose to shoot with anamorphic lenses, which create the effect of isolating some characters, particularly Goode, in the picture and blurring the focus around them. Using handheld cameras also gives the series a natural style.

“Richard felt it was really important his presence felt as unobtrusive as possible,” Nazar says. “Rather than letting the camera do the talking, it was the emotional journey. It definitely wasn’t about showcasing the director but putting the story at the forefront. There is a lot of expert skill in the simplicity of it because, although it’s a police investigation, it isn’t a police show. It’s about maintaining a very natural look and feeling within the scene.”

Nazar believes making the decision to cut out material before filming, rather than in the editing suite, was key to the successful shoot. Other challenges on set included moving locations and making the schedule work in partnership with the art department. A decision was also made to film all of the scenes featuring Banaz, played by Komur, in a single day at the start of the shoot.

“There are very big emotional scenes but she did a wonderful job,” Nazar says. “It’s a very affecting performance, which did bring everyone to tears on the day. But we could not necessarily have done that quite as effectively within the body of the wider shoot, so we made the decision to shoot her stuff at the top because those were scenes we couldn’t compromise on.”

As a producer on a factual drama, Nazar says her role is to manage a “very fragile ecosystem” of the real events, telling an affecting story and being true to both. “For me, the factual accuracy and the legal aspect of a piece like this are huge but, more than anything, it really is about the emotional responsibility of doing a piece like this,” she says.

“To develop a show, shoot it, edit it and get it on screen, everybody knows that it’s quite a journey. But what makes this piece different is that somebody lost their life. We want to remember that person, and you also want to be part of a movement that hopefully will prevent more of the same happening in the future.”

It’s for that reason Nazar says Honour stands apart from anything else she has made, and why the two-parter is more than a TV show. “It feels like an evolving, changing thing, which is happening even between filming it and now. The biggest challenge was staying true to events while delivering an affecting drama, not letting down the contributors to our show and also maintaining the welfare of the cast and crew.

“This is something that was more than just a piece of work for everyone, from the runners to the HODs. Everyone was very invested. People took this project very personally and went above and beyond every day. Everyone wanted to remember Banaz and honour her.”