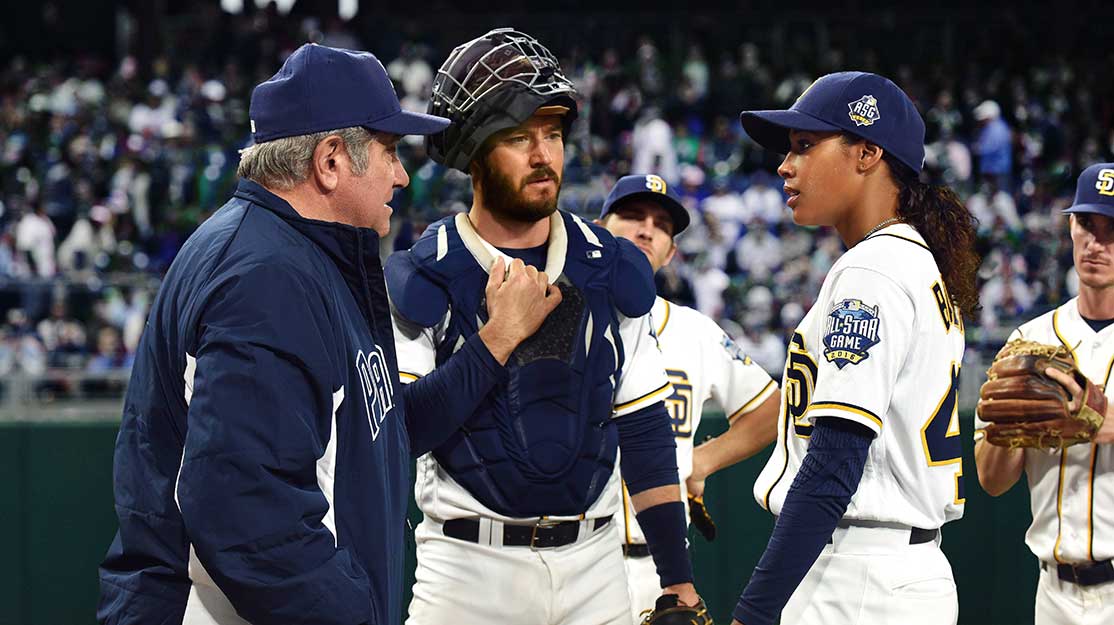 With two of the most anticipated new US shows to his name in dramedy This Is Us and baseball series Pitch, Dan Fogelman is hoping to hit a home run this year.

Somewhere in LA, Dan Fogelman is in a car travelling between the sets of two of the hottest new US dramas airing this fall. The reason? He created them both.

The first, NBC’s ensemble drama This Is Us, is described as a “refreshingly honest and provocative” series that follows the lives of a group of people who share the same birthday. The cast includes Milo Ventimiglia, Sterling K Brown and Mandy Moore.

Working with Rick Singer, Fogelman also co-created Pitch (pictured top), a baseball drama on Fox that stars Kylie Bunbury as the first woman to play Major League Baseball (MLB) when she is called up by the San Diego Padres. Both shows are produced by 20th Century Fox Television and distributed by 20th Century Fox Distribution

But to him, it’s no surprise he’s now working on two shows – the only new series to which he was attached during the 2016 pilot season. “I expected them to go [to series],” he admits, having seen his previous shows Galavant (ABC) and Grandfathered (Fox) both cancelled earlier this year. “I felt confident in the premises and the people who were involved.

“As soon as we got the calls, I just tried to get people in right away to map out the whole seasons for both shows. Everybody ends up in the same boat – getting the phone call in May, putting together the writers room in June and July – and after that, it’s out of control because you’re shooting, writing, preparing, editing and breaking stories all at the same time.”

If you think bringing two new dramas to air at the same time is hard enough, Fogelman is also working under a huge weight of expectation, particularly with This Is Us. Ahead of the series’ September 20 launch, the This Is Us trailer, released online in May, had racked up more than 100 million views. NBC subsequently placed a full 18-episode season order before episode two aired.

“I love the show so much,” says Fogelman, who is showrunning the series. “The pressure is self-creating! It’s very special; it’s unique. The show taps into something. I was just hoping [the trailer] didn’t build expectations beyond what’s possible – I hoped people would keep a level head.”

Fogelman has previously described the show as “Lost as a dramedy,” building on the same themes of love, life and friendship that were present in his 2011 rom-com movie Crazy Stupid Love. He explains: “The series plays with time quite a bit and the interconnectedness of all the characters. Lost always did a good job playing with time and connecting unrelated characters in interesting ways. We’re being really ambitious with the storytelling. Our main focus is on the main characters but, because we’re playing with time, the way everything is interconnected is complicated. You see things and learn how they are affecting present-day issues.”

In particular, balancing the tone of the series has proven one of the biggest challenges: “The characters are sentimental without being saccharine; they move people without being manipulative,” the writer says. “It’s a high-wire act.”

But perhaps, if the number of trailer views is anything to go by, This Is Us offers the kind of story audiences are yearning for amid the recent slew of superhero and fantasy dramas.

“I have been saying for while that 20 years ago there weren’t comic book movies or superheroes on TV,” Fogelman explains. “There tends to be a groundswell for things that aren’t around as much. It’s inspired by TV from the 1980s and films of the 1970s like Kramer and Kramer and Terms of Endearment, which aren’t being made as much.

“It’s got to be special if it’s going to work. There’s so much on with TV and film. If you’re not doing something really well, I don’t think you have a big chance of succeeding. I’m still mystified by the response to the trailer!”

But compared with This Is Us, Pitch is a whole new ballgame, not just because of its storyline but also due the fact it is the first scripted series to be officially associated with MLB. It debuted on Fox on September 22 and will complete its initial 10-episode run on December 8.

“Without MLB, it would have been a no-go for me,” says Fogelman, who reveals that the idea for Pitch was initially developed as a movie before being moved to the small screen.

“It was a complicated deal. At times, people were asking if I’d do it without MLB, with fictional teams. That was a non-starter for me. I’m less interested in that show. My vision was to have a very authentic show about a special young woman making it in the major leagues. Without that it just felt false. We needed MLB and we needed to find the girl. I would have passed on it or pushed it aside without one of those things.”

With a licensing deal in place to use real teams and real stadia – the Padres’ own Petco Park was taken over by the production for 10 days to film the pilot before the baseball season started in April – the other piece of the jigsaw was finding the star.

“It was a long process to find Kylie,” Fogelman explains. “We were scouring everywhere – LA, New York, checking acting schools all over the country. We were reaching out to university softball and athletic teams but we weren’t finding what we were looking for. We met interesting actors but so many boxes needed to be ticked in terms of acting believability, athleticism and the ability to carry a TV show. They weren’t checking all the boxes. One day, Kylie came in to read and then, later on, I watched her tape back and knew she was the one.”

As Ginny Baker (Bunbury) makes her debut for the Padres in the pilot, viewers might question where the series could take her in the future. But Fogelman, who is an executive producer on the series, is reassured that there is a “road map” in place to take the series into multiple seasons.

“The story of Pitch is a young woman becoming the first woman to move into the MLB,” he says. “The rest of the season goes from being about the first woman to make it, to what kind of woman she is going to become and where she makes friendships and relationships. How is she going to operate in this world? It’s a coming-of-age story. She’s figuring herself out. That was the key part of the show for me.”

Coming from features, Fogelman admits he didn’t grow up in a writers room culture but he has been exposed to the daily grind of television over the past four years,.

“I tell everyone not to be shy and to take ownership,” he says. “A lot of people come from writers rooms where it’s autonomous and they’re nervous all the time. I’m always wary of that. I’m besieged all day by making decisions so I empower everyone I’ve hired to do their own work.”

Directing two films next year, Fogelman’s immediate future will be spent flipping back and forth between big and small screens. “It’s all just storytelling at the end of the day,” he adds, nonchalantly. “But TV is more intimate. Films released into 3,000 theatres aren’t really character-driven, so writers are now more drawn to TV.”

tagged in: Dan Fogelman, Fox, NBC, Pitch, This Is Us