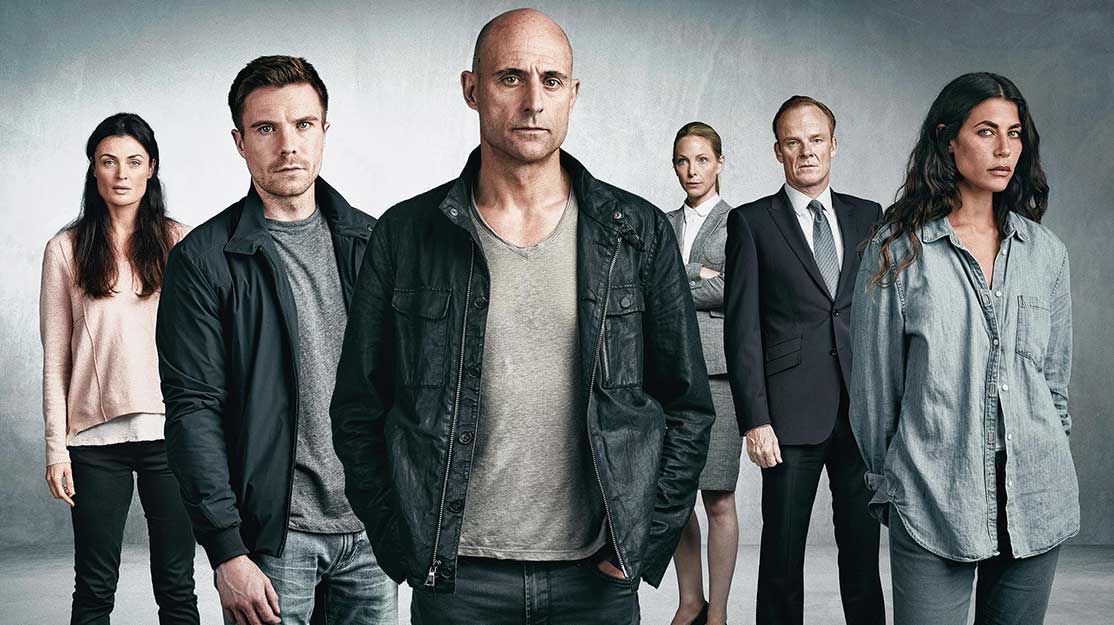 The stars of Fox Europe and Africa’s first original drama, Deep State, tell DQ why this isn’t just another espionage thriller – and why actors are well suited to playing spies.

Inside a conference room overlooking the central London set of Deep State, actors Joe Dempsie and Karima McAdams are engaged in a wordless conversation with producer Tom Nash. Uncertain looks and nods are exchanged as they determine what they can and can’t say about the eight-part series ahead of its launch. State secrets would be easier to extract than any potential spoilers.

What can be said is that the story centres on Max Easton (played by Mark Strong), an ex-spy whose past comes back to haunt him when he’s summoned away from his new life in the Pyrenees by George White (Alistair Petrie), head of covert MI6/CIA team The Section.

White convinces Max to return to the field to avenge the death of his estranged son Harry (Dempsie). But the stakes are soon raised when Max finds himself at the heart of a covert intelligence war, immersed in a widespread conspiracy to profit from the spread of chaos in the Middle East. So begins a dangerous game in which Easton must determine who he can trust, what the truth is and how can he uncover it.

When the series opens, Dempsie’s Harry and Leila, played by McAdams, are both members of The Section, together on a posting in Tehran where their mission is to assassinate five prominent Iranian nuclear scientists.

Harry’s fairly green to this spy game, recently given his licence to kill, while half-British, half-Moroccan Leila is a linguistics expert with her feet in both the Arab and Western worlds.

“They’re on a job together in Tehran, a deeply religious place, so they have to go undercover as a couple working in an English-language school,” says McAdams, who has also starred in Vikings. “That’s where it becomes interesting because spies essentially don’t trust anyone so the idea of a relationship is incredibly complicated. But you can’t help your human instinct. They have a journey with each other and whether it’s real or not, you explore that with them.”

It’s a relationship Dempsie believes spies and actors have in common. “Harry and Leila are having to play this part so they find themselves in this fairly confusing situation where the lines become blurred, as it sometimes can on a film set. Then you have the added layer of the mistrust of everyone around you and that adds a fascinating element to their relationship.”

Dempsie describes showrunner Parkhill’s script as “a real page-turner” that juggles politics, espionage and familial themes in settings that include the UK, the US, Iran, Lebanon and France.

“I was guilty as anyone of watching a TV show but also half flicking through Instagram or whatever at the same time,” the Game of Thrones actor admits. “This is something that demands your full attention. At the heart of it, it’s very character-driven and that’s what hopefully might make this stand apart from other spy dramas or thrillers. You get to see these characters in a familial setting and you explore their interpersonal relationships in a way that you don’t often see. It’s not all about the action. They’re not just these highly trained machines. There are layers to this.”

The script also stood out to McAdams, but for a different reason. “There were so many scripts being bandied about at that point that weren’t sitting right with me because there was so much gratuitous nudity,” she says, adding that Leila is an incredibly private woman struggling with an undisclosed horror from her past. “She’s vulnerable but, within this group of people she’s working with, she’s incredibly capable. There is no difference between man and woman in this group and I think that’s incredibly refreshing. They don’t ever refer to her as a sex symbol, she’s never thrown into a job because she’s female. Matthew has written a character that is very different from what I’ve been seeing.”

At the emotional centre of Deep State is Lyne Renée, who plays Max’s wife, Anna. Living happily with her husband and their two children, Anna’s world is shattered when she discovers Max’s secret past and the fact he has another son.

“Anna comes to new truths and realities that were hidden from her, and she goes to look for them as well,” the actor says. “She’s not just the mother with the two children. The beauty of this part is how certain strengths come with that. With everything that comes to light, she has to remain strong. Anna is a lioness and you’ve got to be very careful because when you come across a lioness with two cubs and she’s hurt, you are in deep trouble because they become stronger.”

Anna is very different from the character Renée played in a similar drama, Sky1 and Cinemax copro Strike Back, a Mossad agent who was in the thick of that show’s political storyline. “Here my character has nothing to do with the political side of the world,” she notes. “All the consequences happen to everyone but my position is not political. It’s the domestic side, the emotional side. I haven’t been running around with guns or working undercover, so that is the biggest difference.”

The strain on Anna is one Renée faced every day on set as she imagined herself in her character’s overwhelming situation. “I was a little worried about how I was going to pull this off,” she explains. “It’s so intense what happens to Anna. All the things that happen to her have never happened to me before so I really had to think, ‘What are the implications? What happens to a person who has to go through all that?’ But by letting it go, I created the freedom to step into each moment every day. I felt like I pushed my own boundaries and succeeded in showing these emotions, which was not easy. I need to do a comedy after this!”

Also among the cast is Alistair Petrie, who recently starred in fellow spy drama The Night Manager. He plays George White, the head of The Section who brings Max back into the fold – a reunion on and off-screen, as Petrie and Strong previously worked together on 1996 period drama Emma.

“There’s an alchemy to making a television show. If you bottled it and poured it onto a script, everybody would be doing it but it’s a difficult, nuanced thing to do,” he says, highlighting the importance of writer, cast, director and crew. “You put all the elements in place and you’ve got a really good chance, but it starts with the script. As soon as I read it, I thought it was fantastic.”

Petrie says every character in Deep State faces moral dilemmas through the series, something he believes sets it apart from the usual spy/thriller/action shows. “Where drama can be so successful is that its job is to hold a mirror up to society,” he explains. “We take a good look at ourselves. A really successful drama works on a lot of those levels and it doesn’t matter what that genre is.

“What Deep State does rather brilliantly is every character has all got very familial moral dilemmas they have to confront. A lot of it is based on truths and lies about protecting family and what you do to protect your family. That’s why drama is so successful on television and film; we’re given stories and then we’re given choices and we’re given moral dilemmas, brilliantly wrapped up in an exciting piece of television. If you can engage an audience like that and create well-written characters with fantastic foundations, you can take an audience anywhere.”

With a second season already confirmed ahead of the launch of the series, which debuts in the UK tonight, Fox clearly believes Deep State has found the formula for that elusive alchemy.