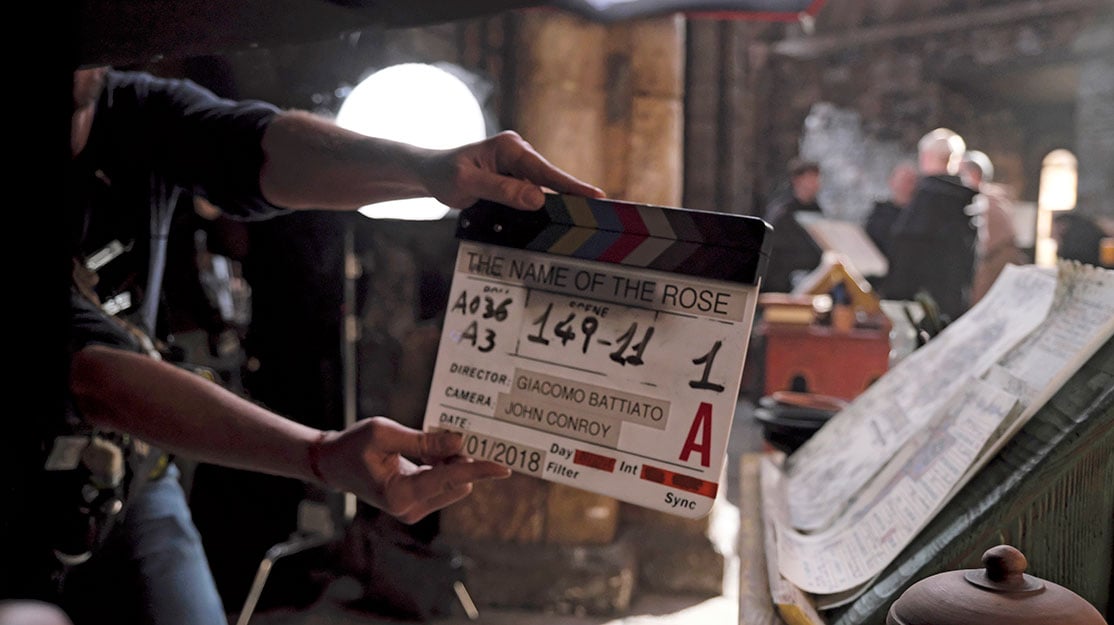 DQ heads to the legendary Cinecittà Studios in Rome to see filming for Middle Ages drama The Name of the Rose, based on Umberto Eco’s bestselling novel.

Inside the broad stone walls of the monastery, the air is thick with fog. Monks wearing brown habits and sporting tonsure haircuts walk briskly across the snow-covered courtyard to avoid the path of five oncoming papal guards, dressed in chain mail and dazzling yellow tunics.

Around the perimeter are various buildings and outhouses – a blood-stained butchery, a glassmaker’s shop, a small graveyard and a balneae filled with barrel-shaped bathtubs.

Rising above them, however, are the intricately detailed entrances to the church, which faces the monastery’s imposing wooden entrance gate, and an octagon-shaped tower that will eventually rise eight stories into the air with the help of the numerous green screens that have been lifted into place around the backlot of Rome’s legendary Cinecittà Studios.

It’s here that filming is underway for The Name of the Rose, an English-language adaptation of Italian writer Umberto Eco’s bestselling novel. Some 38 years after the book’s publication – and 32 years since a film adaptation starring Sean Connery and Christian Slater – Italian producers 11 Marzo Film and Palomar have partnered with Tele Munchën Group and broadcaster Rai for an eight-hour event series starring John Turturro (The Night Of), Damian Hardung (Red Band Society) and Rupert Everett (My Best Friend’s Wedding). It is due to debut next spring.

Set in Italy in 1327, the story follows Franciscan monk William of Baskerville (Turturro) and his apprentice Adso of Melk (Hardung) as they arrive at a secluded monastery in the Alps, where they witness a series of murders. While Baskerville and Adso are investigating and searching for the killer, the Pope orders merciless inquisitor Bernard Gui (Everett) to destroy the Order of St Francis – with Baskerville on his list.

Across a 20-week shooting schedule that began in January and was delayed by severe snowstorms at the beginning of March, the €26m (US$32m) production will film in Rome for the interior of the church and the cloisters, as well as scenes set in forests, woodland and fields. The Abruzzo region to the east of the capital will be used to create the mountainous backdrop of the monastery’s isolated location, while Perugia, further north, will double for scenes set in Florence.

It’s here at Cinecittà, though, that the bulk of production is taking place, both on the backlot and in a number of its cavernous, terracotta-coloured sound stages that have been used to recreate the look and feel of life in the Middle Ages to hugely impressive effect.

The production team have built a refectory, chapter hall and a working paper mill that, in the story, supplies monks with the paper they need to write the books that fill the labyrinthine library, which is spread across dozens of rooms on the highest six floors of the monastery’s tower.

Calling action is director Giacomo Battiato, who also co-wrote the series alongside Andrea Porporati and Nigel Williams. “It’s a huge production and I said no 10 times, and then I said yes finally,” he admits. “The challenge is enormous but, at the same time, to have eight hours to tell those 600 pages of the novel is great because there are a lot of elements that are fantastic and can be exploited in a long space.”

Battiato polished scripts first written by Porporati and then Williams, and says he was drawn to the numerous elements that make up Eco’s story and go far beyond the novel’s thriller premise. In particular, he points to the father-son relationship between William and Adso, which has been fleshed out to greater effect than in the novel or the 1986 film. The same goes for Adso’s relationship with a peasant girl (played by Antonia Nina Fotaras), a secret love story that leads him to question whether to follow his faith or his heart. Then there is the religious element, with the Franciscan monks’ life of poverty set in contrast with the wealth of the Papacy.

In bringing the story to the screen, however, Battiato is also placing great emphasis on the visuals in an attempt to add light and colour to the Middle Ages – a period generally recognised for being dark and dull – not least in the costumes and the stunning frescos reproduced on the walls of a dining room and inside the bedrooms and chambers of the monks and the Pope. “The 14th century is a century of revolution in philosophy, art and science, so it’s a moment of great transformation,” the director says. “If you look at the paintings of Giotto, they are full of colours. So I decided wherever I could to put strong colours.”

Authenticity is a key word on the set of The Name of the Rose, with production and costume design paramount. “We try to put as much money as we can on the screen instead of around the screen,” notes Davide Nardini, Palomar’s head of international affairs for TV and films. “We went through a long and detailed process of research trying to see everything from the costume and set design. Then it’s the same casting the actors. We have to keep the spirit of the book. We could have made something stereotypical but we wanted to make something that looks and feels very authentic.”

It’s the same with the language. While filming in English is no longer necessary to ensure international sales, the common language at a monastery in the 14th century would have been Latin. “So now [for the series] it’s English. It makes sense,” Nardini says. “Everyone speaks English with an accent. We didn’t want it to feel too old in any way; we looked to have a bit more modern dialogue but keeping the original style and tone. No one speaks fluent English except the English. It gives a nice flair to the origins of the characters.”

The walls inside production designer Francesco Frigeri’s office are covered with stunning design sketches that show the monastery atop a snow-covered mountain, completely cut off from the world. The tower is immediately eye-catching. Around 300 people have been employed across the design elements of the series, with four construction managers overseeing the set builds alone. A further 180 people have been on set each day.

“The idea was to start from the tower of Babel but, because Babel is round, we added the octagonal structure, as that’s what is in the book,” Frigeri explains over diagrams that show the beehive structure of each of the library’s maze-like floors. “The first thing I started to design was the tower, which is a symbol of the series.”

Herbert Kloiber, MD of Tele München Group (TMG), which is distributing of The Name of the Rose through its sales arm TM International, says his company became a partner on the series due to the scale and ambition of the project. “Eco is a saint in Italy so for Rai it’s a huge property,” he says. “Eco died two years ago but he was very much behind this project. He felt the book would be done more justice in an eight-part series than in a two-hour movie.”

In fact, 11 Marzo president Matteo Levi says the most significant challenge came in convincing Eco to sell the rights to his book. “I think a decisive element was the proposal to work on a series with strong editorial control in Italian hands and [for Eco] to know that even if shooting was in English, all the filming would be in Italy.”

A long-time passion project for Levi, the series represents the chance to adapt one of the books and authors he describes as “among the most important of the 20th century.” He believes the story is still incredibly contemporary, “from a library that contains all the knowledge of humanity [referring to the internet] to the topic of the conflict between a ‘rich’ church and a church closer to the poor. Immigration is also very significant in the story, represented by the poor fleeing persecution and gathering outside the abbey for protection.”

Palomar president Carlo Degli Esposti picks up: “With this being a multi-layered series, we believe different audiences will find diverse elements of interest. We have an engaging and suspenseful crime and an intelligent theological discussion that mirrors current topics like freedom of speech and religion. All this, with a cast of such great quality, will seduce the audience into a world that is complex and engaging at the same time.”

Kloiber describes a two-year chase to sell the series, the footnote to a long development process spearheaded by 11 Marzo. Once on board, however, TMG was happy to sit back and let the other partners drive the project forward, not wanting to muddy the creative waters.

“We always go into these things without pre-selling [to other broadcasters] because, if we like a project and believe in it, we’re just going for it,” he explains. “That eliminates a lot of editorial problems. Those elements often delay things a lot, so that hasn’t happened in this case. We’re not trying to maximise coproduction schemes in terms of trying to get money here and there from different places. Shooting is completely in Italy but we’re not doing a coproduction that is trying to exploit tax schemes from various countries to make this happen.”

Rai is building a slate of international-facing dramas that appeal to audiences both at home and abroad, with fellow period Medici: Masters of Florence, which launched in 2016, having sold to broadcasters around the world.

“Italy has a cultural heritage made up of centuries of history and experiences of universal value,” says Rai Fiction director Eleonora Andreatta. “Rai’s fiction has shown it can be an open window to the world, capable of transforming the heritage of our culture and our literature into stories of great modernity that are also able to speak to a global audience.

“The Name of the Rose is an excellent example of how a rich culture and accessible language can form a fascinating synthesis in literature. The novel has a wealth of layers that, through its genre and powerful story full of suspense and mystery, manages to talk about today and highly relevant themes like tolerance, the universal value of culture and the acceptance of others.”

Palomar CEO Nicola Serra concludes: “This series uniquely combines genre and universal topics, romance and logic, and period and current topics, something the audience has never seen on screen before. The intelligence of the piece, the quality of the set, the complexity of the characters and the quality of the director and actors will deliver something truly unique, entertaining and astonishingly unexpected at the same time.”