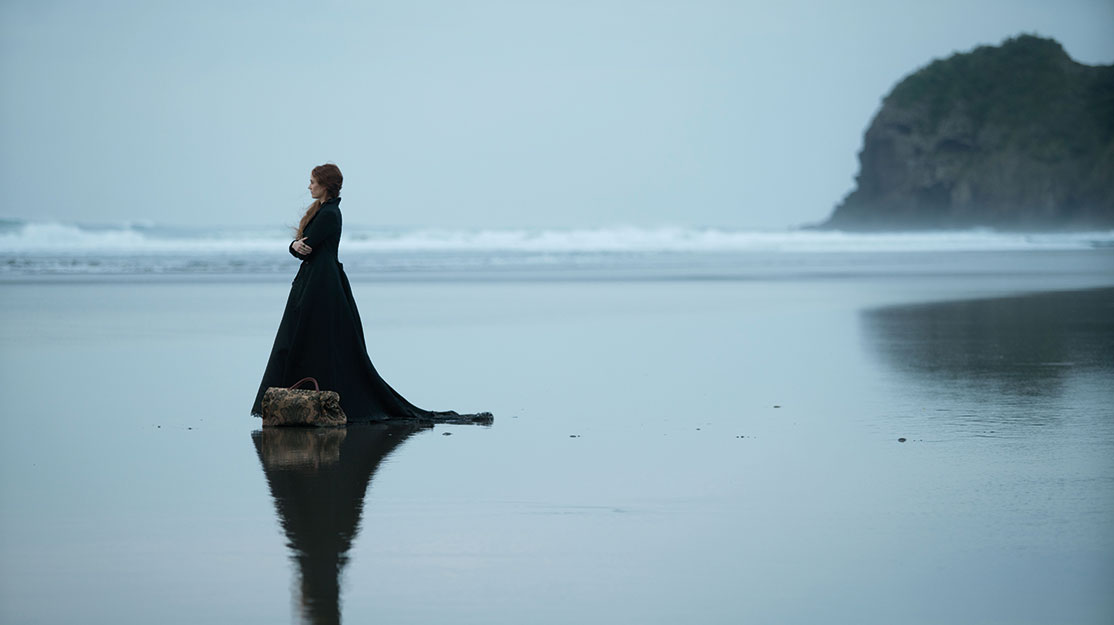 A starry cast lights up the screen in The Luminaries, a BBC and TVNZ coproduction based on Eleanor Catton’s award-winning novel. The author, who has adapted her own work, and director Claire McCarthy tell DQ about transforming the book for television.

Among the literary prizes handed out for novels, the Man Booker Prize is one of the most prestigious, recognising the best original novel written in the English language and published in the UK.

When Eleanor Catton scooped the award in 2013 for her book The Luminaries, she became the youngest winner in the prize’s history, while it was also the longest ever winning novel, coming in at 832 pages. In addition, she was only the second New Zealander to win, beating 151 novelists who submitted their work that year.

The chairman of judges, Robert Macfarlane, described it as a “dazzling work, luminous, vast… a book you sometimes feel lost in, fearing it to be ‘a big baggy monster,’ but it turns out to be as tightly structured as an orrery.”

It was only a matter of time, then, before it would be brought to television, although it is not an exaggeration to say the book has undergone a huge transformation to reach the small screen. Overseeing the process has been Catton herself, who has written the six-part series for BBC2 in the UK and TVNZ in New Zealand. It is produced by Working Title Television and Southern Light Films, with Fremantle distributing.

A 19th century tale of adventure and mystery set on the Wild West Coast of New Zealand’s South Island in the boom years of the 1860s gold rush, the story is described as an epic story of love, murder and revenge.

In a unique structure, the book sets out events from the perspective of multiple characters, whereas the series focuses on defiant young adventurer Anna Wetherell, who has sailed from Britain to New Zealand to begin a new life. There she meets the radiant Emery Staines, an encounter that triggers a strange kind of magic that neither can explain. As they fall in love, driven together and apart by fateful coincidence, these star-crossed lovers begin to wonder: do we make our fortunes, or do our fortunes make us?

Eve Hewson (The Knick) and Eva Green (Penny Dreadful) lead the cast as Anna and Lydia Wells, respectively, alongside Himesh Patel (The Aeronauts) as Emery Staines, Ewen Leslie (The Cry) as Crosbie Wells and Marton Csokas (The Equalizer) as Francis Carver.

Working Title Television MD Andrew Woodhead had scored rights to the novel before it was shortlisted for the Man Booker Prize, but Catton says it was never part of the conversation that she would adapt it herself.

“He began sending it to various people [scriptwriters] to read and everybody probably read the first few pages and said, ‘Absolutely not,’” she says. “In some ways it’s quite a niche project. It’s a New Zealand setting, it has this astrological superstructure. It’s not a historical story in any way, it’s entirely invented, so it’s not as if you can research it.

“So as more and more people turned it down, months were passing and I couldn’t stop thinking about it. I just started seeing it in my head. Amazingly, he said, ‘Why don’t you give it a go and see what happens?’ At the start of pre-production, I was up to 61 final drafts of the first episode. It must be at least double that now – and the first ever script bears almost no resemblance at all to the finished episode.”

In the book, Catton wanted each person’s perspective to interpret the plot as a different kind of story – one person sees a murder mystery, another a heist gone wrong and, for Anna and Emery, it’s a love story. But to make it work on screen, the writer upended the entire structure to focus on Anna and Lydia’s relationship.

“The challenge was always how can we make the more experimental and original elements of the story work,” she explains. “There’s a very strong magical subplot in the book but we needed to figure out how to translate it to the screen. There’s an extended courtroom scene at the end where you’re offered a choice between a magical, impossible but quite romantic story, or something logical and plausible but maybe less romantic, and you have to choose. That’s much harder on screen, because seeing is believing.

“Bringing it back to the two women was a choice about focusing the drama on this essential question of do you make your fortune or does your fortune determine who you are. Anna’s relationship with Lydia in the show, more so than in the book, is a seduction. There’s a sense of them testing one another and not being entirely honest with one another. It’s such an enormous cast, we could have taken any number of avenues. But the moment we cast these amazing women, every time they do a scene together, I’m just like, ‘Oh my God!’”

Doubling up her duties as an exec producer meant Catton was heavily involved throughout the series, not least in casting. She praises Green for being the first to sign on when she could have waited to see who she would be playing against. “It was something I felt really strongly about, but I really was so pleased with who we cast,” she says. “I don’t feel like there’s a weak link in there. It’s actually very distracting because they’re all so good looking, enigmatic and such interesting actors.”

Behind the camera is Claire McCarthy (Ophelia), who is revelling in bringing 1860s New Zealand to the screen. “It’s such a rich world, and a world we haven’t really seen before,” she says.

The series, the director explains, dances a fine line between genre – period, fantasy and astrological – while almost lampooning a Victorian sensation novel. Those stories were popular in the same period and introduced outlandish plot lines in often familiar domestic settings.

“In our retelling, the challenge has been about streamlining it, because it’s such a hefty tome,” she continues. “If we didn’t have Eleanor writing the scripts, I don’t think it would have been as subversive a retelling. She’s almost told it from the inside out.”

McCarthy has been working with production designer Felicity Abbot and cinematographer Vincent Baker to define the visual aesthetics and style of the show and reveal the story from Anna’s perspective. “There’s a sensual quality about the show but there’s also these kinds of genre elements – murder mystery and treachery, betrayal and these kinds of big, dramatic themes,” she says.

On set in New Zealand, McCarthy has found herself surrounded by many of the crew members and landscapes that were integral to making feature films such as The Piano, The Lord of the Rings, The Hobbit and fantasy series The Shannara Chronicles. So while a lot of The Luminaries is filmed on location, the production team also built the central town of Hokitika, where the story plays out.

“We decided on this 360-degree set in this mud bowl; it’s quite visceral and rugged,” the director says. “We really wanted it to feel like it was a living, breathing frontier town, right at the edge of the world. We built some sets for practical reasons and just to support the elaborate sequences we do have. We also have a large on-location set down in the real Hokitika on South Island, which has a very specific landscape and mountain range. The skies and the waters are really one of a kind.”

McCarthy jokes that the series is a “strange hybrid” between television and film. “It’s an epic tale,” she adds. “To be the director across six episodes is a unique, authored experience. TV is so bold. You can challenge characters to do things with story and the way it’s being told. Cinema can be more conservative. I find it really rewarding being so involved in the process. I really hope the audience likes it.”

For Catton, bringing The Luminaries to the screen has been “extraordinary, it’s such a dream come true.” She adds: “It’s almost like a new version of the book, it’s almost completely reimagined. So I hope there will be something for everyone.” 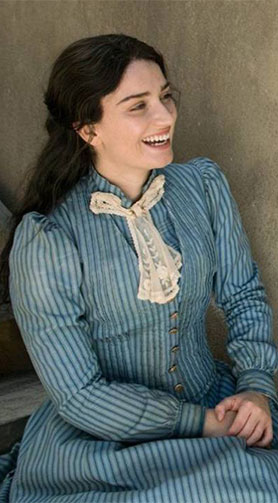 Grilling Eve
Eve Hewson is used to playing dramatic roles, with parts in TV series The Knick and feature films Robin Hood, Bridge of Spies and Papillon. Yet as Anna Wetherell in The Luminaries, she takes the lead in a series that has put her through her paces. “It’s been non-stop. It’s really intense, emotional and physical, but I’m really proud of it,” she says.

With Eleanor Catton adapting her own novel, Hewson says the series offers viewers a chance to see a different version of the same story. “It’s a smart and interesting adaptation,” she says. “Eleanor’s writing is genius, and in a TV series we have all these characters and the time to make the relationships distinct.

“What’s beautiful about the story is it’s a period piece, it’s mystical and wonderful and imaginative but it’s also the story of what women go through today and what they went through back then,” the actor continues. “There have been a lot of conversations about how we approach it and the way it’s dignified and truthful. We keep it true to the character and story.”

Hewson says she has been surprised by the number of women on the crew, which is led by director Claire McCarthy, describing the atmosphere on set as “nurturing.” She also says how nice it has been to be supported by a women director as she takes on Anna’s “very dark journey.” She explains: “I don’t know if it would have been the same if we’d had a male director by my side. There’s a closeness and I know I’m protected by her. We could have certain conversations about things that happen to women.”

The Irish actor also questions whether The Luminaries, and Anna’s story in particular, would have been dramatised for television if it were set in the present day, noting how much more palatable certain subjects are to audiences if they are placed in another time.

“There’s some weird thing about period dramas. Because it’s so far away, the audience accepts what happened to women more easily than accepting it’s happening today. Anna is a prostitute in the book but it’s much harder to get a six-part series on the BBC about prostitutes living in our time right now. For some reason, it’s more acceptable in a period drama.

“I just hope people connect with it and they feel what we all felt when we read the scripts. I hope they fall in love with the characters and Anna and they enjoy themselves. I hope we have made an entertaining show. Even though it’s well written and directed and the acting’s great, I hope people are still entertained. That’s the joy of TV.”