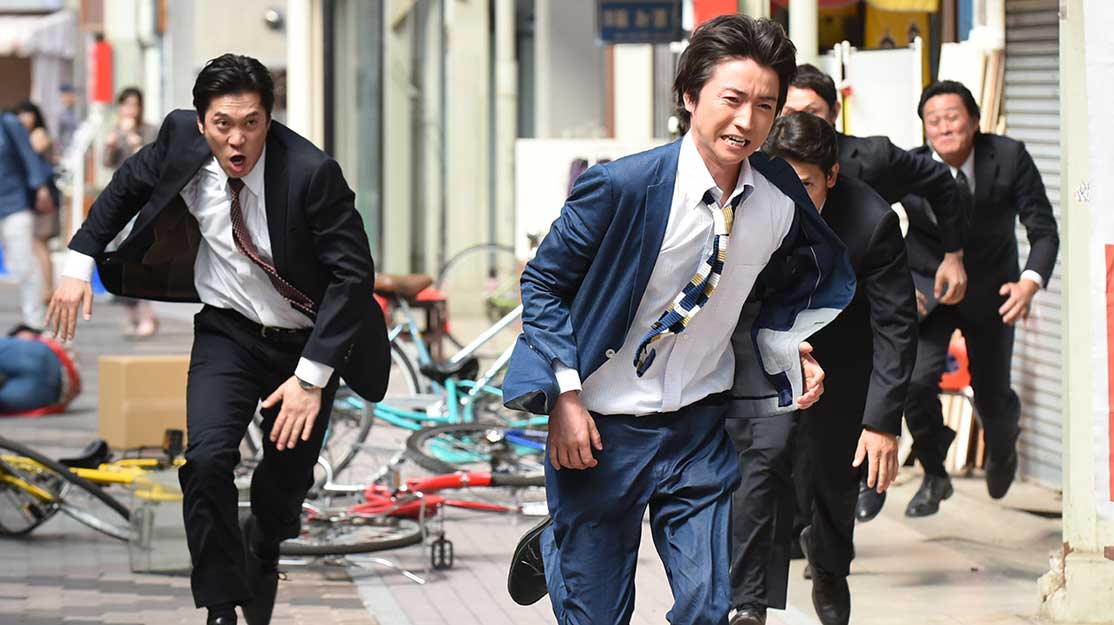 Japanese producer Akino Suzuki tells DQ about conspiracy thriller Lost ID, in which an engineer fights to uncover the truth when his identity is erased.

A man’s life is plunged into chaos when his identity is erased in Japanese drama Lost ID.

Todo Shinichi, played by Tatsuya Fujiwara, is a brilliant engineer with a loving fiancée – but his world turns upside down when his name is erased from Japan’s family registration system, his bank accounts are seized and his employment terminated.

Who is behind the injustice – and why? Over the course of the series, Shinichi sets out to determine the truth.

Originally broadcast last July on Nippon TV, the suspense drama is now being shopped internationally, with the potential for remakes in other markets.

Here, Nippon producer Akino Suzuki reveals the origins of the Lost ID, explains how she worked with screenwriter Takehiko Hata to create the serialised storyline and outlines how the production process was inspired by international drama series.

What are the origins of the series?
I noticed people on social media creating alter egos and began to think about how people were seeing me and what my existence in this world means. I started wondering, ‘Is my idea of a happy world really the ideal one? It might be a happy place for me, but how will others find it?’ I wanted to use these questions as a basis for creating a show that, for example, features a character who is living happily but is actually despised by the people around him. Then somebody suddenly frames him and he loses track of his own existence. That’s when I started having discussions with Takehiko Hata, the screenwriter of Lost ID.
It was also around the time when the My Number identification number system [a 12-digit ID number issued to all citizens and residents of Japan and used for taxation, social security and disaster-response purposes] was being implemented by the government, and we talked about whether it was good or bad and how unsettling it is to have your existence replaced by an identification number. In the drama, we call it your Personal Number. I wanted to use such a numbering system in a story and illustrate how uncertain a person’s existence is and question whether the reality we believe in is really true. In thinking about how to increase the entertainment value of the drama, I decided to pose the question, ‘Who is trying to drag me down?’ Fundamentally, however, the question is, ‘What does my existence really mean?’

How was the show developed for Nippon TV?
I didn’t want each episode to have its own conclusion and come full circle. Instead, I wanted the show to feel like a real drama series that continues. This was something I had wanted to do ever since I was working on [2015 supernatural action drama] Death Note. Many series have a main storyline but each episode ends on its own. I wanted each episode to leave the audience hanging, without any idea of what would unfold in the next episode. I wanted them to feel impatient about the next week and to be unable to stop wondering about what would happen. That’s what I asked Takehiko to create, and that’s how we got this drama that leaves you in the dark as to what’s going to happen next. It seems like a lot of people enjoyed it. The main theme was serious in that it made viewers wonder, ‘What am I?’ but I also put a lot of effort into making it entertaining by making some parts flashy, exciting and mysterious.

Why did you want the story to have continuity?
I like that type of drama. I like foreign dramas and have enjoyed the appeal of continuous plots for a long time. Movies end in two hours and novels end when you finish reading, but the exciting thing about a drama series is you have to wait for an entire week for the next episode, and it takes three months for the whole thing to conclude. You have something to look forward to the next week. In the case of romantic dramas, you’re left wondering what will eventually happen to the couple; with suspense dramas, you’re in the dark as to who the criminal is or what crisis will strike. These types of continuous plots are uncommon [in Japan] these days and I really like them, so that’s what I wanted to produce.

How did you work with the directors to create the visual style of the show?
I’m sure we gave directors Toya Sato and Mitsuru Kubota huge headaches! We informed them that it was important to keep the drama suspenseful, but two of the things directors worry about most are how the actors are feeling and how to depict the main character’s feelings and way of life. I think it was challenging for them to achieve these given the lack of predictability.

Who are the lead cast members and what do they bring to the series?
Tatsuya Fujiwara was the only person I could think of for the role of Shinichi, whose situation grows increasingly difficult. It’s hard to find actors who can portray a character who comes under mounting pressure. Shinichi suffers a lot in the first part of the series, with friends dying one after another and people telling him they hate him. There are actors who, when you put them in such a role, look so distressed that it’s hard to watch them. But with Tatsuya, you know that he can eventually get his revenge. He makes you believe there’s a strong side to him that can withstand the growing pressure and difficulty, and that allows us to incorporate unimaginable twists into the plot.
With the other roles, my aim was to cast actors who were the complete opposite to what viewers would expect their character to be. Tetsuji Tamayama, who plays Shinichi’s college friend and government employee Keisuke Koyama, has a ‘nice older brother’ image but we made his character aloof. Sanae, Shinichi’s fiancée, is innocent but Fumi Nikaido gave the character a lot of depth. Nikaido has great acting skills and we put her in a girl-next-door role. Bartender Eiji is more subdued than the personality that actor Kei Inoo has in entertainment shows. Hitomi Kuroki plays Shinichi’s mother, who appears to be hiding something. We were hoping viewers would find her strange behaviour suspicious. Jun Shison plays Itsuki, Shinichi’s younger work colleague, who normally plays even younger roles but we made him portray a vile character. We also asked Hiromi, who is not an actor but a star in his own right as an entertainer, to join the cast. The point was to cast actors so that we create some discomfort, but in a good way. It matches the catchphrase that we put out in the beginning –‘All the characters are suspects.’

Where was the series filmed and how do you use the locations on screen?
The drama was mostly filmed in Tokyo. We used drones but it was challenging because there are strict regulations on their use in Tokyo. Drone shots were a crucial aspect of the programme, so we tried to use them when we could but we had to find places that allow them. If the location had strict regulations regarding drones, we had to resort to computer graphics. It was hard to avoid using computer graphics for the shots above buildings, but we agreed with the directors that we should use actual drone shots as much as possible.

What were the biggest challenges you faced during production?
It was a constant challenge to take the most interesting parts of the script and depict them for the screen while making the scenes as realistic as possible. You don’t want to lose [any interesting elements from the script] during filming. I relied heavily on the directors to address this difficulty.

How would you describe the current state of TV dramas in Japan?
A lot of dramas in Japan are remakes of original works such as mangas and novels. I previously worked on creating the screen version of Death Note, a very popular manga that Nippon TV produced as a movie. Just a few years ago, I thought there were a lot of these but the number continues to rise. The intellectual property rights to almost every book and manga in bookstores are unavailable. When I was in elementary school, most of the dramas were original dramas and remakes were rare. As someone who was inspired to produce drama by watching original series, my personal challenge is to make them popular again, and I’m sure it’s the same for the Japanese drama market.
Japanese dramas focus a lot on the characters’ feelings and the goal is either to understand what they’re feeling or to see them grow. When you achieve those aims, the story ends and there’s no way to keep digging deeper, so these shows usually end after the first season. This is a unique trait of Japanese dramas. So when you create a series like Lost ID in this type of environment, while it may differ from the norm, that could make it appear even more innovative.

Are viewers’ tastes changing in Japan or do the same shows continue to be popular?
We’re beginning to see both ends of the spectrum. Nippon TV-produced dramas such as Your Home is My Business, Pretty Proofreader and Tokyo Tarareba Girls have all met high acclaim. These are shows you have to keep watching to see what happens at the end of the season. That said, the demand for TV dramas that offer a complete story per episode is still high. There are also a lot of dramas that have a core following. In the past, viewer ratings were the only way to evaluate the success of programmes, so people’s preferences were quite similar. But nowadays there are many types of dramas and platforms on which to view them, so varying tastes are developing. We need content that will be enjoyed by just about anyone, but we also need content that will attract a fan base. I believe it will be increasingly necessary to meet the needs of both types of consumers. All the broadcasters here come up with three or four new programmes each season. It’s going to become important to distinguish which ones will target the general public and which will target a core, niche audience. We at Nippon TV produce our Wednesday and Saturday dramas for the general public and our Sunday dramas for the core audience.