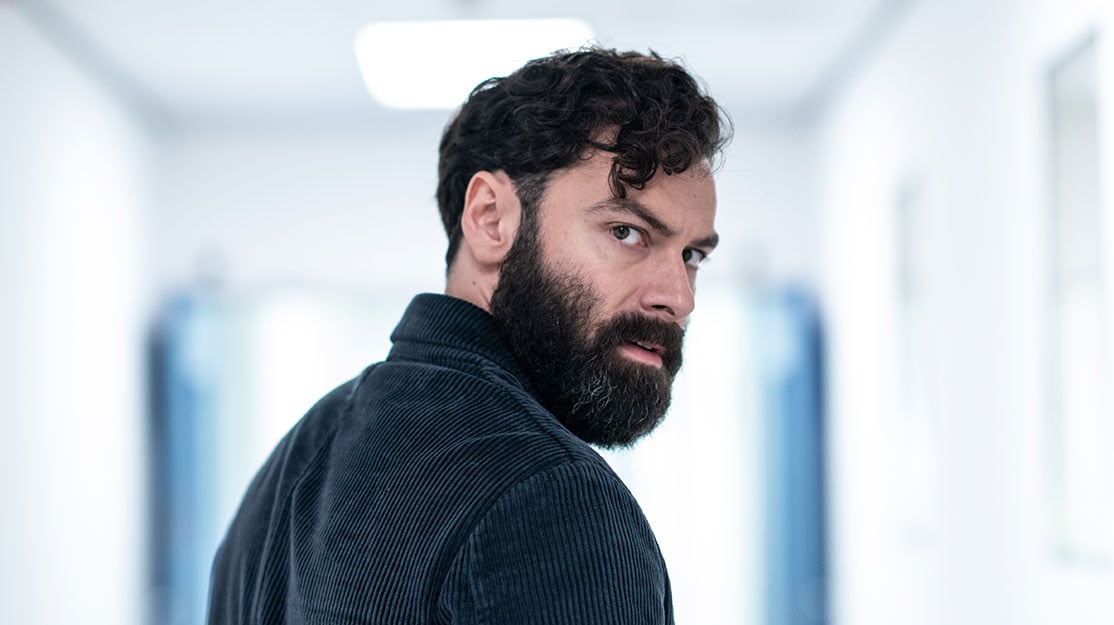 Writer Peter Berry and executive producer Jake Lushington preview ITV’s psychological thriller The Suspect, in which Aidan Turner plays a psychologist helping police investigate a suspicious death while keeping more than a few secrets of his own.

When it comes to psychological thrillers, so much of the success of the series often rests on its ending, when a twisty-turny plot involving a host of characters will hopefully reach a satisfying, authentic and believable conclusion.

When DQ speaks to writer Peter Berry and executive producer Jake Lushington about their collaboration on forthcoming ITV drama The Suspect, it’s certainly an issue that has been at the forefront of their minds as they prepare to screen the final episode for the broadcaster.

Thrillers that pose a lot of questions in the beginning now come under much more scrutiny than they might have done 10 years ago, Lushington says, as viewers demand better endings and not just conclusions that are tacked on without providing the answers the audience want.

Based on the novel of the same name by Michael Robotham, The Suspect stars Aidan Turner (Poldark) as Doctor Joe O’Loughlin, who appears to have the perfect life – a devoted wife, a loving daughter, a successful career as a clinical psychologist, a media profile and a publishing deal. He’s even considered a hero after rescuing a young patient from a suicide attempt.

When a young woman is found in a shallow grave in a cemetery, Joe is brought on to the case by DI Vincent Ruiz and DS Riya Devi to help solve the mystery. But known for risk-taking and rule-breaking, and coming to terms with a debilitating illness, how far do the people around him know the real Joe?

As head of drama at World Productions (Vigil, Line of Duty, Showtrial), Lushington is often sent crime novels with a view to adapting them for television, and he says Robotham’s work stood out for a number of reasons. Firstly, “it was really well written,” while the author’s journalistic background gave the central character and the wider story an air of authenticity despite it being a heightened thriller. The exec was also pulled into the book as he sought his own answers to who Joe is and what will happen in the end.

“Genuinely, I was in real doubt for quite a long time reading it. I enjoyed not knowing what was going on because I really felt I was learning interesting things rather than just being fed a lot of red herrings,” he says. “It was building a contradictory picture. That’s why I liked it – and I only gave it to Peter.”

Lushington had previously worked with Berry (Gangs of London) on BBC conspiracy thriller The Last Enemy and was confident, based on their previous conversations, that Berry would enjoy adapting The Suspect. He was right.

“This was a page-turner, and that’s the book you want to adapt,” the writer says. “The important thing about the book is the story, because there are wonderful books that don’t have a great story. That’s a real bear trap when you start adapting those. But this one, I couldn’t put it down. I was drawn in. I needed to know what happened at the end.”

At more than 400 pages and written from the protagonist’s point of view, Robotham’s novel needed some work to reshape it as a five-part series. “You can’t have his point of view in the TV adaption because then you would know if he was guilty or innocent pretty early on,” Berry says. His chief task was then to bring in other characters, most notably Joe’s wife and the police officers. The cast also includes Shaun Parkes (Small Axe), Sian Clifford (Quiz), Camilla Beeput (Save Me Too), Adam James (Vigil), Anjli Mohindra (Vigil) and Bobby Schofield (Time).

“It’s got to be about character. And you’ve got to keep surprising [the audience] all the time,” Berry says.

Lushington picks up: “Often the plot is presented to you by the police as a story with suspects. With this, our suspects are our protagonists. Joe has one point of view, his wife has another, and his best friend and his patient. What you build up is quite a layered variety of points of view that intrigue you. That allows it to be a character ensemble piece with a mystery at its heart, and not just a procedural.”

At the centre is Joe, a hero struggling with a very difficult medical diagnosis who stands up as an unambiguous hero – at least early on. “Then it unravels,” teases Berry. “But that’s what drew me to it because that’s what makes it a universal drama. It’s about who is good and who is bad, and then it turns into a gigantic game of cat and mouse. You just don’t understand sometimes who the cats are and who the mice are.”

As the story unfolds, the audience will learn much more about this person they initially admire, as fragments of his true identity are slowly revealed. “For quite a while, we may well suspect the worst and the audience has to hang with it to find out exactly what his sins are,” Lushington says.

Playing Joe is Turner, whom Robotham himself described as an “inspired choice” to play a character who appears in nine of the Australian author’s novels. Lushington believes this is the kind of part Turner had been waiting for, adding that the actor “grabbed it with two hands and ate it alive.”

“He’s an amazing romantic lead but I think he wanted to do a leading part with more ambiguity, with more darkness, with a real level of sophistication he has in spades within his acting,” the exec says. “Not that we all didn’t love Aidan Turner already, but I will be amazed if this performance and this characterisation is not a game changer for him in terms of how we think of him as an actor. He has made that part his own.”

Writing the series, Berry approached his task as if he was penning an original screenplay, with the novel there to help him but not confine him. He first read the book like any other reader, before going through it again and marking out scenes or sections he thought were important.

“Then I work on a very large table and I write down scenes that I like in the book on cards  and just throw them on the table in no particular order,” he explains. “I end up with a big table with a lot of cards. I don’t tend to write the script because I don’t want to fall in love with scenes, characters or dialogue. I want to get the structure right in terms of the characters.”

Only then did he take a few pages of outlines to Lushington, before throwing around a few more cards and subsequently writing the first two episodes “quite quickly” thanks to the structural and character work he had already done. “It was actually really good fun to write it. Some of them aren’t. But this one was. I really did enjoy it.”

“It was often about pushing the point of view of one character over another character,” Lushington says of his conversations with Berry. “The biggest discussion we had throughout was going, ‘We need more of him, of this other point of view, to counterpoint what we’re seeing.’ Rather than even what the story was, it was about who in the story we follow for certain bits. That seemed to be most crucial in terms of finding the right balance for each episode.”

While the characters on screen were engaged in a game of cat and mouse, the production was playing hide and seek with Covid throughout filming. However, the biggest challenge facing the crew was laid out from the very beginning in their desire to do “a London show” and actually film in the city, rather than having another location stand in. While the cost of filming there is naturally prohibitive, another issue is the lack of space in which to put down a unit base.

“Filming in London, even on a high-end TV budget, is very challenging. Just on a very basic level, 20 years ago there were so many disused car parks you could put a unit in – but now there’s not a square inch of London left where there’s just an empty lot where you can just park up and put your trailers,” Lushington says.

“So we were mad and decided to ignore all of those problems and do it anyway, which sometimes got us into a lot of trouble. But what it means is we’ve really got a proper, contemporary London show, which hopefully the audience will really react to. A lot of thrillers are generic by their nature and all of us try to make them not generic. This one was never generic and we tried to double down on that in how we filmed it and where we set it.”

Lead director James Strong (Vigil, Crime) and second block director Camilla Strøm Henriksen (Occupied) were able to call Berry if they had any questions, such as when one scene had to be relocated from a supermarket to a children’s play park. Henriksen and Berry spoke about what the writer needed from the scene and then discussed how the new location could provide that.

“Often it’s about communication, about what’s underneath within a scene,” Lushington says. “So if things do need to change, they’re changing with that in mind. You can move and change things if you understand what the heart of the scene is and how that can translate properly. That’s the key thing.”

Distributed by ITV Studios, The Suspect is set to take viewers on an emotional rollercoaster when it airs next year, with Berry promising those watching will be left in the dark about the show’s secrets until the very end. “To do that for five hours, that’s what we set out to do and that’s what I think we’ve done,” he says.

“It gets under your skin as a mood, as a piece,” says Lushington. “You get quite engaged in it, and it can make you feel a bit uncomfortable to be so close to these characters and not know whether you’re supposed to like them or dislike them. The best dramas are those where you’re right in it with them, and I really hope there’s real involvement in it. We tried to get under people’s skin and drag them into it. I hope that comes across when people watch it.”