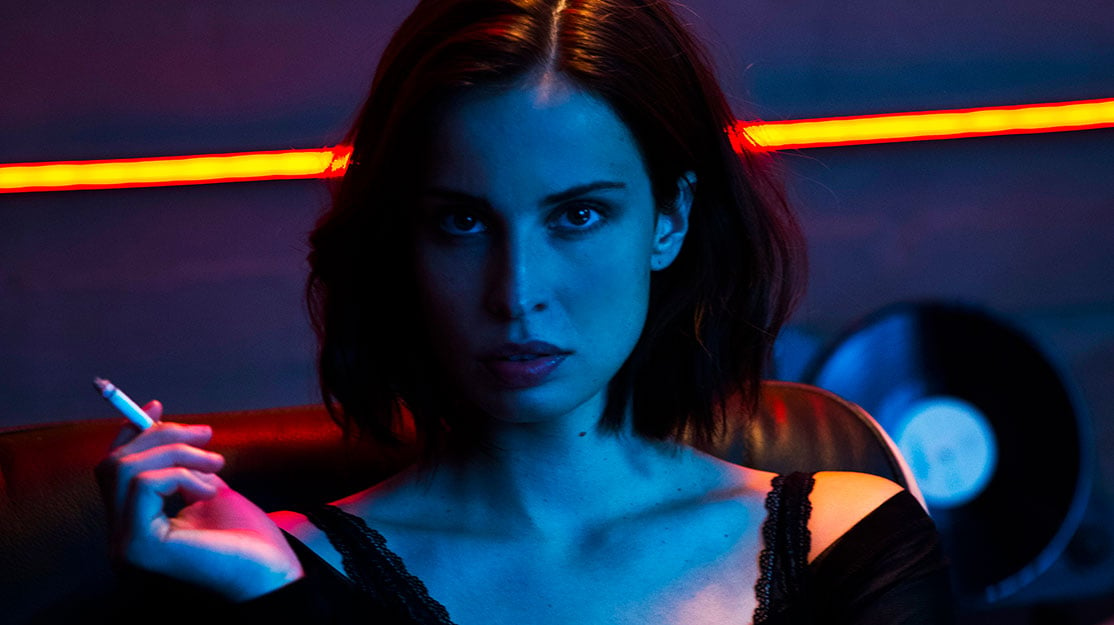 Poldark’s Heida Reed takes centre stage in Stella Blómkvist, a super-stylised Icelandic drama that is set to add a new dimension to Nordic noir. DQ chats to the actor and the key players behind the series.

When it comes to Nordic noir, there are certain traits viewers have come to expect. Moody visuals are often set against dark, foreboding landscapes, creating a style that has become synonymous with Scandinavian crime dramas like Wallander, Forbrydelsen (The Killing), Trapped and Bron/Broen (The Bridge).

But a forthcoming Icelandic drama starring Poldark’s Heida Reed looks set to breathe new life into the genre with a radical, heightened and heavily stylised look that marks it out from anything that has come before. Imagine Sin City or Marvel’s Jessica Jones filmed in Reykjavík.

Stella Blómkvist follows the exploits of the titular lawyer across three feature-length instalments – The Murder at the Ministry, The Murder at Swan Lake and The Murder at Harpa. The first film sees Stella hired to defend a low-life thug accused of murder, but she soon finds herself plunged into a violent political conspiracy that threatens Iceland’s very future.

“This is not another Scandi noir,” says director Óskar Thór Axelsson (Black’s Game, Trapped). “I like to call it ‘neo-noir.’ It’s more playful and is set in a parallel world. We’re not trying to be super naturalistic, as you would be in Scandi noir. It’s more stylised and we’re trying to have fun with it.”

Lead writer Jóhann Ævar Grímsson adds: “With the noir thing, I’ve been wary of the word because it’s being used for almost anything Scandinavian these days. Political drama Borgen has been called Scandi noir when it’s just Scandi. We are not following the Scandi noir rules, we’re going back to the roots of noir.

“We’ve got an unreliable narrator, voiceovers, flashbacks, harsh lighting and all the trappings of the noir format. It goes against the typical Scandi noir format – when there’s so much of it, you want to go in a new direction.”

The show is based on a character created by a mysterious, anonymous author, who shares the same pen name as the lead character. The first episode is based on book one in the series, with two new stories completing the trio. The project has been developed by producer Sagafilm for two-and-a-half years, with Simínn (Iceland Telecom) and Scandi SVoD platform Viaplay on board as broadcasters. Red Arrow International is distributing the series.

From the outset, the creative team sought to replicate the Sherlock format of three feature-length episodes, as opposed to one 10-episode story, for example, in another bid to shake up the Nordic noir format.

“I’ve been writing a crime series in Iceland called Pressa [The Press] and experimented with the format there, but with that show we mostly focus on longer stories,” Grímsson says. “I thought it would be more fun to have shorter bursts of stories. We’re mimicking Sherlock, a show we really like. It’s a perfect vehicle for it.”

Working together in a small writers room, Grímsson, Nanna Kristín Magnúsdóttir and Andri Óttarsson stripped down the first Blómkvist book, threw out what they didn’t need and filled in the rest. Series director Axelsson was also a regular presence in
the room.

“Stella is almost all of the things you don’t want to see in female characters – she’s crass, rude, cold-hearted, inconsiderate,” Grímsson explains of the title character. “She’s sexually promiscuous, drinks and does whatever she pleases. It’s a fun character to work on.”

Axelsson picks up: “She’s a detective and a femme fatale, so she’s a super-interesting character. We had some discussion about the tone and where to place it early on, and that was something I really liked.

“Creating the look for Stella was more in the lighting, the production design and the acting. We definitely go for more intense angles than you would go for normally because it’s a noir. Some scenes we would design to be energetic, so I knew I had to speed up or shoot it in a particular way. But it’s a mixed bag – all three shows are very different. They look very different.

“It definitely has the Scandi noir elements in there but they’re pushed into a different angle. It will be more playful, it has more of a sense of humour. It doesn’t take itself too seriously. It also takes an interesting look at Reykjavík. We’re changing the scenery a little bit in the series.”

The director, who is currently filming episodes for the second season of fellow Icelandic drama Trapped, says Stella’s character influenced the way he shot the series. “Stella’s bisexual, she’s very opinionated and she’s constantly tricking people; she can put on a mask,” he explains. “That was something I was definitely trying to play with. Because Stella has so many faces, Heida maintained that she should not change her costume a lot and she should look the same, as that helps us identify with her because she’s always pretending.”

The casting process was a drawn-out affair as the creative team sought to find the perfect actor to fill the role, eventually securing Reed, who is back in period costume to shoot season four of BBC period drama Poldark.

“Heida had something we’d seen in the character in the books,” Axelsson says. “She’s really carrying the series – she’s in almost every scene. Hiring a young actor who doesn’t have much experience could have been suicide for us, but Heida coming off three seasons of Poldark and having that experience was a huge bonus.”

“Stella is the series,” says Sagafilm Nordic CEO Kjartan Thor Thordarson. “It was a very important piece of the puzzle to get Stella right. We did test a lot of actresses – we wanted to see who would catch Stella and her tone, looks and demeanour. She’s a very tough woman but she also has her vulnerable sides. Heida basically nailed her.”

With more than 90 speaking roles, rehearsal time was at a premium, with Axelsson admitting the 48-day shoot was shorter than he would have liked. This meant the director, working with a script that contained flashbacks and one-line scenes, had to prioritise which would be afforded the most time.

Production was complicated further by the lack of darkness in Iceland during the late-spring and summer months when filming took place. “It’s a noir so it has to have a lot of darkness, but we started shooting in early April, which meant we had a month to shoot night scenes,” Axelsson says.

“In mid-May, we’re almost into 24-hour daylight, so we had to do all the night scenes first. We started really front-heavy with that. It was a night shoot throughout April and the days gradually got longer. In May, we might still have had a night scene to do, so our schedule would be midday to midnight and we’d try to get this one night scene at the end that we’d missed.

“That was difficult, and in grading now we’re trying to match stuff we shot in June to what we got in April when it was snowing. We were really unlucky with the weather. It was a really tough shoot, actually.”

For Sagafilm, the project was born out of a desire to create an Icelandic series that could be marketed around the world. Stella Blómkvist fitted the bill, as the novels are already known across Europe and would draw the kind of production partners – and budget – needed to turn the property into a global franchise. The decision to make the series available in three 90-minute episodes or six 45-minute versions was also taken to maximise international appeal.

At €3m (US$3.6m), the show’s budget is double the standard cost of an Icelandic drama, but this was “part of the plan to up the game and we can see it in the series,” says Thordarson. “There’s a lot of different things we haven’t seen before from smaller-budget series. We tried to make it look like a €10m series.

“It’s definitely not like other things in Scandinavia. I just think we’re competing with ourselves, trying to do better every time. We don’t really want to follow what others are doing; we want to be our own voice – that’s what we’re trying to do and I think we did that with [crime drama] Case, our last series. That was unique in the market. In many ways, we played with the filmmaking aspect a little bit there and we are continuing to do that with Stella. It’s very unlike Case. So I think that will continue.”

Another appeal of making Stella Blómkvist was the potential to create a long-running franchise. Thordarson adds: “We have at least eight books and they’re still being published, so who knows how many there will be in the end. We have already started looking into what’s next in the Stella saga.”

Heida’s Stella performance
As Elizabeth Warleggan in BBC period drama Poldark, Heida Reed is more used to being part of a large ensemble cast than taking the lead. So when she won the title role in Stella Blómkvist, there was only one person she turned to – Ross Poldark himself.

“I actually texted Aidan Turner saying, ‘How did you do it?’” she reveals. “Suddenly I realised what it felt like to be in his position and I remember asking him, ‘Were you shitting yourself in the beginning at the first read-through and on the first day of filming?’ He just told me not to worry and had some nice, encouraging things to say. It was interesting to feel what it would be like in his shoes a little bit, and it was nice to be able to talk to someone who understood where I was coming from.”

Having moved to the UK to embark on an acting career, Iceland-born Reed’s Stella Blómkvist part marks her first leading role in a homegrown series, after previously appearing in 2014 miniseries Hraunið (The Lava Field).

“It’s an old-school noir but in a modern setting,” she says of her new show. “Stella’s a femme fatale and detective in one, and all the villains are grotesque and over the top. It’s fun to step out of realism sometimes. All the Scandi noir stuff is as raw as you can get. We did that [in Iceland] with Case and Trapped, so it’s actually refreshing to do something a bit more fantasy-like.”

Adding to the appeal was the chance to play a role far removed from that of Poldark’s Elizabeth. “It’s always really nice and fortunate when you don’t get pigeon-holed into one thing and you get to explore how far you can take a different type of character,” she says, describing Stella and Elizabeth as extremes of her own personality. “I didn’t think I’d get it, because she’s blonde in the books – she talks about using her blonde hair as her weapon. Elizabeth was supposed to be blonde as well, so I’m always going up for blonde characters and thinking I’m not going to get them. I’m fighting the good fight [for brunettes].”

In addition to late-night shoots and unpredictable weather, another key challenge the actor faced was reacquainting herself with the Icelandic language. “I was told I had to be less clear,” she says. “Maybe because I’ve been doing Poldark for so long, I was being so careful with how I was pronouncing things because I don’t speak that much Icelandic except to my family. I got direction to be less clear and maybe more sloppy because that’s more natural, and Stella is not someone who necessarily enunciates every word. She’s someone who blurts stuff out. The longer I was there, the easier it became.”

Reed now has her sights set on a comedy role, having starred in a period drama and a heavily stylised series. But with the success of Poldark and the potential to play Stella Blómkvist for many more seasons, she could soon have two huge returning hits on
her hands.