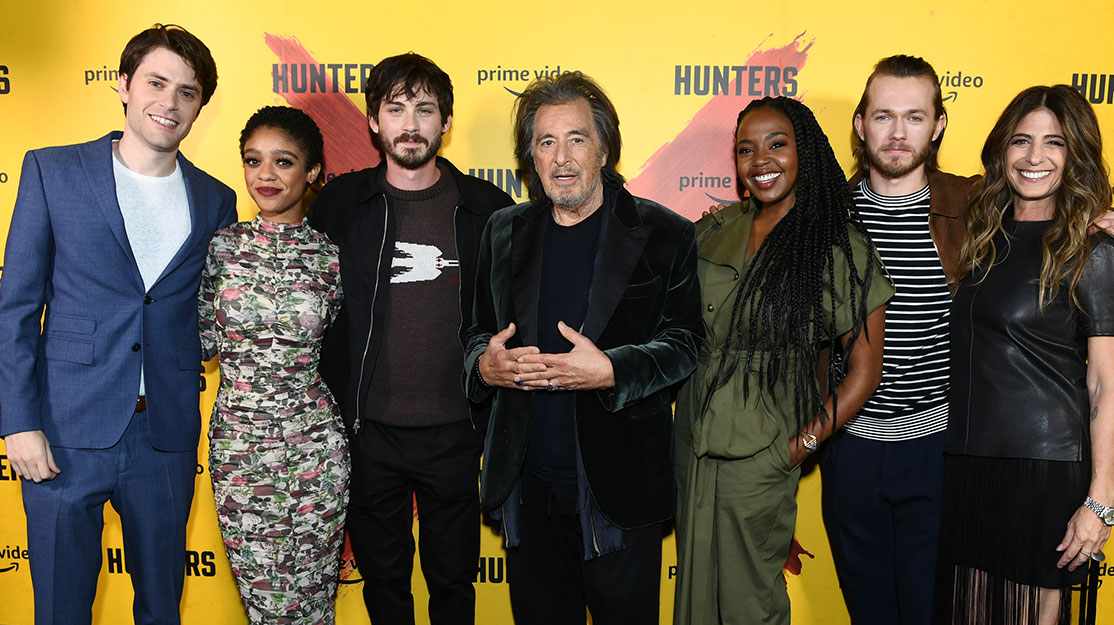 Al Pacino’s first role in a serialised drama sees him play the leader of a gang of Nazi hunters and underlines just how far TV series have come in a relatively short space of time.

With more and more Hollywood heavyweights migrating from cinema to high-end television in the past few years, it’s no longer such a surprise to see a legend of the silver screen pop up in a new show.

But there are Hollywood stars and then there’s Al Pacino, whose IMDb list contains arguably the highest number of stone-cold-classic films of living actor (we’ll forget about duds like Righteous Kill or 88 Minutes).

It demonstrates just how far TV – once seen as cinema’s inferior relation – has come in recent years, thanks in huge part to the millions of dollars invested by companies such as Amazon that have allowed the scale and ambition of high-end TV to go stratospheric.

Executive produced by another Academy Award winner in Jordon Peele (Get Out, Us), the 10-part series is set in New York follows a diverse band of Nazi hunters living in 1977 New York City.

Pacino compares doing his first high-end TV series to experimental theatre and working with the likes of Francis Ford Coppola, and says it’s a refreshing departure from shooting movies.

Discussing the differences between working on a series and a feature, Pacino says he enjoyed the room to experiment and rehearse in the five months it took to film Hunters.

“In today’s world, we don’t have the opportunity to rehearse for film as much as we used to. Rehearsals are gone, whereas in the old days, working with Coppola, we rehearsed for weeks. You had a chance to understand the role in another way, to go further and take more chances. And on Hunters, we’d sit around talking about a scene for hours,” Pacino says.

In the series, Pacino stars as Meyer Offerman, the leader of a group that has discovered that hundreds of high-ranking Nazi officials are living among us and conspiring to create a Fourth Reich in the US.

The series also stars Logan Lerman as Nazi-hunting protégé Jonah Heidelbaum, who is taken under Offerman’s wing after a family tragedy.

The series is incredibly cinematic and looked very at home on the big screen of London cinema Curzon, where the feature-length first episode was shown at an exclusive screening and Q&A in London earlier this month.

Alongside Pacino, the event was also attended by Lerman, Hinton, Boone and Austin as well as creators and co-showrunners David Weil and Nikki Toscano. The series comes from Amazon Studios, Peele’s Monkeypaw Productions and Sonar Entertainment.

Weil, whose grandmother Sarah’s experience as a Holocaust survivor informed much of the series’ origins, says the show came from his desire to write the equivalent to a comic book with a Jewish superhero as the main character.

“With so many survivors no longer with us, the onus falls on the next generation to tell this story in certain ways,” says Weil. The story itself draws inspiration from a variety of different Nazi hunters to have emerged since the end of the Second World War.

As a result, Hunters deals with incredibly serious subject matter and the showrunners were careful to be as respectful as possible.

For example, during the Holocaust, concentration camp prisoners received tattoos at the Auschwitz concentration camp complex. Weil points out the tattoos of the survivors shown in the series were all above the last recorded number given to a real victim.

“We wanted to treat all the victims of the Holocaust with great respect and not represent the tattoo of a person who actually existed and suffered in the Holocaust,” says Weil.

“I love trailblazing women and people who have a very clear point of view, who know what their background is and don’t waver from it. That’s Millie Malone to a T,” says Hinton

Austin, meanwhile, admits to having mixed feelings about his casting as Leich: “I never know if it’s a compliment or not to be cast as a neo-Nazi. But he was frankly the most fun I’ve ever had on set playing a character. He’s insane and psychotic and I love it,” says the British actor.

Pacino, who was nominated for Best Actor in a Supporting Role for his performance in Martin Scorsese’s Netflix feature The Irishman at the recent Oscars, describes Hunters as a “12-hour film.”

Toscano emphasises the desire to create something that felt cinematic and says Amazon was a supportive creative partner as the team sought to work with directors who would “would embrace their individuality.”

Pacino welcomed working with different directors on the series, in what represented another departure from shooting movies, which tend to be helmed by a single director.

“I’m very pleased with it, every episode clicks. I love the freedom of it and the fact it is so eccentric and eclectic and unpredictable. It reminds me of the old days – although everything reminds me of the old days – when you had the Living Theatre in New York City and you were seeing things for the first time and trying different things. I’m partial to it for that reason.”