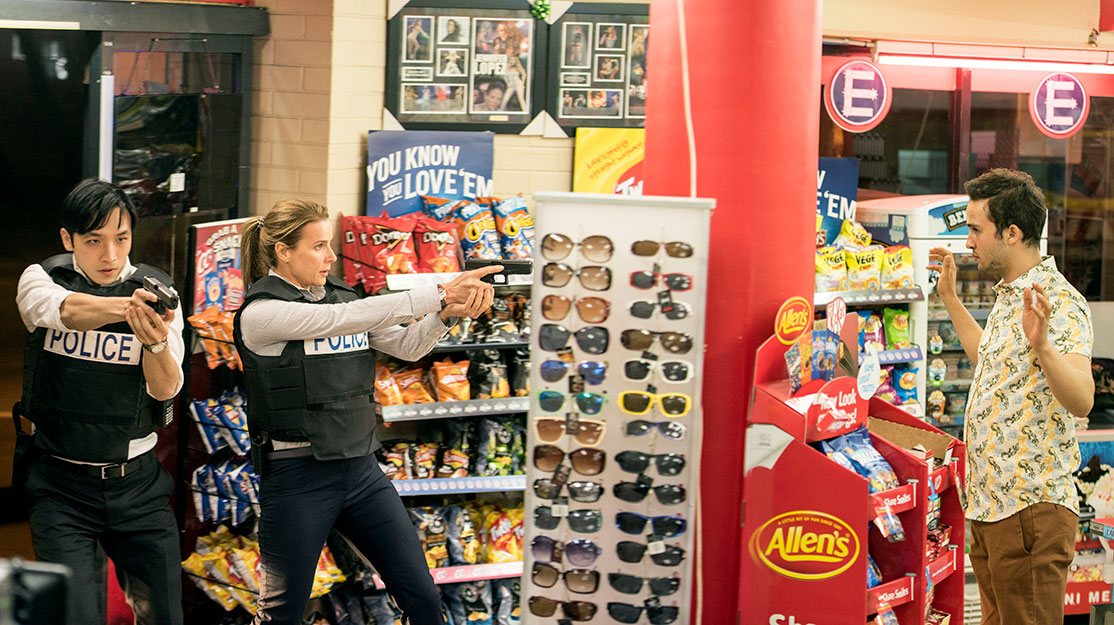 Hunt for a killer

Cops and criminals collide in Dead Lucky, a four-part drama that weaves several storylines around the hunt for a dangerous murderer. Muriel’s Wedding and Six Feet Under star Rachel Griffiths tells DQ more about the series and her ambitions behind the camera.

Sometimes it seems like actors have the best jobs in the world. Spending months filming in exotic locations such as Caribbean island Guadeloupe (Death in Paradise), Corfu (The Durrells) or Sri Lanka (The Good Karma Hospital) surely can’t seem like working at all.

For Australian actor Rachel Griffiths, however, paradise was much closer to home. “Shooting October and November in Sydney is heaven, really,” she says. “I felt guilty getting a pay packet. It’s so gorgeous.”

The state capital of New South Wales serves as the location of SBS crime drama Dead Lucky, with iconic backdrops such as the Sydney Opera House on show from the very beginning of the four-part miniseries. Created by Ellie Beaumont and Drew Proffitt, the show follows a number of interlinked storylines, centred around two feuding detectives and their hunt for a killer.

Grace Gibbs (Griffiths) is obsessed with catching the armed robber who murdered her junior officer. But Charlie Fung (Yoson An), her new trainee, blames Grace for the death of his best friend. Meanwhile, a group of international students living in a shared house think they have found paradise and a couple of greedy convenience store owners resort to deadly measures to defend their business, all while a violent fugitive is hiding on the outskirts of the city. Set across one week, Dead Lucky sees the paths of these characters collide, leaving two people dead and one missing.

Directed by David Caesar, it is a Subtext Pictures production and will air on SBS in July. DRG is handing international distribution.

With so many Australian dramas mining classic IP – including remakes and spin-offs of Picnic at Hanging Rock, Romper Stomper, Mystery Road, Wolf Creek and Wake in Fright – Dead Lucky stands out as an original tale packed full of contemporary issues.

“I have worked with these writers before and we had that thing where we went, ‘It would be really good to do something else together,’” Griffiths says. “Well, that’s what I thought and thankfully they felt the same. I like to play on old tropes – who doesn’t like a buddy cop film? And then I loved that it’s a bit new Australia, old Australia, but it’s also within the context that this woman [Gibbs] has had to break the same perceptions, misconceptions and prejudices that this young guy will, in the same profession. It’s a great, interesting common ground.

“I also loved the idea of this girl in a mid-life crisis point. Her career is not where she thought it was and she’s at a critical moment. Does she hang in there until she gets to retirement, or does she find her mojo again and find a way to keep believing in what she’s doing? I found that great.”

Gibbs is also very angry. Grieving the loss of her partner, both personally and professionally, she is forced to attend anger-management sessions that only serve to fuel the fire within her. “For people who work on the front line, like ambulance drivers or first responders, they can go for years and then, one day, something sticks and they can’t move on,” Griffith says. “I guess it’s that whole PTSD thing where it’s so trite to be sent to a counsellor who has no idea what’s required to do those jobs. The fact is you can’t get all internal and ‘snowflakey’ because you’ve got to go back out into the war zone. And yet, if you don’t do the interior work and acknowledge you have experienced trauma, you will get to a point where that work is no longer possible.

“But she’s also angry because the guy she needs to catch is out there. At that point, it’s her motivator, so to reduce your anger would be demotivating. From the cops I talk to, they have open cases where they know who’s out there and justice hasn’t been served. Anger is a motivator.”

With so many TV serial killers on the loose, it’s also notable that the murderer in Dead Lucky has no motivation or back story. Put simply, he is a senseless maniac with no apparent reason for his crimes. “We thought it was interesting following not the arch serial killers of The Bridge or the noir shows but the ordinary drugged-up psychopath who just ruins so many lives with no masterplan, just his random acts of inhumane violence,” Griffiths explains. The showrunners learned from police that such criminals “impact on society much more than these clever serial killers we’ve all been following,” she adds.

Caesar previously directed Griffiths in 1993 TV movie The Feds, about the police hunt for a couple suspected of fraud. She describes him as a “great stylist and a real Aussie bloke, who has lovely insight and compassion yet he’s very ballsy.” The director oversaw two weeks of rehearsals for Dead Lucky, during which Griffiths was put through cop training, while she and her on-screen partner An spent time together to build up their ‘buddy’ relationship.

“My very first job with this director was also as a cop,” she says. “I’m not a natural street cop but the detective stuff, as I’ve become a more mature actor, felt much more right.”

Griffiths also praises the collaborative nature of making Dead Lucky, revealing that the creators brought her into the fold a year before shooting. “They wanted my input at that point,” she says. “It wasn’t huge but I kept trying to nail the thesis of the show, and that’s where we got to this female mid-life crisis, which is not explored very much. Often it’s the man at the middle of his career and his drinking.”

Drama characters are now more layered and complex than ever, but it was Griffiths’ experience starring in HBO’s Six Feet Under that opened her eyes to the possibilities television offers.

“In the early days of quality premium cable, it was really illuminating to discover the joy of finding layers and layers, and to do that over several seasons was a privilege I never expected,” she explains. “The two casts that I did five years on [Six Feet Under and ABC drama Brothers & Sisters], coming back for the next season was so wonderful because you start with fresh storylines and fresh momentum but your relationships are much deeper. I’m loving that on Game of Thrones and The Crown and Broadchurch. There’s a certain comfort that comes over time, which is really great. We were just hitting that at the end of episode four [of Dead Lucky].”

Griffiths is also stepping up behind the camera. Having directed three episodes of Nowhere Boy season two, she is now in pre-production for Ride Like a Girl, a movie about Michelle Payne, the first female jockey to win the Melbourne Cup.

“I love the problem-solving and I love telling stories,” the actor says about her approach to directing. “I’ve always seen myself as a storyteller as much as an actor and I think we’re in a really exciting moment for the stories that are being told and the perspectives they’re being told from. And I love working with the crafts people in my industry and harnessing their collective brilliance.

“I don’t come from an auteur place; I’m very much about listening to the best idea in the room and I love problem-solving in real time. I’m not one of those directors who just gathers this stuff and discusses it in the editing room and can’t wait for the shoot to be over. I like being out there in the mud and dealing with the advancing Russian army. One hour at a time at the moment.”

But for a certain generation, Griffiths is still best known for starring as Rhonda in comedy-drama movie Muriel’s Wedding. The 1994 film maintains a cult following, with Muriel’s Wedding: The Musical opening in Sydney in November 2017.

“I couldn’t stop crying the whole way through the show,” she reveals of watching the musical. “It was kind of embarrassing because the audience kept turning to watch me crying. It was very emotional but it’s a fantastic show, it’s sold out down here. I’m hoping that, like Priscilla [Queen of the Desert, the hit musical], it will go global and I think it delivers everything people are going to want from it.”

Now 24 years on from its original release, Muriel’s Wedding still stands out as a story about female friendship, principally between Rhonda and Toni Collette’s Muriel, who dreams of being a bride. Griffiths credits its success to creator and director PJ Hogan, who chose not to view women through the male gaze.

“It was so much about women finding themselves and friendship being at the core, rather than romantic love,” she notes. “A bit like My Best Friend’s Wedding, which he went on to make, it shifted the object within that romantic comedy genre. When coming-of-age films really capture the torture and the joie de vivre, the audience can relate to that moment and carry the film with them as a personal reference.”

For Griffiths, stories about female relationships are sorely lacking, except for recent Oscar nomineee Lady Bird, written and directed by Greta Gerwig, which focuses on the relationship between a mother and daughter.

“It truly is a woman’s most significant relationship and it can ruin you and it can make you, and to see that explored on film is incredibly rare,” Griffiths adds. “Whereas father-son relationships have been seen since The Godfather because men know how important that relationship is for men. It’s only now women are making films that they think, ‘Well this is the most interesting relationship to make a film about.’”