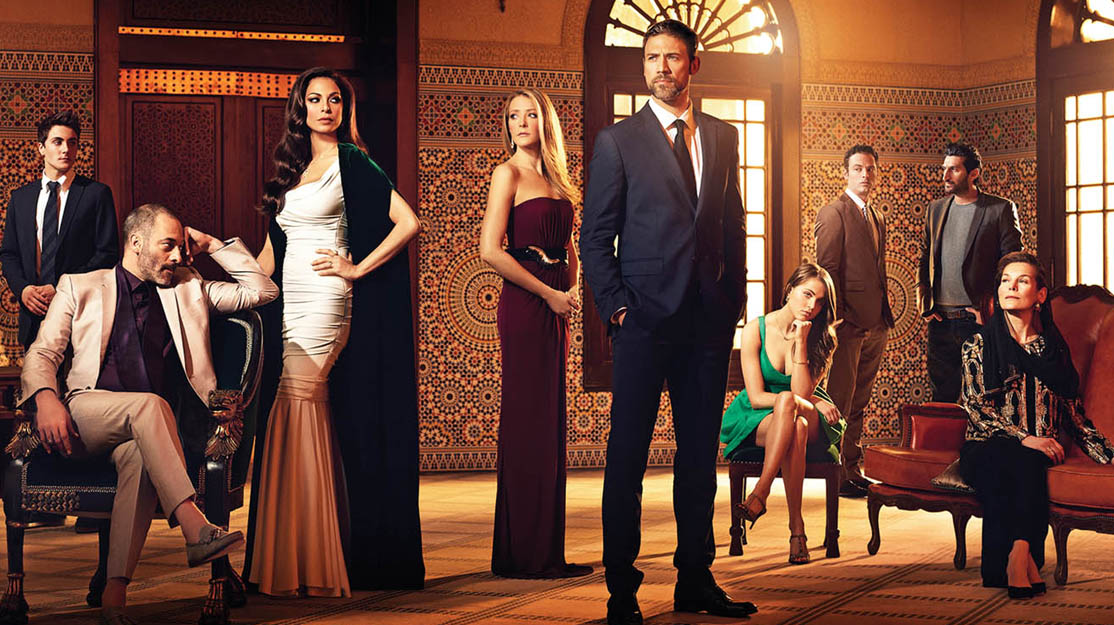 Having presided over eight seasons of 24, Howard Gordon moved to Homeland and then Tyrant as war blazed across the Middle East. As the second season of the latter is prepped, Gordon talks to DQ about the pressure of creating ‘real world’ drama.

When Jack Bauer disappeared at the end of 24’s eighth series back in 2010, it was as limp an anti-climax as TV history has delivered. Barely a handful of viewers watched him go, which would have seemed staggering a couple of years before.

After debuting in 2001 as an aesthetically daring, beautifully constructed and genre redefining instant classic, the show gradually shifted from mere TV series to an avatar for an entire political belief system. There are few TV characters as profoundly controversial as Jack Bauer – perhaps Alf Garnet, although Bauer was better dressed… maybe Ali G or Borat… but even these would struggle to have their resurrection greeted with headlines as furious as: “Why We Don’t Need More 24 – The Torture Happy Jack Bauer Should Stay Retired.”

Howard Gordon – although not the show’s creator – was effectively showrunner for most of Jack’s life. Once the CTU closed down, his colleague Joel Surnow stepped back a little, pushing out The Kennedys and working on the 24 movie. Gordon – not so much. His next project was Homeland, if possible a little more timely, a little more controversial and a little more unsettling than 24. Based on Israeli series Hatufim – by Gideon Raft – the first two series toyed with extreme versions of Stockholm
Syndrome as former US hostage Nicholas Brody – played by Damian Lewis – came home from captivity.

These days, of course, US hostage executions fill primetime news as the forces of the Islamic State sweep back and forth across Iraq and Syria. With an eye that’s becoming literally uncanny, Howard Gordon is there again – his new show Tyrant deals with the death of a middle eastern dictator so closely modeled on Saddam or Assad that his national flag in the pilot looks a lot like the Iraqi flag.

“Well it’s not literally the Iraqi flag, it’s a variation,” Howard explains carefully. “In fact you’ll see between the pilot and the subsequent episodes that we revised the flag, to underscore the difference. People were trying to second guess, is this Syria? Is this Iraq? Setting a show in the real Middle East but in a fictional country is a unique challenge because now, for better or worse, we’re all fairly familiar with the map. So doing that without making it something like Moon over Parador or something limply satirical is difficult. A fictional country is almost by definition a comic creation.”

And Tyrant is definitely not a comedy. The show follows Bassam Al-Fayeed, the youngest son of a brutal dictator. Bassam has been living in the US and working as a doctor for almost 20 years – an echo of colonel Muammar Gaddafi’s son Safi who studied at the LSE in London. Bassam heads home for a family wedding and stumbles into a terrifying political crisis when his father is killed in the middle of an Arab Spring revolution. Bassam is tempted to flee – but fears his brutal and unstable older brother Jamal will unleash a bloody conflict so stays to help soothe him into a peaceful transition of power. Which, needless to say, goes badly.

“It’s really the hubris of American Colonialism,” Gordon explains. “And Barry is the personification of that world. Let’s just say The Godfather is probably the most obvious influence here. Barry stays behind to help his brother run the family business and then comes to realise that his brother’s not capable of doing that. Betraying his brother is the only possible next step, so that becomes the trajectory of the show.”

It’s the second collaboration between Howard and Homeland creator Raff. Gordon was filming the second series of Homeland in Israel when Raff approached him with the idea. “It was intriguing because I’m obviously fascinated by this part of the world,” he explains. “History is being made in the Middle East, and its changing by the day. So it felt like a way to open a door on that side of the world that wasn’t a terrorist based thriller but more of a family saga and a political drama.”

Given that point – that history is being written – it seems surprising so few scriptwriters are following him in to the region. “I guess it’s for the same reason the US government wants so desperately to stay away,” he gives a short laugh. “Ask President Obama right now – it’s a hornets nest. The ground is completely unstable. It is a thicket of competing tribal and religious and cultural rules standing between modernity and antiquity so it’s very challenging narratively to take such a complicated landscape. People certainly wouldn’t put a Muslim in the lead unless they were fighting terrorists.”

There may, of course, be other reasons. During one interview, Damian Lewis recalled how hair raising it could be shooting Homeland on the ground in Palestinian towns. Gordon laughs when that’s mentioned. “Take the challenges of shooting what’s halfway around the world with the time differences, language differences and the cultural differences then add things you can’t prepare for,” he grins. “We were in a Palestinian town called Bartar filming on this very long street that we hadn’t locked down. We thought the shops and street vendors had been paid to make up for whatever lost income the shooting had caused, but apparently they weren’t. So fights broke out in the street and then it swelled and turned toward the crew and we did a quick retreat, with Clare Danes jumping into a van as we left. I think somebody may have started the rumour that we were with the CIA…”

And yet he’s back – shooting Tyrant initially in Israel before the current conflict forced them over to Istanbul. “It’s hard to get the colours and the architecture and the faces anywhere else, and that’s what makes it feel real,” he explains. “We don’t want to make it feel like a back lot. But yes just when you think it couldn’t get any more difficult it finds a way to get more difficult.”

This interest in current affairs linked drama hasn’t always defined him. His CV shows a career swerve so sharp there are practically tyre marks on the paper – born in Queens, New York, he moved to LA to write for television and cut his teeth on private eye drama Spenser: For Hire.

From there, he focused on fantasy – Beauty and the Beast, The X Files and the Buffy spin-off Angel. So why did he switch from the surreal to the very real? “Sometimes the turns aren’t necessarily by design, but by circumstance,” he says wryly. “I had written a pilot for Fox called Ball and Chain, a husband-and-wife superhero show based on a comic book. Joel Surnow and Robert Cochran created 24 and that wound up getting on the air instead of my comic book. I was asked to go on the show with Joe and Bob… and this was all before 9/11 so we were shooting a show which, I suspect, would have been a good show but which suddenly became so culturally resonant because of 9/11. Certainly 9/11 influenced what we did creatively with the show from that moment.”

For the next decade, effectively, he channelled the evolving story of US involvement in Iraq and Afghanistan into touchstones for the series – and they also became the lens through which the series was viewed. Gordon is more or less a liberal and his co-writer Joel Surnow is a noted Republican. As 24 became a cultural totem it was fought over as fiercely as the notion of what America should be. Storylines that seemed to condone torture came in for heavy criticism and Gordon’s liberal shoulders had to carry much of that weight.

“People presumed things that weren’t necessarily true,” he insists. “Joel’s politics and my politics really seldom became narrative markers. There might be a scene or two Joel wrote where someone from the American Civil Liberators Union might have felt they were treated unkindly. Yes, we’d argue behind the scenes. On the writing staff there were people to the right of Joel and people to the left of me and we’d spend hours arguing politics but I can’t say the show ever descended to some kind of propaganda.”

All the same, the accusations almost sent him packing. Jack Bauer came to represent something unsavoury and he found it exhausting to keep pouring creative love into the show. After Homeland he thought he was at the end of his rope on that sort of material and briefly returned to fantasy with Awake, a brutally short-lived, high-concept cop show for NBC about an LAPD officer existing in two parallel realities after a car crash. In one, his wife survives; in the other, his son lives, and he uses details from each to solve crimes in both. The show was cancelled in May 2012 after 11 episodes.

“Awake was my own personal hubris,” he admits. “I knew that it was a very challenging concept. In hindsight it may have been better served as a cable show. I think it was a gimmick that rendered both worlds inert rather than made both worlds feel more engaged.”

You also get the sense that he’s passed through the looking glass and would struggle to immerse himself as thoroughly in an entirely unreal fictional world. Right now he’s considering season two of Tyrant – which hasn’t been picked up yet, after a mixed reception in the US over the summer – but he’s doodling some ideas and how can he not look at ISIS?

“It’s an incredible sequence of events and if we do go back we can’t ignore them,” he explains. “The trick is of course to find a way to take these real world events and weave them into your story and in a way it’s not reckless I would say. That’s the challenge.”

That it’s tricky doesn’t need underlining. At the height of 24’s popularity, Joel Surnow tried to capitalise on his reputation for current events TV by launching a right-wing version of the Daily Show, the ½ Hour News Hour, for Fox News. When it failed – and failed quickly – there was talk of Hollywood’s liberal bias.

“I think Hollywood is a more liberally inclined culture,” Gordon says carefully. “Which isn’t hard when you look at where people come from. But I think artists everywhere – in all countries – tend to be liberal. They’re the ones who question authority, are probably temperamentally slightly outcast themselves and attach themselves to the underdogs and the underclass. You could say the same thing about people on Wall Street being conservative and wanting to conserve all the money that they’ve made.”

All the same, he’s still friends with Joel. He executive produced Jack Bauer’s recent resurrection in 24: Live Another Day although he wasn’t in the writers room. “Now that the dust has settled on 24 both of us recognise how much we learned from each other. It’s the most fun I’ve had in my career,” he gives a quiet smile. Which begs the question – if liberals and republicans can work together in the steam cooker of serial TV drama is there anything we can learn that would help the embattled US Congress collaborate somehow?

He pauses, thoughtfully. “Well, I don’t know about that,” he says in the end. “Things are getting so nasty in Washington. But I guess the stakes are real. At the end of the day we’re still just running a television show…”