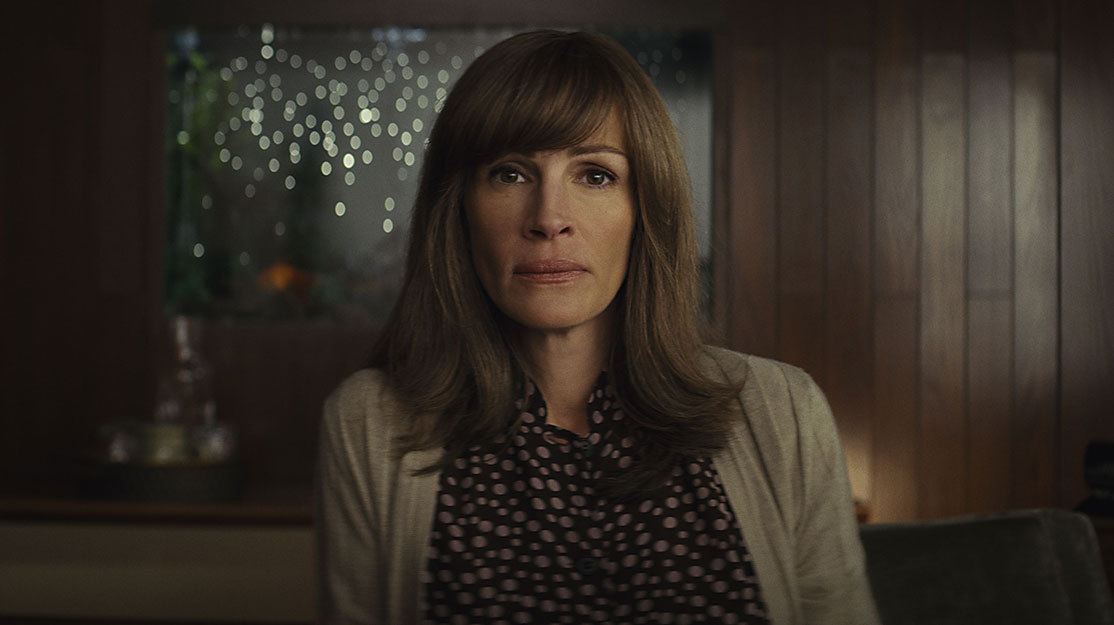 If the knowledge that Amazon Prime Video’s latest original drama comes from the creator of Mr Robot and is based on an award-winning podcast wasn’t already enough of a reason to tune in, add into the mix the fact it is also Oscar-winner Julia Roberts’ first foray into television and Homecoming becomes the latest must-watch series.

Described as a mind-bending psychological thriller, Roberts plays Heidi Bergman, a caseworker at the Homecoming Transitional Support Centre, which helps soldiers transition back into civilian life. It’s there that she meets Walter Cruz (Stephan James), a soldier eager to begin the next phase of his life, while overseeing Heidi and the facility is Colin Belfast (Bobby Cannavale), an ambitious company man with questionable motives.

Four years later, Heidi has started a new life, living with her mother (Sissy Spacek) and working as a small-town waitress, when a Department of Defense auditor (Shea Whigham) visits with questions about why she left the Homecoming facility. Heidi soon realises there’s a different story to the one she’s been telling herself.

The series is based on the podcast of the same name created by writers Eli Horowitz and Micah Bloomberg and is rolling out in more than 200 territories on Prime Video tomorrow. Mr Robot’s Sam Esmail is the director and executive producer and the cast includes Jeremy Allen White, Alex Karpovsky and Dermot Mulroney.

Esmail admits he is used to listening to non-fiction podcasts and documentary series, but fell in love with Homecoming’s radio play style. “It was scripted, it had actors and it was great. It was like this throwback to an old-school thriller that was steeped in characters, as opposed to the action-thrillers of nowadays,” he says, speaking at Amazon’s Prime Video Presents event in London. “I binged it in one sitting and then I binged it again and I thought there was something here to really do something special as a TV show.”

But adapting an audio drama into a television drama meant Esmail had to find a reason why it now demanded to be a visual experience too. He explains that while the podcast looks back on events in the past, the series is able to be with the characters in those moments, where “the suspense and the tension could be really amped up.” He also found inspiration in the visual dynamics of “old-school throwback thrillers” that he loved to watch growing up, citing “the old masters” such as Alfred Hitchcock, Brian De Palma and Alan Pakula, who Roberts worked with on 1993’s The Pelican Brief. “The [visual] language was already there, so it was really exciting,” he says.

Similarly, Roberts liked the way the podcast harked back to a time when families would sit and listen to a story together, whether it was a book being read out loud or a radio play, forcing the listeners to use their imagination to build the world being described to them.

“I think that’s where inspiration as artists starts – imagining what it would look like and what it would sound like if you were doing it,” the actor says. “So I was really attracted to that. When Sam called me, we seem like different people, we’re kind of the same but my hair is much longer! Instantly we were like 20-year friends and so it seemed really clear that this was going to be a match and it was going to work bringing it to television, because TV is not for the faint of heart, for sure.

In Homecoming, Roberts says she plays two characters – two versions of Heidi in different time periods that are signified by different frame ratios – which she says was a “great, fun challenge” for her. “There was some organisational stuff that I’m not used to,” she says of jumping between the two during filming. “Sam kept me on track with a map of, ‘Here’s what we know has happened and here’s what we don’t know has happened and here’s what we think might have happen later.’ So there was a little bit of that.”

Both Esmail and Roberts praise their fellow cast and crew, with both picking out production designer Anastasia White in particular for the way she physically built the world of Homecoming. She had previously worked with Esmail on Mr Robot.

“The one thing I wanted was to build the set. I didn’t want to go out and find the location because of the camera movements. I really wanted as much control as possible,” Esmail says. “I think we shot like 70% of the show on that set, so it was really critical. We sat down and talked about it and, honestly, it was one of those things where I told her the tone, the theme of what we’re going for in the story and she took it and ran with it.”

Roberts recalls one rehearsal where, surrounded by plywood, tape and chalk marks on the floor, she had to pretend to walk down some stairs and through a room that hadn’t been built yet. “I thought, ‘How will this ever work in a week?’ And then we walked into this facility. It was breathtaking, truly.”

About her co-stars, Roberts says James is “just terrific. The highest compliment I can pay as a person is he’s always on time and the highest compliment I can pay as an actor is he is incredibly prepared. When you are those things, that leaves space to be creative and have fun, and that’s what Sam really encouraged and nourished in all of us – to fill the space the way we felt confident about. The space that he made was so unique and present, we felt like we lived in this special land – Sam Land.”

The actor, whose storied film career includes Pretty Woman, Erin Brockovich and Notting Hill, reveals she prepared for her role as Heidi with numerous wig fittings and trying to understand the character’s strength and vulnerability. “I absolutely adored the relationship with Heidi and her mother, maybe because I’m in love with Sissy Spacek,” she continues. “I have known her since I was 13 years old so she might as well be my mother! But nothing makes it easy to act with Sissy Spacek. On the first day, everyone was like, ‘It’s Sissy!’ ‘Yeah I know, she’s right next to me, keep your voice down.’”

“We were all having a moment,” jokes Esmail, adding that he didn’t hire a composer for the series because he wanted to keep the music authentic to the visual style. “All the music is from the old classics and a lot is Pino Donaggio, Brian De Palma’s composer. We used one of the big scores from Carrie in the show, which Sissy’s also in. It’s very meta.”

Homecoming premiered at the Toronto International Film Festival in September, when Roberts sat down to watch the first four episodes and discovered Whigham “steals” the show. “I realise if I hadn’t been working so hard as an actor, I would have been paying a lot more attention as a producer and done something about that,” she jokes. “But since I didn’t, he’s so fantastic in this and it just speaks to the brilliance of Sam that he cast each part so perfectly, so specifically. Bobby is so terrific but Shea, this funny little investigator person, he just is magnificent. It makes the show such a fully realised universe of people. It’s incredible.”

With her first role on television, Roberts says she can’t say she’s worked in the medium, thanks to Esmail’s efforts to shoot the 10-episode series as a movie. “A lot of our crew I know from movies and the way we filmed it, we didn’t film it one episode at a time, we filmed it in blocks and in locations, so it was very much like a movie,” she adds.

Esmail is now working on the fourth and final season of Mr Robot, which is due to debut in 2019, but he hints that a second season of Homecoming is also in the works. Following in the footsteps of dozens of Hollywood stars now regularly appearing on television, perhaps Roberts will now make her home on the small screen too.