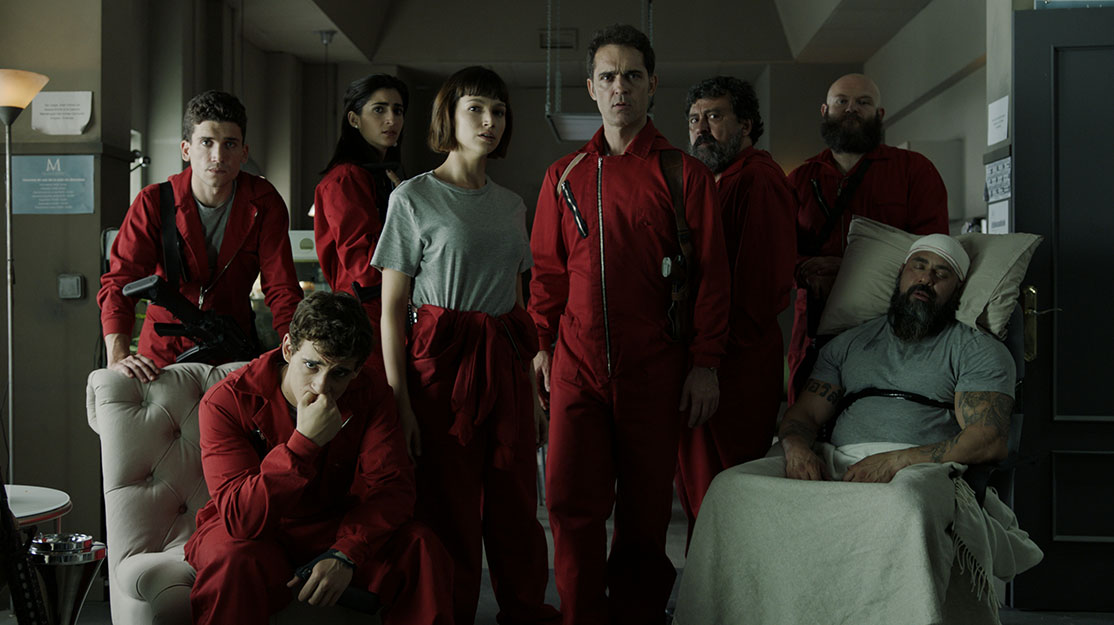 Right on the Money

When Netflix published its earnings statement for the first quarter of 2018, there were plenty of headline figures. Revenue growth of 43% year-on-year, the fastest in its streaming history; more than seven million new subscribers worldwide; and confirmation of a US$8bn content budget for the year ahead that would be spent on a dizzying array of series, films, unscripted series, documentaries and comedy specials.

The same period also saw the launch of new series including The End of the F****** World and Altered Carbon, plus the return of shows such as Marvel’s Jessica Jones, Santa Clarita Diet and A Series of Unfortunate Events.

And while Netflix continues to expand its production line of international originals, among them Brazil’s O Mecanismo (The Mechanism) from Narcos creator José Padilha, the report also noted, with little fanfare, that Spanish drama El Casa de Papel (Money Heist) had become the most watched non-English-language series on Netflix. Quite a feat when you consider Narcos, Babylon Berlin, Fauda, Suburra, Generation War and Rita are among the slew of international shows available on the streaming platform.

The series, one story split across two seasons (or ‘parts’), first aired on Spain’s Antena 3 in May 2017. It tells the story of the mysterious Professor, played by Álvaro Morte, who assembles a crack team of criminals with one goal – to break into the Royal Mint of Spain in Madrid and print €2.4bn (US$2.8bn).

Creator Alex Pina says he was keen to bring the heist genre, a constant in the big-screen world, to television but admits getting the project off the ground was a bumpy road.

“The TV channel wasn’t convinced,” he says. “And we were producing so many chapters with only one heist, which takes place in the 15th minute of the first chapter. There were 1,000 minutes of fiction, 137 hours of action, and we wanted to make it very fluid, so the only solution was to use flashbacks.

“With all these flashbacks, we wanted to tell the story and make it authentic, with lots of action and events one after the other, twists and turns. This is something that made it unique and such an addictive TV show.”

Another problem was that the heist genre is largely aimed at male cinema-goers – so how did the writers look to draw female viewers to the series? The answer lay in telling the story largely from a female perspective.

“Last year we saw an explosion of female narratives,” says Esther Martinez Lobato, screenwriter and executive producer. “More TV shows are having female main characters. The most difficult decision we had to make was to find the perfect protagonist, which we found in Tokyo [played by Úrsula Corberó]. She’s a very important character. She’s a loser at the beginning and had nothing to lose, and then she meets the Professor. That’s how we wanted to approach the male presence. But the female characters go beyond Tokyo.”

The other most notable female characters are Raquel (Itziar Ituño), the police officer who leads the investigation into the heist and unwittingly becomes close to the Professor; and Monica, an employee at the Royal Mint who is initially held among the hostages but becomes involved with one of her captors, Denver (Jaime Lorente).

“We have the perfect heist, that’s the motive of the series, but it’s something very masculine so we wanted to provide feminine perspective,” Pina says. “Raquel’s story is very powerful, very romantic. She controls the heist from the police point of view and she deals with gender violence in her life [following an abusive relationship with her ex-husband]. On the other hand, we have Tokyo. We also have Monica. She has a lot of male-related problems and all of this takes place within the perfect heist. There are four main female characters [including fellow gang member Nairobi] and it works very well. We also intended to enhance the genre with some hybrids. One of most powerful romantic stories could happen between the Professor and the inspector, the mastermind of the police operation. It was something we wanted to exploit and it has worked.”

Those who struggle to put pen to paper should take heart when Lobato admits it took a month to write the first five lines of the series. The writer, who was already working with Pina on Spanish prison drama Vis a Vis (Locked Up), says El Casa de Papel was “a leap into the unknown.”

“We didn’t know what we were embarking on,” she says. “We started to work on a small thing, we ended it, the actors went home. All the sets were destroyed. Then Netflix picked up the series and, starting from a very small TV show, we saw how it was growing exponentially. Everything we did, we did with love. We were just trying to make something entertaining and good to watch.”

Throughout its 15 chapters (re-edited into 22 on Netflix), the series is notable for its fast-paced twists and turns as it juggles competing – and rising – tensions inside and outside the Royal Mint, where the robbers and the police both face a race against time to achieve their aims. Pina says his ambition was to create a “frantic” TV show, noting: “We didn’t want it to get boring, so we wanted to give reasons for the audience to stay with us and keep watching the show. That’s why every five or 10 minutes, lots of powerful things happen. We wanted to open up the series and the plot, even though it was developing in a closed space.”

More important than the plot, however, is the band of morally ambiguous characters – all given city codenames, like Tokyo – at the centre of the story. While on the surface this appears to be a story of good versus evil, pitting the police against a group of career criminals, characters on both sides of the fence are not as you initially perceive them to be.

“All the characters, they are anti-heroes, antagonists. And as the plot develops, the audience realises they are very relatable,” says Pina. “That’s how the audience becomes addicted to the characters, because of the way they are developed. There’s no good or bad; it’s up to the audience to decide. Taking the audience from one side of the moral spectrum to another also marks the success of the series.”

It is arguably Berlin (Pedro Alonso), in particular, who changes the most, shifting from the crazed ringleader inside the Royal Mint and the Professor’s right-hand man to become one of the series’ most loved characters.

“People ask me how can you create a character who is so likeable but who started being so oppressing,” Lobato says, noting the character’s initial treatment of the hostages. “The audience can understand depth of character because it develops over a number of episodes. We’re trying to cover the whole moral spectrum and turn good people evil and vice versa. Tokyo starts as an anti-hero and becomes a lovely girl. Monica starts as a secretary and by the end she has a gun in her hand. That’s what makes the series so entertaining.”

It’s an approach that is employed for every character in the series, with shades of light and dark applied to each so they are both relatable and immoral at various moments of the series, from the scheming yet charismatic Professor and the strong yet vulnerable Raquel to each member of the gang holed up inside the Royal Mint.

“We spent a lot of time to find how Nairobi [Alba Flores] speaks and Berlin walks – all those details that construct the identity and DNA of the show,” Pina says. “They’re multi-dimensional characters, they’re always changing and are complementary to one another. That’s what makes the audience stay with the characters and why we present them in another light. We provide a poetic dimension to allow them to develop throughout the plot. If we have a violent character, we want to add some tenderness.”

Lobato picks up: “One of the things we kept in mind when we started work every day was the audience. They are smart and are consuming more fiction. They are becoming experts. Before, we were asking ourselves if the audience was watching TV, but now the question has changed. They choose what to see, so that has affected our choices as well.”

The show’s two-part structure was born out of financial necessity, Pina reveals, admitting “we didn’t have a lot of money.” Production was split between shooting scenes featuring the Professor and the police with one unit and events inside the Royal Mint with another.

“That’s how it was viable,” Pina says. “It was created in five months. We started writing and each week we delivered the script. Production was a race against the clock.”

While seasons one and two make up one complete story – earning a Golden Nymph award for best drama TV series at the Monte Carlo Television Festival earlier this month – with a solid resolution to the events that have taken place during the series, Netflix has ordered a third season that will see the Professor develop new heists. It is set to air in 2019.

And when it comes to potential spin-offs, Pina says that’s for the streamer to discuss. “They’re very happy with it and believe it has lots of possibilities,” he says. “They believe that either Berlin or Tokyo can have their own universe, but I don’t have any more information. It could possibly work back in time; it could be a prequel.

“Berlin is going to appear in the third season,” Pina adds. “Berlin will have a big universe before the heist because he was already a professional robber. La Casa de Papel is the end of his story but we have lots to tell about him.”