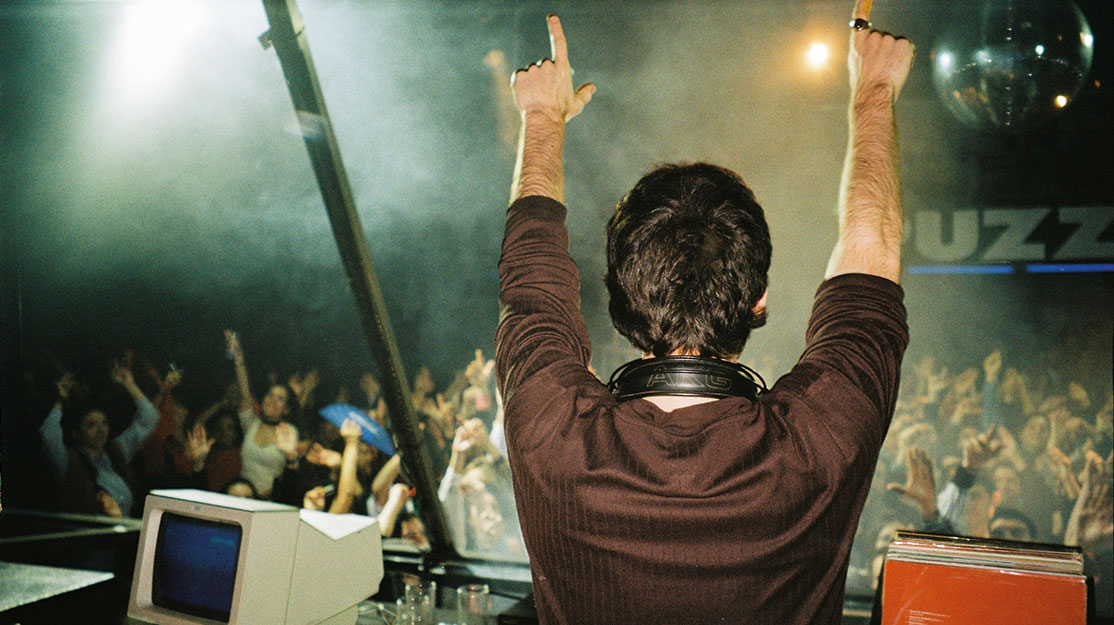 DQ visits Valencia to get the lowdown on Spanish drama series La Ruta (The Route), which portrays the personal journey of five friends in the middle of a cultural movement around techno music in the 1980s. By Irene Jiménez

Just a few miles away from the city of Valencia on Spain’s east coast, between rice fields and the beach, seven nightclubs changed the cultural landscape in the 1980s and the first half of the 90s. The so-called Destroy Route, also known as the Bacalao Route, will always be remembered for many young people embarking on three days of non-stop wild raves, drugs included. But beyond that, there was a cultural movement around techno music that AtresPlayer Premium original drama series La Ruta (The Route) has sought to reflect as realistically as possible.

The Route is the second commission for Caballo Films – the production company founded in 2010 by Spanish writers, directors and producers Rodrigo Sorogoyen, Eduardo Villanueva, Borja Soler and Alberto del Campo – following its acclaimed series Antidisturbios (Riot Police). For 18 weeks, from January to May this year, the drama was shot in several locations of the Comunidad Valenciana region, specifically in villages including Riba-Roja, Sagunto, Sueca, Benidorm and La Albufera, plus Valencia city.

The creative team did a huge amount of research ahead of filming, led by series creators Soler and Roberto Martín Maiztegui. The former, born in Valencia in 1983, decided to write a story about the Destroy Route after reading En Éxtasis (In Ecstasy), a book by journalist and professor Joan M Oleaque, who has been involved in the show as a production consultant.

“I thought I knew the movement, but reading this book made me realise how different things were compared with what the media published in the 90s,” says Soler. “It wasn’t all about and around the drugs. Not at all. Many trends relating to music, fashion and graphic design were born there. Techno music and house music may be remembered the most, but The Stone Roses performed a concert along the Destroy Route in 1989. The sporty, flashy clothes are iconic but, before that, boys wore frock coats and pointed shoes. Before the European trend of clubbing there was the Destroy Route.”

The premise sounds perfect for a local story with international ambitions. In fact, tagline “30 kilometres. 12 years. 7 clubs. 5 friends. Let no one stop dancing” could be the summary of the eight-part show. Told backwards, the story portrays the personal journey of a group of friends from Valencia, starting from their farewell in 1993 and going back to the day they entered the club Barraca for the first time in 1981, when both they and the party scene still had their innocence. The journey changes their lives forever, especially for one member of the group, who discovers he has a special gift as a DJ.

“We will see a story about friendship, as well as one between brothers, and we will see how these five characters, with very different roots and ambitions, build their own identity in the middle of a cultural event that happened in the countryside and not in the city,” says Soler. “The Route has got a nostalgic component; you could say it’s a generational series. Despite that, I’m sure the story will reach everyone, no matter their age, because, in the end, we’re telling a coming-of-age story about leaving puberty and entering adulthood.”

After the show was greenlit by Atresmedia, the writers’ room – comprising Soler, Maiztegui, Clara Botas and Silvia Herreros de Tejada – started working on the script in the middle of the pandemic. The directors were on board from the start. Belén Funes, a filmmaker who debuted in 2019 with a feature film, oversees episodes four and five; Carlos Marqués-Marcet, who has worked mainly on feature films, directs episodes six and seven; and co-creator Soler helms the first three episodes and the finale.

The five main characters are played by a group of young Spanish actors – Àlex Monner, Claudia Salas, Ricardo Gómez, Elisabet Casanovas and Guillem Barbosa – none of whom existed in the time period depicted in The Route. “We face this project with respect and a little bit of pressure because we know it was a very special time for many people,” says Salas.

“Being away from home and shooting this series for more than four months has made us connect on a personal level,” adds Casanovas.

The make-up, hairstyling and fashion of the period also inspired the actors, while the fact that each episode corresponds to two years in real time meant the art department was constantly working on new looks and sets. “I have never been so busy on a shoot. We have plenty of sessions in the fitting room, dancing lessons, a coach to learn the Valencian accent…,” says Gómez. Notably, the series, which is shot in Spanish, includes some dialogue in the specific language of the region, presenting a challenge for a cast of actors who mostly come from Catalonia, further in the north of Spain.

In order to represent the story as realistically as possible, the production was granted rights to real brands relating to nightclubs including ACTV, NOD, Spook, Espiral, Chocolate, Barraca and Puzzle, some of which are still open today. “We shot in one of them and recreated the rest in other clubs that are abandoned, or in big spaces,” says Nacho Lavilla, who executive produces for Caballo Films alongside Eduardo Villanueva, while Montse García exec produces for Atresmedia.

“The story and the characters are fictional, but we compiled dozens of anecdotes and details from people who were there. I mean, we built a sign using neon lights, no LEDs; we replicated a DJ’s cabin that looked like a jail; we used a black light that was characteristic of the clubs. We also made replica MDMA pills with smiley faces like the ones that were distributed among the youngsters back then.” On top of all that, the production includes three original songs for each episode, which “was key to elevate the realism,” Lavilla adds.

Watching the series, viewers will witness the never-ending parties that took place in the parking lots of the clubs, including one particularly improbable occasion when an elephant showed up. “It actually happened. We didn’t tell the extras that the animal was coming, so the surprised faces are authentic,” says Lavilla. Paellas were also cooked on club rooftops at noon.

Despite the rare cold and rainy winter in Valencia, “we shot some scenes with 250 extras,” says Lavilla, who reveals that the sixth episode is his favourite. “Most of the action happens in the toilets of a club. Director Carlos Marqués-Marcet is known for long takes and he doesn’t rehearse, so he lets the actors go into the situation during the day, little by little.”

The Route has been shot with a Sony Venice camera, “because it is great for night scenes and doesn’t require much artificial light.” For episodes set in the 90s, a Angenieux Optimo Prime lens was chosen, being changed to a Leica R lens to portray the 80s. “The camera goes from quiet and steady close-ups to wider handheld shots,” Lavilla notes.

Conceived as a single-season series, The Route will premiere in late 2022 on Atresplayer Premium in Spain. The first footage of the show was unveiled during the Spanish showcase at the Series Mania Forum in Lille in March, while Atresmedia International Sales is handling worldwide rights. “This is a very special project that will exceed any expectations,” says José Antonio Antón, deputy director of content at Atresmedia.

Montse García, head of drama for Atresmedia, concurs, describing The Route as a “unique series.”

“As soon as I read the script, I could feel it was full of emotion,” she adds. “This time in Spain has never been portrayed on screen, and now is the perfect moment to do it.”