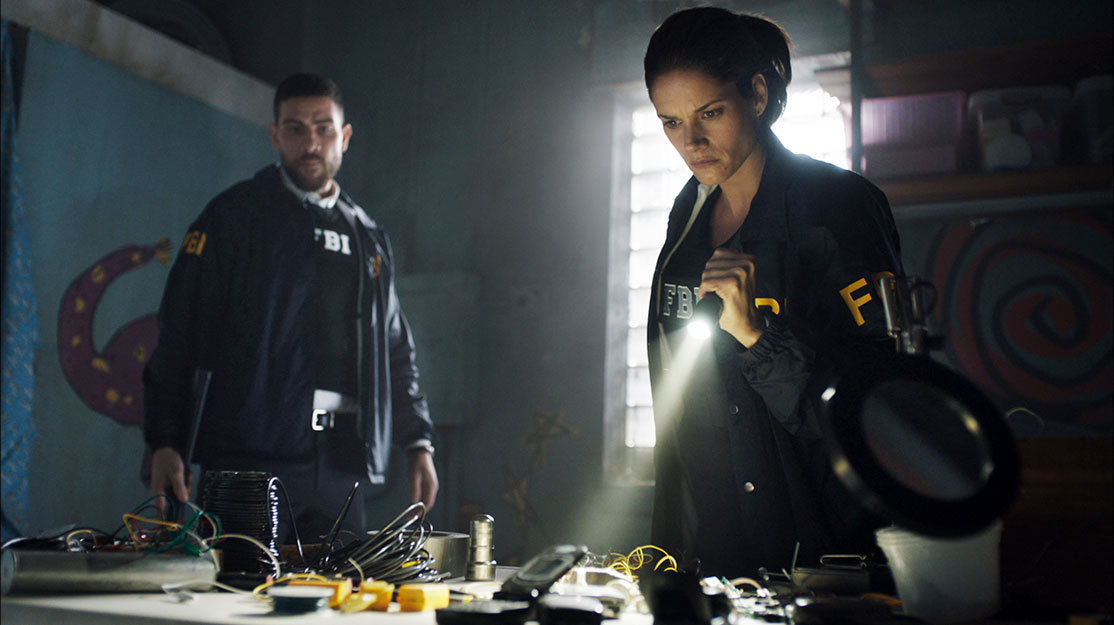 After six seasons starring in Canadian police drama Rookie Blue, Missy Peregrym was looking for a change of scenery – and uniform. Reading scripts, she found herself turning away from procedurals and even looking to try her hand at comedy.

But the lure of law enforcement – and working with Law & Order creator Dick Wolf – saw the actor return to the front line in the veteran producer’s latest series, FBI.

“Clearly I’m attracted to crime shows because I said yes,” she tells DQ at the Monte Carlo TV Festival, “and I care to represent the FBI. I take that as a great responsibility to do that properly, because we never hear about them unless something terrible has happened. They save us from so much stuff, things that I’d rather not know about. But I do know and I have to be positive about that. We’re dealing with really heavy content – sex trafficking, terrorist attacks, bomb threats, shootings – the threats are never just going to go away. So we need these people to protect us from this stuff happening, and I’m proud to represent that as closely as possible because I think it’s a really hard job.”

FBI, which launched on CBS last September and will return for a second season this autumn, is described as a fast-paced drama about the inner workings of the New York office of the Federal Bureau of Investigation. It is produced by Universal Television in association with CBS Television Studios and distributed by CBS Studios International.

Peregrym plays Special Agent Maggie Bell, who is deeply committed to the people she works with and protects. Her partner is Special Agent Omar Adom ‘OA’ Zidan, a graduate from West Point Military Academy who spent two years undercover for the Drug Enforcement Agency before being cherry-picked by the FBI. Working with a crack team of analysts and investigators, they face down all manner of threats, from terrorism and organised crime to counterintelligence.

Peregrym says it was a “big deal” to take on the role, noting the real-world parallels to the show’s stories and situations and the people she would be portraying.

“It’s not a sci-fi show. It’s not weird and made up. These things happen. That’s why I have to be careful even reading the news because I see things and I can’t stop thinking about them,” she explains. “Obviously, a death of a child is such an intense thing to start a show. It’s so heavy.

“As a cop, you don’t really know what you’re walking into. You get a call but you don’t know what you’re really going to meet. As an FBI agent, you’ve been doing so much research, you know exactly who you’re chasing. So to live with that information is a very different thing, to know that these [criminals] are out there.”

With the series filmed in New York, the first episode was particularly poignant as the opening scene sees a child die when a building is blown up in a cloud of dust, echoing the still-startling images of the September 11, 2001 terrorist attacks on the city.

“All I could think about was 9/11 or people around the world who are in devastating situations like this,” Peregrym says of filming the scene, “and this [filming a TV show] is this is nothing compared with the trauma other people have gone through. There was a woman who was there, she was really upset. She lost somebody on 9/11 and this brought up some things for her. I was like, ‘You can cry. It’s OK.’ I got her some tissues and I was like, ‘If you need a minute, no problem. That is so much more important than what this is right now.’

“That’s why I think there’s a huge responsibility that, when we do things like that, we do it correctly and we’re not glamorising it, because these experiences are too close to home for a lot of people. It’s good to talk about, but what’s the end narrative? For us, I hope it’s hope, and that we believe in these people looking after us.”

Peregrym says she is particularly proud to be playing a character that can inspire viewers, having previously received letters from women who joined the police after watching her in Rookie Blue.

“I just want young girls to be really proud of who they are because, no matter what, we’re gonna have to deal with the bullshit. Everybody deals with bullshit,” she says. “Everybody deals with insecurity. Everybody deals with rejection. It’s everybody’s own personal work to find their worth, and if I can help anybody do that then I’m so happy. I also hope I can be a teammate and inspire somebody else to be their best self and feel like they’re worth exactly what they are.”

Peregrym’s co-star Zaki landed the role of Zidan at a time when he had less than US$200 in his bank account and was looking at taking real-estate classes to help him get a job that could supplement his acting career. Until that point, he had scored recurring parts in action series 24: Legacy, Six and Valor, but FBI represents the actor’s breakout role.

The show, he says, takes Wolf’s tried and tested case-of-the-week format but sets it within an organisation that takes a path with which viewers are less familiar.

“It’s just really exciting to see what goes on behind that veil,” he says of opening up the inner workings of the FBI. “We get to bring that to light. It’s nice and important to give these people some representation – and hopefully we get to represent them in a positive light. We get to see why these people are superheroes in the real world and they sacrifice what they sacrifice – family time and relationships and everything. Our job is to bring that to the people.”

The actor admits some of the storylines used in the series are “terrifying” because they are based on or inspired by real-life incidents. But he also takes pride in the fact that people can see an Egyptian American leading a US network primetime drama.

“It’s just been crazy to be able to have a kid see himself in a hero on a TV show, and think, ‘Oh, I can do that. I can be that,’” he adds. “It’s kind of like when Black Panther came out and how African Americans finally had a superhero they could become, because otherwise you had to be the black Superman or the black Batman. With that sort of shift in the representation narrative that’s happening in today’s world, it’s an honour to be at the forefront of it and I’m really excited about being a part of it.”