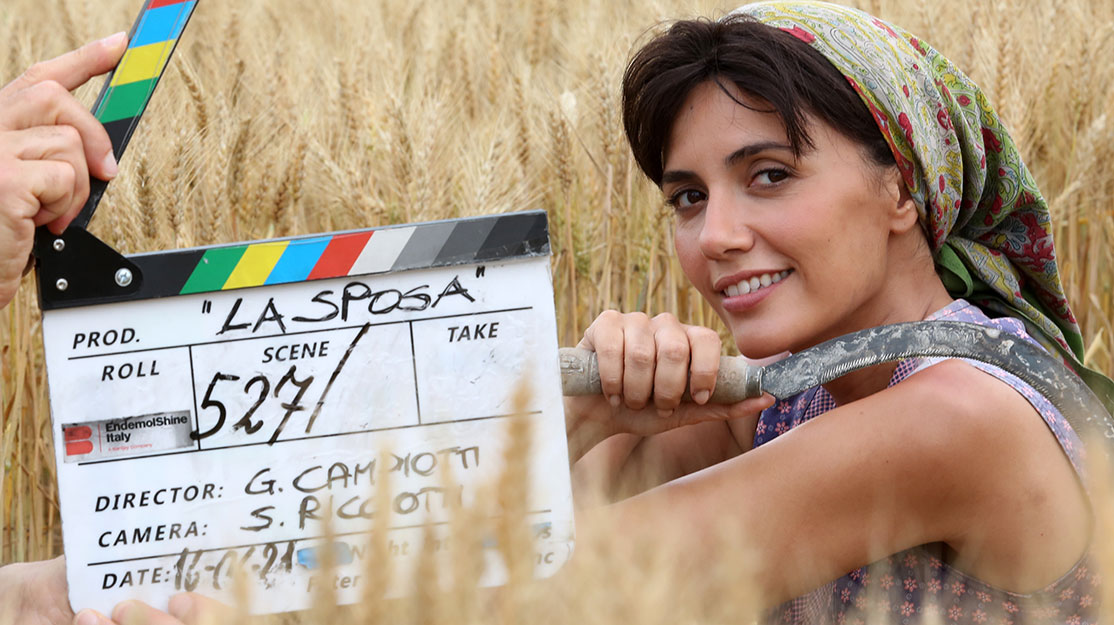 Star Serena Rossi and producer Benedetta Galbiati tell DQ about the real phenomenon at the heart of Italian drama La Sposa (The Bride), which centres on a woman thrown into marriage and motherhood in 1960s Italy.

Set in the late 1960s, Italian drama La Sposa (The Bride) tackles themes of redemption and liberation in a story of a young woman who finds her new husband is traumatised by his previous marriage.

The six-part series stars Serena Rossi (Ammore e Malavita) as Maria, who marries Italo (Giorgio Marchesi) by proxy, a widespread practice in Italy during a period that saw women from the south married to landowners in the north. Maria must adjust to her new rural life as a stepmother while feeling the disdain of Italo, who is still struggling after the disappearance of his first wife.

Despite these challenges, Maria’s unwavering resilience and positivity see her through – until the arrival of her ex-boyfriend threatens to change everything.

Here, Rossi and Endemol Shine Italy scripted head Benedetta Galbiati tell DQ how the series delves into Italy’s recent history and discuss the unremittingly positive message at the heart of the story.

Benedetta, what are the origins of the project?
Galbiati: We wanted to create a story with a strong female lead that also explores Italy’s recent history, possibly one that has never been tackled in a TV series. The aim was to produce a story from the past that corresponds with the present, and the phenomenon of proxy marriages in the 1960s seemed perfect to bring these elements together. The memory of these kinds of marriages is still alive in some families but they are not widely known and not widely talked about, except for Luigi Zampa’s 1971 film Bello, onesto, emigrato Australia sposerebbe compaesana illibata, which was a comedic take on the phenomenon.

Why were you interested in this story?
Galbiati: I was interested in the story because of the strength of its protagonist: a brave, bright woman who accepts a forced marriage to save her family from poverty. You immediately bond with a character like that.

How does the show portray its themes of redemption and liberation?
Galbiati: The series shows how having strong morals, resilience and the desire to see the best within others will always make your life blossom, even in tough situations. Maria emancipates herself and the people around her simply by showing and putting into practice these three transformative skills.

How does the story play out against changes in Italian society during the time?
Galbiati: La Sposa depicts the economic and cultural background of Italy in the late 1960s. Less than 20 years since the end of the Second World War, industry was booming in the north of the country, which led to more and more people moving from the south and from the countryside to cities to work in factories and improve their living conditions.
Though the majority of the population was still living rurally, industrialisation was creating discord between traditional values and thirst for progress. Maria represents the conjunction of these two opposite drives. She evolves and gains respect and rights as a wife and as a working woman. This is achieved by the fact she always remains faithful to herself and to her values, which are the root of her tenacity, her strength and her selfless love.

How was La Sposa developed with writer Valia Santella?
Galbiati: Valia is a gifted writer with extraordinary sensitivity. From the beginning of the development process, we had long talks about how to maximise the power of Maria’s character and her ability to gain the sympathy of the public. The answer was to never turn her into a victim, and to develop the story in the most realistic way possible given the proxy marriage premise.
The starting point of her sacrifice could have easily led to a story of suffering and violence told from the point of view of a martyr. With Valia, we proudly chose to go in the opposite direction. Maria is always in charge of her own destiny. She faces adverse circumstances, never gives up and always finds the positive in any situation. She is a light bearer who brightens every situation.

Why was this a show that Rai wanted to back?
Galbiati: Rai supported the project for its ability to shed light on a little-known aspect of Italian history, and for the values and vibrant portrayal of a generation linked to this story. It’s the story of our grandmothers and grandfathers – a perfect match for Rai Uno’s broad audience.

Serena, how did you join La Sposa?
Rossi: I loved Maria and her story right away. I couldn’t stop reading the script, so although I had a very busy work schedule, I immediately said yes to the role.

What was the appeal of the series and playing Maria?
Rossi: The series makes you dream but also reflect, as it tells an exciting story about people at the centre of a social and cultural debate. Maria moves to the north of Italy, where she is initially marginalised because she is a woman from the south. It is a story of redemption and female emancipation, and captures the true meaning of sisterhood with an incredible woman who does not give up in the face of adversity.

How would you describe Maria?
Rossi: Maria is wonderful and I love her determination and great strength. I’m empowered by women who never give up, and I hope I possess some of her qualities.

How does she adjust to married life with Italo and becoming a stepmother?
Rossi: She accepts everything with a positive attitude, even though she’s had to sacrifice so much. At the beginning, she agrees to marry a man she doesn’t know to help her family escape poverty. But with time and a lot of strength, she builds a new family with Italo and little Paolino [Maria’s stepson]. It is journey of love that somehow becomes redeeming.

What can you tell us about her journey through the six-part series?
Rossi: Maria’s journey allows us to discover the world of our grandparents. We initially see her as she gives up everything for her family, before following her journey of acceptance and her immersion into life in the countryside. During the filming process, I spent months living rurally, and I must say it was very beautiful.

How did you prepare for the role?
Rossi: I researched first-hand accounts of those who had married by proxy to have a clear idea of the context and the historical period, and then I used my memories of my grandparents to slightly revive the history of their generation.

What challenges did you face getting into character?
Rossi: One above all? I learned to milk a cow because I wanted to be Maria, to feel what she was feeling in that moment. For the same reason, one night I jumped into a river that had a strong current!

What was the atmosphere like on set?
Rossi: The set was wonderful. The other actors and crew worked very hard for weeks on end, but it was an incredible experience. Everyone understood that we were lucky to work on a set despite the difficulties caused by the pandemic.

What was it like working with director Giacomo Campiotti?
Rossi: Giacomo is a great director. He sees everything and guides you through every moment while also letting you express yourself.

Benedetta, how did you recreate 1960s Italy when filming in Rome, Apulia and Piedmont?
Galbiati: We put great emphasis on attention to detail during the historical reconstruction, as we were aware of the evocative power of the locations. The 1960s are still fresh in the memories of many people, so the perceived authenticity of settings was crucial to build relatability.
We shot most of the internal scenes in Rome. The artistic challenge, from a set design perspective, was to evoke the transformative essence of those years, by blending iconic 60s objects with older furnishings and decorative elements.
We chose Apulia to recreate Maria’s southern seaside village because of its beautifully preserved coast and architecture. The set design work was made easier there, with just minimal adjustments to bring the 1960s to life.
Piedmont is where most northern rural scenes were shot. This location was fairly challenging because we needed to find original agricultural tools and machinery, not to mention the large number of farm animals required to make the characters’ rural life authentic.

What challenges did you face in development or production?
Galbiati: La Sposa is an ambitious, high-production-value project. During its development, we worked carefully to combine classic content with a modern narrative structure, as well as contemporary issues such as female empowerment and gender equality. From a production perspective, period dramas are usually more challenging than contemporary ones, and even more so if they are set in the countryside. For example, the story unfolds across winter, spring, summer and autumn, so we had to stage all the different types of harvesting and farm activities across the seasons.

How was the production affected by Covid-19?
Galbiati: Luckily, we filmed from April to July 2021 when the rate of infection was decreasing in Italy. We applied very strict Covid-19 protocols, with cast and crew tested at least twice a week, and we were fortunate that we had no disruptions to our filming schedule. We were less fortunate this autumn during the post-production, when several crew members fell sick or had to go into quarantine. But given the expertise of our production teams, we always felt in a good place to navigate any challenges that came our way, and we are incredibly proud of the show we delivered Rai Uno.

Why do you think viewers will be drawn to Maria’s story?
Rossi: Because it is a very emotional story that, although set in the past, speaks to the present and the future.

How is La Sposa an example of current Italian drama? Does it stand out in any way?
Galbiati: La Sposa contains some dramatic narrative elements that haven’t been seen in Italian drama for several years. The project has a strong focus on emotions and ethical values, and it aims to reconnect people to the past, allowing the audience to rediscover their roots. It stands out because of the editorial choice to put these elements at the forefront of the drama. Additionally, it has an outstanding cast, a modern script and stylish visuals.

Why might the series appeal to international audiences?
Galbiati: The story is hyperlocal in some ways, but it addresses universal themes and issues. In a scripted market where barriers are being removed, the production and editorial value of this series can be appreciated far beyond Italy, especially during a pandemic. La Sposa is an accelerated course in positivity and resilience.