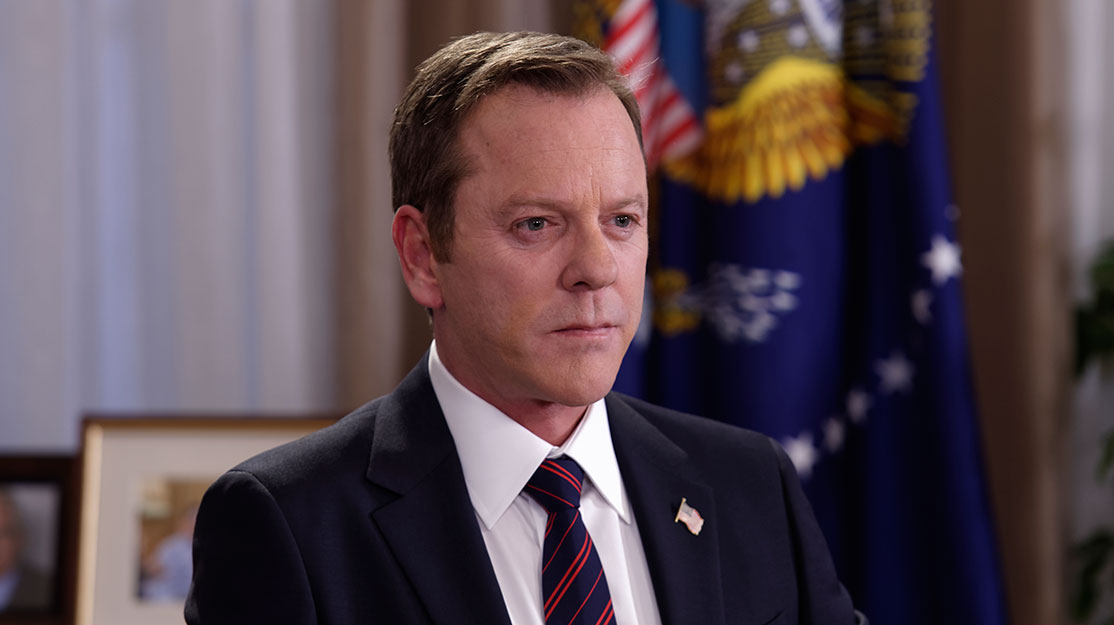 US star Kiefer Sutherland reveals why he elected to play the president in US drama Designated Survivor and what he learned from working on 24.

Best known for saving the day – and quite often the US president – in action drama 24, Kiefer Sutherland still finds himself spending plenty of time in the Oval Office.

Only now he plays the president as the star of ABC drama Designated Survivor. The political series sees Sutherland’s Tom Kirkman, the US secretary of housing and urban development, rapidly promoted to become the leader of the free world after an explosion during the State of the Union address claims the lives of the incumbent and all other members of the US cabinet.

The drama, from creator David Guggenheim and producer Mark Gordon, debuted last September to more than 10 million viewers and a week later, it was handed a full season order of 22 episodes for the 2016/17 season.

It also airs on CTV in Canada and around the world on Netflix following deals with distributor Entertainment One (eOne).

Sutherland has built his career across television and film, with big-screen credits including Stand By Me, The Lost Boys, A Few Good Men and A Time to Kill. So when he gave a keynote address at television industry event Mipcom, DQ was in the audience to hear more from the London-born Canadian actor.

Sutherland hadn’t planned on joining another network drama…
My experience on 24 was the greatest experience I’ve had as an actor. Having done a lot of smaller movies that no one ever saw, I remembered it was nice to have people watch what you do and enjoy it. So I was so grateful for that. Having said that, it was nine years, anywhere between 12 and 15 hours a day, five days a week, 10 months a year – it’s a lot of work, so when I did 24 I wasn’t aware of any of that.
When I agreed to do Designated Survivor, I was completely aware of that. So it was a big decision and when I first got the script, it was sent to me by Mark Gordon. We’ve been friends for 20 years and I was doing a film with Michelle Pfeiffer, a very small picture. I was getting into some music things, and taking on the responsibility of a television show was not in the forefront of my mind.

But his attitude changed when he read the pilot script…
I was going to give it what I call a cursory read – I was going to read it really quickly to gain enough information about the script to explain to Mark why I couldn’t do it. And I got to about page 25 and I went, “Fuck.” I knew I was potentially holding what I was going to be doing for 10 years if I was lucky, and I went back and re-read it. But the opposite thing happened – I got to the end almost praying it stayed as good as it was and David Guggenheim really wrote a script that spoke to me.

The actor could see similarities between Jack Bauer and Tom Kirkman…
It wasn’t until I actually started performing the character that I realised there was a real similarity to Jack Bauer I had not anticipated. Their skill set is very different. President Tom Kirkman probably doesn’t know how to load a gun, let alone shoot it. But the fact is both characters have a desire to serve and both characters are willing to take on a fight they know they can’t possibly win. That through line in both characters is something I obviously really relate to. I would like to aspire to be one of those people. It ended up being something that I knew if I chose not to do it for a lot of very reasonable reasons, I would really regret it. I do not regret the decision [to sign up] for a second.

Tom Kirkman was inspired by Franklin D Roosevelt, because Abraham Lincoln “would have been too obvious…”
One of the nice things about the character is he’s not even elected, he’s not even an elected member of the cabinet. He’s an architect who had very specific ideas about urban planning and affordable housing across the country and that’s how he became part of the cabinet. So he had no political aspirations. What is nice about this character is he can approach the country’s issues, domestic and abroad, with common sense and a sense of fairness and what he thinks is right or wrong, as opposed to a political agenda that’s been dictated by three years of campaigning. That is a really fresh point of view. Common sense is the foundation of the character, and when he becomes more political, that’s when he starts to make mistakes and that will be a constant thread in the character throughout the whole show.

As an exec producer of Designated Survivor, he sees himself as the show’s ambassador…
I was an exec producer on 24 as well and Joel Surnow [the creator of 24] taught me something: the writers had all the offices on the second floor of the stage where we shot, we never went up there and they never came down. As I’m experiencing on this show, that was very unique. I once asked Joel, “Why don’t you ever come down?” He said it was because he hired the people he wanted to do what they’re doing and he didn’t have to oversee everything because he hired the people that he really wanted to do it. It’s a really valuable lesson. Mark is the producer of this show; I work as an ambassador because of the amount of actors we do have coming in and out of the show. I try to make sure they’re comfortable if they’re having a problem with part of the script, I’ll try to work it out with them or direct them to who else to talk to. That’s really my role. I’m certainly not sitting in budget meetings or things like that.

The biggest problem on 24 was also the ‘star’ of the show…
When I first read this script [for Designated Survivor], as much as I was moved by the characters, I had learned a lot from 24 about what would potentially make the show great and what would not. 24’s real -ime aspect, which was in my opinion the real star of the show, was also a problem. We would paint ourselves into a corner in the storyline and it was almost every year, right around episode 14 or 15 and we’d have to do something wonky to get around it, but we’d make up for it in the last eight episodes. It was something we really had difficulty every year navigating and I think Howard Gordon would be the first to acknowledge that.

But Designated Survivor was designed to avoid those same challenges…
It was designed to never get caught in that position. This show works on three different prongs. So you have a terrorist attack and an FBI investigation into who did this attack and what would be the appropriate response – that’s the thriller aspect of the show. Then you have a family drama, of what happens to a family that is split up, or is moved into the White House overnight. What does that do to the dynamic of his marriage, how does it affect how he interacts and behaves with his children? That’s its own storyline. And there’s the political aspect – how do you stabilise the country after having its entire government wiped out? How do you rebuild the government and shore up the country on an international level?
Those are all things we’ll be dealing with throughout this first season. If at one point the political storyline is having difficulty, then all of a sudden the show can shift back to being a family drama for two episodes and giving a reason for the political thing to take over. It’s the same with the investigation. So the fact that three storylines are living within the show, all at the same time, gives the writers incredible flexibility to also react to what the audience is enjoying about the show. For those reasons, the show has a flexibility that I think is stronger than anything I’ve been a part of so far.

Sutherland wasn’t sure he wanted to do television before 24 changed his mind…
When I took 24, I wasn’t very clear on how it all worked. I remember thinking I didn’t really want to do a television show – and of course it ended up becoming the greatest experience I’ve had as an actor. I seem to land in certain situations. If I manage to get out of my own way, things can work out and 24 was the great lesson for that for me.

He now believes the small screen is the most exciting medium in entertainment…
When I started working, there were five studios in the US and all five studios were making 50 to 60 movies a year. Now there are barely three studios in the US and they’re making about 15 movies a year. And if you’re going to do one of those movies, there’s a pretty good chance you’re going to be wearing tights and a cape! So all of the movies I loved watching when I was a kid – whether it was The Godfather, Lawrence of Arabia, Serpico, The French Connection, Ordinary People, Terms of Endearment – those movies aren’t really getting made the way they were and that drama, that kind of storytelling has been absorbed by television, whether it’s 24, The Sopranos, The Wire, Sex and the City or Game of Thrones. The list is endless and the fact we’ve moved from three channels to four channels to 500 channels, content is king – and for the writers who want to tell real drama, television is where it is at right now.