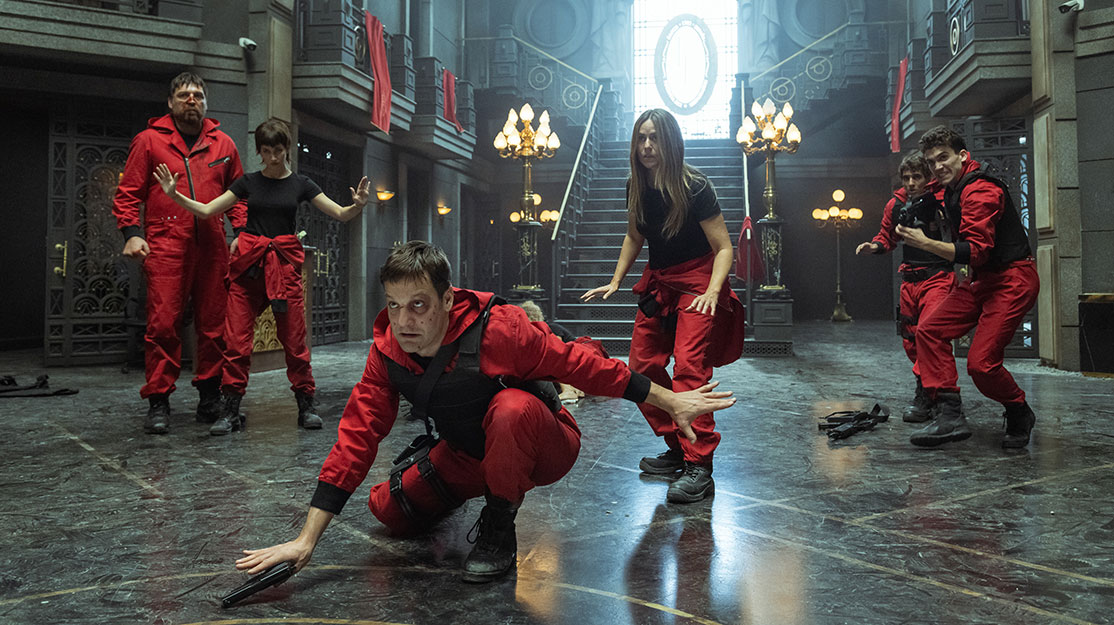 DQ takes a virtual trip to Netflix’s Tres Cantos studio on the outskirts of Madrid to get a look at the production process behind the hotly anticipated fifth and final season of Spanish series La Casa de Papel (Money Heist).

As the camera moves inside from a balmy Spanish evening into Netflix’s studio space, there can be no doubt about which show’s wardrobe is on display. Rows and rows of bright red jumpsuits with black trim line the walls, paired with the infamous Salvador Dalí masks that have immortalised Spanish drama series La Casa de Papel (Money Heist).

As confirmation, the wide grin and eye-catching moustache of Croatian actor Luka Peroš appear on screen as he reveals himself as the host of this very unusual set visit to Netflix’s Tres Cantos studio. At the time of the visit – held virtually – shooting is coming to an end on the fifth and final season of a show that began in 2017 and has helped put Spanish productions on the world map.

Originally launching on Antena 3 before it shot to international attention on Netflix, Money Heist introduced the mysterious Professor (Álvaro Morte) and his assembled gang of robbers – all given aliases named after cities – as they targeted the Royal Mint of Spain. Initially intended to be one story told across two parts, its worldwide success led Netflix to extend the drama further, with the gang returning in season three with a new heist targeting the Bank of Spain.

Produced by Pina’s Vancouver Media, the concluding fifth season – which will be released in two parts today [Sept 3] and on December 3 – picks up the story from the end of part four, with the crew still barricaded inside the bank after 100 hours, the Professor captured by police inspector Alicia Sierra (Najwa Nimri) and the army preparing to storm the building.

The aforementioned red jumpsuits are one of the elements that have remained constant across the show’s run, with costume designer Carlos Díez revealing he has not thrown out a single one. “We’ve kept all the characters’ costumes in case the writers decide to bring them back,” he says. “You never know when a character like Moscow [Agustin Ramos] will re-emerge in this show, and we have to be ready.”

But why red? And why the masks? Creator Álex Pina says they, like many elements of the show, are designed to be as iconic as possible. “We wanted to have something that would stand out and be memorable, first and foremost,” he explains. “As for the masks, it was between Salvador Dalí and Don Quixote – two mad Spanish geniuses. Those things – the red, the faces – are designed to give the show its own DNA and make it iconic in its own right. It’s the same with the music; we spent a month looking through songs to sum up the group before choosing Italian partisan song Bella Ciao.”

Five hundred jumpsuits were made for the beginning of season three, which was shot at the same time as season four. This created issues for the costume department, which had to prepare every piece in advance of shooting. In addition, a special one-off suit – the only one not designed and manufactured in Italy – had to be made for Sofia, a ferret used to give the authorities the slip in season three.

Covid-19 also caused headaches in the production process, says Díez. Shooting season five with social distancing meant every actor had to have at least eight jumpsuits, along with replicas that were, for example, dirty or bloody.

The red of the suits becomes even brighter when contrasted with the set, which has been created by art director Abdón Alcaniz to be as toned-down as possible. Despite being required to keep the set fairly grey and neo-expressionist, the crew have had their work cut out, with 40 people and three construction companies building five sets for the final season.

Corners have been cut with, for example, library book moulds used in the background of some scenes, but the crew never shy away from expending some extra effort to please the show’s fans. Apparently visible on the wall in some shots of this upcoming season is a portrait of now-deceased character Moscow.

Money Heist, says Alcaniz, brings set challenges like no other. In last year’s part four, he recalls, a huge shootout in the Bank of Spain left the heroes trapped in a lift while under fire. For a wide shot of the aftermath, Alcaniz was required to make the lift look as if it had been torn apart by gunfire – something he says is one of the most difficult illusions he has ever had to create.

Meanwhile, outdoing previous seasons has been small fry compared to the effect Covid-19 has had on the show’s production process. As confirmed by DQ’s inability to be on set in person, the pandemic still looms large. Indeed, the unpredictability of the situation meant filming on the last season almost had to end on episode two.

As director Jesús Colmenar puts it: “It was already hard enough to end the show without the pandemic. Netflix was very helpful with safe shooting but it’s been a really hard process.”

“I don’t even know how things are going to end up,” adds Morte. “It’s been an incredibly rewarding role for an actor, but it’s also exhausting getting into the mindset of a genius like him. My best memories of this show will be the team; it’s been really special. This is also a watershed series for Spain – it’s the first one for a long time that has inspired other producers and made the world sit up and take notice.”

One thing that has caught audience attention – and was also used to great effect in Game of Thrones – is the show’s willingness to kill off characters, most notably the shocking death of fan favourite Nairobi (Ágata Jiménez, played by Alba Flores) in season four. For Colmenar, however, these moments are necessary for viewer engagement.

“We didn’t want to make The A-Team, after all,” he says. “Characters dying is natural and more realistic than having good beat evil every time. Nairobi’s death affects the final season, too – her absence means the crew no longer has a heart. There’s a lot more direct confrontation coming up, something she would never have done.”

“We’re already seeing the consequences at the end of the fourth season,” adds Pina. “Her death gives the others a sense of fatalism but also serves as a call to action for what’s next.”

Nairobi was just one female character to be put firmly in the middle of the action, something not often seen in heist shows or films. Pina says he has always loved working with women, and the female characters’ agency is not going away in the final season. Stockholm (hostage-turned-accomplice Mónica Gaztambide, played by Esther Acebo) and Lisbon (former police inspector Raquel Murillo, played by Itziar Ituño) have both gone from outsiders in season one to fully fledged ‘atracadores’ at the end. Pina and Colmenar tease that both women have a big part to play in the final season, with a big twist on the cards.

Another twist that has kept viewers guessing since last year is how El Profesor is going to escape from the precarious situation in which he was last seen. With the character seemingly always one step ahead of the authorities, the last scene of season four showed him completely trapped for the first time, held at gunpoint in his own hideout by Sierra.

“We wanted to put him through the wringer this season,” says Pina. “He’s going to be uncomfortable and so are the viewers at times. We’re expanding all the characters’ stories so the audience knows them better. It’s interesting; one of the most popular characters is Berlin [Andrés de Fonollosa, played by Pedro Alonso], who is completely morally ambiguous. The characters’ dilemmas are even stronger this season, and all their story arcs are coming to an end.”

While viewers will find out more about the characters in the final season, fans of the show will be disappointed to hear Pina rule out any further expansion of the Money Heist universe beyond the original series. Too much is already known about Tokyo (Silene Oliveira, played by Úrsula Corberó), for example, to make a compelling spin-off show that would bring something new to the table.

After becoming the most watched non-English-language series on Netflix when seasons one and two launched on the streamer globally in 2018, Money Hiest has only increased in popularity, but both Pina and Colmenar feel it’s always better to quit while ahead and end with a bang. So what have they learned from creating and directing a heist show?

“It’s pretty difficult to write a character who’s an untold genius,” says Pina of the show’s central mastermind. “You have to get absolutely everything right, no plot holes. Apart from the exciting story, though, I’m really pleased by how strongly the theme of social justice comes through. The series began with Spain in a huge economic crisis and in the wake of the 15-M protests – an anti-austerity movement that lasted until 2015. Seasons one and two especially transferred that crisis to the screen and people made it their own in a sociological fight.”

“It’s taught me to be true to myself,” says Colmenar. “The show wasn’t immediately successful in Spain, but the world eventually paid attention, so be demanding and believe in what you think will work. We also did well to pick a heist for the theme. They’re their own genre. The viewer is expecting certain things like an ensemble cast and action, and that helps them get into the show. Once they’re inside, they find something for themselves.”