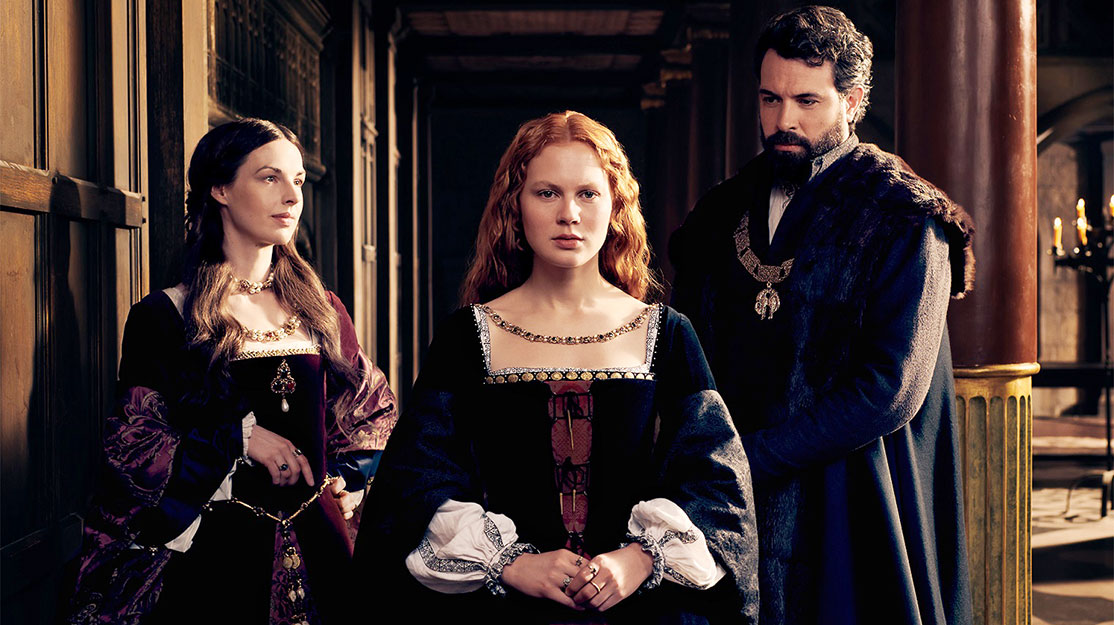 Becoming Elizabeth star Alicia von Rittberg and creator Anya Reiss take DQ back to 16th century England to discuss this new take on the formative years of a young girl who would become Queen Elizabeth I.

Depictions and portrayals of Queen Elizabeth I in film and television are as numerous as they are varied. The iconic monarch, known for portraits of her pale face and red hair, has been played on the big screen by Cate Blanchett in Elizabeth and Oscar-winning Judi Dench in Shakespeare in Love, while she has also appeared as a character in shows such as Doctor Who and The Tudors, and as a shrill, spoiled brat played by Miranda Richardson in Blackadder II.

Elizabeth now takes centre stage in Becoming Elizabeth, an eight-part series commissioned by US premium cable network Starz that charts the teenage years of the young princess in the wake of the death of her father, King Henry VIII.

But if there’s one person who didn’t want to make another stuffy costume drama, it’s series creator Anya Reiss. That much became clear when she was invited to meet producers The Forge and executive producer George Ormond, where she openly wondered why she was being considered for the project.

“I went into this meeting, he had this picture of Elizabeth I on the wall and I was like, ‘OK, you’re a fan,’” she recalls. “I kind of said, ‘I don’t know why you’re coming to me for a period drama because it’s just not something I ever thought I would do.’ I didn’t think it would suit my style of writing. He went, ‘Isn’t it cool to write the period drama you would watch?’”

That ethos quickly became Reiss’s guide through the series, which steered her away from simply finding a modern take on Elizabeth’s story and helping her to explore an entirely new perspective on the future monarch.

“Often period dramas that try to be accurate sometimes just feel like you’re led by the nose by the story, and our approach in this was to be led by the characters,” she tells DQ.

“Elizabeth, in this period, isn’t the decision maker, she’s in the background. It’s the Hamilton thing about being in the room where [the decisions] happen,” she says, with a nod to the Broadway and West End musical about one of America’s Founding Fathers. “I want to be outside the room where it happens because I think that’s actually a really interesting way to tell a story.

“The history of this time is amazing. It’s a proper, ‘And then what happened?’ There’s stuff you’ve read that you naturally want to do [in the series], but it’s very much trying to explore the world as well. It’s called Becoming Elizabeth but it is quite an ensemble show. Other people’s stories matter as much as hers, but it’s really interesting to approach something where the most famous person in the world is in the room, you just don’t know that yet, and dealing with the world that formed her.”

The series introduces the young Elizabeth Tudor, who is left an orphaned teenager following the death of King Henry VIII. Her mother, Anne Boleyn, was executed when she was just an infant.

The king’s death sees her nine-year-old half-brother Edward crowned and sets in motion a dangerous scramble for power amid the political machinations and sexual politics of the English court. Elizabeth, Edward and their half-sister Mary then find themselves as pawns in a game as the great families of England and the powers of Europe vie for control of the country.

Playing Elizabeth is German actor Alicia von Rittberg (Charité, Genius: Einstein), who says she fell in love with Reiss’s take on the girl who would be queen.

“Anya’s not trying to paint another portrait of a woman we know from the books, but she’s actually trying to understand how that young girl became that incredible female leader we know,” she says. “It’s a very human, very raw and honest coming-of-age story. In a way, you can’t believe it’s Elizabeth. It could be set in any environment – and then the political drama and the family drama kick in as well. It’s crazy how that story is as important today as it was years ago.”

Reiss is best known as a playwright but has television credits on series such as Ackley Bridge and EastEnders. Approaching a story that draws on historical figures and events, she wanted to rip up the rule book and remove the feeling of a processional march through history that can afflict similar shows.

In this series, “everything’s real, everything’s raw, everything’s interior. We’re approaching them as humans rather than as history,” she says. “I found that really exciting, the idea of flipping the story upside down.

“Everything is rooted in fact. Sometimes we’re filling in what might have happened, but the thing is with any history there’s a call you have to make. We don’t know what happened in those rooms. But there are some things we do know, and we try to keep those as tentpoles through it. I tried very hard to read the history, do my research and find out who that person was, find their core and understand them as people and use that as the guiding light, rather than saying, ‘This happened, we do that and we do that.’ I’m not inventing new things. Obviously it’s a take on a person but it is really rooted in fact. That, hopefully, is how we’re accurate, more than going, ‘She used to wear these kinds of shoes so we should show them.’”

If you know your history, it won’t be a surprise to learn that Elizabeth embarks on a rollercoaster of a journey through her teenage years, one largely out of her control, until she ascended the throne in 1558 aged 25.

“She is very unstable and insecure in the beginning as a 14-year-old would be having lost both her parents, falling in and out of favour, and with a younger brother and older sister as well,” von Rittberg explains. “It’s an incredibly dangerous world to her. She makes a lot of mistakes. She just learns and grows and becomes more confident in her opinion and her being, and that’s what makes it so modern as well. Now, talking about it, it could be you and me.”

Just as Elizabeth is flawed, so too is the ensemble of characters that populate the English court, from Mary (Romola Garai) and Edward (Oliver Zetterström) to Henry’s widow Catherine Parr (Jessica Raine) and Thomas Seymour (Tom Cullen), the new king’s uncle who quickly married widowed Catherine but soon takes an interest in Elizabeth. The Duke of Somerset (John Heffernan) also wastes no time in declaring himself Lord Protector, in effect head of state as Edward was a minor.

“It’s never black and white in the script. It’s never, ‘That bad sister’ or ‘Amazing brother.’ They’re all so full and rich, all of those characters,” says von Rittberg.

“That’s something I’ve always tried to do,” continues Reiss. “One thing I don’t like about period dramas is sometimes you do get the ‘heroes and villains’ thing. The thing I found exciting about this show was that they’re real people trapped in history. My opinion is there aren’t many heroes in history. There are some villains, obviously, but having a bit of nuance in your views of the past is important.”

The writer describes her own creative process as “chaotic.” “When I’m into it, I’m into it. I enjoy talking about it and it’s nice on a TV show how much development time you get,” she says. “I really enjoyed working with our producer, the other execs and our script editors, and we had other writers on this show. It can be quite lonely in the theatre and on this it was a very supportive way to do it. The actual writing happens at 2am in a panic.”

Reiss oversaw writing of the series with fellow scribes Suhayla El Bushra, Anna Jordan and Emily Ballou, who each penned an episode. In the writers’ room, “it’s just nice to talk about it and not be trapped in your head,” she notes. “It also helps to flesh out the people in it because you spend a a lot of time finding those richer, wider stories, rather than it just be, ‘This is the history that happens, that’s episode one. Episode two is that year…’ We also slow down when we want to slow down – that’s the nice thing about longform TV, you can just take a breath. Episode three is mainly at her birthday party.”

For her own preparation, von Rittberg had to work on her accent while also learning to ride a horse and play the piano. “I felt very blessed I was allowed to have half a drama school education before we started filming,” she says. The actor also read English literature, spent time with the scripts and carried out her own research into the real monarch.

“I loved it. It was literally like diving into a different world,” says von Rittberg, who reveals the sets were all lit by candlelight. “It was as realistic as it gets. I was wearing six different layers [of costume], it took ages to get in and out. I actually had red hair. It all got quite real. All of that was brilliant, and in terms of emotion, it was all in the script and all in remembering how it felt to grow up. It felt quite real. That’s what we tried to achieve as well, to make it as raw, realistic and honest as possible and not be distracted by the period.”

Following its world premiere at French television festival Series Mania earlier this year, Becoming Elizabeth debuts this Sunday on Starz in the US and internationally on Starzplay. Reiss needs no reminder of how long the series, which was several years in the making, has taken to produce, having discovered she was pregnant after that first meeting with Ormond. She now has a four-year-old son.

For viewers who turn off at the sight of period costume, it should bring them comfort to know Riess is behind the series. “I’m trying to write a period drama I would want to watch,” she says.

“We’ve always said that the show should work in modern costumes without the amazing sets,” adds von Rittberg. “That’s how contemporary and important it should feel. The story is as relevant today as it was then.”